The southern Ohio woods were beginning to wake up. Though we had yet to hear a bird fire off on any of the nearby ridges, Bob Fulcher — hunt host, NWTF volunteer, founder of Shadetree Callers custom calls and 2017 Grand National Callmaker of the Year — was prepping an array of calls for what we hoped would be a morning conversation with an interested gobbler.

I had met Fulcher through his Ability Hunt for wounded veterans and his involvement at the Custom Callmaking Competition at the NWTF Convention and Sport Show. And, though we had shared a few conversations about the NWTF over the years, he and I had never shared the turkey woods before.

After some light tree yelps on one of his signature trough calls and not hearing even a cluck or faint gobble, Fulcher and I knew we would be in for a tough day of hunting, but a great day for a walk in the woods. 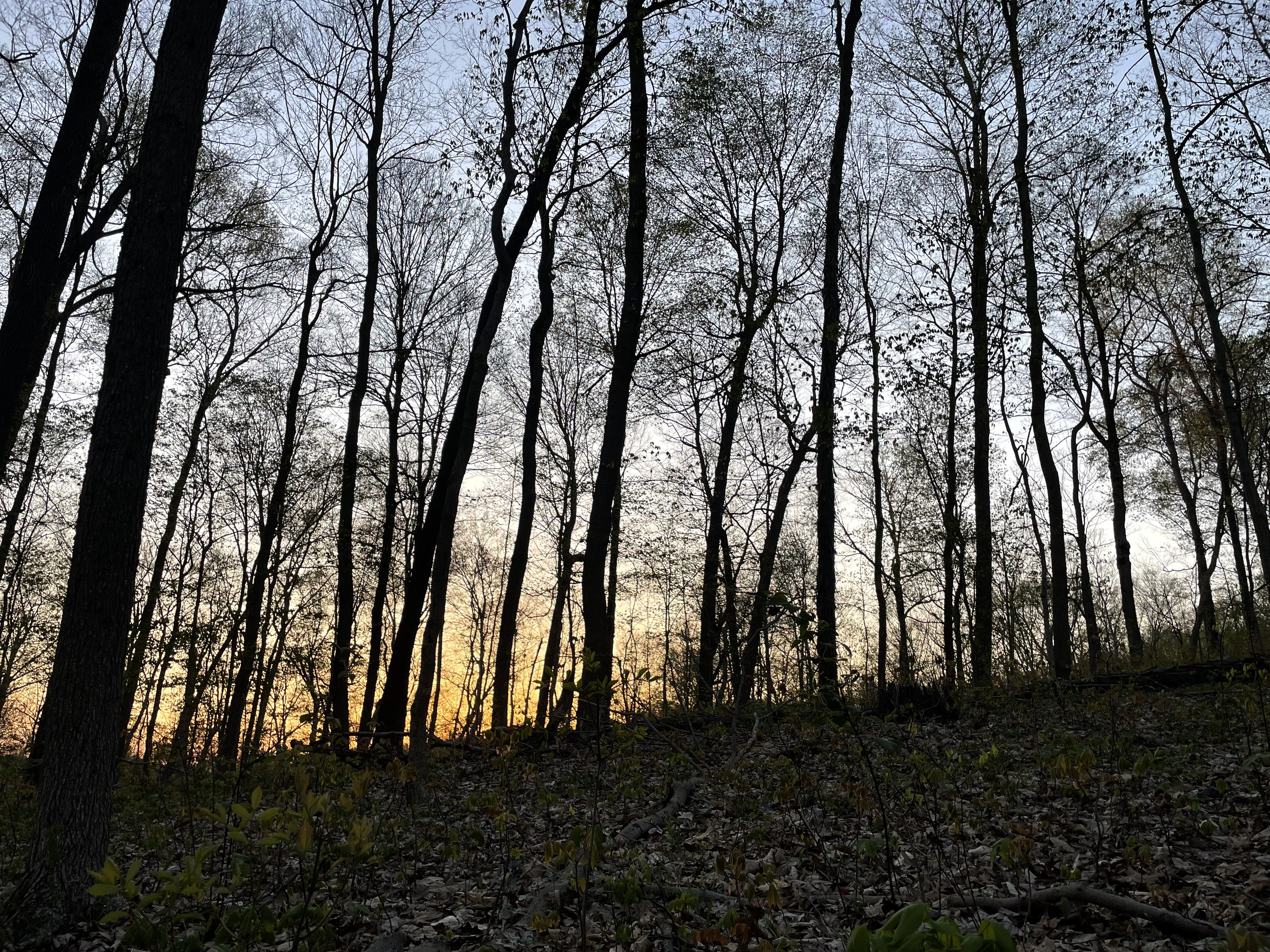 Of course, turkey hunters hit the woods in the spring for a chance at bagging one of our revered birds, but there is far more to it.

“The best thing about spring turkey hunting to me is watching all the new life coming up,” Fulcher said. “[I enjoy] seeing the mayapples and morel mushrooms poking up through the leaf litter or seeing the new blooms of the redbud and dogwood trees. And, you can hear a marked difference in the songs that the returning birds are singing each morning. Everything is fresh and new once again.” 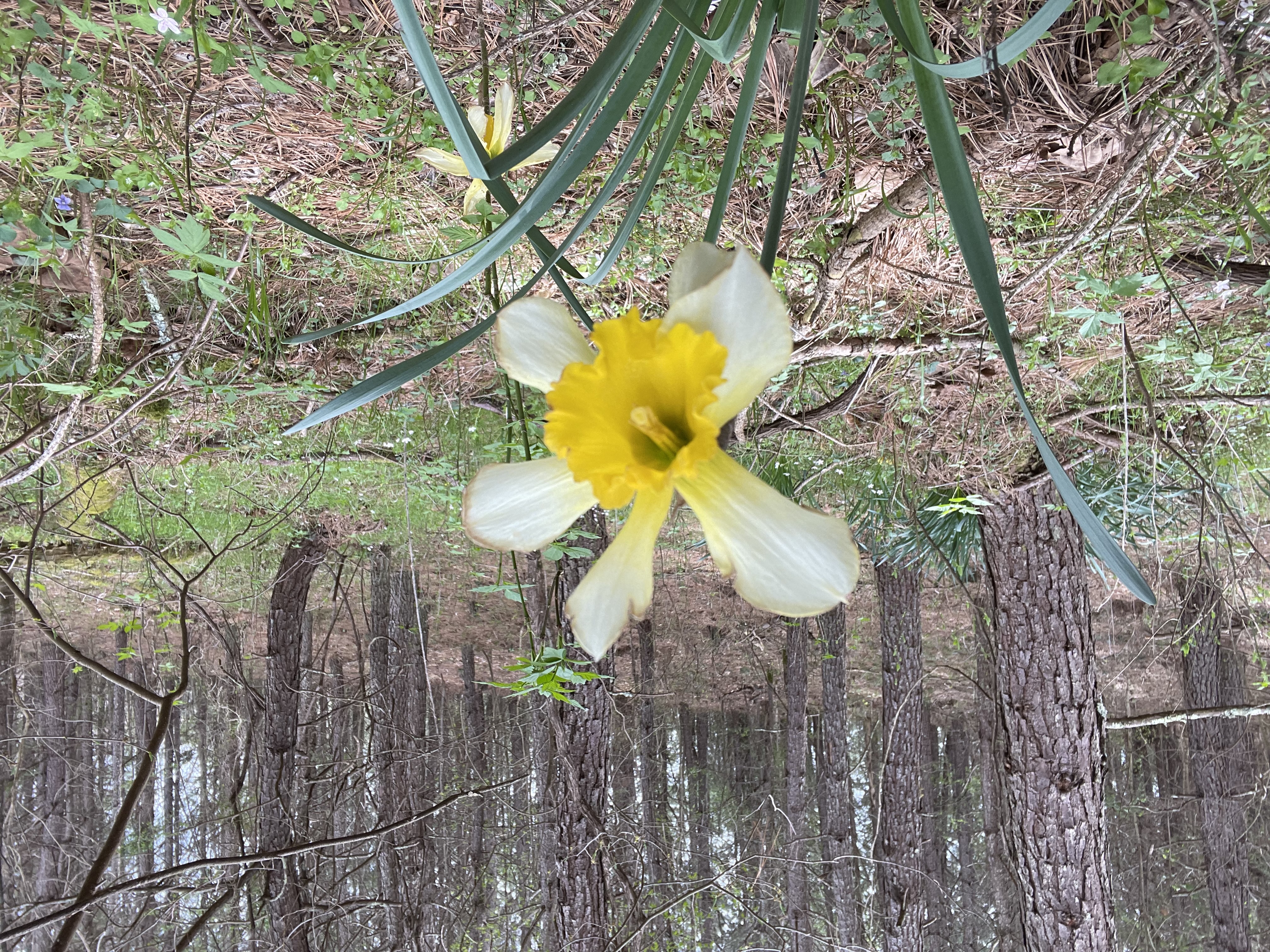 Still, with no response from a bird, Fulcher retrieved his one of his award-winning long-box calls from his vest, a line of his calls dubbed the “Fat Bottom Girl” by fellow call maker Scott Basehore. This call was crafted from butternut and snakewood, a prized hardwood with grain reminiscent of a turkey’s tail feathers. The design was perfect for making higher-pitched calls that reached out farther into the woods on our brisk morning, which gave us hope of garnering a return call.

The same year that Fulcher took top honors in the custom call making competition in Nashville with his long box, he won Best of Show and Best of Class in the Gibson Box Call Division. He also won 1st place in the scratch box and trough calls.

With no turkey activity in the beautiful hardwood bottom, where Fulcher and I had started in the morning, we opted to work the property slowly. As we made our way to our next stop, Fulcher reminisced on many a hunt from his 20 years of guiding.

“I have always enjoyed watching other hunters be successful in the woods,” he said. “Especially when it involves youth hunters, veterans or new hunters. This led me to become a professional guide. It allows me to be a bigger part of the hunt. There are a whole range of emotions involved in those hunts. But, my favorite thing to do, by far, is to be looking over someone's shoulder next to a big tree when they pull the trigger on an approaching gobbler. It almost feels as if I am the one taking the shot.”

Sentiments like this are not uncommon in the ranks of turkey hunters. Simply being elated to watch someone else take a bird is the mentality that will indeed help preserve our hunting heritage.

As we worked our way up an access road to the top of the property, Fulcher pointed out other wildlife and spots where previous hunters had taken turkeys. We marveled at the rolling hills that dominated the landscape and the uniqueness of hunting turkeys in southern Ohio. 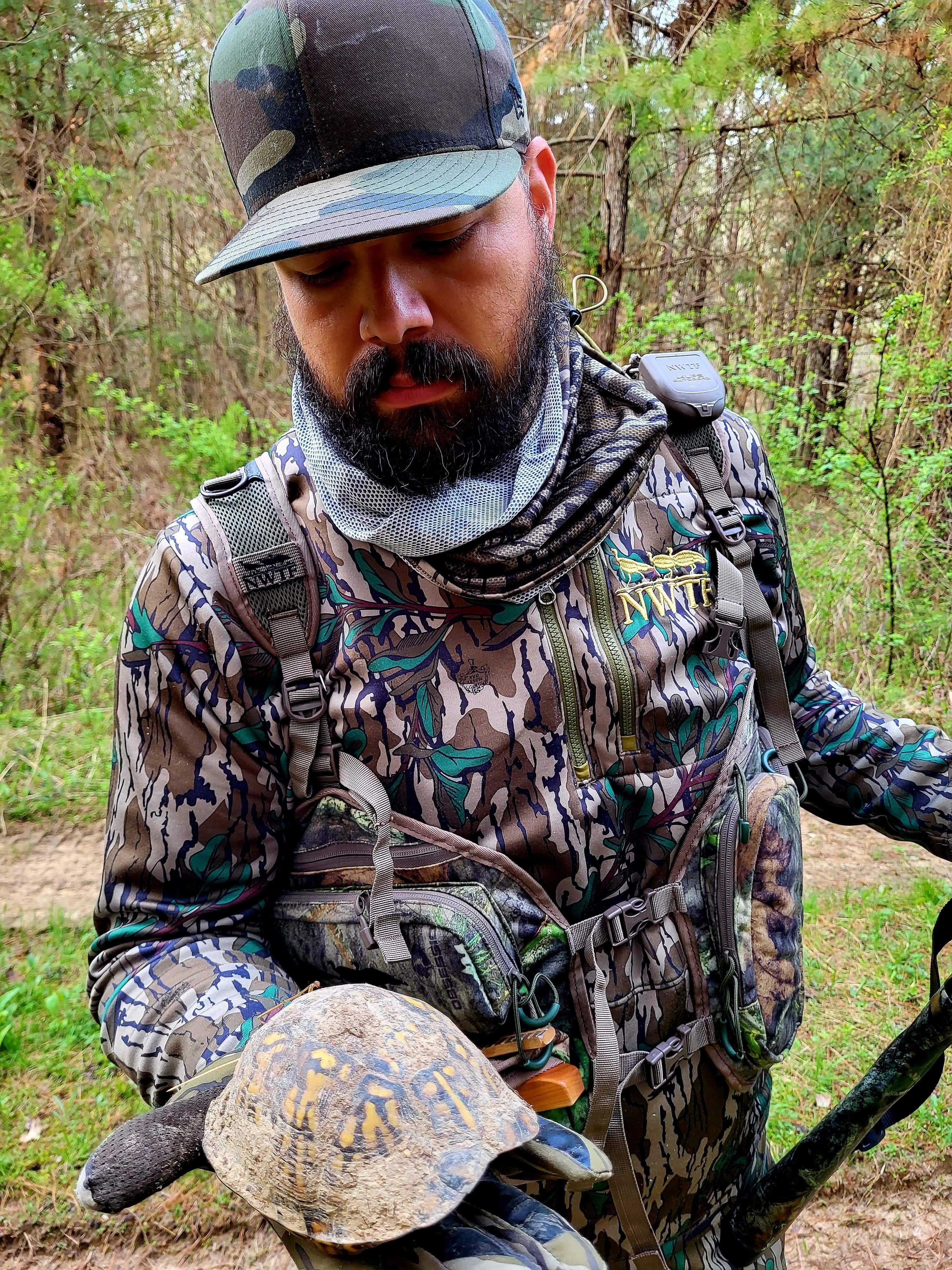 “It can be challenging at times because a gobbler can seem to be much further away than he really is because of the rolling terrain, especially when the trees are leafed out,” Fulcher said. “However, the hills can afford a hunter the opportunity to move on a gobbling tom to get himself closer in range before setting up. And I prefer to choose a setup where a turkey must crest the small rise in front of me where he will be in range as soon as I see him. This prevents a turkey from hanging up because he can see a long distance and not locate the source of the hen yelps he is hearing.”

With some miles on the boots, we set up on a rise overlooking a large field. The birds had still been silent this morning, but we hoped that we could catch a bird strutting in the sunshine.

Sitting under the shade of one of the native oaks, Fulcher and I discussed how the state of Ohio had just changed the bag limit of spring turkeys from two down to one in an effort to better manage the turkey population. Similar to many turkey hunters, we talked about what needs to happen if our love of the spring pursuit is to live on. Fulcher was adamant that the NWTF was a necessary component to any wild turkey management.

“I believe that the wild turkey would not have recovered to the point that it had without all the dedicated help from our organization, and I can say that there is not one day in my life that does not involve the NWTF in some way,” Fulcher said. “From banquet and event planning, to mentoring a child or wounded veteran, I have been a dedicated volunteer for almost 30 years now.”

And beyond general volunteer work, Fulcher is doing what he can to help support the mission by donating calls that are used to generate crucial funding. In fact, his donations have helped him achieve the level of Diamond Heritage Sponsor with the NWTF.

The sun was now higher in the sky, yet still more than an hour off from the noon stoppage time for the early part of Ohio’s spring turkey season, when Fulcher and I had our light nap interrupted by a far-off gobble. We quickly gathered our belongings, and with some calls from the long-box, we sparked a few follow-up return gobbles.

The game was on.

We made a quick adjustment to our position, and no more than 20 minutes later, we had three birds circling us well within range. Not wanting the morning to end, we watched the birds gobble to every light yelp and purr thrown their way. And then, finally, it was time for the morning hunt to come to an end. 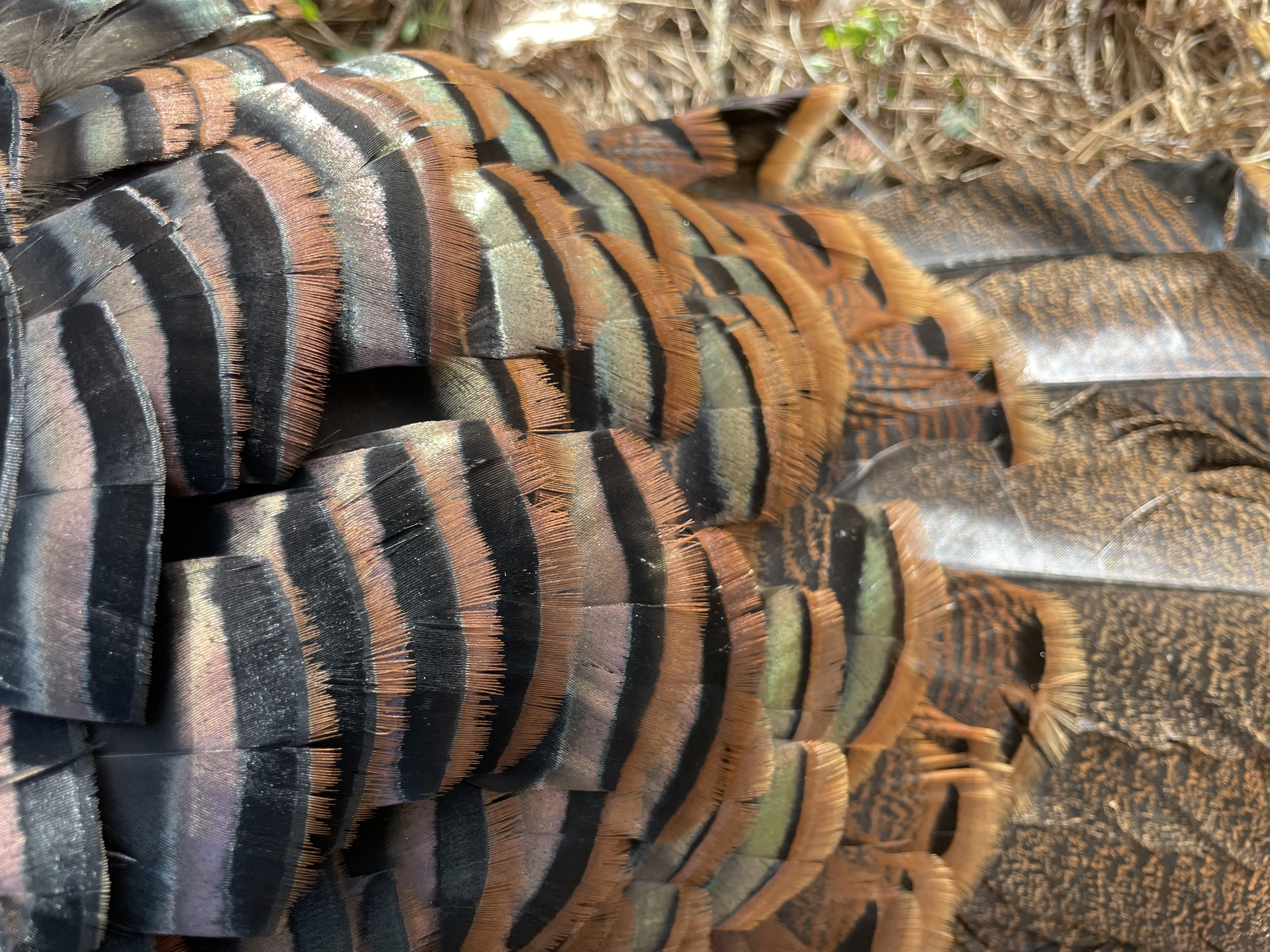 Just as with any hunt, Fulcher and I relived it for the next few minutes, sharing what was going on in our minds, marveling at the beauty of the wild turkey, snapping a few photos and finally packing up our calls and stuffing the turkey in the back of my vest.

On our walk out of the woods, Fulcher presented me with a short box call stylistically similar to his award-winning long box but made from black limba and bloodwood. Unbeknownst to me, he had used it periodically during the day, even using it some leading up to my harvest of the bird. 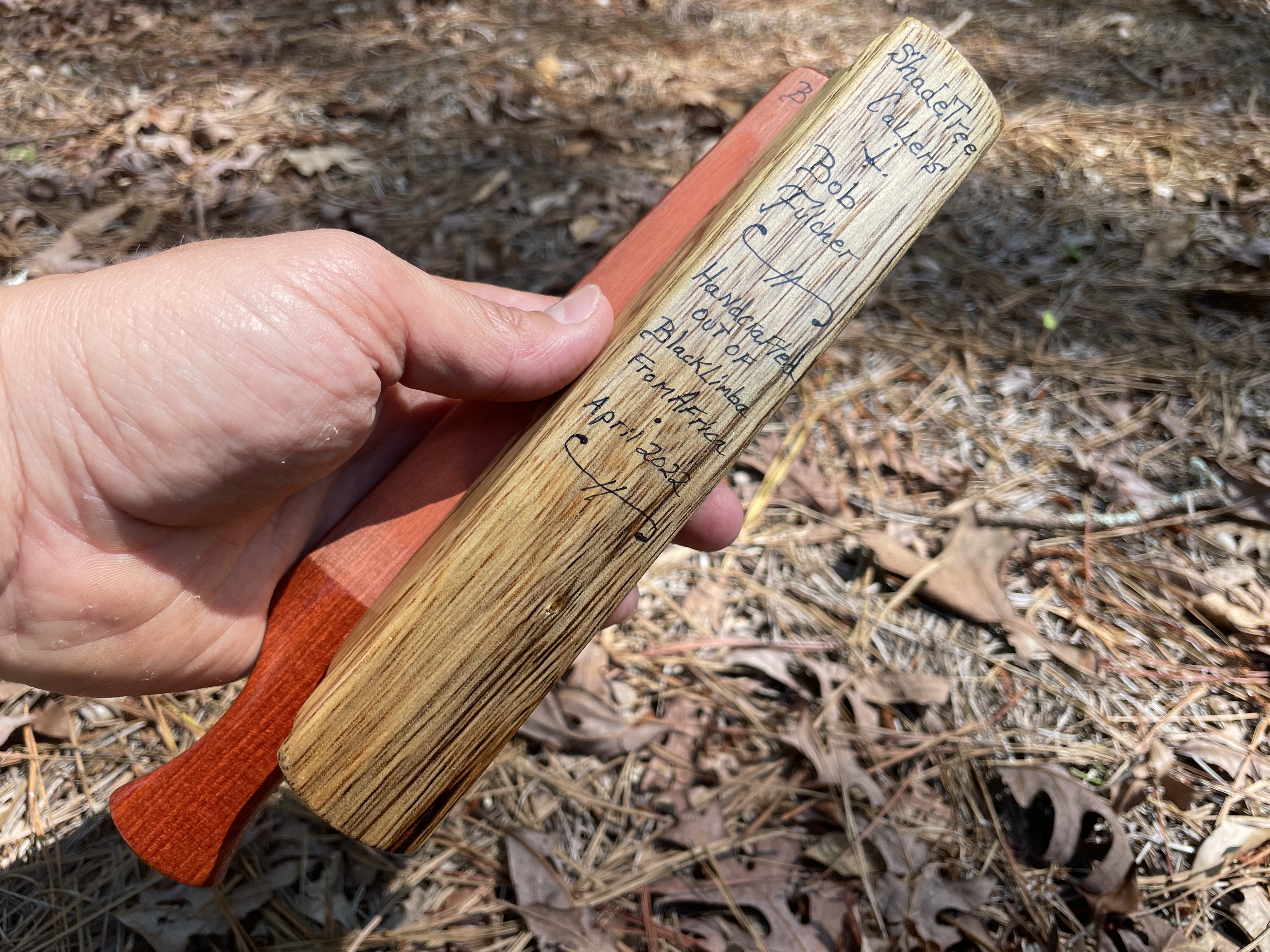 “A part of my soul gets to hunt with you every time you take this call to the woods,” he said.

It was a wonderful way to close out a great morning with a new friend: the walk in the woods and the box call from Fulcher were a gift in themselves, much like the hunt. That opportunity is something I look forward to passing on to my kids, and I know Fulcher won’t stop his efforts to benefit the NWTF.

“I look forward to doing everything I can for the conservation of the wild turkey so that we and future generations may enjoy hunting our grand bird,” he said.