Are .410 Shotguns Ready For Turkey Hunting?

Federal Premium’s new turkey load for 2018 — Heavyweight TSS No. 9 in .410 bore — is certainly up for the task for taking a wild turkey at 40 yards. However, the question that will weigh on many turkey hunters’ minds is which .410 shotgun is best to use for turkey hunting?

Tungsten Super Shot (TSS) is an incredibly dense shot that has taken the handloading world by storm in recent years, and it’s an integral part of Federal Premium’s HEAVYWEIGHT TSS and 3rd Degree loads. When developing the new shotshells for 2018, Federal Premium’s engineers set out to create loads using small TSS pellets in .410 bore that would rival what handloaders have achieved. This task resulted in a 3-inch .410 load with a 13/16 ounce of No. 9 shot that uses a specialized, full-length wad designed to prevent direct contact of the super-hard TSS with the barrel.

The material is 56 percent denser than lead. This means a No. 9 HEAVYWEIGHT TSS pellet carries at least as much penetration energy as a No. 5 lead pellet at all ranges. Because of this, Federal Premium was able to increase the pellet count of a payload by using a smaller shot size, while improving penetration due to greater pellet density.

A 13/16-ounce load of No. 9 TSS has about 295 pellets. When engineers tested the loads at the Federal Premium factory using a shotgun with a 24.5-inch barrel and fixed full choke, they averaged 125 to 150 pellets in a 10-inch circle at 40 yards. These numbers are capable of killing a wild turkey, and even rival the numbers produced by some 12-gauge turkey guns using No. 4 or No. 5 lead loads.

Test results also showed more than 3 inches of penetration in ballistic gel and deep dents, with a few pellets even busting completely through a thin sheet of steel at 40 yards. Heavyweight TSS .410 bore loads definitely have the patterns, down-range energy and penetration at 40 yards to be effective at killing wild turkeys. 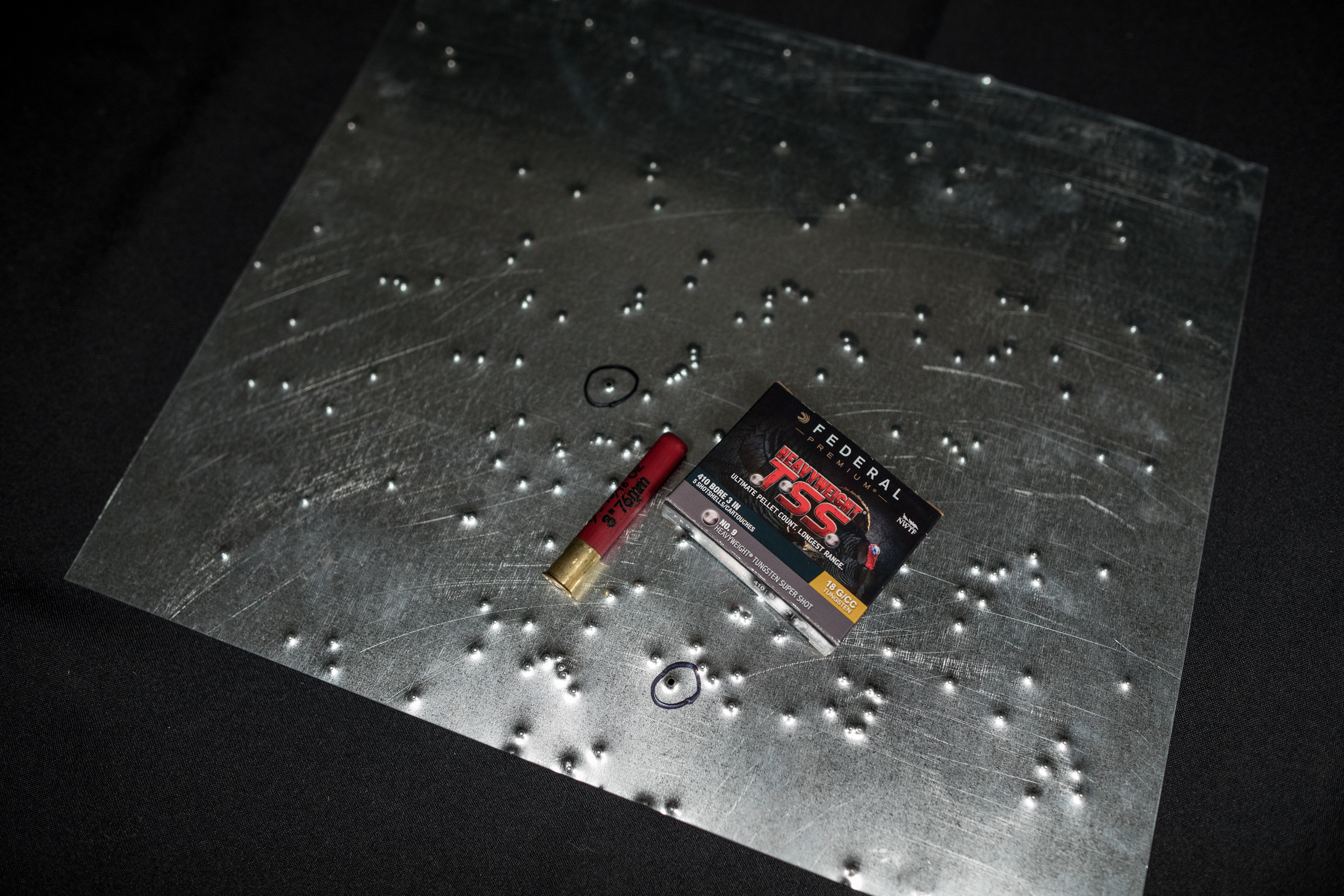 So, the ammo can do its job, but what about the shotgun?

For a turkey hunter, an ideal shotgun will have the capability to screw-in an extra-full turkey choke for an ultra-dense pattern. The shotgun should also have an adjustable aiming system to pinpoint the densest pattern in the center of the kill zone — the middle of the turkey’s neck just above the waddles.

Today’s shotgun manufacturers aren’t currently offering a dedicated turkey gun in .410 bore. There are many .410 shotgun options on the market, but they typically have a fixed full choke and single- or double-bead aiming sight that is not ideal for turkey hunting. These scatterguns were designed with wing-shooting in mind. They were not intended for still-shooting at the head of a wild turkey that is the size of a tennis ball. It is quite difficult to aim at a wild turkey target with the large brass bead on most .410 shotguns. The size of the bead can completely cover the turkey’s head at 40 yards.

To clarify, .410 bore shotguns with fixed full chokes will work, but their sight systems — bare beads — simply are not the best at precise still-target shooting. This means the shooter will need to practice and know where their gun is shooting to hit the center of the target before entering the turkey woods.

For example, a hunter who tested various .410 fixed-full-choke shotguns found all his shots were low and to the left at the distances of 25, 30 and 40 yards. He adjusted his point of aim by holding high right to hit the center target. This worked well when shooting paper targets. But, remembering to hold high-right in the woods can prove to be difficult when adrenaline is high and the heart is beating.

A shotgun equipped with a rear sight, such as an adjustable peep sight or rifle sight, is better. The capability to install a small scope base to mount a red dot would also be good. With an adjustable sight or red dot, the shooter can dial in the point of impact. This isn’t easy with today’s .410 shotgun options.

To add a sight system, a shotgun typically needs to be drilled and tapped for a scope base to add a red dot sight. Or, the firearm needs a vented rib to add a scope base adaptor or after-market sight that affixes to the vented rib. It is difficult — or even impossible — to add a sight system if the shotguns don’t have these features. Currently, an after-market saddle mount or speed-bead mount that works on the thinner receiver of a .410 shotgun is nearly impossible to find.

Considering .410 guns currently on the market, select a shotgun with a vented rib such as a Mossberg 500 with fixed full choke. Remington and other brands might have some ventilated-rib shotgun options, too. These guns will produce good patterns at 40 yards. Because these guns will not be drilled and tapped for a scope base, consider installing a Hi-Viz Sight on the ventilated rib, such as the TriViz Turkey/Deer Sight Set, which is a set of both rear and front sights. Or, you could install a Rib-Rider Shotgun Mount from Aimtech Mounts and then install a Bushnell red dot sight.

For guns without a ventilated rib, a solution would be to go to a gunsmith and have them drill and tap the gun for a scope base to mount a red dot or other sight system. Good single-shot .410 shotguns, such as Stevens 301 or Henry, could work well, if drilled and tapped.

Current fixed-full shotguns will work well with Federal Premium Heavyweight TSS No. 9 .410 bore out to 40 yards when and if the shooter has the practice and skills to shoot that far with a bare-bead sight system. Manufacturers may produce dedicated .410 turkey shotguns, extra-full .410 bore chokes, and after-market bases, mounts and other sighting systems in the future. Time will tell, but it is certainly likely that manufacturers will step up and offer more .410 solutions for turkey hunters. 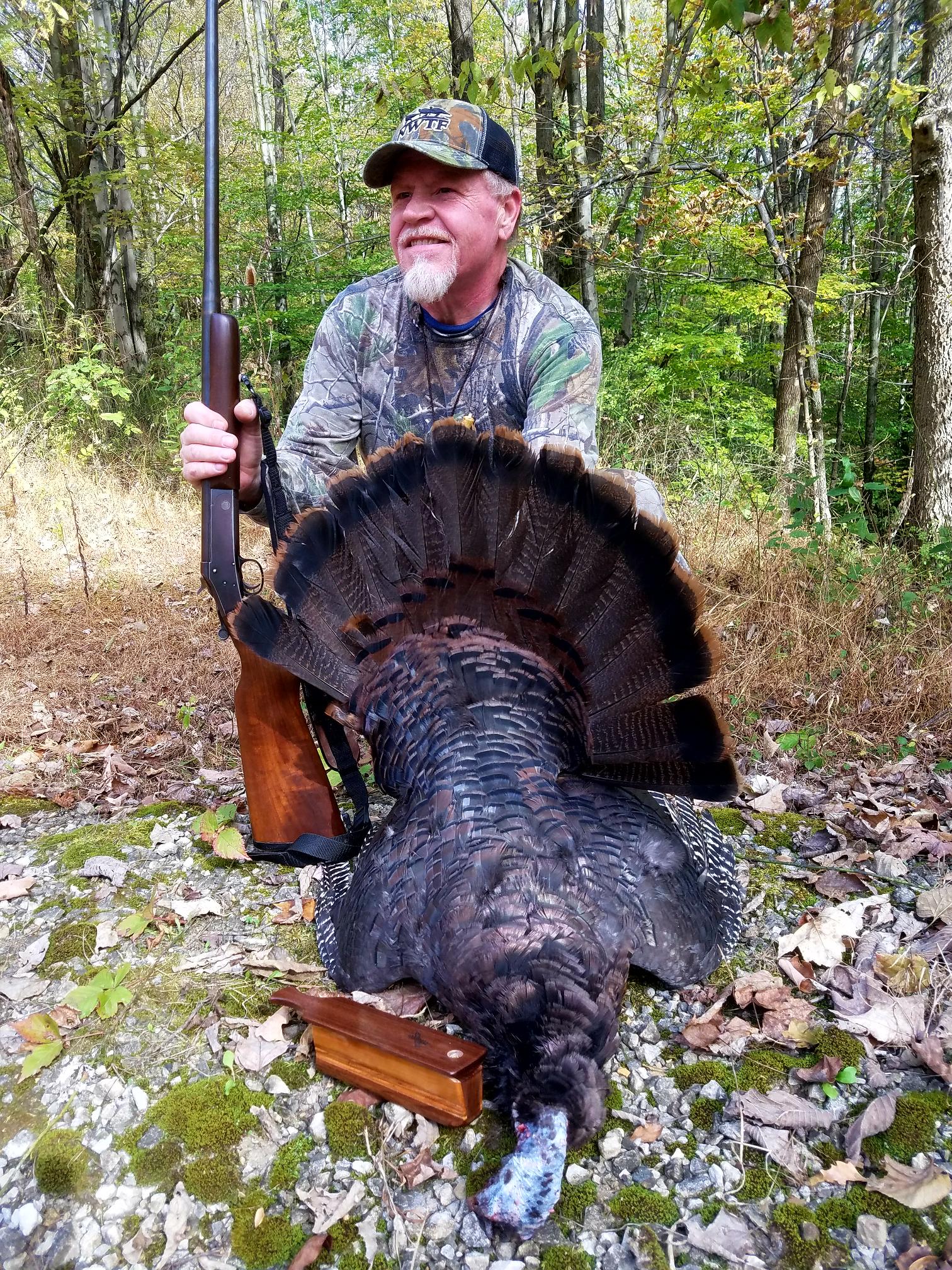