"While enjoying some tremendous success in west Texas this spring, we took two toms on the same property within about a half mile of each other. We noticed the barring on the wings were quite different and wondered what might have caused the difference on these Rios? Each leg with spur attached is above the respective wings and would guess one to be a solid 3-year-old and the other even older. We anxiously anticipate your words of wisdom (a wager will hopefully be resolved)." - Johnny J. Johnson. 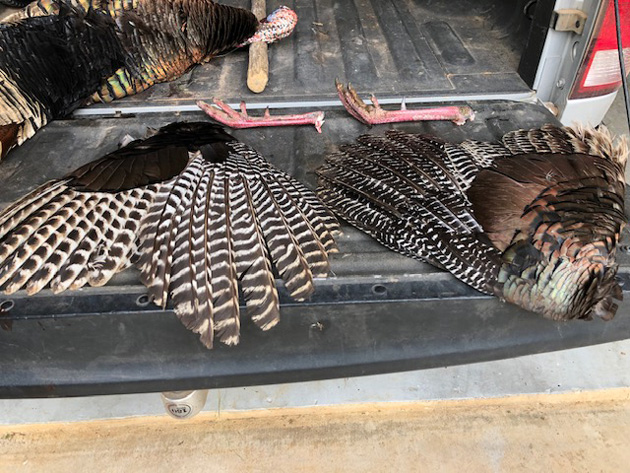 Thank you for emailing your question to Dr. Tom and for attaching photos of the wings from the two adult Rio Grande gobblers you two harvested in west Texas. The spur from the gobbler on the right is definitely longer than that of the other one, so there is likely an age difference. Your assessment that the younger one is probably a 3-year-old is on the mark judging by the length of the spur. So, we are starting with two fine gobblers taken on the same ranch within less than a mile of each other.

All that said, the colors of individual wild turkeys within each subspecies can vary to a degree. We observed differences when handling large numbers of live-trapped or harvested birds. Coloration is often uniform, but occasionally you see a bird with lighter tips on the retrices (major tail feathers) or upper tail covert feathers than you would expect. We also see variations on barring of the primaries and secondaries.

Feather coloration can be affected by heredity and by nutrition. Some abnormalities in primary wing feather barring are due to nutritional issues. Veterinarians even developed guidelines for growers to check wing feather barring on chickens and domestic turkeys in order to adjust feed mixtures. Nutritional issues usually appear on one or two of the primaries on each side rather than across all 10 primaries.

The two gobblers you had the good fortune to take last spring simply have different family lines. I would like to have seen a photo of the birds before they were processed, but it appears to me that minor variations within their Rio Grande ancestry is the answer.