I called this bird in last year for a good friend, and, to our surprise, both nasal passages were completely packed with earwax-looking gunk. The bird acted normal coming off the roost and strutted within 8 yards where my buddy shot him with his bow (outside of a blind). We did notice he was gobbling like a jake, but once he got closer, he was sporting a 10¼-inch beard. 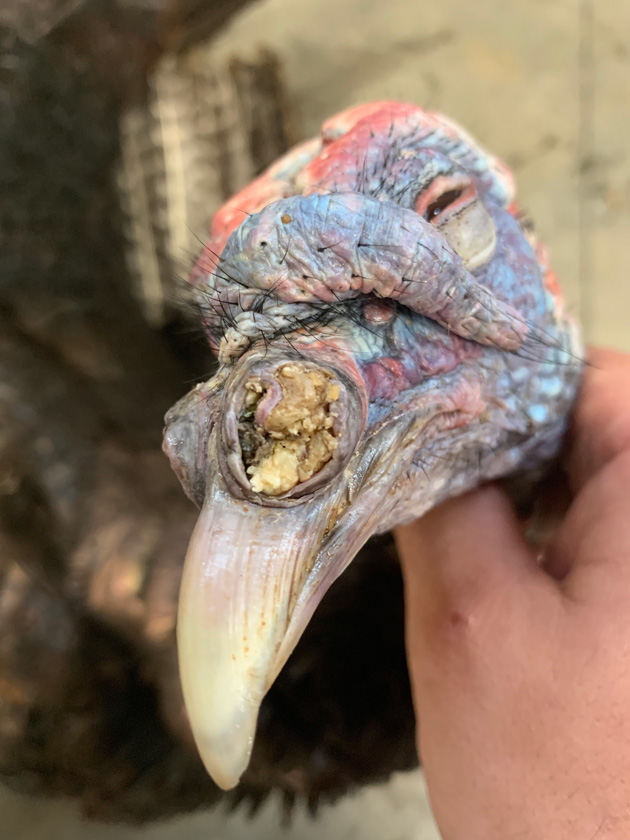 It is quite unusual to see a gobbler with swollen nares (the nostrils on the upper beak). The area around the upper beak looks swollen, but other than that, the bird appeared to be normal. Wild turkeys are tough birds and things that might keep us humans in bed don't phase them as much. They simply keep on doing what they need to do.

There are a number of things that can cause swelling near the beak and on the sides of a wild turkey’s head. This malady appeared to be confined to the nasal passages. I had a theory about the bird but also wanted to run it by a couple of wildlife pathologists. Wildlife pathologists are veterinarians that study wildlife diseases and parasites. I figured one of them might have seen something like this and run the necessary tests to determine the cause. Neither of them had even encountered this unique case, but they had theories that matched mine. Of course, without being able to handle and take samples from the gobbler, these are educated guesses!

The first possibility that all three of us thought of was an odd presentation of a case of avian pox. Avian pox is a viral infection that wild turkeys can get. It can be serious, but some birds only get mild cases. This bird was unaffected otherwise, so if it was pox, it was a real mild case. The second possibility is infectious sinusitis. That is simply an infection of the sinuses caused by bacteria or a virus.

Neither of these possibilities is a serious problem, and the bird appeared to be healthy except for the nares. He did not show any other lesions and was acting normally. In general, diseases of birds are not a threat to humans. There are exceptions, but neither of the possibilities we thought of would pose any issues for you.