If you’re like me, you’ve probably raced through turkey season and wondered, “What if?” Maybe you regretted a choice you made that might have created a better outcome if done differently.

For me, avoiding post-season regret is simple: Plan, and give it all you have.

I hunt turkeys more than anyone I know. I guide hunters for Florida Osceolas and other Grand Slam hunts throughout the country. That means I start the final weekend in February with Florida’s youth season and can go as late as the first week in June if I chase birds in New England. That equates to more than 50 successful hunts a year and countless other hunts to reach those 50, plus setting up another 100 or so successful do-it-yourself hunts for folks. All that time in the woods lets me figure out how to make it happen. 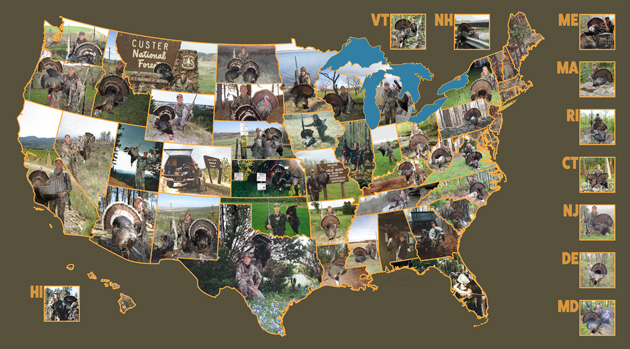 But the process begins much earlier. I call sources and plan turkey hunts daily throughout the year because I believe you can avoid mishaps if you plan properly. By planning, I mean I have a property lined up for a hunt and a backup property just in case. I practice with hunting tools and make sure they and other gear are cleaned and in good condition. I also catch up on chores and leave my house and family completely set up.

Everyone defines success differently. Some folks just want to go to hunting camp to get away from the hustle of real life. Others say they’re hardcore but then stay up late and sleep in. And some only hunt for a few hours in the morning and evening and wouldn’t think about being in the woods unless the weather was perfect.

Sometimes, your definition of success can change by the day. From the beginning of my Slam quests, my definition of success equaled birds in hand. That’s it. It didn’t matter if I got little to no sleep, had to hike or drive miles, ate cold dinners, slept in my truck and couldn’t socialize with other hunters at camp. Through the years, I’ve learned so much through my mistakes and have become a much better hunter. I don’t believe I sacrifice as much as before, but I get better, more consistent results because I hunt smarter.

Your pre-season planning and phone work is crucial, but when the rubber meets the road, you must put time in the woods to make it happen. Hopefully, you can always look back to determine how to make things better, but you’ll sleep soundly if you give it all you have for as long as possible while hunting. — Jeff Budz