In the spring of 2018, Adam Arnold, a young Certified Public Accountant, with a little fishing and target shooting experience, was on his way to Minter, Alabama, to attend the first turkey hunt of Alabama’s newly formed Adult Mentored Hunting (AMH) program. Despite hesitation from his friends and colleagues about him driving to a remote area to spend a weekend with complete strangers, he departed his home in Birmingham, Alabama, and embarked on a two-hour drive to an area in Dallas County in the heart of the Black Belt.

This property had recently been purchased by the Alabama Department of Conservation and Natural Resources and set aside as a Special Opportunity Area open to the public via random draw permits. Arnold applied for the AMH program after receiving an email from ADCNR explaining the program and inviting new and inexperienced hunters to apply. His name was on that email list thanks to having purchased a fishing license in the past. Arnold’s name was randomly selected from a pool of several hundred potential new hunters who had applied to participate in the AMH program. He had no way of knowing his selection would be the start of a new lifelong hobby that would bring him closer to the land, his family and his work colleagues. 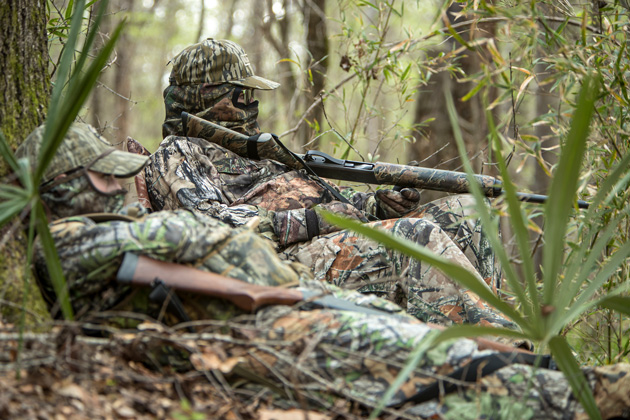 Upon arriving at a lodge near the SOA, the weekend started with time on the shooting range learning about firearm safety, shooting positions and shot placement. Being that Adam had owned a shotgun since his sophomore year of college and even spent time shooting competitively, he thought this part of the weekend would be a refresher. He quickly learned shooting from a seated position was much different than standing comfortably. After a few rounds, he got more comfortable and confident and was ready to shoot something other than paper targets.

After the range session, Chuck Sykes, director of Alabama Wildlife and Freshwater Fisheries, gave a presentation about wildlife management and the wildlife conservation funding model. The presentation helped Arnold and the other participants understand the important role hunting licenses play in the conservation funding model. Without hunters buying hunting licenses, hunting equipment, and firearms and ammunition, funding for conservation wouldn’t exist. Thanks to a national effort by state agencies and nongovernment organizations like the NWTF, folks like Arnold are finding opportunities to learn how to hunt and are taking a vested interest in the future of hunting and conservation. As if the presentation didn’t include enough reasons to support hunting, a delicious wild game dinner prepared by the mentors was next. The dinner had the participants eager to harvest wild game of their own. The end of the first day was capped off by calling demonstrations and practice time with new calls that were donated by the NWTF.

On the first day of hunting, Arnold was paired with Sykes as his mentor, and they teamed up with another participant/mentor duo and spent the first morning trying to find a willing gobbler. Throughout the morning, they only saw signs of turkeys and learned about turkey tracks, droppings and strut marks. They quickly learned enough to know turkey hunting wasn’t as easy as it looks on television. That afternoon, after a nice lunch break, they paired back up with the other group and tried a new spot. A few hen yelps from one of the mentors started a conversation with a nearby hen. Arnold was fascinated to see the interaction between the mentor’s calling and the hen’s responses to the calls. The group moved to another spot and, after spotting a gobbler, quickly set up in anticipation of the gobbler coming their way. Much to the group’s surprise, not one, but two longbeards came strutting and drumming across the field. Arnold said it felt like time slowed down and everything was happening in slow motion. Despite the adrenaline surge, as one of the birds neared the end of Arnold’s gun barrel, his mentor gave him the green light, and he was able to drop his bird with a well-placed shot. The other turkey hung around long enough for the other participant to harvest the gobbler. After much excitement, a few fist bumps and high-fives, they made their way to their birds.

With the experience still fresh in his mind and his adrenaline waning, the reality of the experience was starting to settle in for Arnold. He realized hunting was about so much more than the harvest; it was about the entire experience, and he was humbled to have the opportunity to cross paths with such a beautiful bird. The moment was documented with photos and videos that were shared that evening at hunting camp. 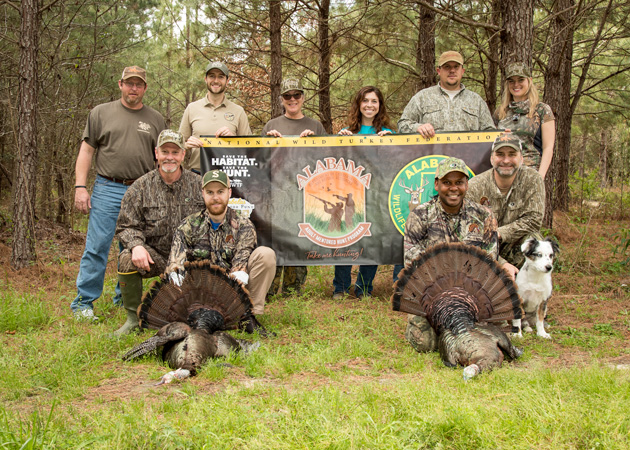 While none of the other groups harvested a turkey, they all had close encounters and came away with lifelong memories. The exchanging of those memories and stories after dinner that night play into the age-old tradition of reliving the hunt by the fire with friends and family. It was a great way to welcome the new hunters into the fold of our hunting heritage and connect them with something we all love so dearly. Before leaving for the weekend, Arnold and the other participants learned how to clean their turkeys and prepare them for the dinner table. It was the first game-cleaning experience of many for Arnold.

Since his first turkey hunt, Arnold has been turkey hunting on public land, small game and dove hunting on public land, and harvested his first buck and doe on a friend’s lease. A European mount now hangs in the kitchen where he is busy cooking up wild game and pouring over satellite images to find the perfect hunting spot on his local Wildlife Management Area. With over 750,000 acres of WMAs around the state of Alabama, he’ll have ample opportunities to keep chasing gobblers and whitetails. Access and knowledge will not limit Arnold’s ability to spend time enjoying his new passion. With luck, he will pass on this hunting heritage to friends and family with stories like his to help preserve the future of hunting for us all to continue to enjoy.