As nesting season transitions into the throws of summer, broods start showing up on the landscape. We all get excited to observe broods, as those poults are the future of our wild turkey flocks, and those hens are the precious ones that survived the gauntlet that is nesting season to ensure our future ability to enjoy seeing wild turkeys. But, the odds are stacked against those broods surviving, and recent collaborative research across the southeastern U.S. is showing that how broods move after hatching can have significant implications to their survival. Let’s discuss that research, but first, it’s important to understand why we should care about brood behaviors and potential links to survival.

Throughout broad areas of North America, wild turkey populations are exhibiting precipitous declines in productivity, as measured by poults observed per hen during summer brood surveys. There are two logical underlying reasons for this that are not mutually exclusive: Either fewer hens are hatching clutches, and/or fewer broods are surviving to the age that we typically observe them, which is often around mid-summer.

Nest success and brood survival are both driven by a complex set of factors, such as predation and weather. But unlike nests, which are tethered to a single spot on the landscape (the actual nest site), broods become mobile quickly after hatch. Therefore, how broods behave once they hatch has implications to their survival, and can enlighten us as to how we may better manage landscapes to improve brood success. 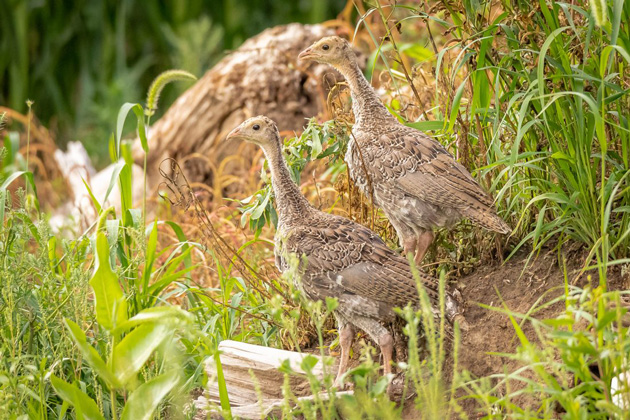 IT’S TOUGH BEING A TURKEY

As turkey hunters, we rarely think about how difficult it is to end up being that adult tom that comes to our calls. But when you look at the numbers, it’s sobering how difficult it is to even end up being a 1-month-old poult that we observe in the summer. Using data from hens monitored on multiple sites in Louisiana, Georgia and South Carolina, we found that about 80% of more than 400 hens initiated a nest, meaning about 80% actually started incubating a nest — the rest didn’t nest. Of those that did nest, 104 hatched (about 22%), but 10 of those broods were lost almost immediately after they hatched (the first day).

We monitored 94 broods for one month after they hatched, at which point the survival of individual poults is quite high because they are highly mobile, growing quickly and roosting with mom off the ground, which they actually begin doing two weeks after hatching. But of those 94 broods, only 36% survived their first month after hatching — the brood was considered successful if at least one poult survived that first month. If you do the math here, the take home is that only 7% of nests produced poults that survived the first month, so every poult we observe in the summer has truly defied the odds and made a remarkable journey!

A BROOD ON THE MOVE IS IN TROUBLE

Prior to and during incubation, hens work to synchronize the hatching dates of each egg so everyone hatches at the same time. Doing so ensures she can move the brood quickly away from the nest after they hatch because staying at that nest is risky business — hatching eggs and young poults attract attention. But is there a tradeoff, where moving too far too fast could be problematic? The short answer is yes, so let’s break that tradeoff down and discuss what it means to land managers.

Researchers have known for years that hens will move newly hatched poults away from nests quickly, and we found the same — on the order of about 200 yards away from the nest the day after hatching. Within three days after hatch, broods had moved about 800 yards on average away from nests, and this distance continued to increase as poults aged.

We also noted that broods didn’t roost in the same locations each night, but instead, separated roosts by at least 300 yards on consecutive nights. This last observation makes sense; don’t go back to the same spot each night and make your actions predictable to predators. But we also observed an important trend relative to movements after hatching and brood survival.

Moving too far, too fast can be trouble for newly hatched broods because a brood on the move has a greater chance of encountering predators. So, hens are in a balance game: Move only as far as you have to so that poults can forage in quality vegetation communities with lots of insects. We found that, on average, broods that traveled farther distances during the first three days after hatching had lower survival. But thereafter, there were generally no trends in survival relative to daily movements or habitat use. If you recall, broods moved an average of about 800 yards away from nests within three days after hatching, so these findings have important implications to managers and landowners trying to manage landscapes for wild turkeys.

We’ve all heard through the years, try to create and manage brood habitat close to nesting cover. Well, this hasn’t always been as easy as it sounded! Wild turkeys nest in a variety of areas, and we’ve found that it’s difficult, if not impossible, to predict whether nests will be successful based on the vegetation around them.

As noted earlier, we find that most nests fail, so finding patterns between vegetation and nest success has been fraught with challenges. But what we do know, with fair certainty, is what brood habitat looks like. I’m often asked, what constitutes brood habitat? To get a mental picture of what brood habitat looks like, go outside and lay down on your stomach — and then look around you. That’s what 3-day-old poults see as they navigate their environment. Now roll over on your back. This is what broods see when they look above them trying to detect aerial predators. Finally, squat on one knee. This is the environment as a brood hen sees it; if you can see around you with clarity, so can she. Collectively, if you can lay on your stomach and see in front of you, while also rolling on your back and seeing vegetation around you that allows you to sneak under it and hide, that’s also below the level of a hen’s head while she’s standing there watching for danger — well then, you’re in pretty decent brood habitat.

So, we’ve always heard that having brood habitat near denser nesting habitat is good for turkeys. But the findings outlined above provide more clarity, in that it appears that having brood cover well within 800 yards of nesting cover is desirable. One critical point to consider, is that maintaining brood cover often requires disturbance, whether that be prescribed fire in pine forests, maintenance and management of hardwood forests, or management of openings and early successional plant communities. The common thread is often disturbance to stimulate vegetation and promote diverse insect communities.

Obviously, how we disturb plant communities varies dramatically across landscapes, but the take home is, we must consider distance when trying to plan landscape management scenarios to benefit wild turkeys. If broods that have to travel farther suffer greater mortality, then it’s incumbent on us to look critically at how we manage the landscape, and seek ways to create and maintain diverse plant communities that can provide quality brood habitats distributed widely across our landscapes.