Using archery gear for strutters isn’t for the faint of heart, but these tips will help draw in birds.

I can practically still feel the adrenaline coursing through my veins from opening morning of Wis-consin’s 2021 time period A as two gobblers marched toward my decoys. At 20 yards and closing, the drumming sounded like a subwoofer. I subconsciously whispered, “Showtime,” or something along those lines.

The encounter underlined what separates archery and shotgun hunting. With the birds now flog-ging my decoy 8 yards away, it was a show most shotgun hunters end before it begins. Sure, I get my kicks from a gobbler doing his thing at 25-40 yards, but two of them beating up my decoys barely beyond spitting distance is second to nothing.

I held at full draw as the toms bullied my poor manmade bird. They were a blur. Finally, the strut-ter paused facing directly at me. My broadhead sliced his waddles, destroyed the vitals and exited his hip. He fluttered, then slumped mere paces from my still-bobbing jake decoy. 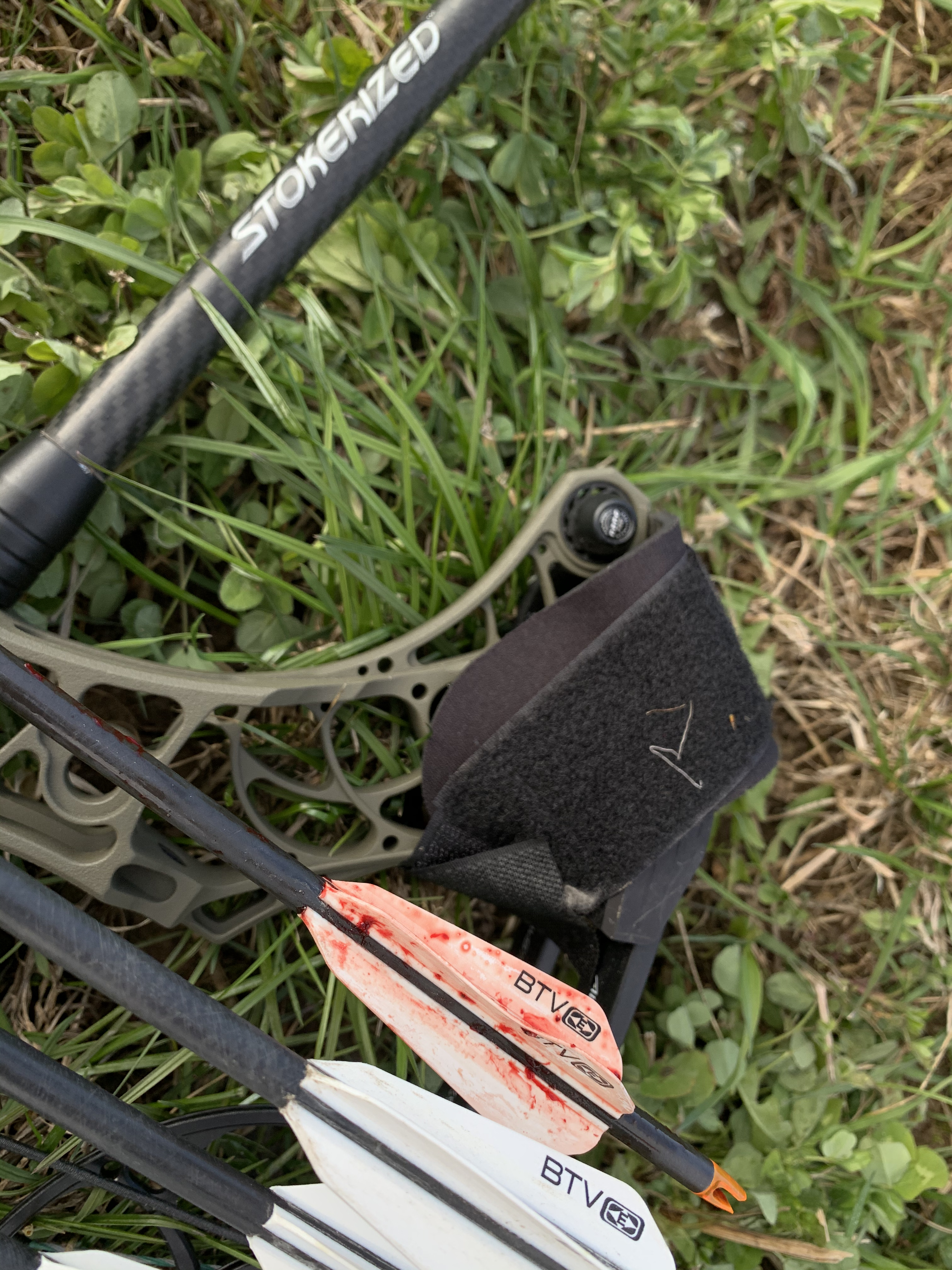 Hopefully the following tips will help you orchestrate your own up-close-and-personal archery encounter.

A shotgun can be deadly through thick brush if you can somewhat see the bird’s head. With a bow, you need a wide-open shot at the body. So, I prefer to hunt fields, and I only hunt fields I know birds are using based on my scouting. With toms roosted nearby, I’ll usually set up a blind the morning of my hunt somewhere in the middle of the field, usually on a high point with excellent visibility. I set my decoys at 10 yards or less — I like slam-dunk shots.

When setting up a blind, always face it west, north or south for morning hunts. On afternoon hunts, face it east, north or south. This keeps the sun from shining into your blind and exposing you. 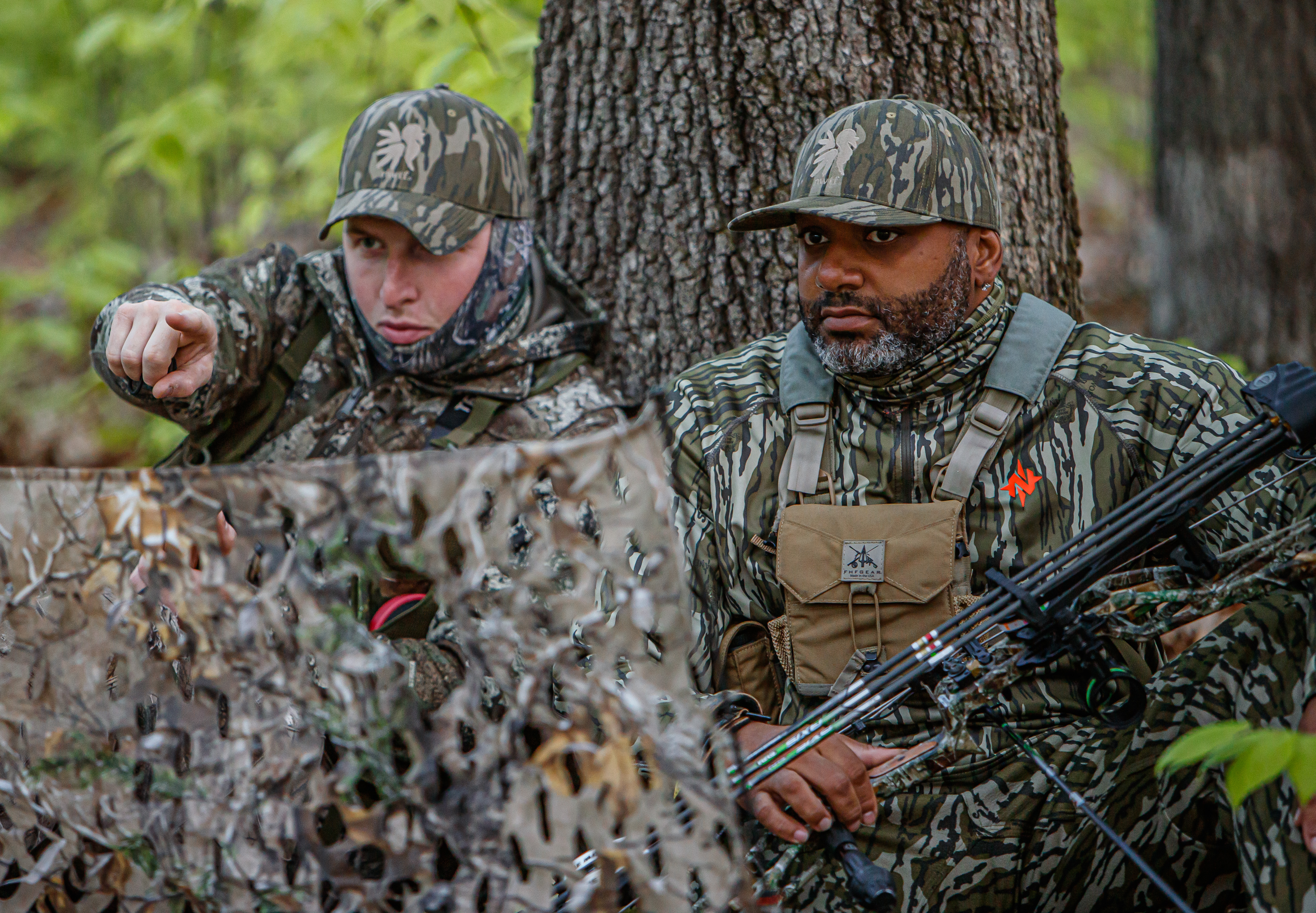 When hunting without a blind, head-to-toe camo is standard. I usually try to get within 100 yards of the roost. I set my decoys 10 yards from the field edge, then sit about 3-5 yards inside the tree line against a tree or other cover that effectively disrupts my human outline. While I rely on my jake decoy to distract an approaching tom, I also try to set up so the tom will walk behind a tree or two, allowing me to draw back undetected.

When hunting in the timber, remember that you need a totally clear shot to avoid deflections. Most birds I bow-kill in the woods are on logging roads. Small forest openings also make good setups. In the timber, there are usually more places to hide, which helps when running and gunning where making a fast setup is the key.

Equipment for the Job

With decoys, you get what you pay for. I used cheap ones my first several years, and although I bow-killed a few toms, I usually struggled to get them close. That changed when I bought Dave Smith decoys.

Anyone I’ve suggested them to hasn’t regretted spending the money after seeing how well toms respond to them.

If you’re new to bowhunting turkeys, a blind will hide the necessary movement of drawing your bow. I often use Primos’ SurroundView. Whatever you buy, make sure it deploys quietly and has a silent window system.

For bow gear, use your deer setup. The only change I might suggest is if you’re shooting a fixed-blade head, consider a large mechanical broadhead, if your setup is powerful enough (see sidebar).

With a stout bow-and-arrow setup, wild turkeys can be shot from any angle. But, a bowhunter must use great discretion with shot placement relative to angle. Birds are almost always moving, and it’s easy to mistake the angle and make a marginal or superficial hit.

With weaker bow setups, say, 45 pounds and under, select shot angles carefully. Avoid direct bone hits. One I’ve seen work well with beginners shooting minimal weight is right at the base of the neck on a head-on strutter. The waddles make a great target, and as long as you hit a baseball-sized circle between the beard base and the waddles, it’s a dead bird.

A broadside bird is best arrowed slightly behind the wing joint and just beneath the spine. The lungs are tucked underneath the spine, and if you go an inch or two lower, you’ll take out all the of vitals. Don’t hit too low and/or forward, though, or your Thanksgiving dinner might become fast food. There’s a lot of body mass beneath and in front of the vitals, making the gobbler appear de-ceivingly huge. That area is mostly breast meat, and a hit there will require a follow-up shot, if you’re lucky enough to get one. Divide the bird into thirds from top to bottom, then aim for the top third.

Another great shot angle is when a tom in the upright position (not strutting) faces directly away. Aim dead center on its back, both up and down and right to left. For a strutting bird facing dead away, aim right at the base of his fan where all of the quills meet.

These tips don’t guarantee success, but over 20 years, they’ve helped me put away dozens of gob-blers with my bow. Try them and see if they do the same for you! 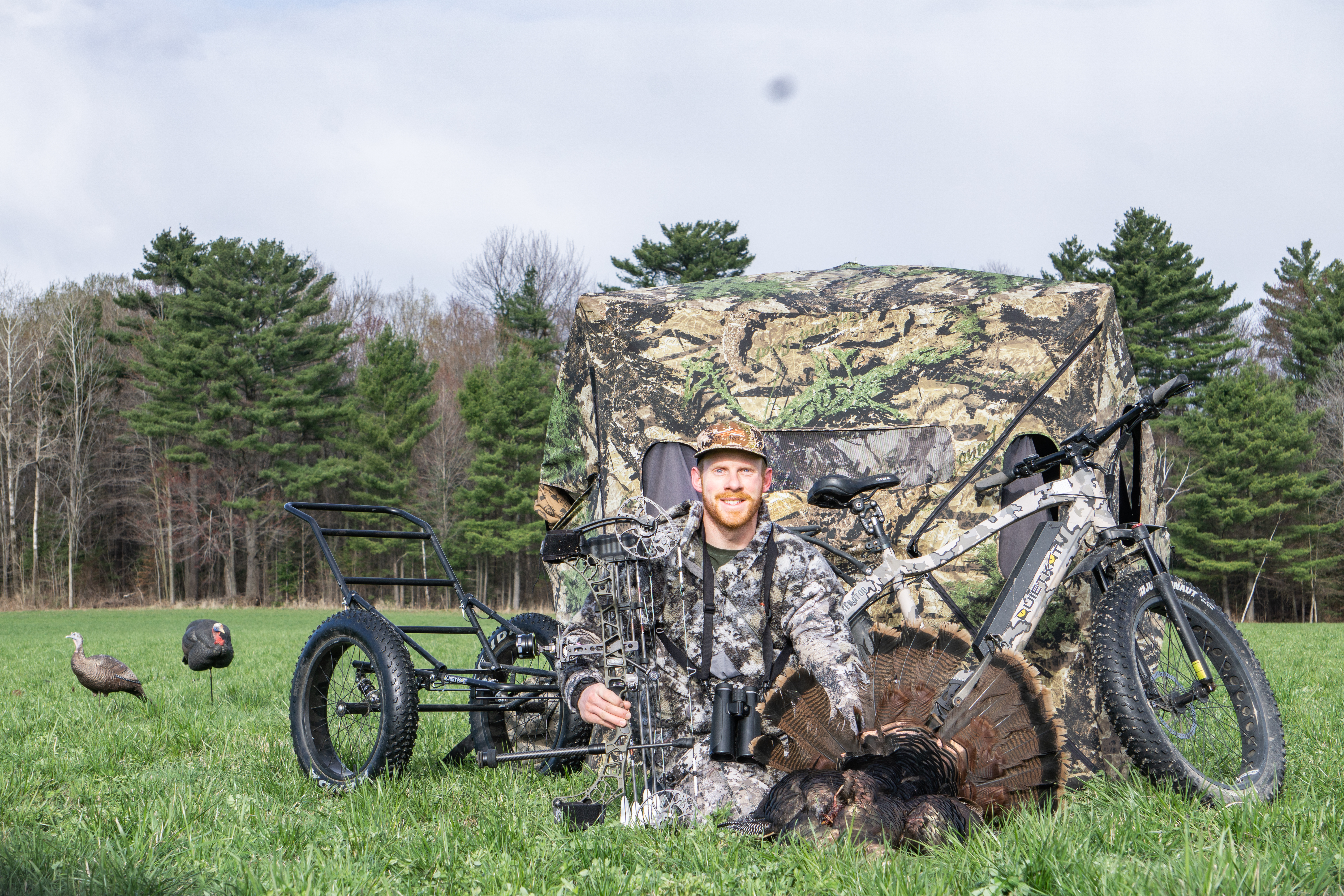 (This tom was roosted in the tall evergreens in the backdrop. The author knew that toms were roosting there, and he placed his blind in the wide open 200 yards from the roost with decoys 8 yards away. The hunt lasted less than an hour.)

From 20 years of experience, I’ve used many different mechanical broadheads. I’ve never lost a bird as a result of the broadhead. Contrarily, the results have astounded me.

First, they typically have larger cutting diameters. This essentially enlarges the kill zone if you miss your mark slightly. Second, the energy that transfers from the arrow to the bird upon impact creates a deadly blow.

If you’re shooting a light setup or mentoring someone who is, I suggest a shaving- sharp fixed-blade, but don’t go smaller than 1 inch on cutting diameter. Shot placement is always the key to killing a tom quickly, but with a small fixed-blade broadhead that doesn’t hemorrhage like a me-chanical, you have no room for error.