Kickin’ and Grinnin’ on the Hunt

Hunting is a sport that welcomes all types of people. You never know who you might run across.

This past spring in Oklahoma, I was fortunate to share turkey camp with Brad Davis, the recently retired Major League Soccer star of the Houston Dynamo. Davis is a six-time All-Star, two-time MLS champion and 2011 runner-up for league MVP. He also has made 17 appearances for the US in international play and currently sits at third for the most assists all-time in MLS. 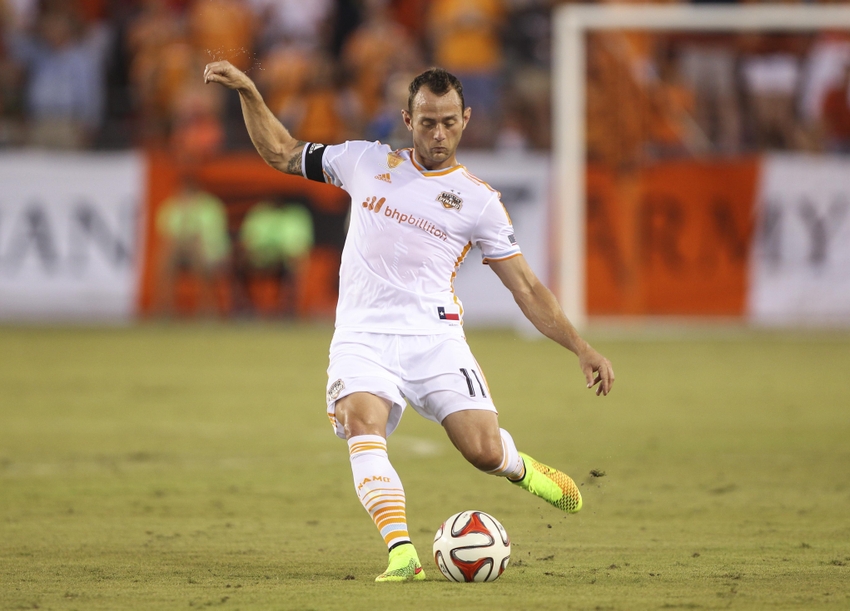 We doubled up on a couple of 2-year-old toms in the Sooner State and got a chance to talk about his love of soccer and hunting.

NWTF: Which came first in your life, the introduction to soccer or outdoor sports like hunting and fishing?
BD: They were both introduced at the same time and are one in the same. My grandparents had a farm that I have gone to since the day I was born. I was around hunting and fishing all the time and used to spend my summers up at the farm enjoying the outdoors and “helping” my grandparents with whatever they needed. Soccer was something I was doing whenever I wasn’t at the farm hunting or fishing and vice/versa. I have seen pictures of me holding onto my parents couch before I could even walk kicking a soccer ball with my dad.

NWTF: When did you first hunt turkey? Tell us about that hunt.
BD: My first turkey hunt was with my dad when I was about 9 or 10 years old. We had about 45 acres about 1½ hours from where we lived. We didn’t have anything to sleep in on the property, so I remember that we slept in our car the night before turkey season opened. I was so excited that I didn’t sleep at all. I don’t know why but I’ve always loved the anticipation of getting up early in the morning to go hunting. Anyways, we get up in the morning and have to cross over this big creek, and the only way to get across it was by walking across a big blown down tree. So as a kid, this was already an awesome adventure. The sun was coming up, and my dad hit his box call lightly and, sure enough, a gobbler responded not too far away. We took off to get set up, and all of a sudden, I remember the woods coming to life. There were turkeys gobbling all over the place. Honestly, I got spoiled on my first hunt and it hooked me for life. My dad only had to make a few more calls before the turkey showed itself and he was able to take it.

NWTF: What is one of your more memorable hunts [from your youth]?
BD: One of my most memorable hunts is when I actually went out on my first solo whitetail hunt. Everyone has been there at some point and the excitement and nervousness was off the charts. The routine of waking up before sunrise getting breakfast and getting your gear together with the nervous anticipation of going out to harvest an animal is something that I absolutely loved when I was a kid and still do to this day. So I head out to the pitch black woods in search of my stand and, well, let’s just say it took me a little longer to find it as walking through the woods your first time in the dark is an experience in and of itself. I got to my stand and it was a perfect fall morning. Cool and crisp with a light breeze. After sitting there for an hour or so and seeing a few deer in the distance, I decided to reach into my pack — which was filled with every type of grunt call, doe bleat, snort wheeze, rattle bag, sound maker you could imagine because they work for the pros on TV right!? — and pulled out my rattling bag. I went through a rattle sequence and much to my surprise a big old buck comes charging through the woods and stops in the wide open at 20 yards. I was able to get drawn and, needless to say, I had a bit of buck fever, and my sight was floating all over God’s creation, and I couldn’t get it settled in. Finally, I got it to where I felt comfortable and let the shot go. Unfortunately, I shot just high and missed. I was crushed. Looking back, it was the beginning of an addiction that I still have to this day, and I look forward to heading out into the woods every chance I get.

NWTF: Which turkeys for your Grand Slam have you checked off your list?
BD: Eastern and Rio. I hope to go after a Merriam’s next year.

NWTF: You can only carry one: pot, box or diaphragm call. Which one it is?
BD: Diaphragm for sure. I just think when you get those right they sound the most realistic. Also, having to fight the amazing site of a turkey, it is the call that requires the least movement.

NWTF: What is your current turkey shotgun setup (gun, optics, choke, ammo)?
BD: I have a Remington 870 SPS Super Mag dipped in Mossy Oak Obsession camo. It is topped with a TruGlo 30mm scope and has a Turkey/Predator Rem Choke.

NWTF: Though you are recently retired, you began your professional career in 2002. How did you balance your love of the outdoors and the travel schedule of a professional athlete?
BD: Unfortunately, once I started playing professional soccer I had to take a break from turkey hunting and really only ever got to deer hunt. Our schedule went from the end of January into November; however, even if it wasn’t hunting season I would try and take every free minute I had to head back to my farm and just relax. The outdoors has always been my stress reliever and always will be.

NWTF: Which man cave would be bigger, one to house your soccer trophy/accolades or one for your photos, mounts, etc. of hunting adventures?
BD: That is a tough question, but I would have to say at this point it would be my soccer accolades; however, now that I’m retired from soccer, I plan on changing that here in the near future!

NWTF: You are a father of three. Have you introduced your kids to the outdoors already, and how do you see hunting and fishing playing into their lives?
BD: Absolutely. My oldest son is 7, and we went on our first deer hunt together last year and harvested a doe.  A few things that hunting can teach people is to be thankful for what you have and how to live off the land. I took my son through the whole process of field dressing and processing the meat and told him that deer is what was going to feed us throughout this year. Even to this day, if we make something out of venison I tell him it is the deer we harvested together, and it gives him a sense of accomplishment that he helped to feed the family. We went on our first turkey hunt together this year. We didn’t end up getting a turkey, but the time together created memories that we will never forget. Also, turkey hunting definitely assured me a hunting buddy for life! When he heard the Eastern gobblers hammering for the first time he was hooked! I hope to continue the tradition with my younger two as they get older.

NWTF: What are some lessons learned in the outdoors that helped you with soccer, and vice-versa?
BD: Patience, determination and strategy for sure. Soccer and hunting both have ebbs and flows, and it’s just about staying the course, getting to work and grinding out results while staying one step ahead of your opponent.

Davis is CEO and co-founder of Banded Brigade Outdoors www.bandedbrigadeoutdoors.org and is a member of Mossy Oak's national pro staff.