We all are turkey addicts, and we are perfectly comfortable with it. Once season arrives, we know we will be hunting; the only question remaining for some, including me, is what will be the method of take.

My weapon of choice this year is my bow, as an obsession with archery has me yearning to arrow a boss gobbler. And, just as gun hunters choose the loads they prefer, I was in search of broadheads that suited me best.

While there are a variety of broadheads out there designed for turkeys, I opted to just test a handful of different heads meant more for body shots.

Broadheads were tested for sharpness out of the package, accuracy against field points and penetration. And, to simulate approximate impact damage on turkeys, broadheads were shot through whole raw chickens. (Chickens were not wasted as they were later used to make delicious buffalo chicken dip.)

All tests were run using Gold Tip arrows out of a 2016 Bowtech Boss with a Ripcord Code-Red rest and Trophy Ridge sight. Field points were paper tuned January 2017.

Here are the results:

Type: Hybrid
Cutting Surfaces: 1-inch fixed blades, 1¼-inch expansion blades
Sharpness out of the package: Fixed blade cut paper cleanly
Observations at 20 yards: Hit about 3 inches off of field point; light noise in flight; would require broadhead tuning to correct flight.
Penetration on Rinehart Block: Second least penetration only to the Muzzy at 4 7/16”.
Damage: Hit high on the bird due to flight issues, but still cut breastplate; makes a unique wound channel due to mechanical blades set at a 45-degree angle from the fixed blade.
Durability: Held up fine shooting through the chicken. But, probably not meant to shoot repeatedly into a block target as expansion blade screws ripped out of the ferule.

Type: Fixed
Cutting Surfaces: 1 13/16-inch
Sharpness out of the package: Leading edge was sharp but tough to test on paper because of the design; bleeder blades were razor sharp.
Observations at 20 yards: Noticeable hiss in flight, and just like the other Dirt Nap broadhead, it hit 3½ inches off of field point; would require broadhead tuning.
Penetration on Rinehart Block: Surprised that it finished middle of the pack in penetration at 4 ¾” despite the design.
Damage: Took three shots to get it to hit the chicken because of flight issues, but once it did, it ripped a pretty sizeable hole, nearly slicing the backbone if half.
Durability: Blades still just as sharp as they were out of the package even after shooting through the raw chicken.

Type: Expandable
Cutting Surfaces: 1 7/16-inch or 1 1/8-inch cutting diameter
Sharpness out of the package: Quite sharp out of the package, cut paper and was able to easily shave hair off my arm with it.
Observations at 20 yards: No issues with accuracy against a field point and relatively quiet in flight.
Penetration on Rinehart Block: Second only to the Rage in penetration at 5 ¾”.
Damage: Cleanly cut the leg bone on the chicken and cut a nice channel through the bird. (Shooting through the chicken was the first time it was clear the blades opened. Did not see wide cuts in the block target.)
Durability: Blade remained sharp. The ferule needed to have the blade channels cleaned for blades to lay flat, but that was all.

Type: Hybrid
Cutting Surfaces: 1-inch fixed blades, 1 5/8-inch expansion blades
Sharpness out of the package: No issues with sharpness out of the package. Coworker helping with the review sliced his finger on one of the expandable blades.
Observations at 20 yards: Field point hit so close to the broadhead that it broke part of the blade.
Penetration on Rinehart Block: At only 4 3/8”, this was the least penetration of all broadheads; was surprised by this, but not an entirely bad thing for turkey.
Damage: Appeared to open all the way, but did not completely slice the backbone.
Durability: Expandable blades bent easily pulling them from the block target, though they were probably not meant for target shooting.

Type: Expandable
Cutting Surfaces: ¾-inch leading edge, 2 1/8-inch expansion blades
Sharpness out of the package: Expandable blades were able to shave hair, but, same as the Shred Head, it was tough to test leading edge due to the design.
Observations at 20 yards: Quite loud in flight, but was dead on with field point.
Penetration on Rinehart Block: Buried 6” in the target, the deepest of all broadheads. This was a surprising finding due to the hooked nature of the leading edge blade.
Damage: As expected, the Rage left a gaping hole in the chicken. The broadhead cut wing bones on both sides, and since I had forgotten to remove the giblets from this chicken, it sliced through that as well. The inside of the bird was littered with pieces of the plastic shock collar.
Durability: No damage from field testing.

Shrapnel – EX (not yet in production)

Type: Expandable
Cutting Surfaces: 1½-inch (1 5/8-inch max)
Sharpness out of the package: Clean cut of paper
Observations at 20 yards: Despite the different design, it flew well matching less than an inch from the fieldpoint; quiet flight.
Penetration on Rinehart Block: Middle of the pack penetration at 5 ¼”.
Damage: Only broadhead to cleanly cut through the spine of the chicken.
Durability: Not exactly sure how the tension screw works on the broadhead, but the more I shot it, the more loose the blades became. Putting the screw deeper in the ferule made the blades looser and unscrewing it made the blades tighter. Blades were unscathed after cutting through the chicken.

Wasp – Jak-Hammer (Not included in the video)

Type: Expandable
Cutting Surfaces: 1 ¾” cut diameter
Sharpness out of the package: Cut paper with no issue.
Observations at 20 yards: I followed recommendations on the package to wrap the blades in dental floss for target shooting and achieved great results in accuracy. The Jak-Hammer and field point hit within an inch of each other. However, I did notice a bit of noise, most likely from the added wrapping.
Penetration on Rinehart Block: Though shot outside of testing from the other six, this broadhead penetrated nearly 5 ¾” into the block. This would put it nearly equal with the Innerloc.
Damage: The entry wound appeared smaller than advertised, but still it left a decent hole. It also cleanly cut through a wing.
Durability: Cutting through chicken did not phase the Jak-Hammer.

Wac'Em – 3-blade Expandable (Not included in the video) 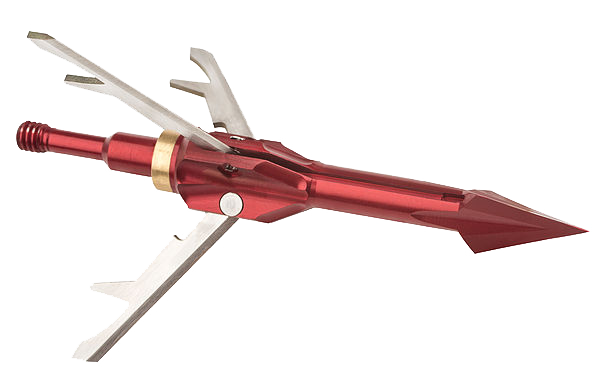 Type: Expandable
Cutting Surfaces: 2" cut diameter
Sharpness out of the package: The aluminum ferule was not as sharp as I would have liked, but the expandable blades were razor sharp, easily cutting paper and shaving hair off my arm.
Observations at 20 yards: The broadhead flew similar to other expandables, landing less than an inch form my field point.
Penetration on Rinehart Block: Also shot outside the testing of the first six, this broadhead penetrated nearly 5 1/2” into the black, just 1/2" short of the Rage.
Damage: The Wac'Em did some serious damage, cutting through the breastplate and the thigh bone.
Durability: One of the blades did get slightly bent after cutting through chicken bones, but the cutting edges remained sharp.