While some turkey hunters prefer to hit the field each spring toting a scattergun, there are hunters like me who enjoy taking a spring gobbler with archery equipment. Just as shotshells have evolved year after year, so too have broadheads. A new batch of broadheads featuring updated blade configurations, mechanics and designs can only mean one thing … it is broadhead testing time.

This year’s tests featured eight broadheads run through a series of tests and observations to help you decide which would work best for your spring pursuit. As always, we try to give the most information possible, so here is the 2019 setup for our test:
• Bow – 2018 Bowtech Realm set at 70 pounds, 30-inch draw
• Arrows – Bloodsport Prosecutors
• Sight – Apex Covert 4-pin Dovetail
• Stabilizer – Bee Stinger Microhex
• Release – Scott Mongoose
• Rest – HHA Virtus

Also, I shot raw chickens with each broadhead, noting the damage incurred. All heads were shot at a Rinehart RhinoBlock target. It is worth mentioning for penetration tests, the block target is not new. So, results may vary. 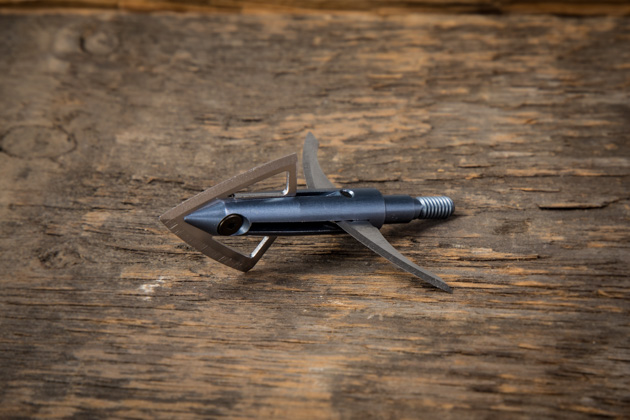 Blood Sport – Grave Digger (100 grain)
Type: Hybrid 4-blade, fixed blade and front-deploying mechanical blades
Cutting Surfaces: Total cut diameter of 2¾ inches; 1-inch cutting surface from fixed blade and another 1¾ inches from the mechanical blades
Sharpness out of the package: No issues with sharpness.
Observations at 20 yards: After shooting this head a bit during deer season (even taking two deer with it), I knew it flew pretty well. In our tests, it hit just a bit left of center, still inside the 2½-inch bullseye.
Penetration on Rinehart Block: 10 1/8 inches, finishing
Damage: The mechanical blades opened flawlessly, cutting the wing and leaving a clean cut all the way through both chicken breasts.
Durability: The mechanical blades on the broadhead saw little damage, though one broadheads retention system became loose after opening the blades manually. Luckily, I had extras. The broadhead fired at the chicken did not have any issues and still appeared sharp. However, the ferule had indentations where the mechanical blades had made impact on deployment. Still, the blades on this one folded back in to place, but they seem a bit looser than before shooting. 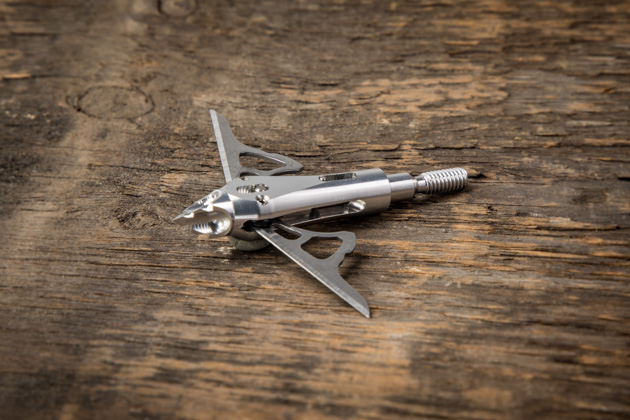 RAMCAT – Cage Ripper (100 grain)
Type: Two-blade mechanical, piston-driven deployment of mechanical blades
Cutting Surfaces: 2 inch
Sharpness out of the package: Not sharp enough to shave hair but cuts paper cleanly. The tip of the broadhead cleanly punctures paper, but it is more of a chisel-style tip.
Observations at 20 yards: The head was fairly quiet but will require minor tuning as it hit about 1 ½ inches high and right of center. Note to self … don’t shoot this head at high density foam, as the blades don’t allow for easy pulling from the target. I instead pushed the head through, unscrewed it and pulled it back out.
Penetration on Rinehart Block: 10 3/8 inches
Damage: The broadhead’s chicken target was still somewhat frozen on the inside, causing the entire chicken to fall off the box. When checking the wound, the broadhead still went all the way through, leaving a clean cut. Pretty impressive, and I have no worries about it hitting bone.
Durability: It took just a slight bit of cleaning to the spring-loaded piston system to put the blades back in position, but the blades showed no damage despite hammering the still frozen chicken. Should be no issue shooting this head through gobblers. 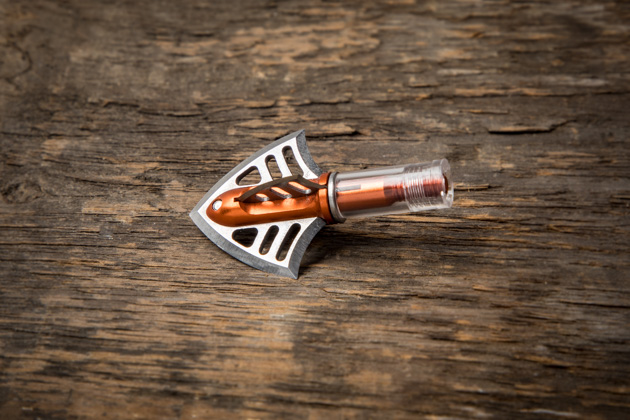 Rocky Mountain Broadheads – First Cut X (100 grain)
Type: Four-blade fixed
Cutting Surfaces:  1 7/8-inch combined cut diameter
Sharpness out of the package: Not as sharp as some of the other heads, but still has an edge. Simply because of the design, it tears the paper while creating a plus-sign entry hole. This is probably designed to withstand the higher speed impacts from being shot out of a crossbow.
Observations at 20 yards: Head hit about 1¼ inches high above dead center.
Penetration on Rinehart Block: 10 7/8 inches
Damage: Left a typical plus-size entry and exit, as expected. Because the head hit just a bit back, it didn’t make contact with any bone, so nothing to report on overall damage to the roaster chicken.
Durability: Not a single complaint on this head. The blade edges appear good as new. 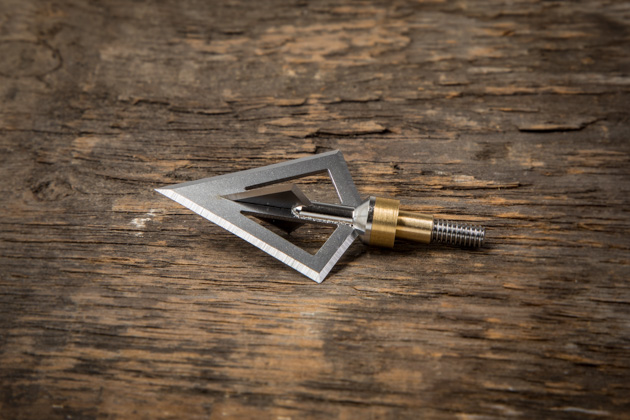 Dead Ringer – PSD (Pump Station Disconnect) (100 or 125 grain)
Type: Two-blade fixed with additional bleeder blades; removable brass collar allows user to go with 100- or 125-grain configuration
Cutting Surfaces: 1 1/8-inch combined cut diameter
Sharpness out of the package: Just like the other Dead Ringer head, this was sharp enough to shave hair on my arm.
Observations at 20 yards: This broadhead hit dead center and was silent in flight.
Penetration on Rinehart Block: 12¾ inches
Damage: Entry and exit wounds were similar in size, but both had clean cut lines to them. It was easy to see the main blades and the bleeder blades in the chicken, as the bird was still somewhat frozen.
Durability: A little cleaning and it was as if I never shot this broadhead. 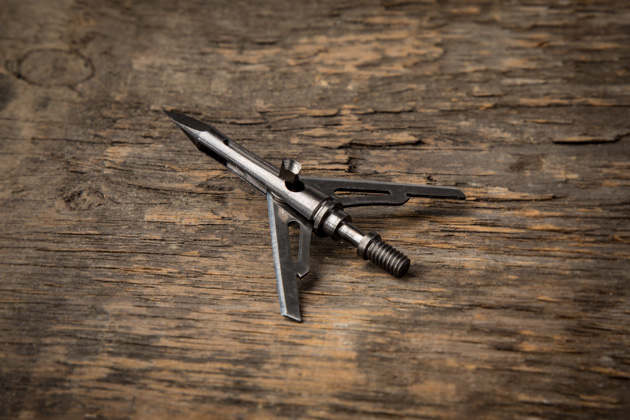 Dead Ringer – The Hatchet (100 grain)
Type: Two-blade mechanical with additional bleeder blades that help with rear deploying mechanicals, uses shock collar to hold blades in place
Cutting Surfaces:  2-inch cut diameter
Sharpness out of the package: These blades are razor sharp. They sliced through paper, and the blades shaved hair off my arm. The tip of the ferule also is sharp.
Observations at 20 yards: Probably the most silent of all of the heads we shot; the Hatchet hit just an inch or so above center.
Penetration on Rinehart Block: 13 inches
Damage: The chicken was still a bit frozen, but the Hatchet blades deployed properly and left a nice 2-inch cut all the way through.
Durability: Blades took some damage, but the ferule is intact. Haven’t researched the availability of the replacement blades, but they are easy to swap out needing no allen wrenches for the swap. Simply, put the blade in a forward facing direction and the bleeder blade is easily removed. 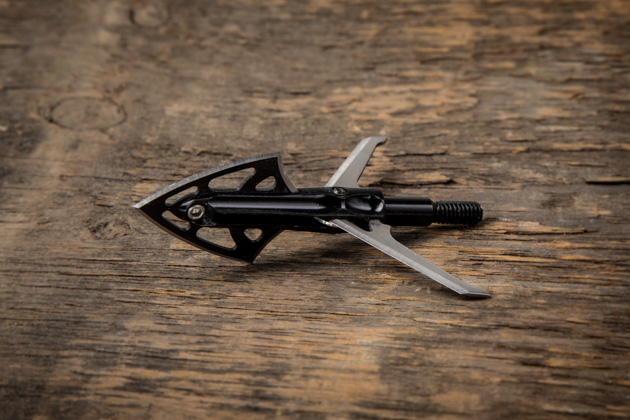 Rocky Mountain Broadheads – Switchblade (100 grain)
Type: Four-blade hybrid; two mechanical and two fixed blades
Cutting Surfaces: 1 7/8-inch combined cut diameter
Sharpness out of the package: No complaints, the blades cleanly cut paper.
Observations at 20 yards: The switchblade design is comparable to the Rage four-blade, both being Feradyne heads. This one is a front-deploying head, and due to a smaller head diameter when taking into account the size of the blades, it seemed to fly better and hit the target’s center.
Penetration on Rinehart Block: 10 inches
Damage: This head made the most impressive cut on the chicken, leaving a massive cut throughout. It also cut bone on entry and exit, clipping wings, and the backbone also took a good cut.
Durability: Because of the massive hole left in the chicken and the bone it sliced through, I was expecting damaged blades. There was no sign of damage, and it was good for hunting after a quick cleaning. Not so much broadhead durability, but the rubber o-ring used to secure blades in place was still in one piece, just now positioned half way down the arrow shaft. 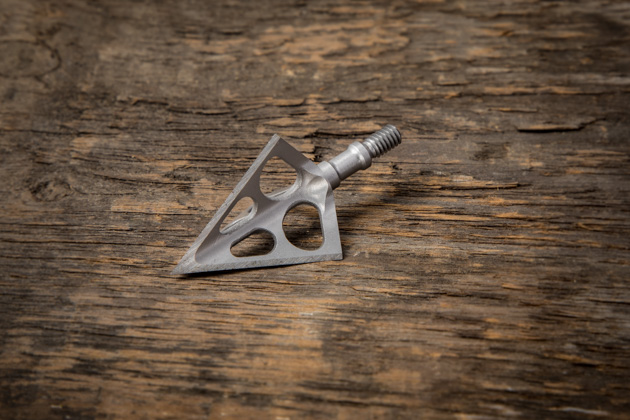 Muzzy – One (100 grain)
Type: Three-blade fixed, single-piece design
Cutting Surfaces: 1 1/8-inch cut diameter
Sharpness out of the package: Broadhead had great edges on the blades. I nicked my finger just trying to pop one loose. Easily pushed through paper leaving a perfect three-point star.
Observations at 20 yards: Hit just a bit right of center, but still inside the 2½-inch circle
Penetration on Rinehart Block: 11¼ inches
Damage: The head left a typical triangle wound and a nice opening on the entry side. It also left a deep cut in the thighbone.
Durability: Head was clean aside from a couple minor nicks in the blades. The design is such that a quick hit on a sharpening stone and it’ll be good for the field. 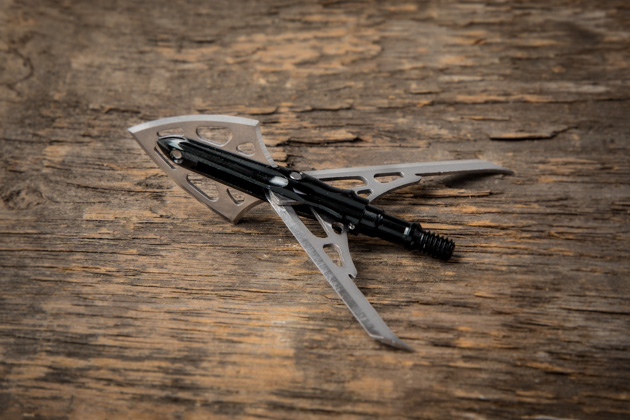 Rage – X-treme 4 Blade (100 grain)
Type: Four-blade hybrid; two fixed and two mechanical blades held in place by shock collars. Red shock collars are for crossbow use and black collars for upright bow use.
Cutting Surfaces: 2.3-inch or more cutting diameter
Sharpness out of the package: Mechanical blades seemed sharper than fixed blades, but both cleanly cut paper.
Observations at 20 yards: Surprised me a bit, but this head hit about a 1¼ inch high and left. The impact on the target was easily visible in the massive 2-inch plus lines. Might require just a bit of tuning due to flight.
Penetration on Rinehart Block: 9¾ inches
Damage: Same as other Rage products, this broadhead left a massive hole and cut part of the leg and thighbones on the exit. The plastic shock collar will need replacing.
Durability: As expected, the shock collar was gone, but the massive cutting edges looked clean of dings and dents. Still, the ferule need to be cleaned for the blades to again seat properly.

While all the broadheads in our 2019 test are more than capable of helping to bag a spring gobbler, I plan on toting the Rocky Mountain Switchblades and the Dead Ringer Hatchets for my 2019 archery turkey hunts. For body shots on turkeys, I am a big fan of wide cutting heads, something both of these mechanical blades offer. And, with just a bit of tuning, both blades fly incredibly well.