Thinking back on several decades of turkey hunting, I remember several times when a hunt succeeded because two of us ganged up on a tom. Usually, it was a bird that talked a good game but would not come past the point of no return, albeit acknowledging every bogus hen sound we made.

Here’s an example from a few years ago in California’s Mendocino County. I was hunting a small piece of private property with my buddy Tom Stone and we were set up about 200 yards from several turkeys roosted in tall ponderosa pine trees. As the dark of night slowly slipped away, at least four toms announced their positions with a flurry of gobbles. When we knew the turkeys were on the ground, we let loose with hen yelps — Tom with a box call and me with a diaphragm. Their eager response told us the gang was coming our way. “Hey,” I thought, “we might score a double.”

To come into sight, the birds would have to leave the two-track road they were on and come uphill a short distance. Instead, they hung up in an opening along the road and tormented us with their gobbles. When nothing we did for the next 15 minutes prompted them to move even a little, I got cute and made a move of my own. 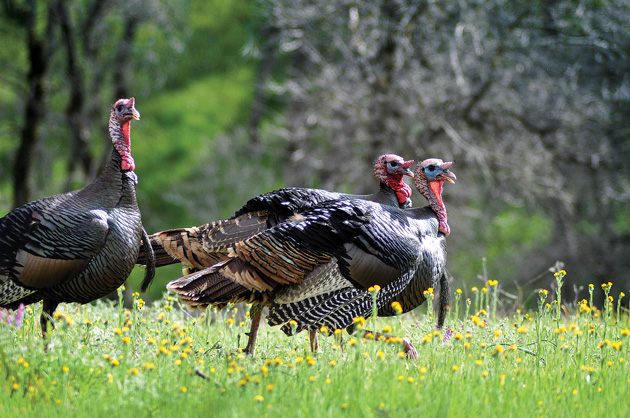 “Tom,” I said, “you stay put and be quiet. I’m going to back off and call as I go. Maybe that will bring them to you.”

Being careful not to be seen, I backed away a few feet at a time, calling sporadically like a comely hen slowly walking away. My soft yelps were just loud enough for the gobblers to hear, and evidently, they couldn’t stand the thought of being left behind. I’d gone maybe 50 yards when Tom’s 12-gauge spoke, and one of the longbeards stayed behind when the others fled.

On a hunt in Missouri four years ago, Zink Calls’ Matt Morrett gave up the chance to film a kill for “Avian X TV” so I could score on a big Eastern tom. It was an overcast morning, and willing turkeys were few and far between. We muffed one opportunity at daybreak and because our time was short, we had to make the most of another one if it arose. Morrett, who has a lot of irons in the fire in spring, was due to leave for a hunt in another state that afternoon.

When we heard another gobbler sound off in a basin below us, Morrett told me to drop a few yards down the hill and set up in the woods. He would move back up the hill a short distance and call from there.

“If that gobbler shows up in range, Higley, don’t worry about the camera,” Matt said. “Just shoot him.”

The tom, taking his sweet time, came up the hill slowly. His occasional gobbles in response to Morrett’s calling let me follow his progress. And when I finally saw his colorful periscope-like head rise above a fold of land within range, I did not hesitate to let the 12-gauge Browning Maxus do its job. Weighing nearly 26 pounds, it was one of the biggest longbeards I’ve taken.

Like any tactic used in turkey hunting, the buddy system doesn’t always work. However, it pays off often enough to make it viable in circumstances such as those described.