Taking a turkey with a .410 has become all the rage over the past couple seasons, and it started when manufactured loads began hitting the market two seasons ago. Now off-the-shelf firearms are starting to catch up, as many of the manufacturers are launching new models catering specifically to this audience eaten up with the .410 bug. But, as with any turkey gun, patterns can be taken to the next level with a little range time and aftermarket enhancements such as choke tubes.

The folks over at Carlson’s Choke Tubes were kind enough to send us one of its new TSS Turkey Choke Tubes for our Stevens Model 301 Turkey, which already comes equipped with an extra-full choke and is optimized for shooting Federal TSS.

So I decided to hit the range to see how the Carlson’s choke stacked up against the one that came stock in our single-shot .410. It is worth noting the gun comes with a rail for mounting optics, but I shot the gun on a sled with just the bead sight for this test.

Now, anyone running TSS knows it isn’t cheap, so just to get a feel for the chokes, we began running Winchester Super-X, 2½ -inch, No. 6 shot. I opened up a couple shells and counted an average of 110 pellets just to help provide some sort of baseline for our hit percentage.

I first fired a dozen rounds or so through the Stevens just to get a good feel for my point of aim. Once I felt comfortable with where I was holding the bead sight, I started running the test.

Here were the results shooting at 20 yards.

The results were actually surprising. While the Carlson’s tube provided more center ring pellets, the overall hit percentage was lower than that of the stock extra-full choke. Remove the bottom 10-inch pellet count target for each series, and the stock choke performed better across all categories.

Switching over to Federal TSS 3-inch loads (13/16-ounce, No. 9s) shot at a distance of 20 yards provided the following data. (For hit percentage, I used Federal’s spec sheet stating the .410 rounds have an average count of 294 pellets.)

Despite the Stevens choke posting the highest 3-inch ring count, the Carlson’s choke was more consistent during the three-shot test. I did notice the TSS shot lower than the Winchester, so I made some adjustments. Still, dropping out the bottom targets for each, the Carlson’s performed better.

The final step in my test was to back things up to 40 yards. This is what I consider the cap on my range, despite knowing that birds have been taken at much farther distances. Here is how things turned out.

I did fire a few Winchesters at the 40-yard targets just to adjust my aiming point in order to get my patterns fairly centered. Again, the results were somewhat surprising, but not in the way I thought they would be. I expected to see the Carlson’s tube outperform the factory tube in all aspects, based on the 20-yard TSS targets, but aside from the final target of the day where the numbers showed a huge increase in count, the two chokes seemed to perform equally. 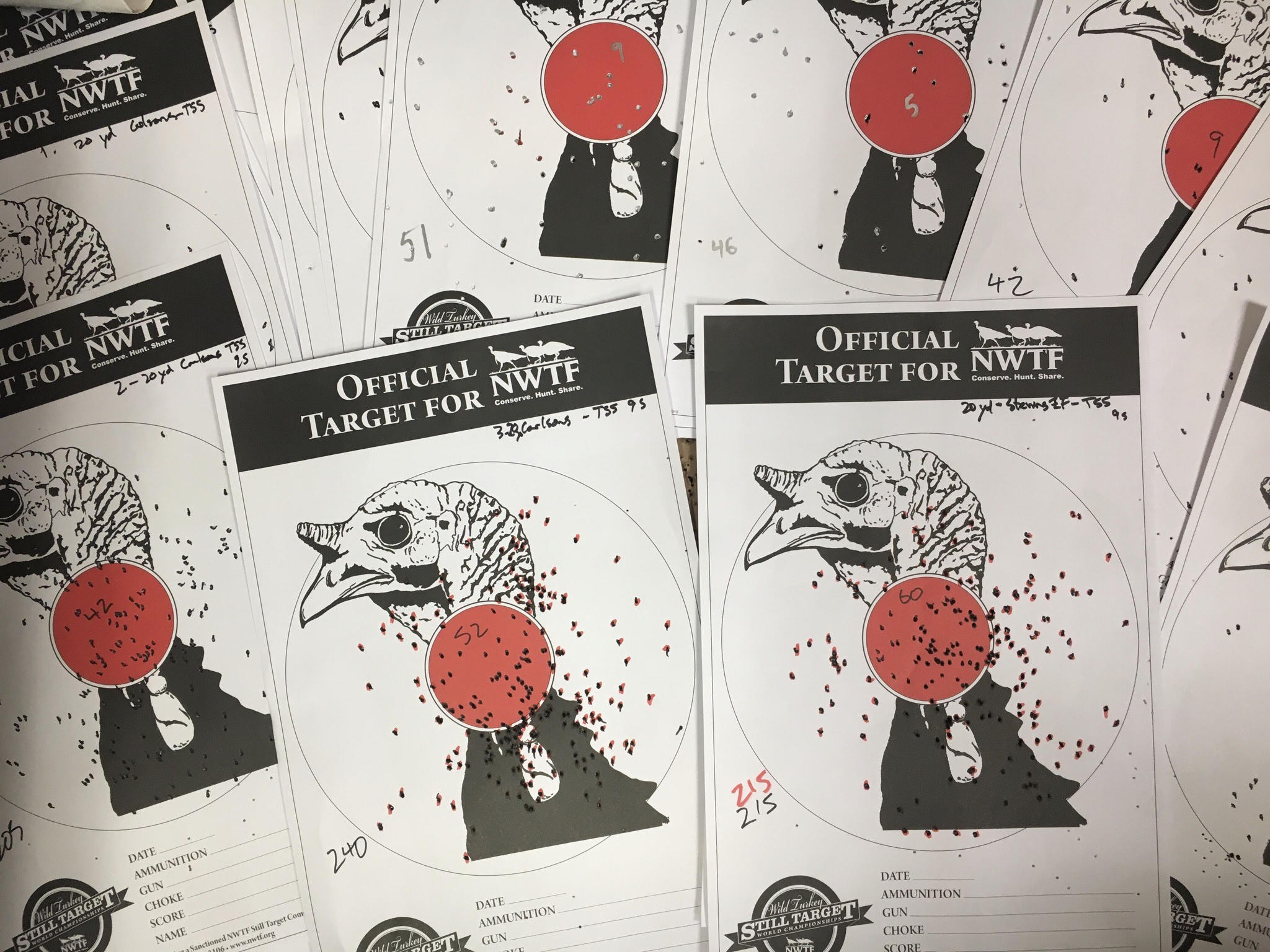 I am not saying this test is the gold standard of .410 choke tube tests, but I feel like the data I collected was pretty solid. Sure, you could slap an optic on this gun for better magnification and probably achieve better patterns out of both tubes. And, maybe the Carlson’s would achieve more consistent numbers similar to the final target of the day. But, I am shooting my .410 with open sights this year in hopes of calling a tom to 25 yards or closer, and both tubes will surely put the smack down on a bird at this distance. But if your gun doesn’t come with a turkey choke or you are going to regularly be pushing that 40-yard mark for shooting a bird, I’d say $49.95 is an easy upgrade to pull the trigger on.