“Which turkey choke will work best in my gun?”

That’s a question I’ve been asked thousands of times over the last 20 years. I have invested countless hours of range time and many dollars in shotguns, barrels, chokes and shells, to be able to answer that question factually.

Times change. Manufacturers come and go. And so do the products they make. I shoot pretty much year-round in both competition and hunting situations and I keep up with new hunting shotguns and shotshells that are offered each year. I have found there is no substitute for range time to learn how particular combinations of guns, shotshells and chokes will actually work.

With the introduction of the Winchester Long Beard XR turkey shells — and their outstanding performance during the NWTF’s Wild Turkey Still Target World Championships — I’ve had an increasing number of inquiries about them and what chokes are recommended for them. To make sure I was responding correctly, I initiated what I call the Turkey Choke Evaluation Project.

It was a major project, and I couldn’t find any other study in which so many different chokes were evaluated with any specific brand or brands of shotshells.

I asked popular commercial manufacturers to submit the chokes they thought would work best with 3-inch WLB shells with 1¾ ounces of No. 6 lead shot. They could choose any thread type: Benelli Crio, Benelli Mobil, Rem-Choke, Invector, Invector Plus or Mossberg 835/935. Then I collected a few others and ended up with 32 choke configurations.

I used the following guns: Benelli Vinci, Benelli SBE, Browning BPS, Mossberg 835, Mossberg 930 and Remington 11-87. Each of them had 28-inch barrels.

I shot on days with similar weather conditions to be as consistent as possible in reporting the results. I watched temperature, humidity and barometric pressure. Each trip to the range was shot at the same time of day.

I attempted to shoot in temperatures more like those in which most hunters might find themselves in the early-spring and late-fall seasons. Temperatures ranged from the low 50s when I began to shoot each day and normally rose to the mid 50s by the time I completed. To be as objective as possible, I alternated the order in which I shot the guns and chokes at each session.

I fired three WLB shells through each choke tube. All shots were taken at 40 yards, since that is the distance that most hunters use to evaluate performance. I threw out both the high and low scores and evaluated the remaining target. Evaluation entailed a total pellet count within a 10-inch circle. Evaluation also included an examination for 2-inch gaps within that circle to determine pattern quality.

Evaluating pattern quality was the main goal of the study. While a lot of emphasis is placed on the number of pellet hits on a target, the true measure of pattern quality is the coverage of the target area and the area immediately surrounding it, sometimes referred to as the halo area. I did not attempt to quantify this halo area but observed that all patterns had sufficient pellet hits outside the 10-inch circle to allow for error on the part of the shooter or for movement on the part of the turkey.

To determine the performance of the shotshell and the choke tube, each shot was taken from a rest at a 36-inch-by-36-inch white paper. The best 10-inch pattern on that paper was selected. The point of aim and point of impact differed with many of the chokes and guns, as is normally the case.

Even though pellet counts varied from choke to choke, the overall quality was excellent with only a few patterns having any real gaps. It was also noted that the internal geometry of the various chokes proved to be more important than the exit diameter, since each designer determines what “internals” work best with his particular choke tube. It was also noted that some barrels, regardless of chokes used, exhibited more consistent patterns. The accompanying chart yields a wealth of information about each choke tube and its performance.

The goal of this study was to provide information for the turkey hunter to use in evaluating what choke might work best in his or her particular shotgun with WLB shotshells under conditions the average turkey hunter might encounter in spring and fall.

I hope you will find the information informative and helpful, but it is always up to each shooter to pattern his or her gun with the choke and shell they intend to use in the field. There is no substitute for range time when it comes to learning exactly how a particular gun will perform. 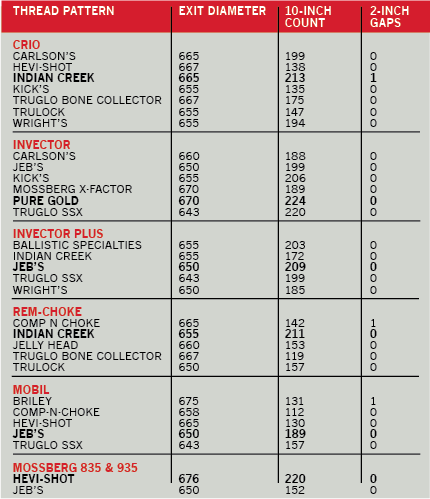