Closing the Season with Mentored Success

What’s a better way to close out the spring turkey season than to fill your turkey tags? While some might say there is no better way, many dedicated conservationists will more than likely tell you putting a new hunter on their first bird is the pinnacle of a successful turkey season. And, after 2020, retaining hunters is more important than ever.

However, the trend of hunter participation prior to the anomaly in 2020 was still on the decline and still comprised, predominately, of white males. And while the dwindling trend can be alarming for conservationists and guardians of America’s hunting heritage, it’s not too late to turn the tide. Many people from different backgrounds, regions and demographics got outdoors to hunt for the first time amid the pandemic, while others did so to harvest their own sustainable and organic food source. (Click here for more about the Locavore Movement). The NWTF, the Council to Advance Hunting and the Shooting Sports, state natural resource agencies and numerous other organizations are working diligently to retain new hunters and recruit those interested in procuring their own food.

Samaria Muhammad’s first-ever turkey hunt, hosted by the NWTF and South Carolina Department of Natural Resources, is a refreshing example of the R3 (Recruitment, Retention and Reactivation) movement at work, welcoming new, food-motivated hunters with open arms. Muhammad’s hunt is also representative of the challenges so many new hunters face when seeking to explore their newfound interest. 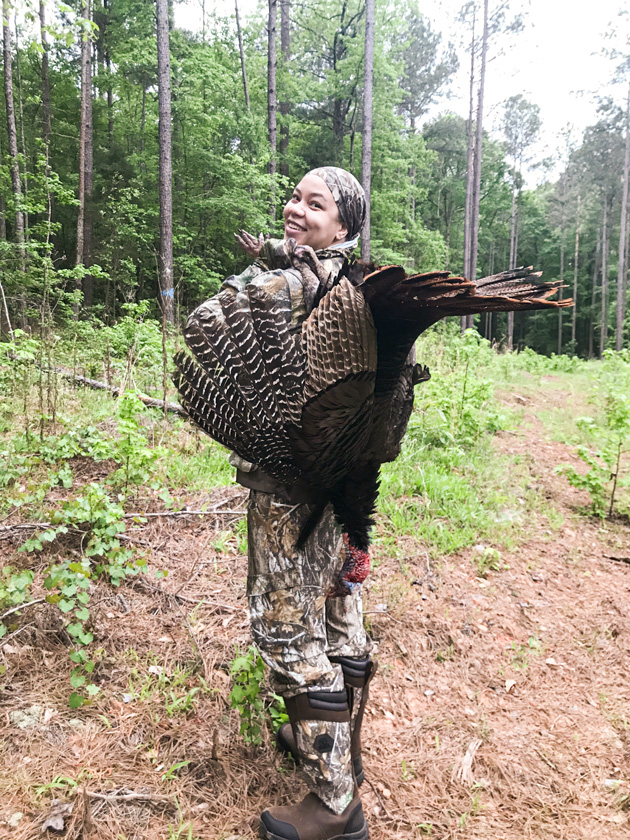 Like many adult onset hunters, Muhammad’s journey to become proficient in the outdoors stems from her desire to produce ethically-sourced, local, organic and sustainable food sources. Healthy food, coupled with often being trapped inside for extended periods pursuing her Ph.D., led Muhammad to an NWTF and SCDNR mentored turkey hunt.

Muhammad needed guidance, something many new hunters seek, and the NWTF-SCDNR hunt provided that.

“I didn’t have a family member or a friend who could take me, but I also didn’t know anything about licensing requirements, where to hunt, how to hunt, what gear I needed or what firearms to use for hunting,” Muhammad said. “After I’d run into a bit of a wall finding a mentor or lessons, I decided to just sign up for a hunter’s education course to get my license.”

At the course, she inquired about more opportunities for new hunters. The hunter education instructor forwarded her information to SCDNR, and within a few weeks, Muhammad received an email about an upcoming turkey hunting clinic and mentored hunt.

She registered for the hunt and overcame what she claimed was her biggest barrier to becoming a successful hunter. Little did she know, she would soon have a picture-perfect turkey hunt, utilizing all the skills she learned with finesse.

“I was with Samaria at the SCDNR class, and you could just tell she was absorbing every drop of information,” said Travis Sumner, NWTF Hunting Heritage Center and habitat manager, who also served as Muhammad’s turkey hunting mentor. “We had an awesome hunt; it was a textbook roost hunt.”

Sumner and Muhammad set up on a generous landowner’s property, located a gobbler early and began to call.

“During the hunt, when we were waiting for the tom to come toward us, Travis said, ‘Patience gets more turkeys than calling ever will,’” Muhammad said. “This is the kind of knowledge and tactics I was seeking.”

“I’ve hunted with a lot of people, and Samaria was one of the best,” Sumner said. “She was attentive and applied all the information she learned in the class with grace.” 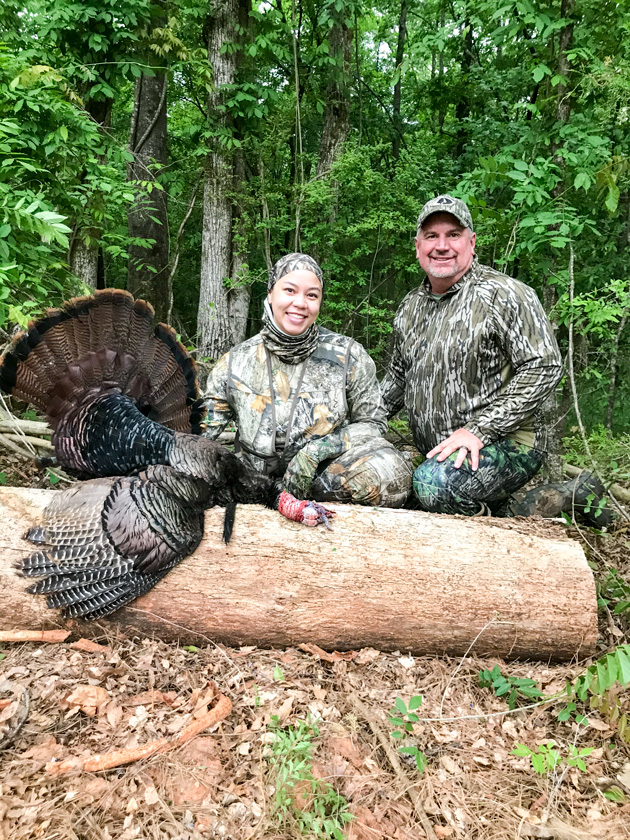 “My heart began to beat harder when the turkey had finally come off the roost and its calls had gotten significantly louder, but, despite the intensity, I knew to stay still and focused,” Muhammad said. “The other sounds of the woods felt like they began to quiet as all I could focus on was the turkey, which was getting louder and closer. At one point, the tom began drumming, and I could feel the low drumming vibrations in my chest. I was just peering through the brush, waiting for it to strut through, careful not to move a muscle.

“Finally, I saw its head and neck stick out through the brush in full strut, and I thought, ‘This is the best chance I’ll have. It’s now or never.’”

Muhammad felt the rush of adrenaline from the hunt, but she also was overcome with gratitude for the guidance she received from her mentors.

“It felt like they were truly happy to celebrate the milestones of my first hunt ever,” she said. 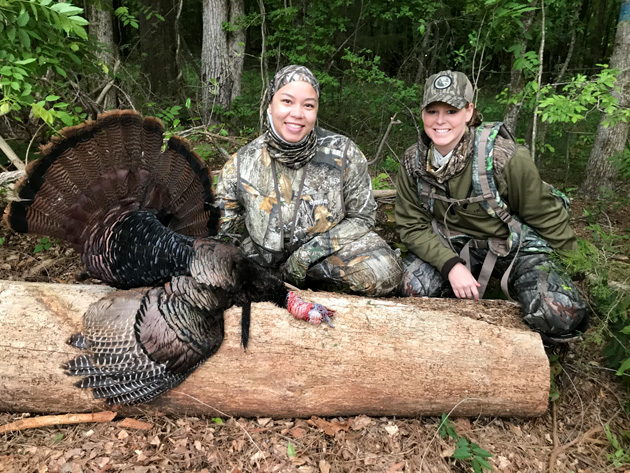 Added Sumner, “This is what turkey season is all about for me. My days of tagging and bragging are long gone. I could never shoot a bird again, but as long as I’m sharing and teaching this treasure with people who are interested, then that’s all that matters. This is what a successful turkey season looks like.”

Muhammad used her first wild turkey for multiple delicious recipes. She said she is equally excited about the NWTF’s upcoming mentored deer and dove hunts this fall and plans to continue her journey as a hunter and procurer of her own food.