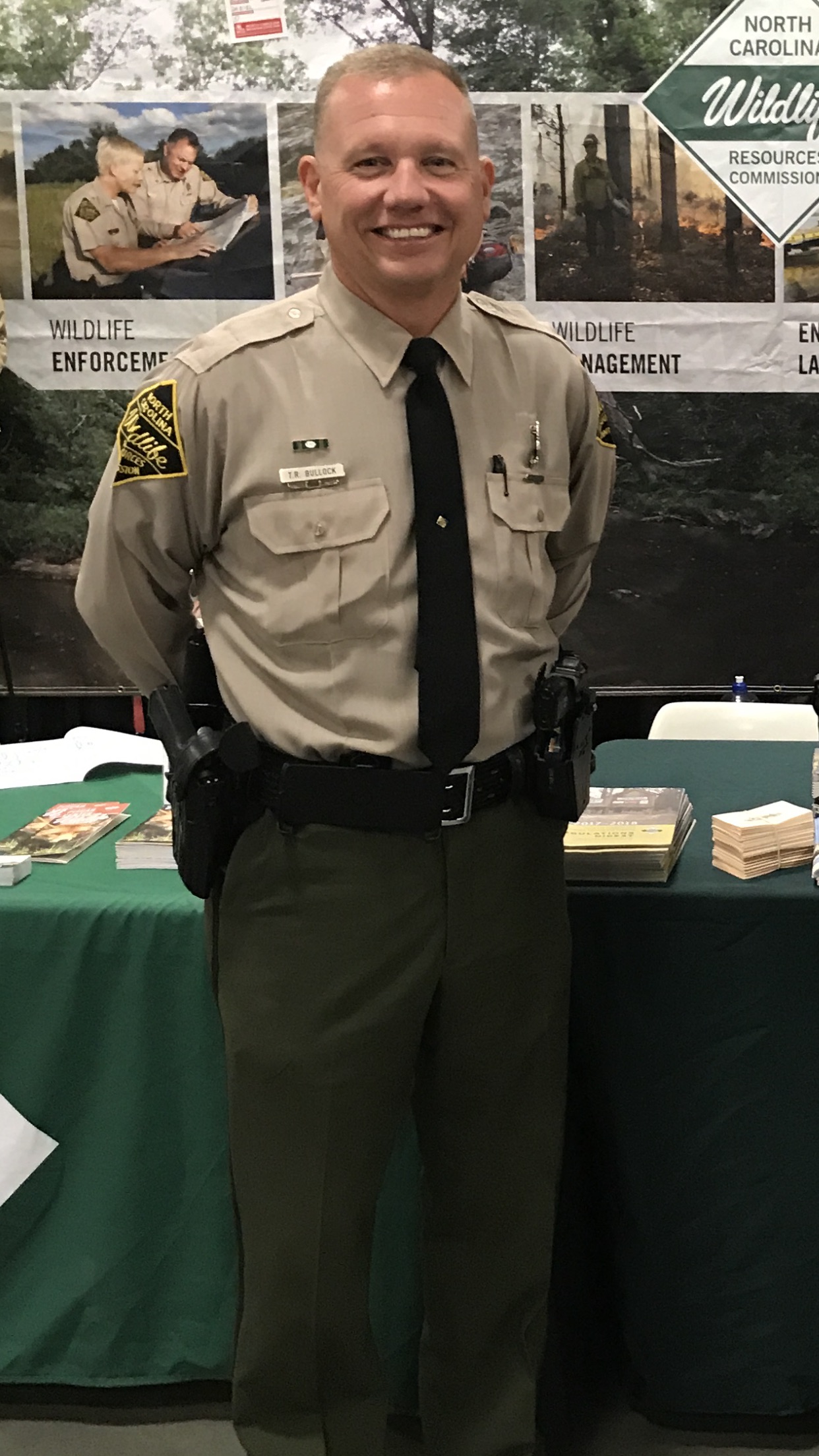 Bullock’s Cost-style, checkered short box call, made from Vermont butternut and orange agate won both the Division II Turkey Hunting Call Maker of the Year and Gibson Award, an aspiration of nearly all call makers.

Despite his acclaim as a master craftsman, Bullock hasn’t forgotten the journey that brought him into the world of call making, a journey consisting of heritage, conservation and commemoration.

“One of my childhood friends that I grew up hunting with, and who also became a game warden in North Carolina, was killed in a tragic accident,” Bullock said. “It was devastating to me. I shot my first turkey with him when we were kids.”

Bullock knew he wanted to honor his childhood friend and fellow game warden.

“Being that he got me into turkey hunting, I thought to myself, ‘What could I do that could be an honor to him related to turkeys?’ So I decided I am going to build a turkey call, and I am going to hunt with it, and I going to kill a turkey with it, and it would be something that I could carry forever and honor him every time I went hunting.”

Bullock has always had a fascination with turkey calls, but never considered making one himself, until he decided to commemorate his friend.

“I had zero experience and very few tools; I had very little of anything, but I loved box calls,” he said. “A friend let me use his shop, and it was absolutely one hundred percent trial and error.”

While that first call to honor his friend remains especially meaningful to him, he admitted that it didn’t sound great.

“I picked two woods, bocote and Osage orange, to do the call with, and anybody who knows anything about box calls knows those are probably the two worst woods you could match for a box call,” Bullock said.

Despite the learning curve, something clicked for Bullock. He began researching callmaking information, joining callmaking forums and eventually became part of the close-knit group of custom call makers.

“I built a long box and decided to enter it in the North Carolina competition, now known as the Southeastern Call Makers Contest,” Bullock said. “I had no expectations of winning.”
Meanwhile, Marlin Watkins, distinguished call maker who would make a lasting impression on Bullock, invited him over to his home and shop.

“I spent three days there, and he showed me stuff that took me so far ahead of the curve,” Bullock said.
While there, Bullock received a phone call with good news: he had won best of class and best of show in the North Carolina contest.

“Sometime around 2012, I met Mike Lapp, who would elevate my callmaking even further,” Bullock emphasized. “As with any great mentor, Mike would give me just enough information that I would have to strive to, by trial and error, to perfect my calls, and his mentorship still continues to this day.” 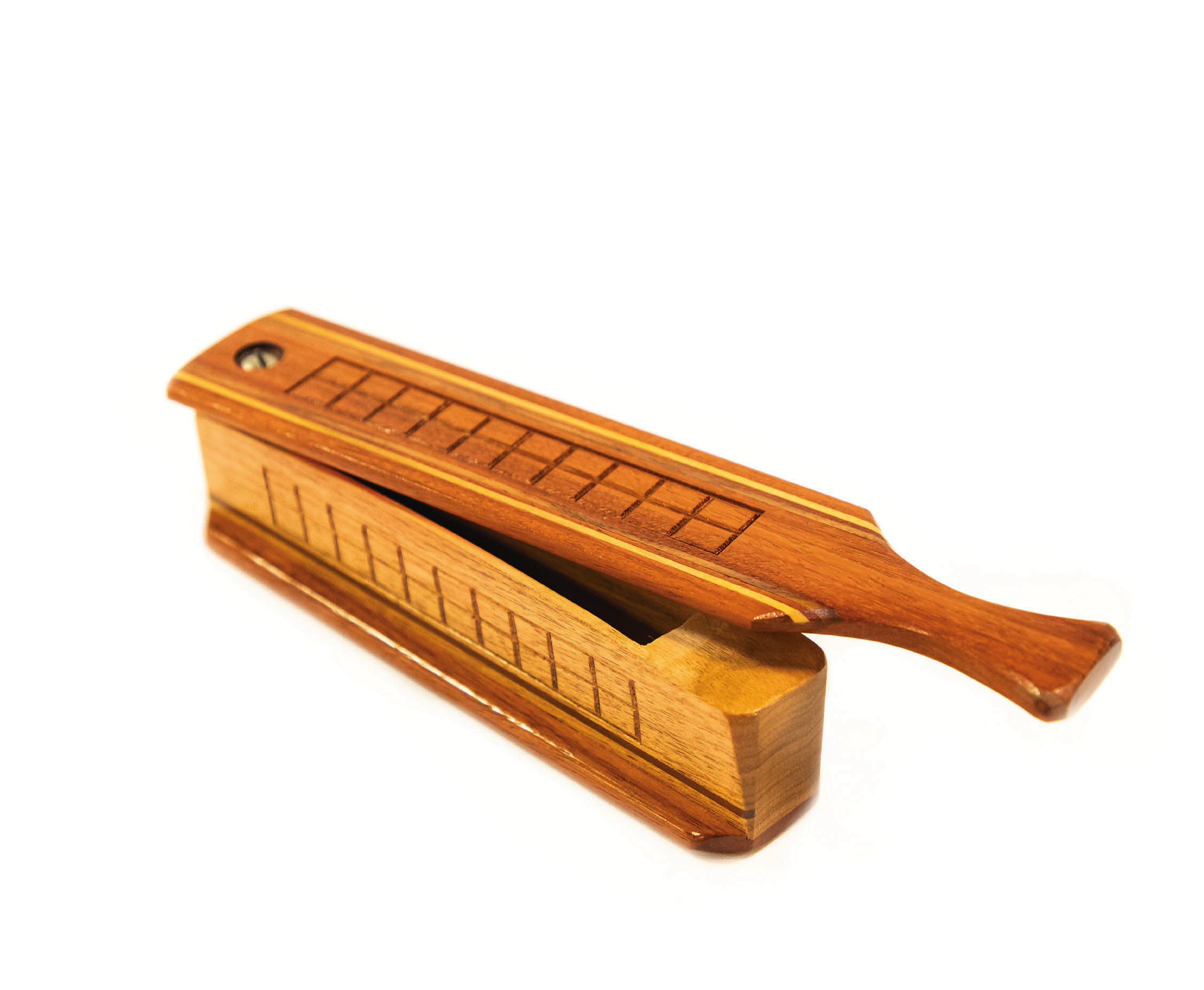 Bullock would continue making calls, competing and often winning numerous regional championships, all in between being a dad of four, a husband and full-time game warden. Bullock retired in June 2021, and, with his kids fully grown and out the house and his wife at work, he would spend an entire work day in the shop working on calls.

“When I retired, I said, I am going to get this to where I am extremely satisfied with the sound, and I was spending eight to 10 hours a day in the shop,” he said.

It wasn’t long after that he would craft his 2022 award-winning call.

“I built this call in September,” he said. “It was the same style as I’d been making, but I’m tuning it, and I’m finishing it, and I just couldn’t stop playing it. If you ever have that one call that you think just has everything, this call just had it. I kept playing it and playing it.”

Bullock would be in for quite the surprise at the NWTF 46th Convention and Sport Show. After judges reviewed all calls, Bullock was awarded the prestigious Gibson Award, given to the best-sounding box turkey call and named in honor of Henry Gibson, who patented the first box call in 1897.

“I was just beyond emotional because everything came full circle from the very first day I tried to build a turkey call to honor my friend who got me involved in turkey hunting, and here I sit with the highest honor you can get for a box call maker,” Bullock said.

About an hour later, Bullock would be in for another surprise.

“A callmaking friend of mine said ‘congratulations,’” Bullock recalled. “I said ‘thank you; I am very excited to win the Gibson Award.’”

“I’m not talking about the Gibson,” Bullock’s friend said. “You’re Call Maker of the Year.”