Mossy Oak’s Cuz Strickland knows a thing or two about training up a child. 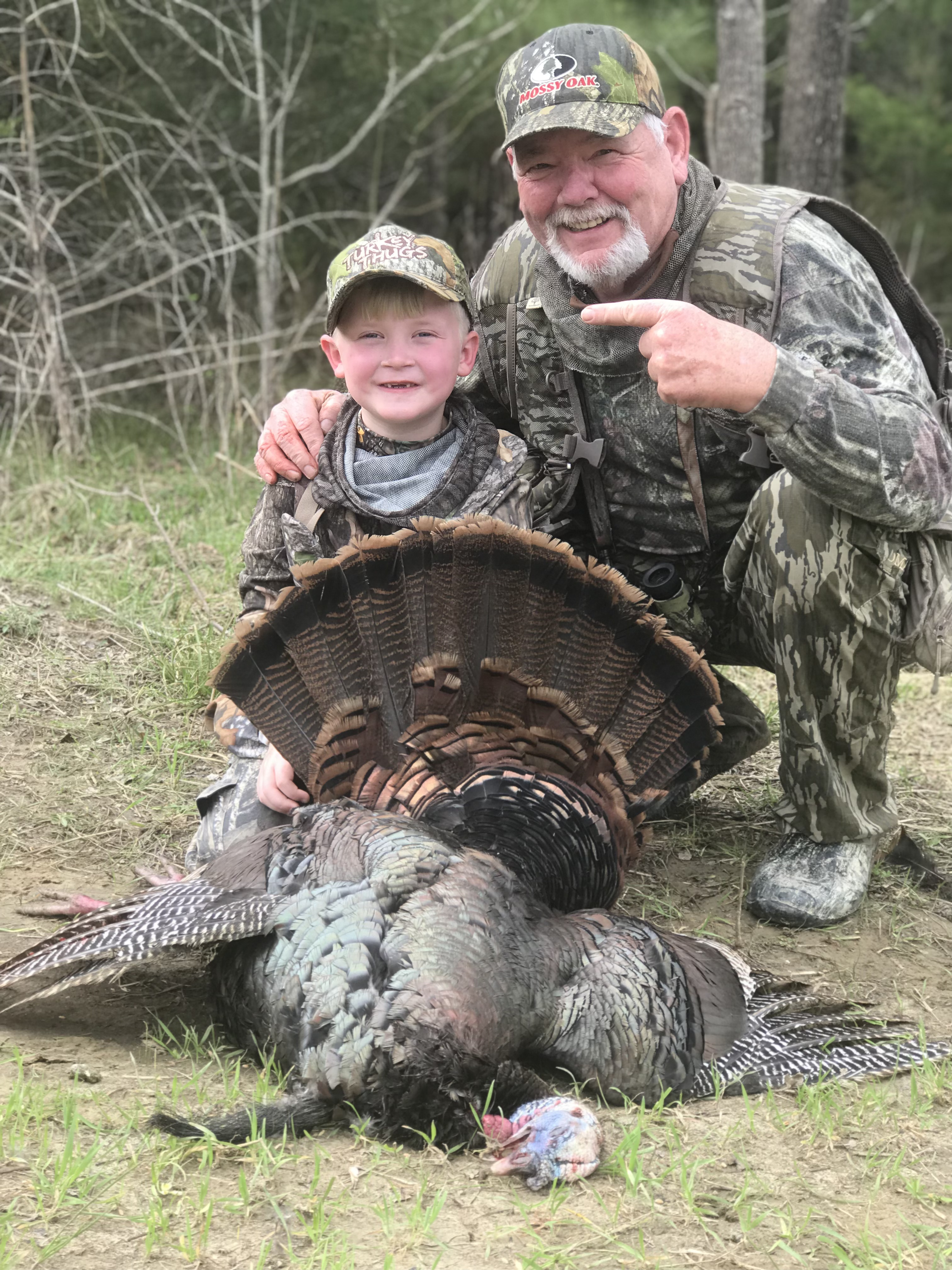 Long before turkey hunters posted footage from their cell phones on social media,** Ronnie “Cuz” Strickland lugged a full-size video camera and a separate recorder deck that, combined, weighed about 50 pounds through the woods and swamps of his native Mississippi. First, he captured turkey hunts for the Primos Hunting Truth videotape series with Will Primos and later he filmed throughout the U.S. for Mossy Oak’s Hunting the Country TV show.

But Strickland’s most popular videos, which he shoots with his smart phone, a GoPro and a handheld video camera, are now on his You- Tube channel Cuz 411, which often features turkey hunts with his three grandsons, each of whom killed his first gobbler at age 5. Through all his years of hunting and videotaping turkeys, the executive vice president for television and related media for Mossy Oak knows what it takes to get youngsters hooked on chasing gobblers.

“Kids all need a little adventure, and they all need a little responsibility,” said Strickland, who got started with his daughters Amy Tate, who occasionally hunted deer with him, and Lauran Ellis, a diehard turkey hunter who recorded a Grand Slam while in high school and has hunted the opening weekend of the Tennessee turkey season with her dad for the past 10 years. “Turkey hunting is something you can do where you don’t have to just sit there in a shooting house for three or four hours,” Strickland said. “You can explore. I always tell people when I’m taking them, whether they’re kids or grownups, ‘OK, you want to go turkey hunting or do you want me to guide you through this and tell you everything?’ And most people want to know everything. So, we’re pointing out tracks and scratching in the leaves, all kinds of things, spider webs, whatever it is. And kids are fascinated with that.

Strickland, 67, grew up hunting deer as a boy in Natchez, Mississippi, but said he was a selftaught turkey hunter. His high school football coach, Ed Reed, and the local barber were the only two people he knew who hunted turkeys. A magazine article about turkey expert Ben Rodgers Lee piqued his interest, and then he read the Tenth Legion by Col. Tom Kelly. “I said, ‘Wow, this is way cooler than deer hunting,’” Strickland recalls. “I was hooked then. I was like, ‘I’m going to figure this out.’ It took me a long time. I didn’t kill a turkey the first spring, and I’m not sure I killed one the second spring. I loved being out there in the spring, I loved the calling, trying to figure out how to use a mouth call.”

After 50 years of turkey hunting, his most rewarding hunts are with youngsters and with wounded military veterans. He’s done the latter with the Florida Cattlemen’s Association for the past 15 years during the opening week of the Sunshine State season. But a Catch a Dream Foundation hunt with then 8-year-old Ryan Welch, who’d just had surgery for a brain tumor, was the most memorable. Hunting in Texas with Ryan, his brother and father, it rained for three days. The rain finally stopped on the last morning and Ryan got his first gobbler.

His hunts with grandsons Walker Tate, 15, Matt Ellis, 13, and Ben “Cranky” Ellis, 9, who, like their grandfather, are all NWTF members, are always special. His granddaughter, Avery Tate, has killed a deer with a crossbow. “She hasn’t been bitten by the turkey bug much yet, but she will,” Strickland predicted. 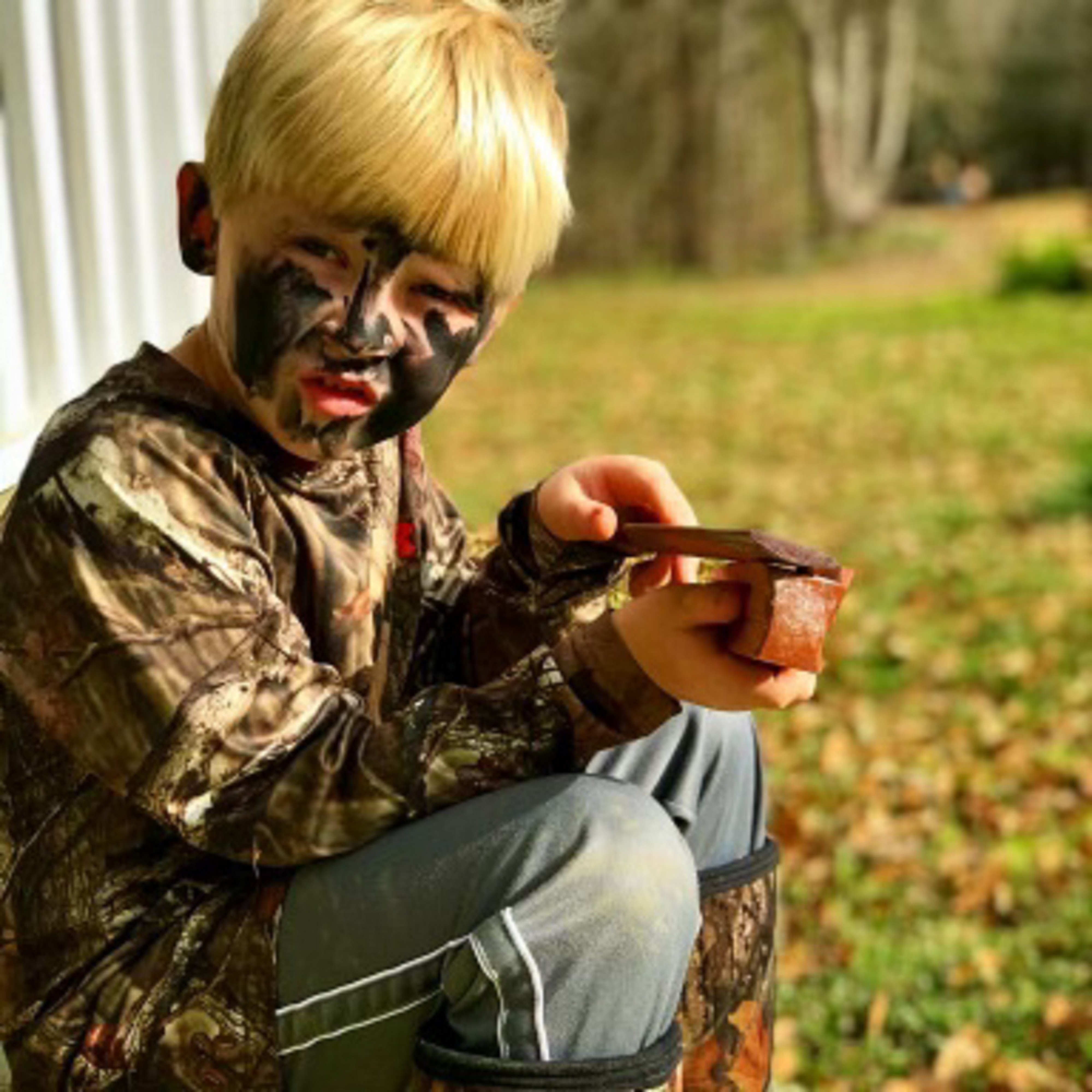 Strickland, who also does a weekly podcast with Lauran called A Fistful of Dirt, said the No. 1 rule with kids is that it’s their hunt. “I let them set the timing,” said the man the boys call Pop. “If we hear a turkey at daylight and he gets away, which is often the case, we’ll walk around a little while and I’ll say, ‘You let me know when you’re ready to go eat breakfast.’ It’s not going to be a death march until we kill a turkey, I just want them to enjoy it to where they’ll go back. I kind of let them dictate the pace.

“I never forced it on anybody. I say, ‘You want to go, we’ll go.’ If they don’t want to go, I won’t make them go. I want to offer it up and have it available. Turkey hunting builds character, teaches them a lot of lessons about life, and disappointment and failure and success and working hard and practicing.”

That was evident in the Cuz 411 hunts with Cranky (he kicked so much in his mom’s womb that his brother said he was one cranky baby and the nickname stuck), who hunted a gobbler they called the Devil over two seasons. When Cranky finally prevailed, he burst into tears. 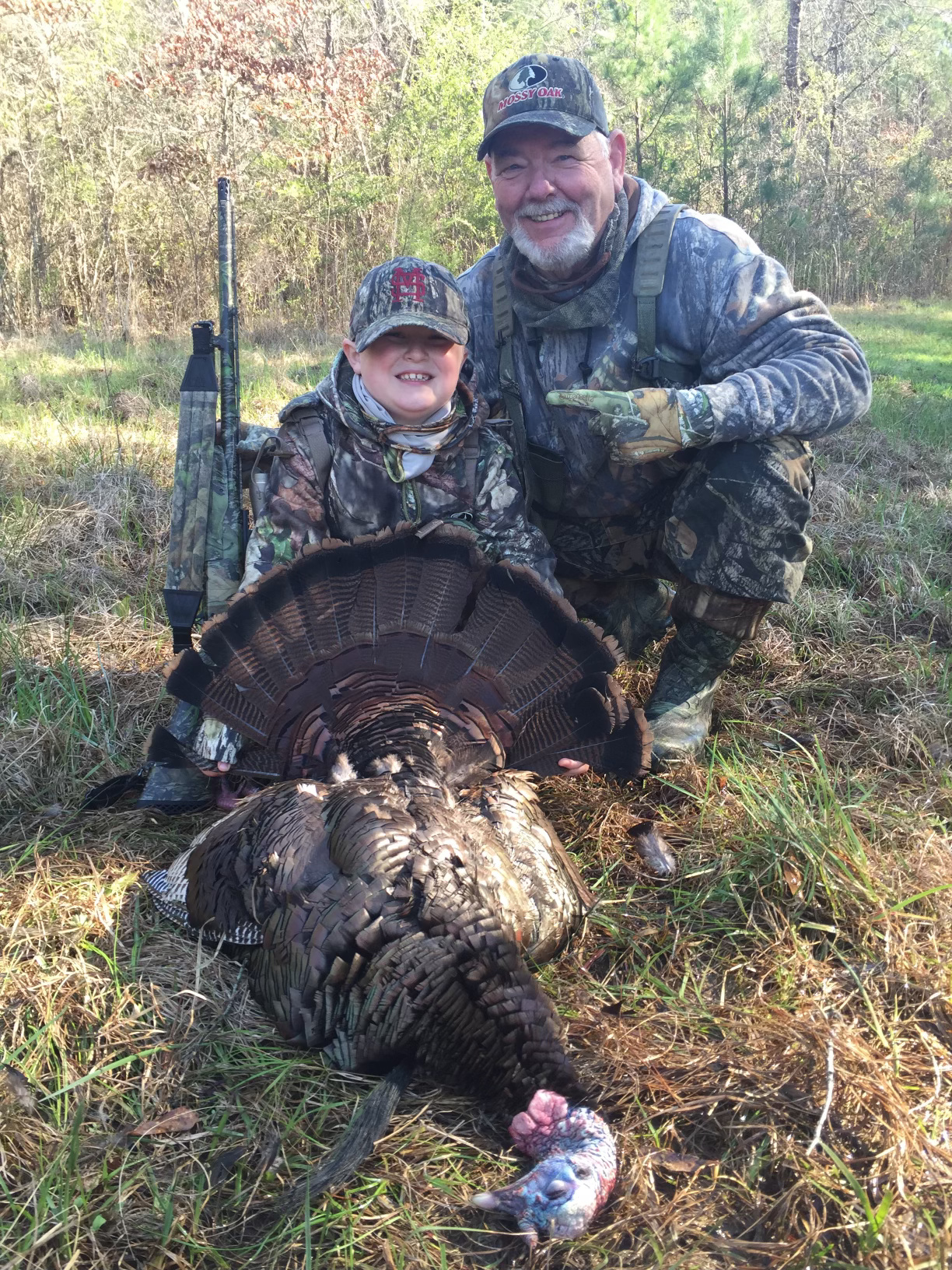 “I would explain to him that the harder it is and the more you stick to it, the better it’s going to feel,” Strickland said. “Man, you’re going to accomplish something that nobody’s going to believe. You just build him up, get him fired up about it. But at any time he didn’t want to do it, I’d say, ‘OK, let’s go back home.’ It ain’t about me, it’s about him. Same with the other boys. It had to be about them.

“Cranky stuck with it. I was pretty amazed, because we hunted that turkey 20, 30 times over two springs, in this real swampy place where he lived, and we were always sitting in mud it seemed like. We were both relentless. As long as he stuck with me, we were going to keep going.”

And because he always made hunting turkeys an adventure, the grandboys will keep going with Pop, even when they’re the ones taking him into the woods. 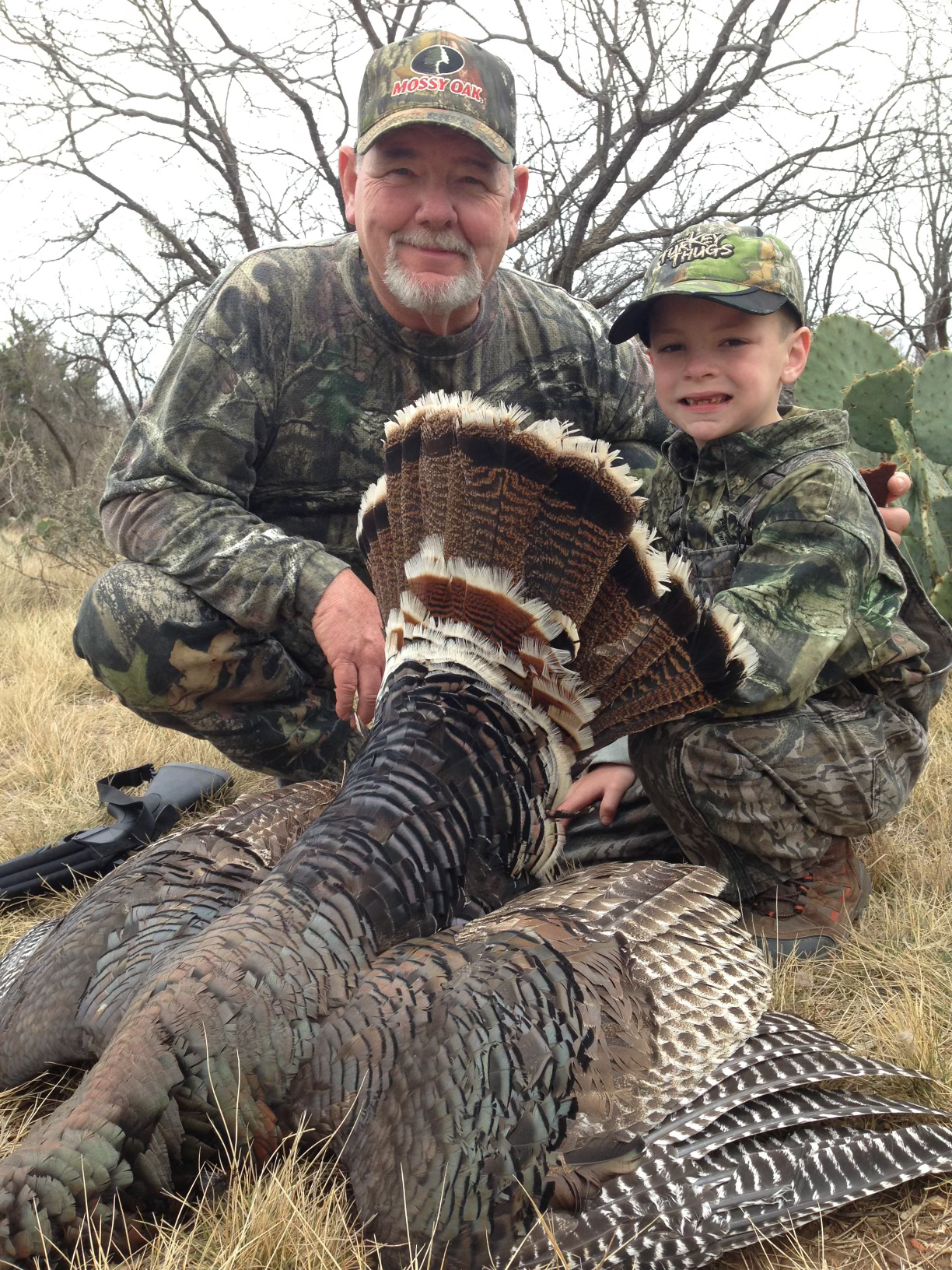 Ronnie “Cuz” Strickland got all three of his grandsons their first gobblers when they were 5 years old. He shared these tips for success:

- Hunt from a popup blind or tent, which conceals movement, but also allows kids to stand up and shoot.

- Attach a clamp to a tripod and rest the shotgun in it so kids don’t have to hold the gun when a gobbler takes his time coming in. “Set them up for success. It’s a little harder on you if you’re carrying a blind and a shotgun rest, but you either commit to that or you don’t. Give them every opportunity and that makes them proud and they want to go back.”

- If you’re hunting from the ground, have clippers to cut vegetation and build a blind, which is something youngsters can help with.

- Breakfast can be the highlight of a hunt and keep kids coming back. “I’ll take a snack or two, but usually I’ll make a big deal about let’s eat breakfast after the morning hunt. I’m not going to try to hunt all day with somebody who’s just going for the first or second time. Everybody needs to go to the Waffle House or whatever the local café is, wherever you can get a biscuit or a piece of toast and some eggs. That’s all part of the deal. They love that.” — S.W.

He started off his grandsons with a foolproof progression – BB gun, .22 rifle, .410 shotgun.

With BB guns he taught the boys about gun safety, such as keeping the muzzle pointed in a safe direction and always checking to see if the gun is loaded. Target shooting was always done with the .22 while wearing ear protection, so the boys could work on squeezing the trigger without fear of recoil or a loud bang.

“I see so many people hand a little 8-year-old a .270, that ain’t good,” Strickland said. “When that gun goes off, it’s too much for them, then they’ll start flinching before they pull the trigger.”
Shooting at turkey targets was done with a .410 loaded with 2¾-inch APEX Ammunition TSS loads.

“They would shoot that gun and smile because they were expecting a big kick and they didn’t get it,” said Strickland, adding that all of his grandsons killed their first gobbler with a .410 and TSS loads, which are lethal out to 40 yards. Now the boys all shoot 20-gauge shotguns.