Daily Rituals of the Wild Turkey

In the wild turkey world, grooming is a collection of behaviors called preening. They include dusting, sunning, anting, feather preening and stretching. These are especially vital to a turkey’s health and survival. They’re also critical to maintaining a gobbler’s stunning appearance, which fills a turkey hunter’s dreams.

Preening behaviors comprise a significant part of the turkey’s daily routine, second in time only to feeding. Most folks who have observed turkeys know their general routine. From the time a turkey’s feet touch the ground at flydown, it walks, talks, feeds, grooms, competes for dominance, mates, waters and loafs until it lifts toward a roost tree at day’s end.

Here’s more detail on a turkey’s daily grooming rituals and tips on how to apply them to a hunting strategy. 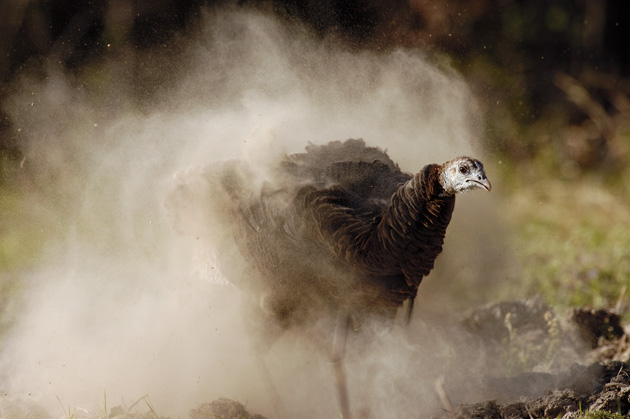 Dust bathing is a common bird behavior, especially with birds that spend most of their time on the ground, such as turkeys. It’s a flock activity that occurs throughout the day and between periods of feeding. Dusting can be comical to watch, as the bird crouches or lies on its side and flaps its wings wildly, effectively coating its body in dirt. Turkeys might dust at a favored spot repeatedly, which creates a bowl-like depression. Dusting precedes sunning and preening. Barely out of the shell, poults instinctively begin dusting at about 2 to 4 days old.

As with humans and their bathing habits, some turkeys might dust-bathe quickly, but others leisurely flop and toss dirt for longer periods, seeming to take much enjoyment in the exercise. I witnessed a young hen fly down from the roost, land in a food plot and immediately begin dusting. The hen was in the dust bowl for almost 30 minutes and appeared to doze off several times. The boss hen finally approached and, with several sharp head pecks, ousted the hen from her dusty reverie. 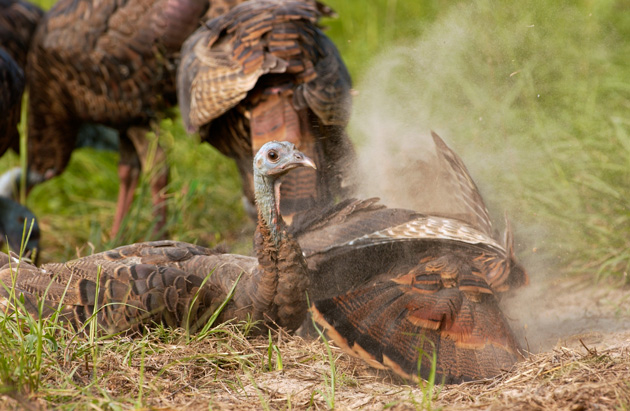 Dusting helps maintain plumage in a fluffy condition by removing the buildup of material on feathers, such as old secretions from the preen gland (uropygial gland). More on that later. Fine dust also can clog tiny breathing pores on the bodies of lice and other parasites that chew on feathers and suck blood.

Turkeys don’t always shake upon rising from a dust bath. I was once reminded of the perpetually dirty Peanuts character Pig Pen while photographing a hen dusting. She stood after a lengthy session but didn’t shake. Instead, she plucked clover in a small area for a half-hour and then walked the edge of a long field and out of sight, a small dust cloud billowing behind each step.

Sunning is an important step in a turkey’s daily grooming regimen. It usually follows a dust bath and precedes feather preening. SuNning is less commonly observed and might be confusing to those unfamiliar with turkey behavior. At first glance, a prostrate turkey soaking up the sun can appear sick or wounded. The bird typically lies on one side with the upward wing and leg extended and exposed to direct sunlight. For older readers, visualize a famous Mae West lounging pose. Other birds might simply crouch on the ground.

The behavior serves several purposes: absorbing heat for regulating body temperature, sustaining feather health and dislodging feather parasites. One theory suggests that parasites might be killed or forced to move away from inaccessible parts of the body to more accessible areas where they can be eliminated through feather preening. Sunlight also can kill feather-degrading bacteria. Sunning makes oil from the preen gland more liquid and easier to spread over the feathers.

Turkeys also use sunlight to remove moisture. Birds naturally congregate in open areas away from dripping trees after a rainy period. This also exposes them to sunlight and expedites the drying process. You might see birds with their wings slightly open to facilitate drying. Severe storms can damage feathers or blow them out of place. Extended feather preening is often necessary. A wet, windblown turkey is at a disadvantage to fly, making it more vulnerable to predators. 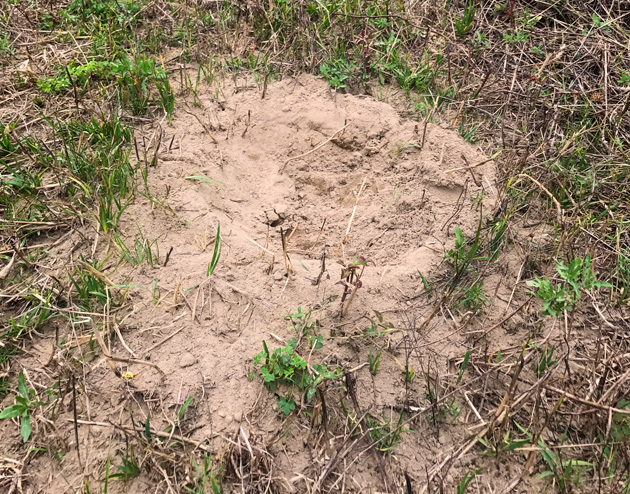 American ornithologist John James Audubon gave the earliest known description of this peculiar behavior in 1831. He described young turkeys as “wallowing” in anthills. Anting appears to be widespread and common but isn’t readily observed because it’s assumed the bird is dusting. Consequently, most current research on the behavior is performed in laboratories. More than 200 species of birds worldwide have been observed anting. Most are songbirds. However, ground-dwelling game birds such as turkeys and northern bobwhite quail also engage in anting.

Anting occurs in two ways: active and passive. Blue jays, for example, use ants actively by capturing, crushing and rubbing them on their skin or feathers. Turkeys passively ant. The bird crouches atop an ant mound and might rub its wings and tail on it, allowing the disturbed ants to crawl over its body.

What is the function of anting? Biologists have debated several theories for years. Each is based on the fact that only 24 species of ants are used in anting. All contain high levels of formic acid. Some suggest the anting process distributes formic acid, which is believed to help inhibit parasites such as feather mites and biting lice. A widely held theory holds that birds use ants to soothe irritated skin. Anting is more common in late summer and early fall, the period of heavy feather molting, when skin is irritated during rapid feather replacement. Birds smear ants on their skin and feathers where new feathers are growing. Formic acid feels hot to the touch and penetrates the skin easily. In theory, the acid might soothe the bird’s irritated skin. 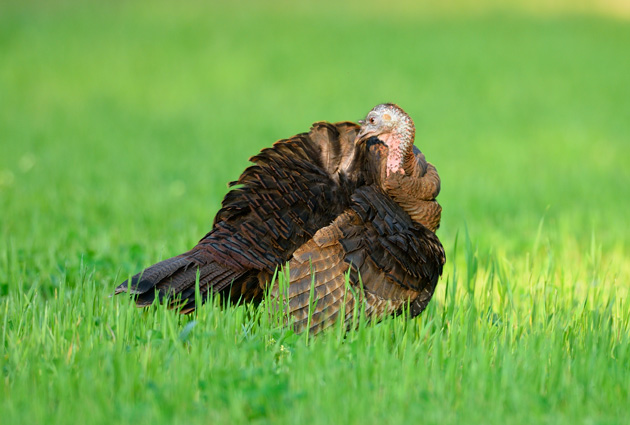 Preening is how a bird grooms its feathers to maintain them in optimal condition. Most birds feather preen multiple times daily to remove dirt, dust and parasites and align each feather in the best position relative to adjacent feathers and body shape. As mentioned, dusting, sunning and anting are part of the overall preening process. Think of them as pretreatments that prepare the feathers for preening.

Between 5,000 and 6,000 feathers cover a turkey’s body and grow in patterns called feather tracts, or pterylae. The tail has an average of 18 long quill feathers. Wings have 10 primary feathers and 18 or 19 secondary feathers. Turkey feathers have eight shapes that assist in body covering, insulation, waterproofing, flight, display, protection and recognition. No wonder they spend so much time preening.

Feather preening has two functions: First, it ensures the durability of the layer of contour feathers, which must be correctly aligned, with all interlocking barbules in place. Also, it distributes uropygial (preen) gland secretions onto the skin and feathers.

What is the uropygial gland? (See the lead photo.) Located at the base of the tail, it secretes an oily, waxy substance made of primarily fatty acids that helps keep feathers flexible and waterproof. Birds spread the oil using their bill to each feather until they are evenly coated.

- Feathers moisturized with preen oil are strong, flexible and better able to withstand the stress of flight.

- Feathers aligned for optimum waterproofing and insulation protect the bird against adverse conditions, such as extreme temperatures and soaking.

- During feather molting and regrowth, preening removes tough sheaths from newly molted feathers and helps put them in the proper position more quickly. 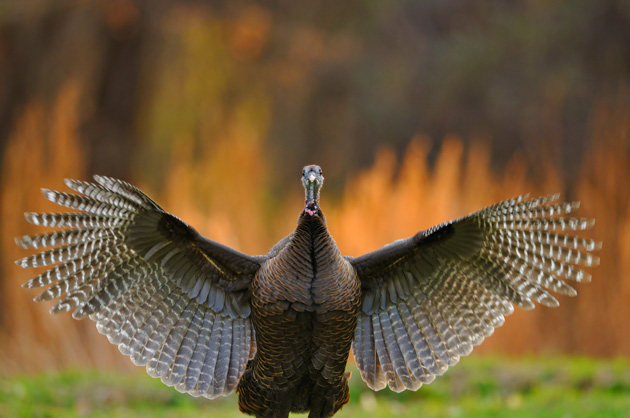 Leg and wing stretching appears mainly to loosen and flex muscles in preparation for flight. However, stretching is also observed as part of the preening process. This stretching behavior likely helps provide space between each feather so each can be stroked and groomed effectively. Preening requires a bird to assume various positions. Stretching and feather fluffing helps align all the feathers after a section has been preened. 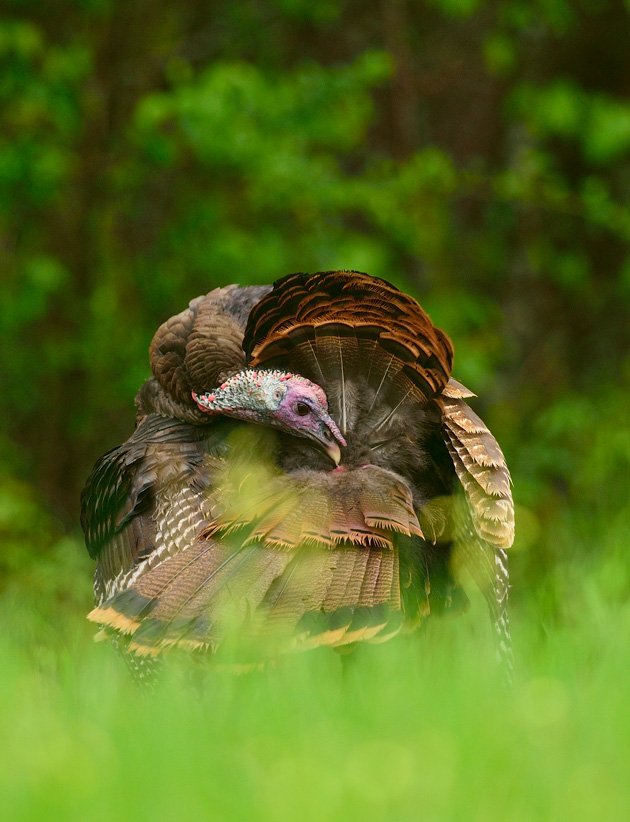 When flocks gather and breed, spring turkey hunting can be tough. The early morning gobbling, cutting and yelping free-for-all winds down, and you weren’t close to being in the game. The flock has gathered, gone quiet and moved on. It’s tempting to give up and head to camp. Odds are, though, the turkeys you’re hunting haven’t traveled far. They’re simply following a pattern of daily rituals: feeding, calling, breeding, preening and loafing through the day. Use a turkey’s daily rituals to plan a hunt strategy, especially when gobblers are henned up. It can be a long, tough hunt, but those are typically the most memorable.

During his years as head turkey guide at Alabama’s famed White Oak Plantation, Bo Pitman didn’t give up when faced with such scenarios. Legendary for his successes on all-day hunts, Pitman relished the challenge to out-turkey a turkey, even if it took until roost time. A sign posted on the lodge’s liar’s porch wall greeted arriving hunters. A succinct three-word testimony to his hunting prowess read simply, “Bo knows turkeys.”

Pitman is an old-school turkey hunter; an expert on turkey behavior, reading sign and, as he calls it, hunting on turkey time. Years of spending all day in the woods observing turkeys, listening and reading sign gave him the confidence to stay with a flock until he and his hunter could set up in the flock’s line of travel. Pitman knew from carefully flanking turkey flocks that they are vocal as they travel and feed, pausing intermittently to preen, dust, sun and loaf. He also knew preening behaviors take up a lot of a flock’s time.

Those were good times for Pitman and his hunter to make a move and attempt a setup in the birds’ line of travel. Pitman’s strategy required concentrated watching and listening to keep track of the flock, combined with butt-numbing patience and spare calling, mainly soft feeding and contentment sounds, and leaf scratching. Hunts might last all day, requiring multiple stealth moves and setups — the turkey hunting version of 3D chess. Usually, Pitman eventually outmaneuvered the turkeys and guided his hunter to the best place at the precise time for a face-to-face with an elusive Southern gobbler — the ultimate reward for dogged perseverance.

During the incubation period, Pitman knew that hens take brief breaks away from their nest early and late in the day to feed, water, dust and preen. He’d scout and set up his hunter near dust bowls close to nesting habitat, knowing lonely gobblers would cruise those areas searching for hens. Again, he called softly, adding non-vocal sounds with confidence the hen’s daily dusting and preening rituals could help bring a gobbler within range.

Pitman often said the best turkey hunters are the ones who hunt on turkey time. Translated: Successful hunters are committed. They learn turkeys’ daily rituals, and what the birds are doing and where they are going. They will do whatever it takes to be there when they arrive. Yeah, Bo knows turkeys.