“Is he close enough yet”?  Dalton said.

“Not yet. He’s 70 yards out,” I responded. I could see the excitement in Dalton’s face as the big tom worked his way to us. I gave a soft series of clucks and purrs to entice him closer.

“But he looks so close.” Gobble, gobble! Pfft  dummm … He was strutting now, moving closer.

“Wait until he gets past the tree; when he stops and sticks his head up, shoot him,” I coached Dalton.

“I can get him at the range!” Dalton said.

“I know you can,” I replied as the longbeard continued to rain thunderous gobbles down on us. “Just be patient. Here he comes, get ready.” I could feel the excitement building in me and wondered how Dalton was doing with his nerves and whether his shooting would be affected.

“Let him have it!” Boom! The tom rocked and almost fell over but straightened up and started to run. Dalton’s Mom, Heidi, covered her eyes with her hands and later said, “All I could think to do was pray he would hit the turkey.”

“He didn’t go down! Shoot again!” Boom! I didn’t see what happened with the second shot, because I was already moving to another window in the blind and trying to get the zipper open. When I did, I could see the turkey still running 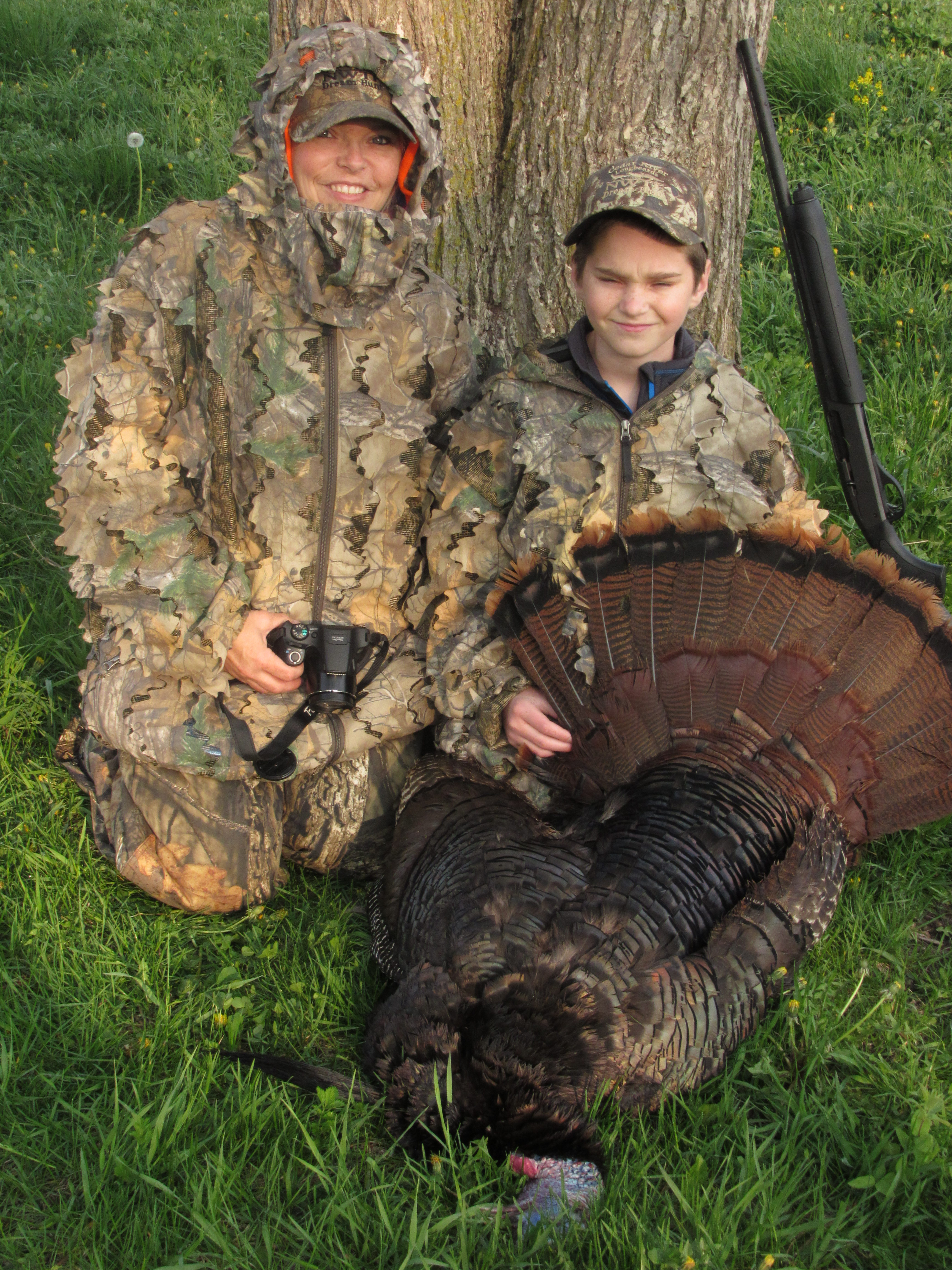 Dalton Lundon, who suffers from Fanconi Anemia (an inherited disease which affects his bone marrow’s ability to make red blood cells), his mom and I were hunting turkeys as part of the sixth annual Dream Hunt. The Dream Hunt is a guided turkey hunt for terminally ill and disabled kids. The Cedar River Longbeards, a local chapter in Minnesota, partners with the United Special Sportsman Alliance, which registers and sends us the kids to take hunting.

The USSA is a nationwide organization that grants hunting and fishing trips to disabled and terminally ill children. Brigid O’Donoghue is the chief executive officer and Dean O’Brien is the director in Minnesota. They hold nearly any hunt imaginable all over the country for deserving kids.

The Cedar River Longbeards started the Dream Hunt in 2011. One of the members had been involved in a similar hunt in Illinois the year before and got us in contact with USSA. Now, we just had to figure out who would allow us to hunt on their land, who could be a guide and where we could stay.

We immediately thought of Ironwood Springs Christian Ranch and its Miracle Lodge. This is a beautiful log structure designed and built for folks with disabilities. All the rooms are handicapped-accessible, and the lodge has lots of activities available for those who are not hunting.

Our hunters start at Cabela’s in Owatonna, Minnesota, where they get their licenses and are outfitted for the hunt. We then caravan to the Miracle Lodge, where we settle the hunters and their families into their rooms and then head to the range to target practice.

When dinnertime rolls around, we gather in the Lodge for PaPa Murphy’s pizza and a short program to introduce the hunters and recognize the sponsors and landowners. Then it’s off to bed: It’s going to be an early morning.

Most hunters are up and out by 4 a.m. after having breakfast and packing lunches, which are provided by Superfresh Produce in Austin, Minnesota. The hunters and their guides head to their preset blinds and wait for the turkeys to start the show. The guides do their best for the hunters, but we all know how turkeys are, and it doesn’t always go according to plan. That evening, we have a great meal provided by HyVee grocery store and swap stories.

Due to the nature of some of our hunter’s physical limitations, we have had to come up with some very specialized equipment. We have copied a design first created by the folks at Special Youth Challenge Ministries of Iowa. It holds a shotgun on a swiveling stand to allow for aiming at a moving target. The shotgun is scoped and sometimes outfitted with a device that holds an iPad, allowing multiple folks to see what the shooter sees in the scope. The gun is fired by a battery-operated, dual-push button trigger system that requires two separate buttons to be pushed. One button is pushed by the hunter and the other by either the guide or a parent. In theory, this should prevent misses; it helps, but no system is foolproof. When turkeys are around, strange things can happen!

We hunt both Saturday and Sunday, if needed, in all kinds of weather as long as the kids want to and are able to hunt. This event is all about the kids and their families and is meant to be an escape from their normal routine — a chance to do something they may never get to do otherwise.

As Dalton pushed the shotgun out the blind window to take shot No. 3 at the gobbler, all I could think was: “That turkey is a long way away!” But at the sound of the shot, the gobbler rolled head over heels in the long grass.

Now it was up to me to make sure the turkey didn’t get back up. I unzipped the blind and ran as fast as I’ve run in years. I thought I had gone far enough, but still no turkey. I turned and looked back toward the blind to see Dalton and his mom just coming out of the blind. When I turned back around, I saw a tail feather lifted just above the grass 15 yards away. I got there and quickly stepped on the turkey’s neck. He was ours! Heidi said it was the best Mother’s Day gift she could have wished for.

Dalton’s turkey weighed over 25 pounds and had 1½-inch spurs and two beards: a real whopper of a turkey and almost as big as Dalton himself. I told Dalton and his mom they had seen two rare things that morning: a double-bearded gobbler and this fat, old man do a 50-yard dash!

Last spring, we took 15 kids hunting over the weekend and killed seven turkeys. The planning for Dream Hunt 2017 is already under way. I like to think that all the work our committee and volunteers put into this hunt gives these families and kids memories that will last a lifetime. I know they will for me. 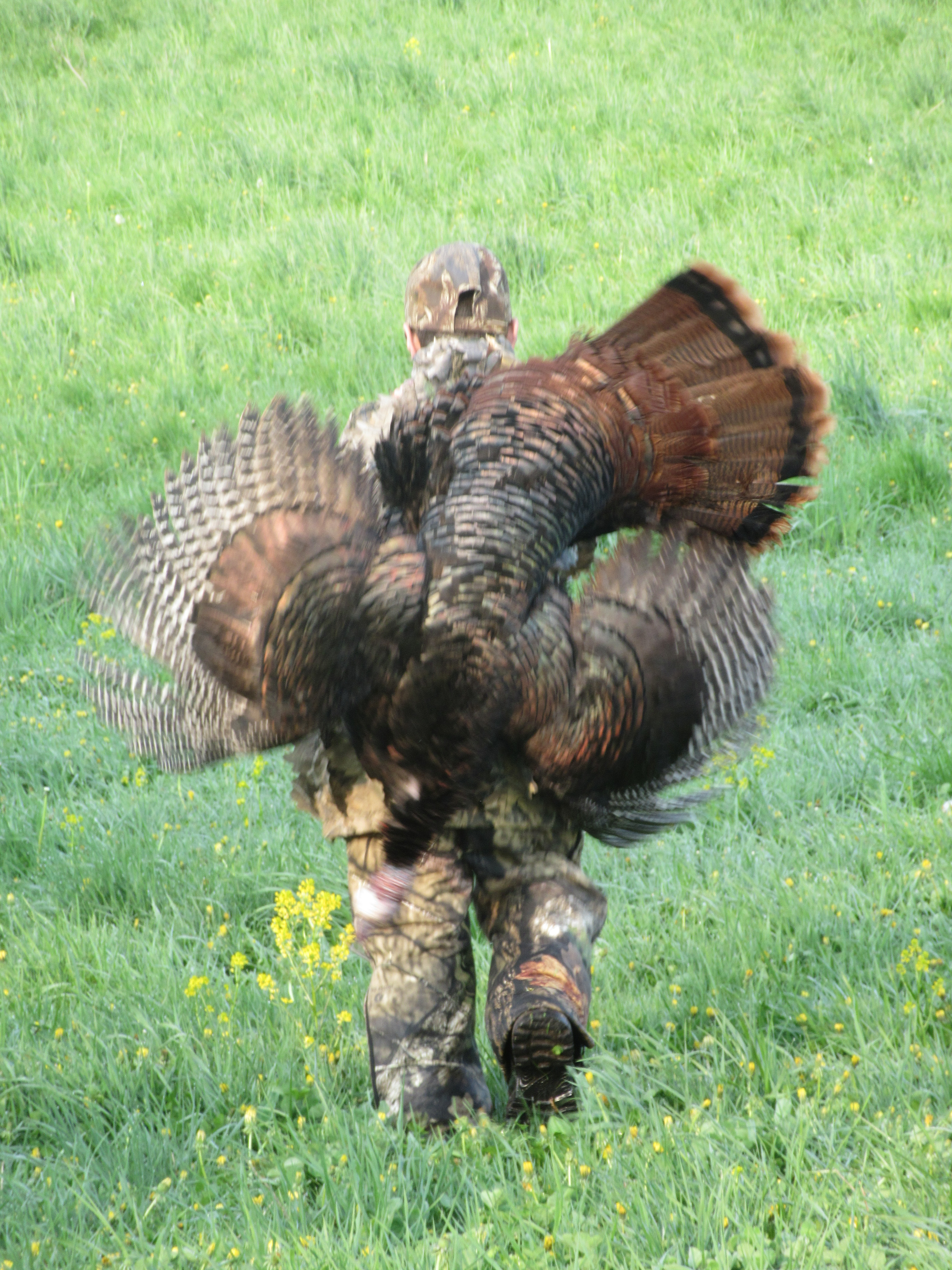