You want a new challenge for hunting spring gobblers so you purchase a .410 bore shotgun designed for turkey hunting and the next generation of extra dense shot, such as tungsten. The shotgun probably has a complete camo finish, is equipped for optics, is lightweight and you have an extra-full choke tube. It served you well during the spring turkey season, but how else can you use it this fall?

If you are a squirrel hunter, or would like to be, the .410 turkey gun you have can be an excellent fall and “mulberry season” squirrel gun. By matching the ammo available to your specific gun, you can expand your hunting season and take home some excellent game for the pot. 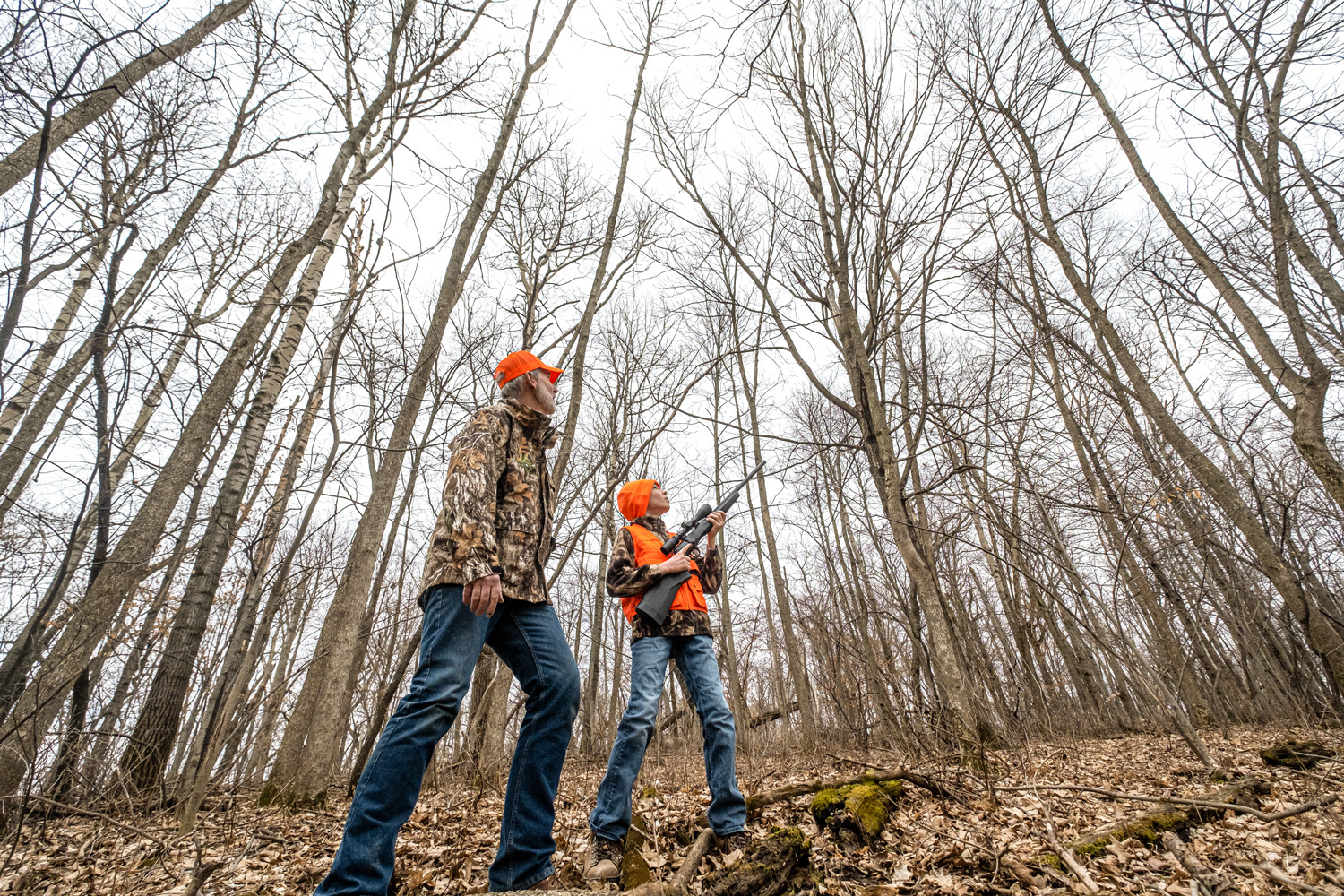 The .410 shotgun can be ideal for squirrel hunting because it is lightweight and easy to carry in the woods and quick to point at a fleeting target. The recoil is low, as is the shot report. Because it is a short-range gun it’s much safer to use in areas populated with farm animals or buildings. Also, being a short-range gun, it is a challenge to stalk within range of squirrels.

To establish what that range is, I have used a laser rangefinder to judge the longest shot I might take in the tops of mature beech, hickory and oak trees where I squirrel hunt. I found that the longest shot would be 35 yards, with 90% of the shooting at less than 30 yards. Also, being a shotgun, the .410 is more forgiving than the .22 rifle when quick shots are necessary in dense foliage.

At this writing there are several 3-inch chambered .410 shotguns designed for turkey hunting that can become excellent squirrel guns. They include the Mossberg 500 Turkey, Savage 301 Turkey and the TriStar Viper G2 Camo. All have a camo finish, 26-inch barrels and are equipped for optics mounting. All they need is to find the right choke tube and ammo. 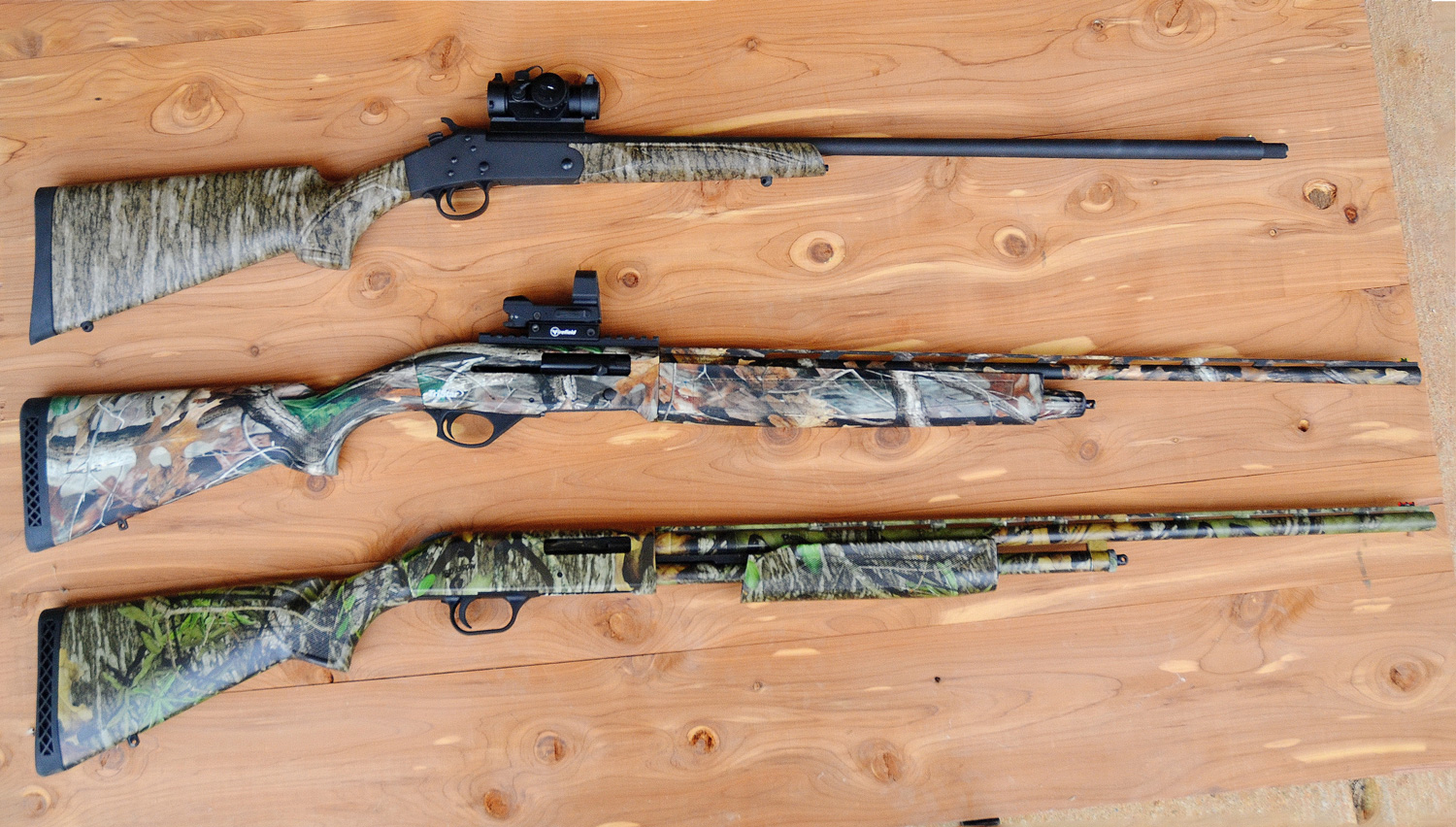 At the same time the new .410 shotguns dedicated to turkey hunting were introduced, new .410 shotshells with extra hard shot loads, such as the Federal Premium Heavyweight No. 9 TSS were introduced as turkey loads. These new .410 loads have since proven themselves on spring gobblers in states where turkey hunting with a .410 is legal. TSS is an alloy comprised primarily of tungsten. It is 56% denser than lead, and is harder than steel. The increased density retains velocity and the hardness prevents pellet deformation, which results in downrange pattern efficiency and deep penetration.

If it works on spring gobblers, I wondered how it would stack up against the more traditional 3-inch .410 loads of No. 6 and No. 7½ lead shot at squirrel shooting ranges. I decided to give it a simple range test.

As I stated above, my longest shot is usually inside 35 yards so I decided to set up a pattern board 35 yards from my bench rest. I used NRA life-size squirrel targets. I had a Savage 301 Turkey .410 shotgun on which I had mounted a Bushnell RXS-250 Reflex Sight. To conduct the simple test, I shot five targets each with the new No. 9 TSS, No. 7½ lead and No. 6 lead loads. I found the extra-full choke tube that came with the Savage shot the lead 6 and 7½ loads with uniform patterns. For the No. 9 TSS load, I discovered I needed a modified choke to get my desired uniform pattern.

After shooting five targets with each load, I counted the number of pellets that was in the vital areas (skull, heart-lungs and spine) of each target and averaged them. At 35 yards, each of the three loads shot a squirrel-killing pattern, but as might have been expected, the No. 9 TSS load shot the most consistent kill pattern with a five-shot average of eight pellets in the skull, nine in the heart-lungs and four in the spine.

While the tungsten alloy load is a highly effective load at the extreme range for shooting squirrels, there are a few things to consider before running out and buying the ammo for your next squirrel hunt. The TSS loads, as of this writing, were about seven times higher in cost than lead shot. That’s an expensive squirrel stew. Also, I saw on the targets I was using that the high number of powerful No. 9 pellets hit much more of the squirrel body than the lead pellets, and in the real world that is a lot of meat damage.