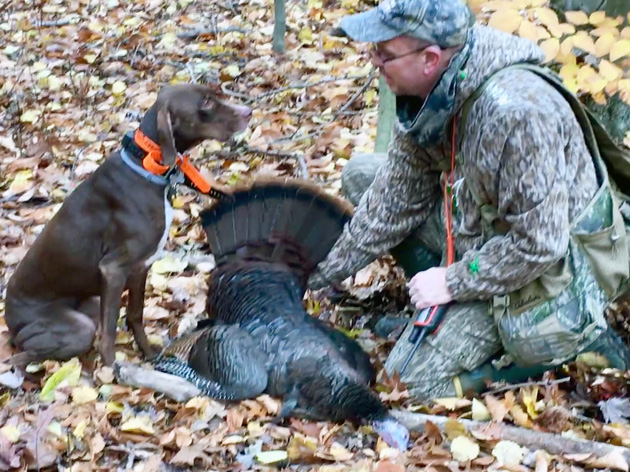 Acquiring a puppy is the obvious first step in the turkey dog journey. Thoroughly covering that topic would require a separate article. Experts agree, however, that you should look for a pup from an established, proven turkey dog line. After that, the training process begins.

“Within a few days of bringing a new puppy home, we begin the basic obedience training, along with building a bond with our new dog,” said Brett Berry, a veteran turkey-dog hunter and owner from Bristolville, Ohio. “I think this is the most important step in owning a dog. It’s up to you to teach them the basic commands: come, sit, stay, no and their name. Praise them when they do what you ask them to do.”

After a puppy becomes familiar with its new surroundings, you can introduce it to turkey-specific activities.

“I always start a puppy by playing with turkey wings and trail-dragging wings for them to track,” said Marlin Watkins, a longtime turkey dog owner from Ohio. “People expect too much out of a pup at first because they don’t realize a puppy cannot see things far away until 12 or 14 weeks. By that time, you can encourage them to chase birds and butterflies and praise them for it.”

Berry agreed. He begins by letting a pup smell a turkey wing and later starts brief sessions — no more than 20 minutes two or three times per week — in which he encourages them to chase the wing. When the pup grabs the wing, he lets them chew on it for a couple of minutes but then returns the wing to the freezer.

“The next step is to tie a wing to a fishing pole and drag it in front of the pup just out of reach as they chase it,” he said. “After a couple of weeks, we move to hide-and-seek. I put my pup in a crate or kennel inside my garage, grab a wing from the freezer and show it to them. I continue into my back yard, hiding it. Always check the wind direction, and hide it upwind. Allow the puppy to hunt for the wing as you both work the yard hunting for it. After four weeks of this game in the yard, my puppy has grown enough to wear a tracking collar, usually between 3½ to 4 months old. Then I begin 300- to 500-yard drags in the woods. Two 20-minute wing-training sessions a week is all I do. However, we play chase and barking games every day. You can do this with a ball, toys or big water bottles. Keep it fun, all the while encouraging them to chase and bark.”

During that early training process, you should also work with the dog on basic obedience and, when the pup is old enough, acclimate them to gunshots as you would with any hunting dog. Also, Watkins said, work with the pup on bag training, as turkey dogs must return to their handler’s side after a flush and then sit still — often under cover or in a bag — as callers work birds to the gun.

“Bag training should start as soon as you get the pup,” he said. “In the evening after they are ready to go down, bag them and pet them, or just cover them and pet them. But either way, make them lay beside you. You will thank yourself for this the first time they break birds.”

As the pup grows into its first season, take it hunting, and get it on as many birds as possible. Most pups endure growing pains, but Watkins said repetition helps turn them into polished turkey dogs. As the dog matures, it should range several hundred yards but check back with the handler occasionally. 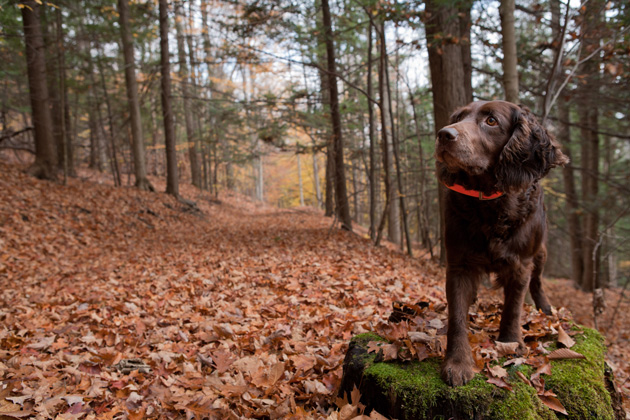 Most dog hunts are straightforward: The dog searches for birds, breaks up flocks and then barks during the scatter. Then, hunters set up and attempt to call birds back, as fall turkeys — especially family groups — typically want to regroup. Of course, the process involves many subtle considerations.

“When we arrive to hunt, I check wind direction,” Berry said. “This helps me decide how to approach and hunt that property. I like to hunt a crosswind or into the wind. This helps my dogs locate the flock easier. Turkey dogs generally wind the flock and, with good scenting conditions, can do this from great distances. On several hunts, I’ve seen my dogs wind a flock at more than 300 yards.”

After the initial break, many dogs return to the flush site to search for and further scatter running turkeys. The scatter might take 15 minutes and cover 500 to 700 yards, Berry said.

“After the break, the setup point is the most important decision you make,” Watkins said. “In flat ground, set up at the break point or 100 yards toward where most birds flew. In big mountain country, if you’re on the side of the mountain, go down 200 yards or more. If you’re on top of the mountain and birds flew down both sides, set on top. In small, steep, rugged country, if birds scattered to the other side, you may have to get on that side or at least down far enough to shoot across to that side.”

Berry also looks for two or more edges that come together, as such areas make great setups.

“Turkeys will follow these edges while trying to regroup, giving them the security of thick cover if they need to escape,” he said.

After the flush, the dog should return to the handler’s side and lie down, usually in a camo bag or under similar cover. Then, hunters can begin calling to lure birds back. During the scatter process, Watkins and Berry try to determine what type of birds the dog has flushed: adult hens, adult gobblers, a mixed flock or a family group (hens, jakes and jennies), as that determines their calling approach.

“Depending on the flock type, many times we have a shot opportunity within 20 minutes,” he said. “Adult hen and gobbler flocks usually take longer to reassemble. This is usually the case but not a rule of thumb. We’ve broken gobbler flocks and have harvested an adult gobbler within 30 minutes of a setup. Then there have been times where it took up to three hours before hearing or seeing a gobbler.” 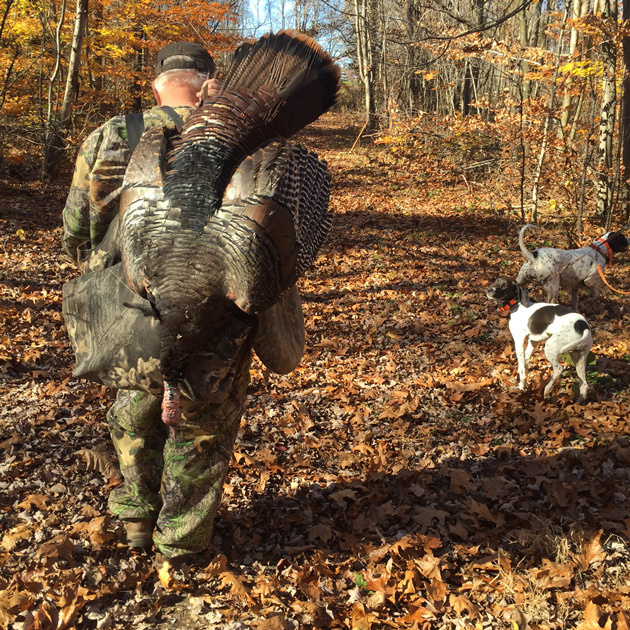 Veteran turkey doggers agree that fall hunting with dogs is something every turkey nut should experience.

“It’s by far my favorite turkey hunting,” Watkins said. “You get to see the dogs work and do their part. It’s more social because you can have four friends with you and split up in two groups. And fall hunting teaches us far more about the wild turkey and how to hunt them in spring or fall.”

Tag along on a dog hunt this autumn. Or get a pup and start your own hunts. Either way, you’ll be introduced to a new world of turkey adventures and the joys of sharing the woods with a canine companion.