Film Your Hunt this Spring with the Tactacam 5.0

Initially, the thought of filming my hunts didn’t seem too interesting, considering 75% of the time I do not get a shot opportunity. As an average hunter, turkeys are already hard enough to call in, let alone harvest, and adding filming to that process felt like I was further complicating an already-arduous task. ‘I’ll just leave filming to the pros,’ I would think.

It’s good to challenge one’s preconceived notions from time to time, though, and that’s what I did with Tactacam’s 5.0 Ultra HD Sporting Camera. With an incredibly sleek and user-friendly design, in addition to 4k filming capabilities that simply sync with your cell phone for editing and social sharing, my previous thoughts on bringing a camera into the turkey woods have since been rescinded. I am determined to shoot a gobbler with my Tactacam 5.0 this season, or, at the very least, be able to relive the cool, spring mornings of solitude, simply by looking at the photos on my phone. 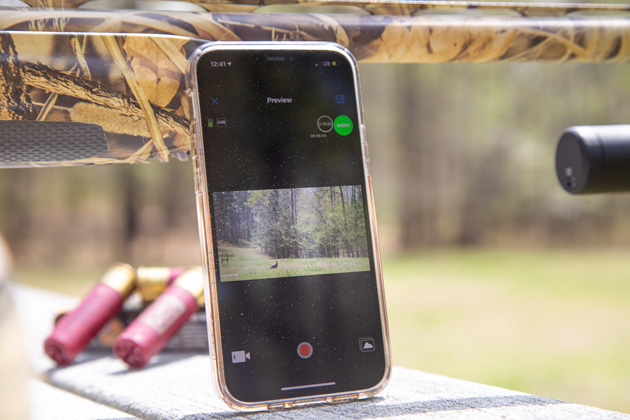 One of my favorite features is the simplicity of the Tactacam. Often times, with a new gadget, I have to spend more time than I would like reading instructions and even watching “how-to” videos online, but with Tactacam’s 5.0 camera, set up was seamless and self-explanatory. After an initial charge, simply download the Tactacam app on your phone, insert the micro SD card, power on, press the Wi-Fi button and connect to the Tactacam network in your phone’s Wi-Fi settings. That is it.

If you’re purchasing just the 5.0 camera, as I received, you will need to also purchase a micro SD card to begin filming as well as a mount if you want to rig it to your shotgun or bow. Tactacam has an array of products, mounting accessories, and packages to outfit your new Tactacam, including a turkey package.

Once your phone is synched with the camera via the Tactacam app, all that’s left to do is go hunting and push a button!

I think Tactacam was smart in allowing both live-view filming and filming without your phone at all, as both compliment the various instances that transpire in the turkey woods. For instance, if you’re leaned up against a tree working an indecisive gobbler in from 70-plus yards, you really don’t have time to fiddle with your phone, unless you’re one of those profound multitaskers. In one of these instances, simply press the record button on the camera itself. That way, when it’s time to put the bead on the turkey, the Tactacam 5.0 is ready film everything you are sighting. You’ll know it’s filming when the light on the power button pulsates.

The live-view feature comes in handy when there’s a little less pressure. Simply prop your phone up against a tree or wherever, hit record, and then you can view your camera from your phone, allowing you to adjust the the zoom and frames per second as you see fit. 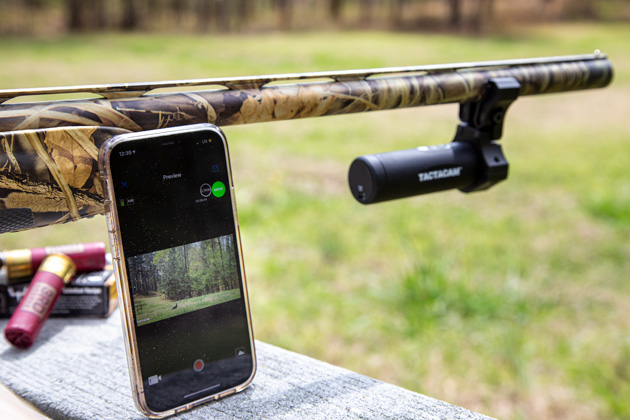 Another great aspect of the camera, is the various and customizable filming modes it allows you to record in, all of which are indicated by the light color on the mode button: The green mode (4k 30fps) is the standard mode and great for all-around filming, the dark blue mode is the zoom mode and the light blue mode is meant for slow motion. To customize resolution with your zoom preferences, simply zoom to your desired distance, and then in the settings, select you filming resolution.

Another great feature I think is worth mentioning is how stable the videos are, despite the recoil from firing. Tactacam touts new Image Stabilization Technology in the 5.0 camera, and they deliver.

In short, if you’ve been undecided about taking a camera into the woods or are not sure where to begin, I’d recommend starting with Tactacam’s 5.0. Its straightforward design coupled with ease-of use in the woods, as well as the ability to share and edit videos makes this camera a great go-to for the novice and veteran hunter alike.