With a brilliant moon illuminating thick fog below, the nighttime Florida landscape resembled something from an eerie Hollywood set, and I wondered what lurked beyond the vast pastures and dark cypress heads in the distance.

Only the first gobble, barely audible through the heavy air, snapped me from that dream and reminded me why I’d traveled to the land of the Osceola.

I’d joined several other writers for a late- March hunt with Savage and Mossy Oak at Okeechobee Outfitters near Lorida, Florida. Our hosts said the local turkeys had been challenging lately, but bird numbers were good. So after patterning several Savage Renegauge shotguns the first evening, we planned our initial hunts and tried to grab some sleep. Flydown — and hopefully, dark-winged gobblers — would come early.

Motte Meltdown
The first morning, my guide, Mike, and I set up in a blind overlooking a large pasture several breeding flocks had frequented lately. We heard some distant gobbles early, but as the sun burned brighter and our pop-up turned into a sweltering prison, Mike and I abandoned patience for action.

Most of the early gobbling had centered near a small nearby oak motte (a grove or clump of trees) bisected by a fence between two pastures, so we headed there. Easing slowly through the dark timber and glassing ahead for turkeys, we soon spied three hens feeding near the woods line. Then, a gobble erupted from across the pasture.

Mike and I backed away and circled through the thick, mucky woods to find a better vantage. Then we eased toward the opening and slipped within 50 or 60 steps from the closest hen. By then, two gobblers — one across the pasture and another closer — had sounded off several times, so we knew we were in the game.

As we prepared to sit, I looked up in surprise as a longbeard topped the hill and walked slowly toward us. If we remained still, the bird would likely waltz toward the hens and offer an easy shot. Mike and I called softly to offer encouragement, and one of the hens replied. But as often happens, something went sideways, and the gobbler turned and rubbernecked over the hill. As I shrugged my shoulders at Mike, I noticed movement to our left about 100 yards atop the pasture ridge.

“Strutter,” I whispered. “Coming our way.”

An ear-splitting gobble confirmed the bird’s arrival, and soon, he stood over several hens about 75 yards in front of us. Slowly, the group seemed to reverse course and started walking toward the point of woods near the fence, where we’d entered earlier. Without talking, Mike and I used the thick timber as cover to stay with them. Unfortunately, the turkeys were winning the race.

After several tense minutes of slipping and stooping through the jungle-like foliage, we reached an open gap where any further movement would blow the hunt. The gobbler was still tantalizingly out of range, but the hens had cut closer toward the woods to our right, probably looking to cross through a gap in the fence to the adjacent pasture. Silently, I hoped the gobbler would follow and offer a shot. 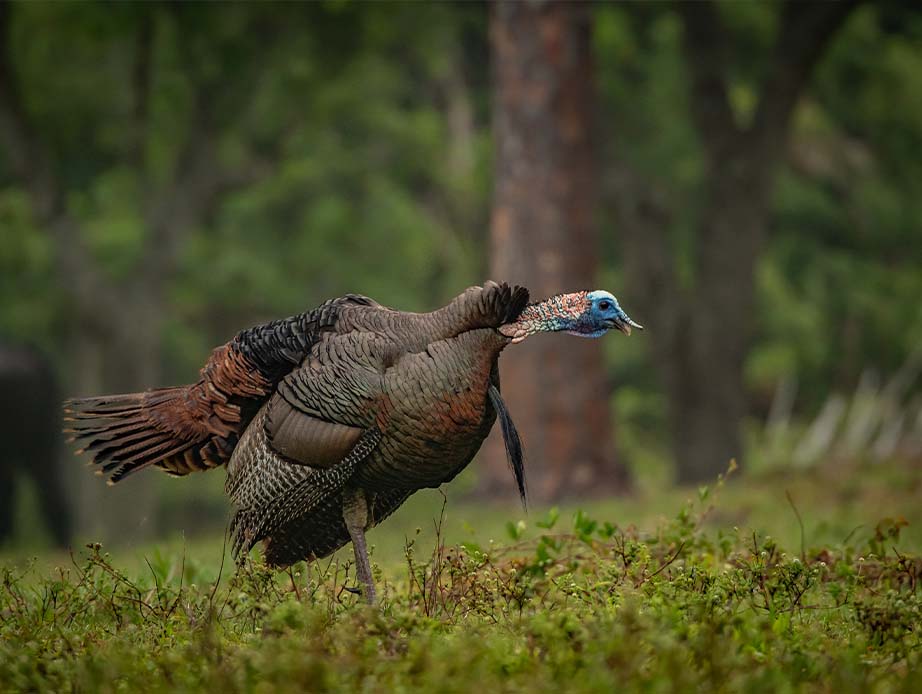 As the final hen disappeared from our sight, the longbeard dropped out of strut and craned his neck. Then, he made his move, walking with a deliberate pace toward the ladies and easing closer to us. Finally, at the last possible spot for a shot, he paused briefly and periscoped his head. The Renegauge roared, and our first Florida gobbler flopped in the wet grass.

The hunt had involved far more woodsmanship than yelping, but it was thrilling nonetheless. And when Mike and I admired the gobbler’s razor hooks and black wings, it seemed even sweeter.

Again, But Smarter
The second day, Mike and I returned to the pasture oak motte but with a different plan. There had been at least two other gobblers in that area, and it seemed reasonable that they might again follow hens toward the fence and into the other field. So, we found a decent listening spot near where we’d killed the bird the previous day and waited for action.

A bird gobbled sparingly in another woodlot, but after flydown, it was apparent he’d come toward us. Like the previous day, Mike and I crept quietly through the dense woods, peeking ahead to search for turkeys. We quickly spotted some and realized they were bearing down on us, so we reversed course and moved back near our original setup, hoping to intercept them.

With no good trees available, I knelt amongst palmettos in the black muck. Mike placed a makeshift blind around our position, and we’d barely settled in when the first turkey appeared. Within minutes, three hens and a strutter walked to a high point in the pasture and then stayed there for what seemed like eternity, with the longbeard strutting, drumming and gobbling intermittently. But unlike the previous day, the hens seemed to be in a hurry, and one by one, they left the gobbler and walked toward the fence gap near our setup.

As the closest hen pecked and purred several yards to my right, the gobbler broke, walking slowly yet steadily down the slope toward the ladies. He was already in range, but each step brought him closer to sure-kill territory. And when he stopped at about 30 steps to survey the scene, the Renegauge barked again, and Osceola No. 2 was down.

Mike and I halfsprinted to the turkey, thrilled by our good fortune. We laughed as I wondered aloud why we’d sneaked through the woods toward the birds only to end up where we’d started. But it didn’t matter, as the hunt had played out perfectly, with another sharp-spurred longbeard as our reward.

When departure time arrived, I took one final glance back at the Kissimmee River swamps and tried to set the scene into memory. Spring was just beginning, but I had a feeling I’d want to hold on to a special moment in the wild vistas of southern Florida.

Keeping Tabs on Florida Turkeys
A new Florida initiative is providing hunters with a better idea about the relative abundance of birds throughout the state.

In 2020, Florida Wildlife Commission biologists began estimating the distribution of turkeys by assessing habitat suitability and then incorporating information from that year’s summer turkey survey.

That resulted in a mapping model that estimated the abundance of turkeys across Florida, based on the relationship between the number of adult turkeys reported and the habitat quality where people observed the birds. You can view the map at: https://myfwc.com/hunting/turkey/map/

Florida had also done distribution assessments in 2001 and 2011, but this was the first that incorporated the habitat suitability model and summer turkey survey data.
Biologists used a habitat suitability model developed for Virginia but adapted for Florida. It assesses habitat quality based on the location, amount and arrangement of habitat types throughout a Florida turkey’s average home range.

The 2020 summer survey compiled turkey sightings reported from June 1 through Aug. 31. The annual survey provides valuable insights about the distribution, abundance and reproduction of turkeys in the state.

The Florida Fish and Wildlife Conservation Commission, the Florida Forest Service and the Florida State Chapter of the NWTF add their resources with grant funding contributed by the Fish and Wildlife Foundation of Florida. This, along with portions of turkey hunting permit fees, helps to expand acreage and improve on public lands.