Gould's Turkeys in the Land of the Jaguar

It wasn't one of those epic storms that blacken the sky, but for a few miles, it made traversing the bumpy, dirt road challenging.

As the elevation began to increase, the skies cleared, and I had to stop for a traffic jam of sorts.

A band of white-nosed coatimundis crossed the road in the crease of a sharp curve. They disappeared into the brush before I could grab my camera but allowed me to stop long enough to realize I had entered a different world.

These raccoon cousins are part of a unique ecosystem: the "Sky Islands," isolated mountain ranges that rise as far as 9,000 feet out of the desert. And while I was excited to see the surrounding cliffs and the cute coatimundis, my mission was to photograph a Gould's wild turkey. 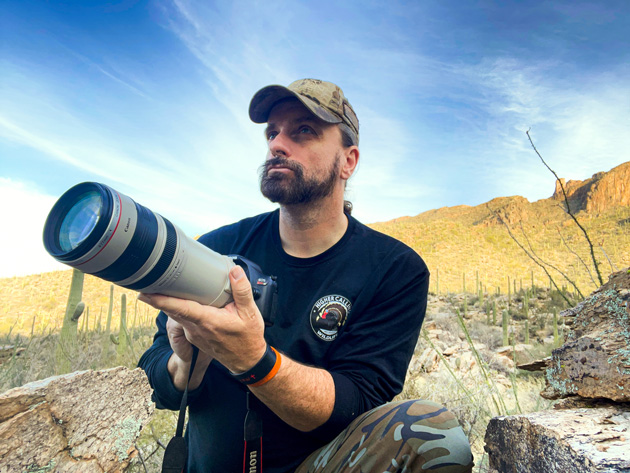 (The author, a lifelong hunter, is a wildlife journalist by trade and began a five-year-long quest to raise awareness to wild turkey conservation using photojournalism. He said the quest for the Gould's turkey was the one he was most excited to pursue. Photo: Chester Moore.)

The Gould's is the most mysterious of the five American turkey subspecies.

Discovered in 1856 by English ornithologist John Gould, these birds are seen by few hunters as they live primarily in Mexico but extend their range into the Sky Island's region of Arizona and New Mexico.

Gould's are the largest turkeys with longer legs, bigger feet and larger tail feathers than other subspecies. They have lots of white on their tail feathers, even more than the Merriam's wild turkey found in other parts of Arizona.

Once common in the region, market hunting wiped them out by the early 1900s, but cooperation between the NWTF, Arizona Game and Fish Department and Mexican wildlife officials has seen successful translocations and a small but viable population in the Sky Islands area.

Each year hunters draw for limited tags, and special enhancement tags (sometimes referred to as Governor’s tags) are auctioned off at the NWTF's annual national convention and by the New Mexico State Chapter, raising thousands of dollars for their conservation.

I was on a mission to raise awareness of their existence.

In 2019, I began a five-year quest to raise awareness of wild turkey conservation. I believe as turkeys go, so do America's forest and crucial wildlands. And by using photojournalism to share images of turkeys from the wild, I hoped to show everyone from hunters to inner-city school children the value and rugged beauty of wild turkeys.

The first year involved photographing the Grand Slam, which took me to New York for Easterns, Florida for Osceolas, my native Texas for the Rio Grande and Colorado for the Merriam's.

Year two involved a challenging search for Eastern turkeys in East Texas, an area where the NWTF actively restores the birds with the Texas Parks and Wildlife Department.

But the search for the Gould's turkey would be the big one. Getting the other birds had its challenges, but all of them are abundant. The Gould's turkey not only lives in isolated areas of America but is in small numbers in super-rugged terrain. 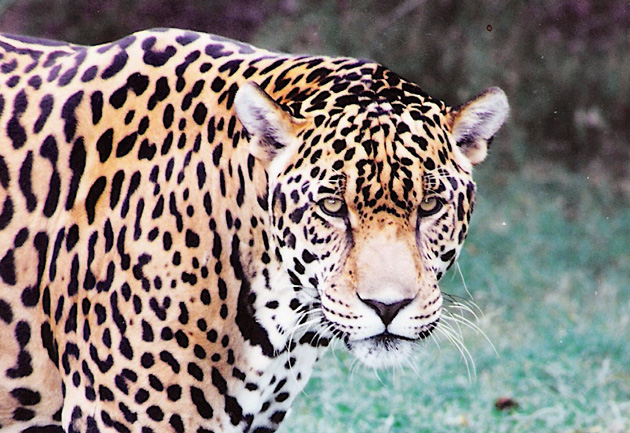 (The native range of the jaguar includes the American Southwest. Recent trail camera photos show a male has been prowling the Chiricahua Mountains area in 2021. Photo: Chester Moore.)

Since the mid-1990s, small numbers of jaguars have crossed into Arizona and New Mexico from south of the border. Known as a cat of tropical forests, jaguars thrive in high desert when prey is abundant, and poachers are absent.

On Jan. 6, 2021, a male jaguar showed up on trail camera photos set out by researchers in the Chiricahua Mountains. According to AZGFD officials, the gorgeous cat has been captured on trail cameras on 45 occasions since November 2016.

While covering that story, several researchers mentioned Gould's turkeys’ presence in the area during our conversations. The coatis and jaguars discussed above, and the endangered ocelot’s presence showed I needed to document this unique ecosystem and its inhabitants. It was time to head to Arizona and seek out Gould's turkeys in the land of the jaguar.

Back on the Road

Flying into Tuscon, I based out of Wilcox and allotted myself three days for the search. Talks with biologists, landowners, hunters and NWTF officials in both Arizona and adjoining New Mexico areas gave me options on where to search.

A small creek that any turkey hunter would consider prime habitat cut through a canyon. Being mindful of rattlesnakes, I carefully probed the area and found no sign of turkeys.

On the hike back to the truck, however, I got a special treat.

A beautiful Coue's deer buck browsed along the creek. This small subspecies of whitetail always has intrigued me since reading a story about them in Sports Afield as a kid. Called "grey ghost" for their pelage and elusive nature, this buck seemed to know hunting season was over and obliged me with a photo opportunity.

That buck and a handful of does I later saw were a nice consolation prize, so I moved on with the focus on turkeys.

(The author photographed this beautiful Gould's turkey gobbler in a pristine setting in southeastern Arizona on the outer edge of the Chiricahua National Monument. According to National Park Service officials "Chiricahua" is an Opata word meaning "wild turkey" as the mountain range was known for its turkeys at the time Jesuit Juan Nentvig recorded this translation during his time in the region between 1750 and 1767. Photo: Chester Moore.)

I was concerned three days might not be enough after covering lots of ground and speaking with locals who had not seen birds in a while.

And just as I pondered this and came to the outer edge of the stunning Chiricahua National Monument, I spotted a gobbler.

The long-bearded, tall bird fed along a draw and did not spook when I pulled over. I kept my distance and allowed the 400 mm lens to close the gap.

I found two more birds in another location, but this was the one I was looking for, a truly beautiful gobbler any hunter would be proud to take, and this hunter/photographer could not have been happier.

From a photographer's perspective, this completed my Royal Slam and gave me something to show the world about Gould's turkeys.

Because of caring conservationists, these magnificent birds exist in an area where they were once eliminated. By the grace of God, my third year of this quest was met with success.

Sure, I would like to have seen a jaguar too, but so would every other researcher and photographer that sets foot in southern Arizona.

Getting images of a Gould's turkey was a dream come true.

And the experience taught me the Sky Islands are an area of significant ecological importance for many unique creatures that dwell in this remote, overlooked corner of the beautiful Southwest desert.