Last year we posted some ghoulish gobblers on our social pages to wish you all a happy Halloween. However, the picture invoked some scary recollections for many of you hunters and turkey enthusiasts, including zombie gobblers coming back to life, phantom gobblers and many failed hunts. Here is a list of some of our favorite comments. 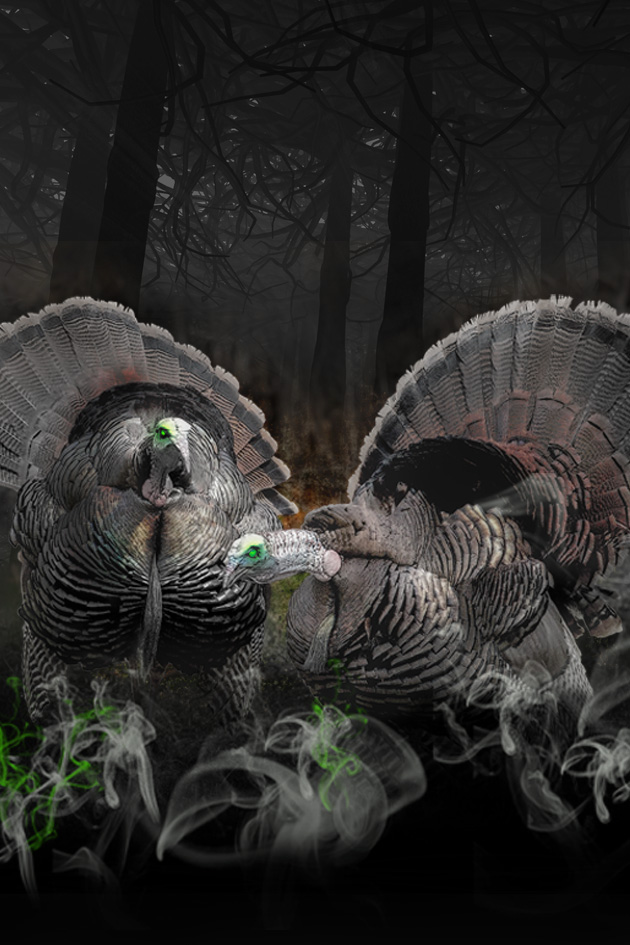 “Shot one that flopped a bit then died. He laid there dead for 10 minutes. I finally gathered my stuff and got out of the blind. Walked up to him, all piled up and said to myself, wow those are some nice spurs. At the sound of my voice, he raised his evil head, jumped to his feet and walked a circle all the way around me about four feet away, looking sideways at me giving me the evil eye like he was ready to pounce on me. Scared the bejeezus out of me. I think I might have yelled at him, something like “Leave me alone” or “don’t even think about it!” or something really meaningless to him. After he circled me, back to where he started from, he trotted down the hill into the briars. I was so shocked I could barely get my gun shouldered to get a shot. He was so close that I missed. Never found him, Zombie bird. The Walking Dead.” –– @russellcreekoutfitters

“3 years in a row, opening morning of spring gobbler I get a gobbler coming to me from another property to the southwest, each time he gobbles he is closer and closer then I hear a shot go off just before the property boundary” –– @lauvercorey

“I had one I called "The Phantom" hunted him for 5 years! Never was able to kill him. One minute he was there, the next he was gone.” –– Ritchie Arnold

“One afternoon I struck a big, bad turkey that came through a thicket, across a creek, through a field, and across a fence to 13 yards only to have my gun snap. Still haunts me.” –– Wild Turkey Report

“The one I missed at 5 steps in Nebraska with Bird Jensen. Nightmarish...” ––  Jeff May

“There is an old Tom that haunts a hollow on round top Mtn. At first light he gobbles to lure you in to his valley. Once he knows your there , the silence becomes deafening. Maybe he shows his face in the distance, maybe you’ll hear him drumming. You rarely get more than a glimpse of him before he heads off into the Mtn laurel, only to gobble again. Is he circling or is he gone. He will be about 5 if he still lives. We’ll enter his lair again this spring, drawn in by the echo of the phantoms gobble” ––  Marty DiMasi

“Shot one this year at 45yds. Knocked him down, ran to him, chocked him out, took him back to my stuff only for him to wake up a few mins later as I was packing up. He ran off and couldn’t get the gun off my back fast enough to kill him for sure. Only bird to ever play dead on me and to run away” –– Daniel Welch

“Every one ive ever bumped, missed or scared off.... lol each one is a nightmare” –– Lawton A. Mattson