Turkey hunters long for the bright, warm days of spring. But when the mercury continues to rise and the landscape gets hot, they might regret those thoughts.

Warm conditions make turkey hunting tough. Science backs that up, as a 2016 study by Dave Godwin, turkey project leader for Mississippi Wildlife, Fisheries and Parks, and Derek Colbert, then a graduate student at the University of Georgia, indicated turkeys gobbled most when the average daily temperature was 60 to 69 degrees. As temperatures increased, gobbling decreased. That affirms what veteran hunters already know: Nothing shuts down gobbling turkeys like hot weather.

But as with any difficult circumstance, heat doesn’t make turkey hunting pointless. In fact, by switching strategies, you can often turn it to your advantage. 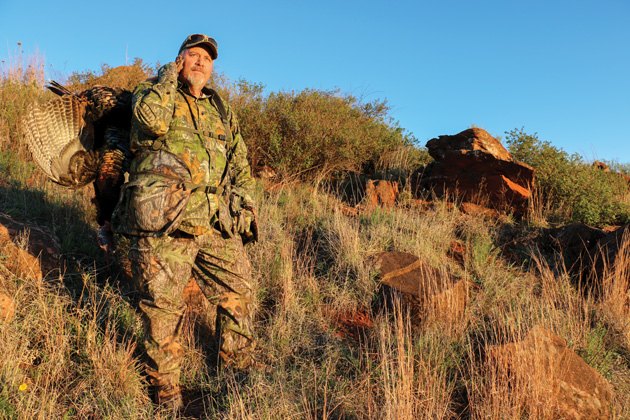 To understand how turkeys react to warm weather, don a winter coat during a hot summer day. You’ll immediately be uncomfortable, and exerting any effort makes matters worse. And if you’re wearing a dark coat in bright sunlight, you might feel as though you’re baking. That general concept holds true with turkeys and their dark, thick plumage. But unlike you, who can shed that coat in favor of shorts, turkeys are stuck with their heavy outerwear. As such, their activity and exertion levels decrease as temperatures warm. It’s not uncommon to see turkeys panting or spreading their wings to lose excess heat when they’re active during hot weather.

That behavior has obvious effects on hunting. Birds might not talk much after flydown. And even if gobblers are fired up to breed, they sometimes won’t travel long distances to find hens. When hot weather coincides with other environmental factors — wind or low barometric pressure, for example — hunting can really get tough.

Common sense might dictate that hunters merely adopt a more patient approach, setting up at likely areas and waiting for turkeys to arrive. That’s good advice, but hot, sunny conditions can prompt birds to switch locations. They often eschew fields, pastures, meadows, food plots and sun-drenched open woods and prefer to loaf at cool, shady areas, such as creek bottoms, evergreen stands or other relatively dark spots. And if they’re not talking — a likely scenario when the mercury rises — locating birds can be difficult. 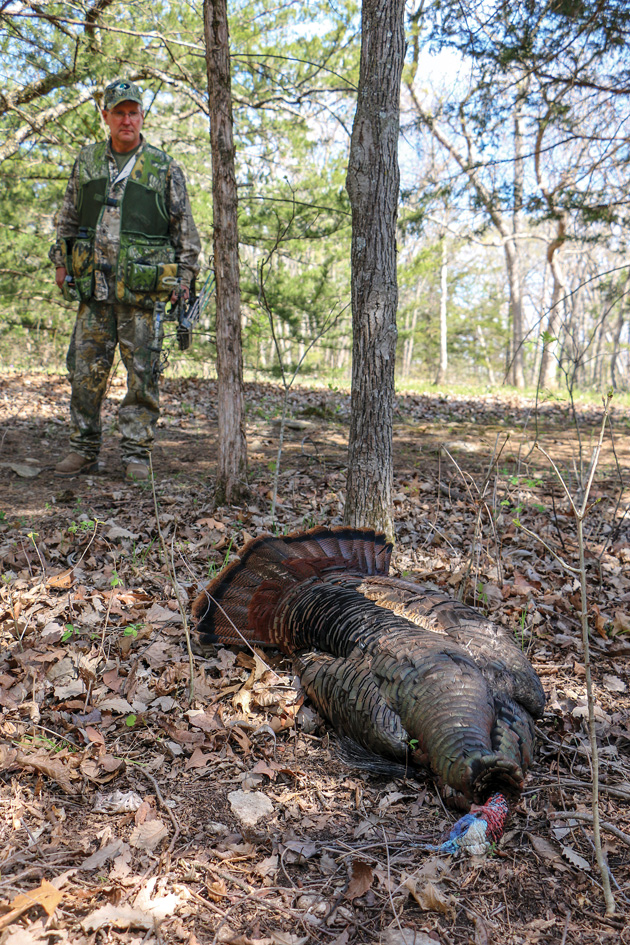 HOW TO ADAPT AND ADJUST

During hot spells, early mornings and late evenings become prime hunting hours, as birds might limit much of their activity to these periods. Be in position to take advantage.

Try to roost birds aggressively during late evening. Don’t be satisfied by finding a gobbler on a hardwood ridge. Use cover and terrain to slip as close as possible, trying to identify the patch of trees — or even the individual tree — where he’s roosted. Then, quickly formulate an approach plan for the next morning, arrive ultra-early and be underneath him as he wakes up. With luck, he might fly down into your lap. If nothing else, you’ll probably be in good position to entice him close for a look after flydown. Don’t try to rush the hunt. Simply be in the best position possible for a lightning-quick encounter during prime time.

If gobbling wanes or ceases as temperatures increase, switch gears. Scouting should have revealed shady loafing spots nearby. Sneak into one of these areas, find a comfortable setup and resolve to spend a few hours there. Turkeys sometimes slip in and out of such spots several times during the day, so you must be patient. If you’re fidgety, a blind will help. Call regularly but sparingly during your sit, as you’re hunting a destination area. Turkeys likely want to be there anyway, and your soft yelping, clucking and purring will only reassure them that company waits.

In some scenarios — especially out West or in Texas — you don’t have to sit. Shade might be at a premium in those regions, so turkeys often congregate in easily identifiable spots such as cedar groves, live-oak patches or even mesquite flats. Walk or drive to likely areas, and call to strike turkeys. If birds gobble, you’ll want to slip closer before working them, as they might not travel far to investigate yelping. This tactic — sometimes called “groving” in cedar-grove-rich areas of Nebraska and South Dakota — can be productive if you have an intimate knowledge of the terrain.

If morning and midday efforts fail, refocus your energy on the 90 minutes to an hour before flyup, when birds might become more active and grab a bite before heading to roost. Identify likely roost areas, and set up to intercept turkeys returning to that timber in late afternoon. Gobbling during that time can be surprisingly good. And when you make a longbeard gobble during the afternoon, your odds of killing him are pretty high.

One more note: In relatively arid areas — think Texas, western Oklahoma or the Southwest — turkeys often visit water holes, stock tanks or other wet areas during hot days. Setting up near these spots can put gobblers in your lap, but you must be well concealed, extremely patient and, above all, cool enough to sit for a few hours. 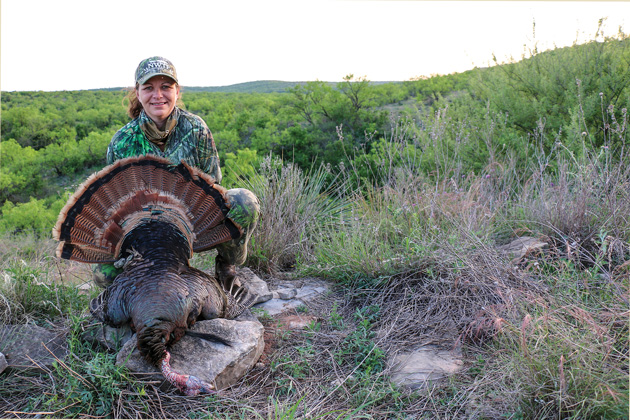 I encountered the hot-weather conundrum during my first hunt of spring 2018. I’d joined friends from Remington at the Chaparossa Ranch near La Pryor, Texas, and the weatherman called for midday highs near 90. After an early-morning miss on a strutting Rio, my optimism dimmed.

But the day wasn’t done. The outfitter guided the truck into a nearby pasture and showed me a winding trail that led through some pretty live oaks to two large water holes. Turkeys frequented the shady area at midmorning, he said, so he suggested I slip toward the water and attempt to strike a gobbler.

My first calls netted only silence, so I crept slowly along the trail, glassing ahead to be safe. Finally, figuring I was nearing the water, I found a nifty bend in the road and set up to call for a bit.

Soft yelps and clucks on a slate were met with silence, so I pulled out an aluminum call, hoping its louder, high-pitched sounds would cut through the wind. A gobble interrupted my first series, and two more quickly followed. The birds were about 120 yards away, on the other side of the nearest water hole.

I continued calling, and the turkeys gobbled at about every other series, moving steadily left to right. Then, after about five minutes, they went quiet. Figuring they had probably reached the road and were likely approaching, I set down the pot and readied my gun. Moments later, two shimmering-black Rio longbeards popped into view, and the lead bird raised his head. I centered the red-dot above his wattles and ended the hunt.

The sun burned hot on my pale neck as I trudged toward the main road. Midwestern hardwoods would probably have been more comfortable, but the sweltering Texas pasture and heft of the heavy Rio suited me just fine that day.