How to Host a Wild Game Dinner

Have you ever invited a friend or relative over for venison, wild turkey, gator or any other animal you harvested, only to have them reject it with their nose turned up like you asked them to support dog fighting?

Unfortunately, many have been conditioned to only eat meat that comes served on a Styrofoam plate with safe handling instructions on it, and the idea of eating something that wasn’t harvested in a human-controlled setting is repugnant.

I honestly feel bad for these people because they are missing out on something I would consider undeniably and wildly (no pun intended) delicious. They also are missing out on a nutritious, clean and ethically harvested meal, too. But we all know this.

So, how would you serve a wild game dinner to open someone eyes to the exquisite side of game meat?

There are many ways to host a wild game dinner, whether you’re trying to introduce a nonhunter to hunting, trying to show off your cooking skills, just acquainting someone with something tasty or all of the above. 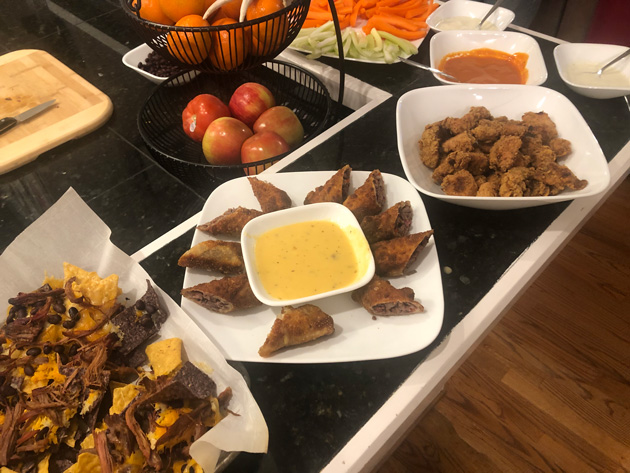 While it might be funny to tell your children, “Eat this chicken,” and then two days later let them know it was squirrel, it probably isn’t the best idea to do that to an adult; you could put a bad taste in their mouth (again, no pun intended).

Definitely let your guest(s) know exactly what you are serving. Let them know the story of how you hunted the animal, too — was it cold, was it foggy, did you have to wait hours before you could take a shot or did you see an unbelievable sunrise or sunset? Telling the story of how you collected the food can really involve your guest with the meal you are about to serve.

If we are being honest, wild game is, generally, more difficult to cook than its farm-raised counterparts, so it is important to take the proper measures to prepare the food in a way where you are not overcooking the meat. A rubbery, fishy piece of duck will probably not set a good first impression. Most hunters know this, but there are countless ways to make sure your harvest is delicious for first-timers — brining, gentle searing or cooking low and slow. If you’re unsure of how to prepare your game properly, a quick google search will overwhelm you with suggestions. 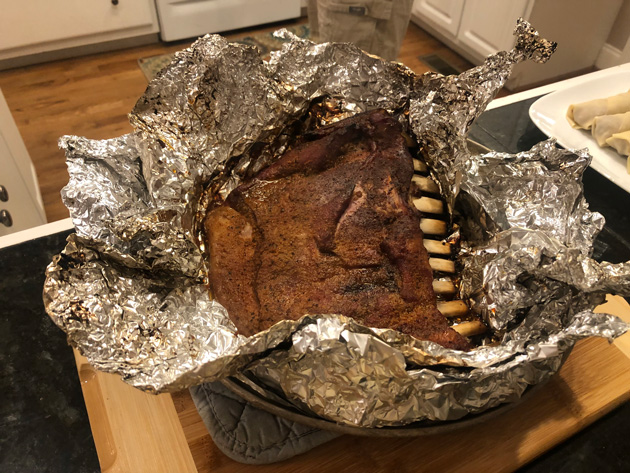 If you have finally coaxed someone to coming over for a wild game feast, it might not be the best idea to serve rocky mountain oysters, especially if they were already on the fence about trying wild game.

Venison burgers or steaks, fried turkey breast or BBQ wild pig ribs are all good options to offer the disparager. Foods like these are considered comfort foods, so that association of comfort has the ability to be a good introduction.

While I am not a picky eater in the least, and since I actually prefer most of my meat to be wildly caught or harvested for ethical and sustainable reasons, there is no need to coax me to come over for a game dinner.

However, a friend and coworker of mine and I discussed the idea of how to introduce the naysayers, and we talked about menu ideas and ways to introduce people unfamiliar to wild game. Before we knew it, it was planned, and Pete Muller, NWTF public relations manager and unofficial wild game chef, invited members of the NWTF Communications Department over for one of his well-known wild game dinners. 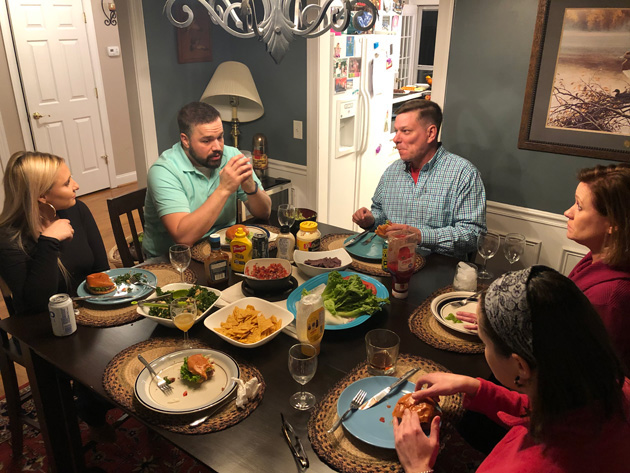 Muller isn’t new to serving game dinners, though. He usually hosts them a few times each year, introducing hunters to new ways to cook their harvest and introducing first-timers to game meat.

"While these dinners really require a fair amount of prep ahead of time, part of the fun for me is cooking up the dishes in front of people, said Muller. “They'll ask questions about where I learned the recipe, what seasonings I am using or even how hard the dish is to make as they take in the sights and smells of the foods. Also, I tend to go through a lot of tasting spoons as I think that adds to the experience by letting people try things along the way."

Using the above tips, Muller put together a menu filled with delicious wild game iterations of common comfort foods:

Venison sliders (with choice of toppings)

The appetizers, to me, were the most impressive part of the meal. Chef Muller really outdid himself.

The pulled wild boar shoulder was seasoned and smoked for hours on a Traeger Grill over low heat until it exceeded 200 degrees internally, allowing it to pull apart like fatty, farm-raised pork, shredded and tossed over nachos with a melted cheese blend and beans. 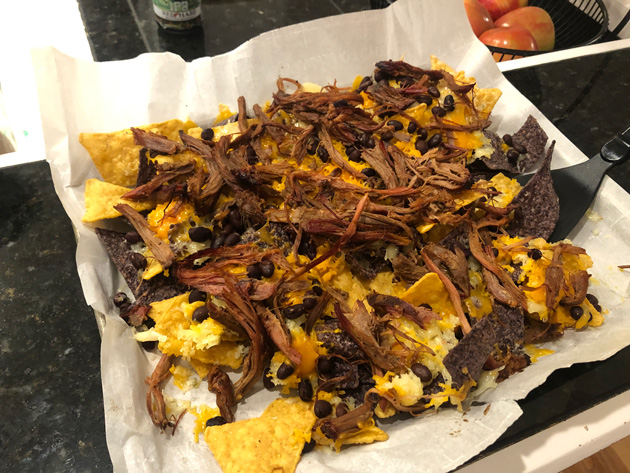 The boneless wild turkey “wings” were a wild turkey breast cubed, breaded with flour and various seasonings and fried to perfection, served with ranch, blue cheese and buffalo dips.

Some will tell you that you cannot have good ribs from wild pigs – “They’re too lean.” Nonsense! Like the shoulder, Muller smoked the wild pig ribs for several hours at a low temperature and then smothered them in BBQ sauce. 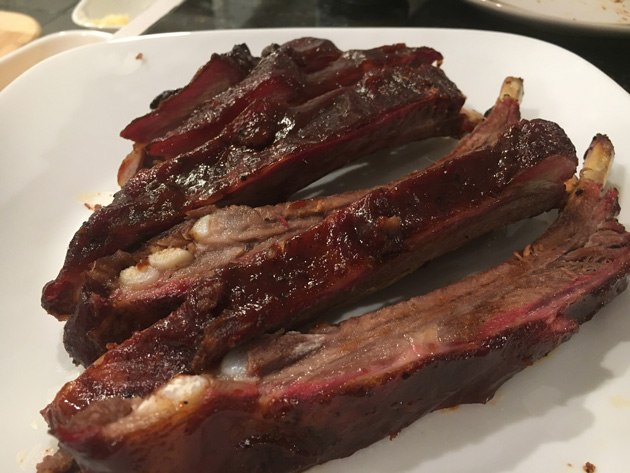 The eggrolls were stuffed with shredded venison tenderloin, red onion and peppers and served with a beer-cheese dip.

He also served nongame appetizers, including a mountain of serrano pepper guacamole and a homemade pico de gallo.

Dinner included grilled venison burgers, served as a traditional American burger with melted cheese, lettuce, sliced onion, tomato, ketchup and mustard. We were supposed to have hand-cut fries, but we were too busy having a good time and forgot about the sliced potatoes in the fryer outside (by the time we remembered, the potatoes were a bit well-done). 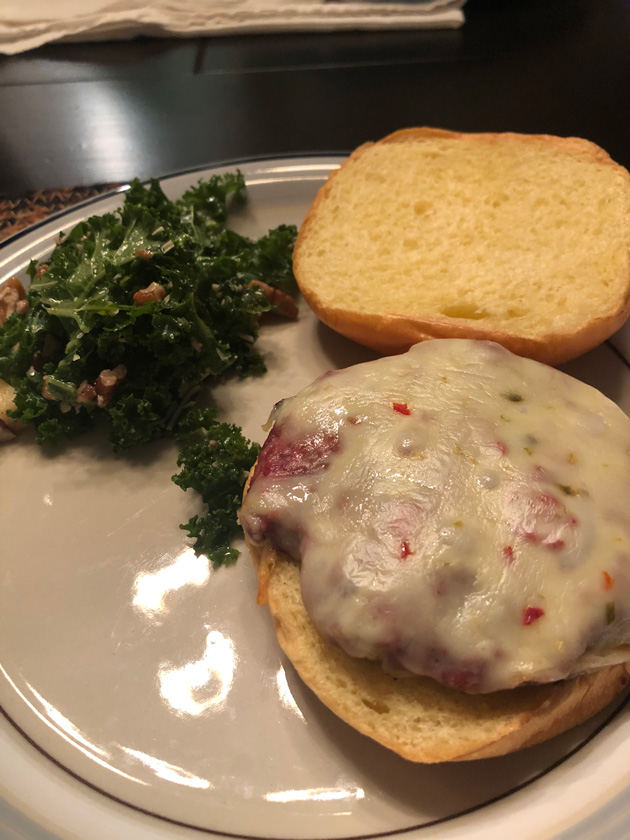 In my opinion, Muller’s dinner was a great example of how to host a wild game meal for people who may be skeptical about trying an organic food source.

So, the next time you’re planning on having company for dinner, take some of the above tips into consideration, especially for those skeptics; you never know, you could introduce someone to hunting just by cooking them a tasty meal.

Muller’s menu is just one of countless options. If there is a farm-raised version, then, nine times out of 10, there is more than likely a wild game version, so get creative and have fun — but not too much fun, or you’ll forget about the fries