Hunting the West: Wide Open, Up and Down

Turkeys behave differently in the wide-open or mountainous country of the West. Adapt your tactics to create a memorable road-trip adventure.

Folks from east of the Mississippi River often have the same reaction when taking their first Western turkey trip: They’re awed by mile after mile of open country and, in some cases, high mountains and deep valleys.

That’s part of the allure, of course, and it makes for great experiences. However, that unfamiliar terrain also poses some challenges, as big-country turkeys act differently than their Eastern cousins. And because turkey hunters are creatures of habit, they sometimes try to hunt Western birds like their hometown turkeys, which can create a tough learning curve.

Don’t fall into that trap. If you’re planning a Western longbeard safari, go prepared with the right gear and mindset to fill tags and create memories. 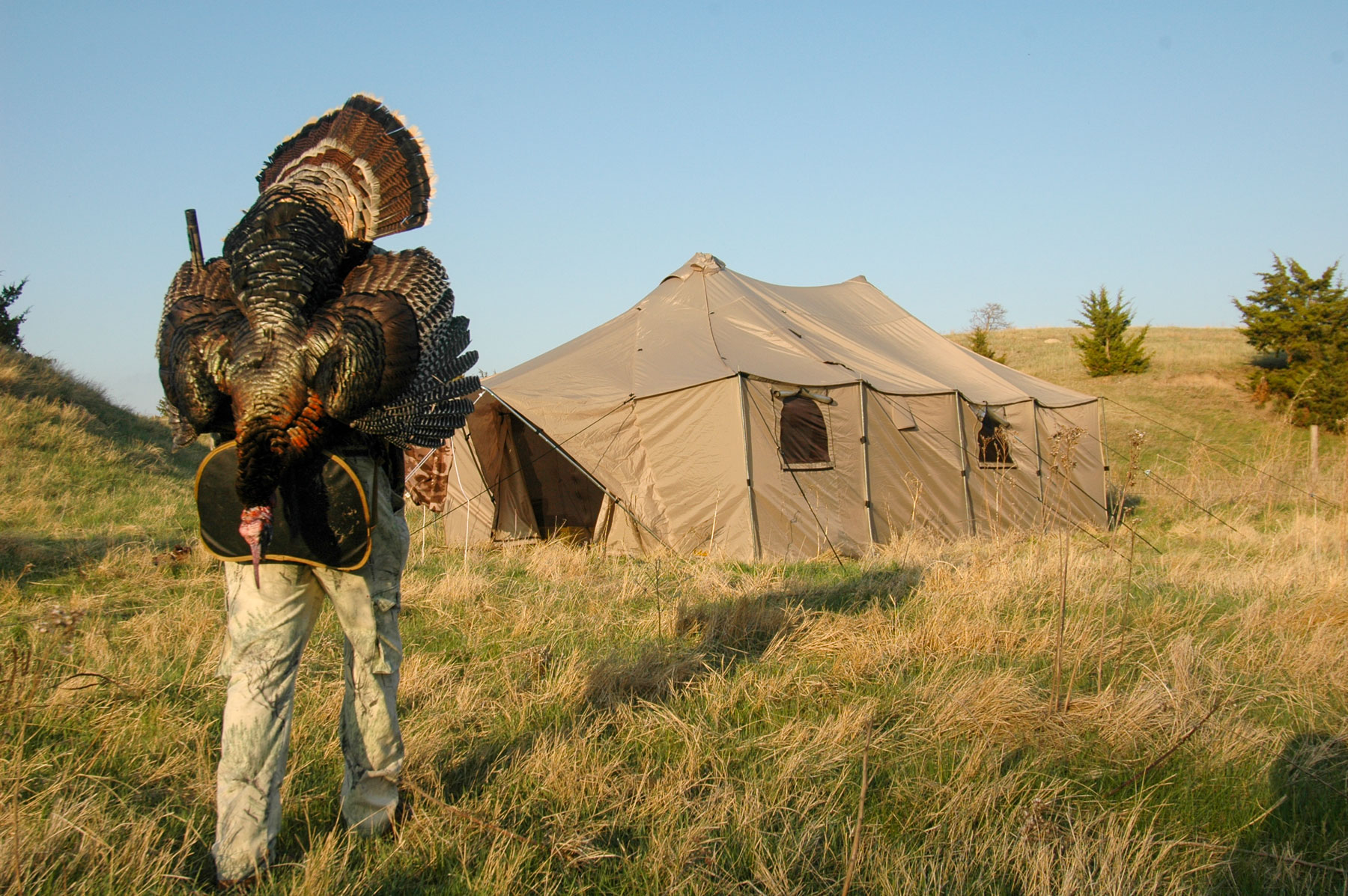 Western turkeys — Merriam’s, Rio Grandes and hybrids — don’t differ much physiologically from Eastern birds. But they’re creatures of the landscapes they inhabit, so their behavior and daily routines often seem foreign to east-of-the-Mississippi hunters.

Many Western regions are open and have few trees — especially large trees for roosting. Because roost sites are at a premium, turkeys in areas such as Nebraska, South Dakota and western Kansas often crowd suitable trees every night, creating large “traditional roosts” that can hold more than 100 turkeys. These roosts are often not near prime feeding or nesting areas, however, so birds typically fly down and hit the ground running. In some areas, they might cover several miles before returning to a roost at night. Those mobile turkeys might wander almost anywhere: river breaks, large pastures, river bottoms, creek drainages, huge agricultural fields or similar areas.

Western mountain birds also behave uniquely. Mountains typically have plenty of timber and roosting areas, which lets birds spread out. In fact, you usually won’t encounter turkeys everywhere in mountainous areas, but you’ll find pockets of birds throughout. And their location in terms of elevation varies with the season. Depending on winter severity, birds in many areas spend winter near lowland ranches where they can find food. Then, they shift to higher habitat as spring breaks.

“Merriam’s wild turkeys tend to travel up in elevation as the season progresses,” said Ed T. Gorman, small-game manager for Colorado Parks and Wildlife. “Often, they are found right below the receding snow line. Think about weather, too. If the spring season is delayed, look for birds to be slow in moving away from wintering sites.”

HOW-TO THROUGHOUT THE DAY: OPEN COUNTRY

Locating large “mother-ship” roosts isn’t difficult, whether during evening roosting sessions or when listening before dawn. Plot a common-sense fly-down hunt, but try to set up at funnels or likely paths where turkeys might travel after flying down. Remember, they’ll often disperse quickly across the landscape, and if you’re in the wrong spot, fly-down hunts near big roosts can be a waste of time. And if — usually when — birds slip past you and depart, be ready to get after them.

Western turkeys are often quite vocal, so you can usually keep track of flocks by using turkey or locator calls. However, just because birds respond doesn’t mean they’re coming to you, and falling in behind a group of roving turkeys is futile. You must get ahead of them or be where they want to travel.

Often, it’s best to use optics and get a visual on roaming turkeys. That lets you pinpoint their location and determine their travel route. Glass open areas thoroughly. Scan closer areas first and farther spots afterward. Look for anything out of place. It’s better to take a second look at a distant cedar than to assume it’s not a turkey and bump a bird. Hedge your bets by scanning likely travel routes, such as draws, fence lines, cottonwood bottoms, cedar groves and similar spots.

When you spot birds, reposition on them swiftly and aggressively. That might seem like stupid advice for wide-open country, but it’s critical. In fact, the biggest mistake Eastern turkey hunters make out West is not moving enough. Cover usually won’t hide all your movement, so you’ll have to use terrain to your advantage, which can require some long end-around maneuvers. Analyze the landscape, plan a hidden approach and execute it swiftly. Look for subtle features that might hide your approach, such as gulches, creeks, cedar patches on river breaks or even raised roadbeds. Then locate a setup along their travel path. If you miss the birds, locate them again, and form another plan.

When you can’t see birds, locate or keep tabs on them via calling, preferably with something loud and high-pitched to cut the wind, such as a box or aluminum call. Listen to gobbling to pinpoint birds, anticipate their approach or track their travels.

Walking and calling can work out West, but you must be extremely careful with your movements in open country. Often, it’s best to slip close to likely travel, feeding or loafing spots — creek bottoms, cottonwood flats, cedar groves or timber near large ag fields — and then set up and call. 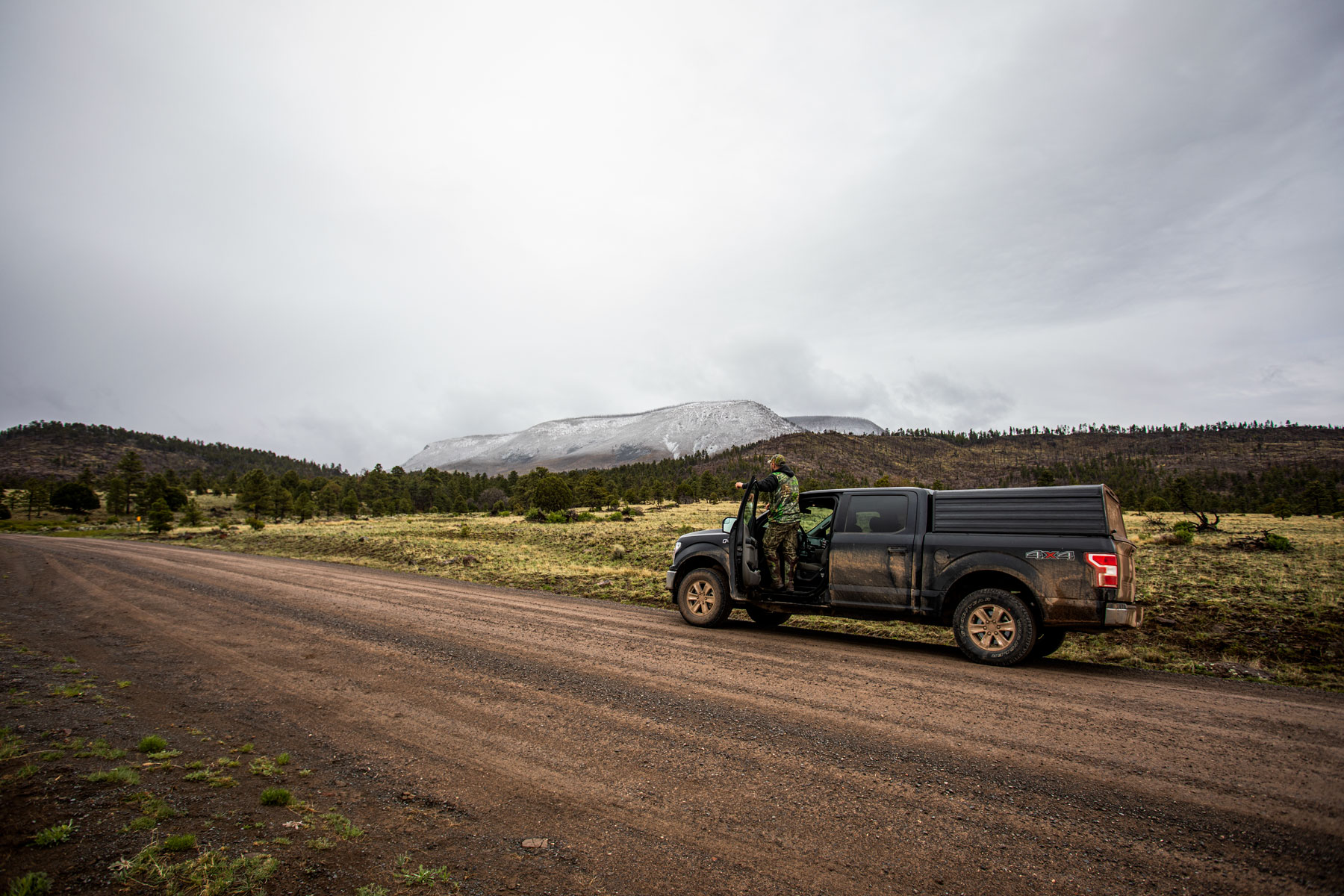 On the surface, pursuing Western mountain birds seems similar to chasing mountain-country Easterns like you might find in Pennsylvania, Georgia or West Virginia. But as mentioned, the location of Western birds might change rapidly as spring progresses.

Fly-down hunts in steep terrain can be productive. Try to roost birds and slip in tight just like you would at home. However, remember that the severity of the terrain might dictate where turkeys fly down. Often, in steep stuff, they’ll pitch to the short side of terrain. That is, a bird roosted on a 45-degree slope will likely pitch straight out toward the rising slope rather than sailing downhill.

Walking and calling can work well in mountains, as you’ll typically have abundant timber and terrain to hide your movements. Try to get at roughly the same level as turkeys before trying to work them. That might mean hoofing considerable distance to a bench, meadow or plateau above or below you. Also, remember that steep peaks and vast valleys can produce tricky acoustics. Course turkeys accurately before pursuing them.

Cold-calling at midday can also work, but likely setups in the Western mountains won’t look like the logging roads or food plots back home. Advice from some Western biologists can give you a start. Matt Meshriy, environmental scientist with the California Department of Fish and Wildlife’s Upland Game Program, said mountain hunters should look for turkeys near recently timbered areas or oaks with water nearby. Casey Cardinal, resident game-bird biologist with the New Mexico Department of Game and Fish, said hunters should seek open grassy bottoms, as turkeys tend to roost in pines toward the top of a hill and fly down into the bottoms at daybreak. Also, she suggested that hunters find food sources such as acorns, pinon nuts or juniper berries in the forest or new grass in canyon bottoms.

Wherever your Western travels take you — vast Dakota prairies or steep Colorado mountains — remember that the same basic principles of calling and woodsmanship that work on Easterns will help you tag Western birds. Rely on your optics, and be willing to reposition and put in some miles. When everything comes together, you’ll find that the strange-sounding gobble of a Rio or Merriam’s at close range is just as thrilling as hearing an Eastern hammer in hardwood timber.