Inside the Vest: Must-Have Spring Gear

Some hunters carry loads of equipment, but others go light. Here’s the scoop on what you truly need in your vest this spring.

The veteran hunters offered a study in contrast.

One, a longtime guide and champion caller, was a confirmed minimalist, carrying only his gun, three shells, a couple of diaphragm calls and perhaps a pot call in the woods. The other, a seasoned woodsman and turkey scribe, carried enough gear for a small garage sale. Each had enjoyed great success in the turkey woods, but the stark difference in their equipment approaches prompted an obvious question: How much gear should you carry while turkey hunting? 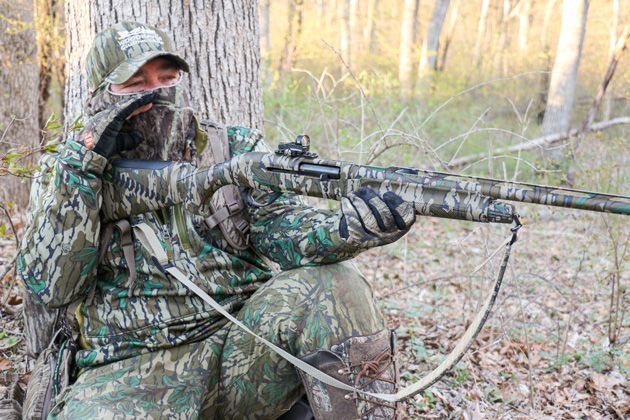 Here’s the bottom line: It depends, ultimately boiling down to your style, approach and circumstances. But if you’re seeking suggestions, here’s one hunter’s approach. 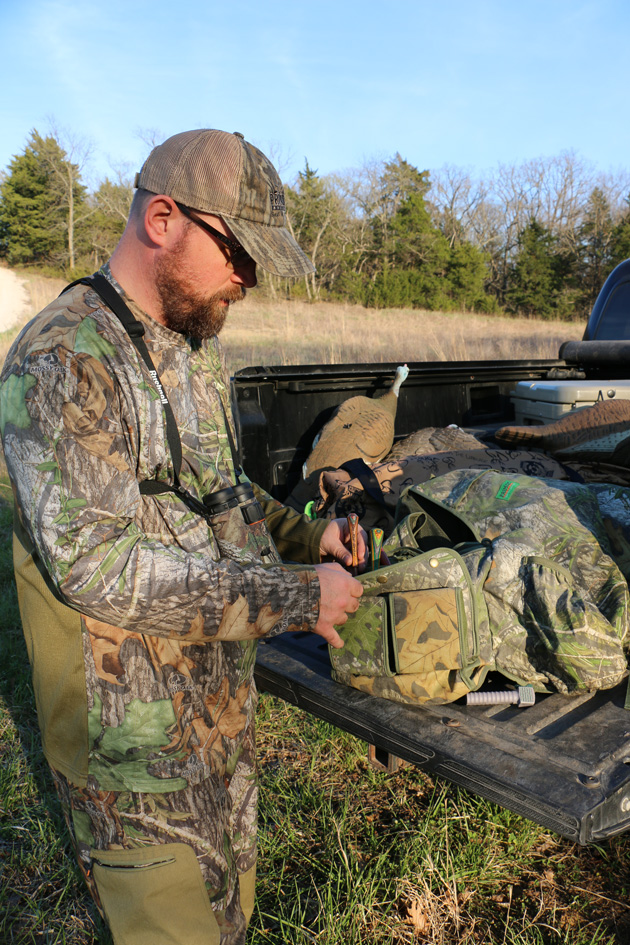 I strive to stay light and mobile in the woods, bringing only what I need to succeed and not getting weighed down by excess junk. However, I also believe in being prepared, so I might carry more gear than some hunters.

First, let’s cover the basics. Obviously, I tote a shotgun, along with more than enough shells for a day’s hunt. You should only need one shotshell, but I’ve experienced tough opportunities and situations that forced me to expend three or four rounds to dispatch a bird.

I organize the rest of my gear in a light vest with a detachable cushion. Because I want to present realistic and varied vocalizations while calling, I carry an array of instruments. Typically, that means three pots: one slate, an aluminum and a glass or crystal. I always have a box call, plus four or five diaphragms. Most days, I’ll also carry a tube, trumpet or wingbone around my neck. That might seem like a lot of yelpers, and honestly, I might only run one call some days. However, I might run them all during other outings, and I’ve always believed that slightly different sounds from various devices can be critical when trying to prompt responses from otherwise tight-lipped gobblers. 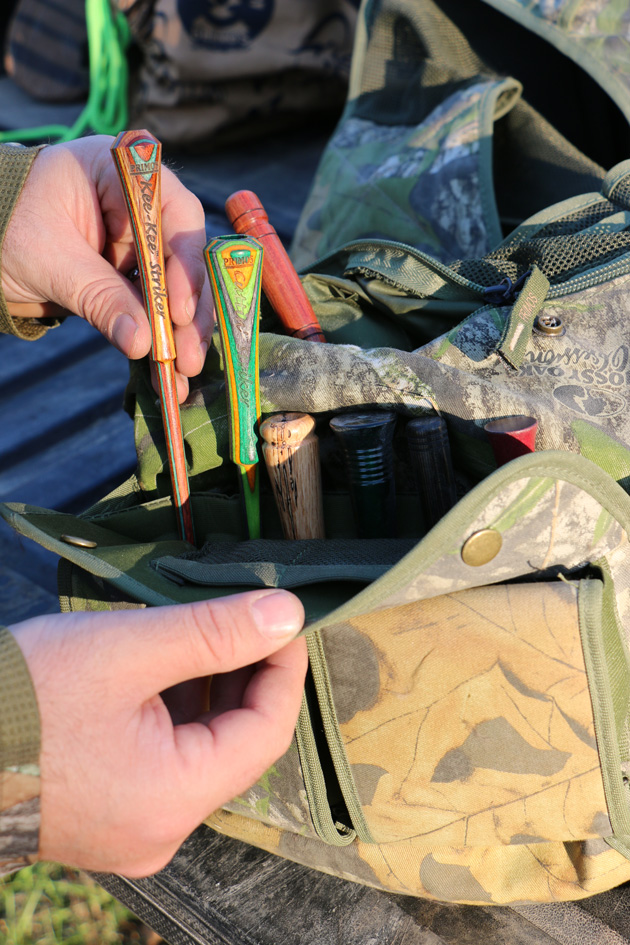 For locators, I stick with the basics: a crow call, an owl hooter and sometimes a coyote howler. Now and then, I might also carry a woodpecker call or hawk screamer.

I keep my facemask and gloves in my vest so they’re ready to wear at a moment’s notice. I’ll also stow extras of each in my truck in case the first set gets wet or lost.

Decoys can weigh you down in some scenarios, but they’re must-haves for fields or similar open country. When the situation calls for them, I usually tote two: an Avian-X jake and Avian-X feeder hen. They’re light and come with handy carry satchels, so hauling them through woods and over terrain isn’t too burdensome. Oh, and I also carry extra stakes, as I tend to lose those frequently.

Many days, the most important tool I carry hangs around my neck: binoculars. Good optics can be critical for open-country hunting, and they also come in surprisingly handy in the timber. I favor light 8X binos for the field but also keep a larger 10X pair in my truck for roadside glassing. 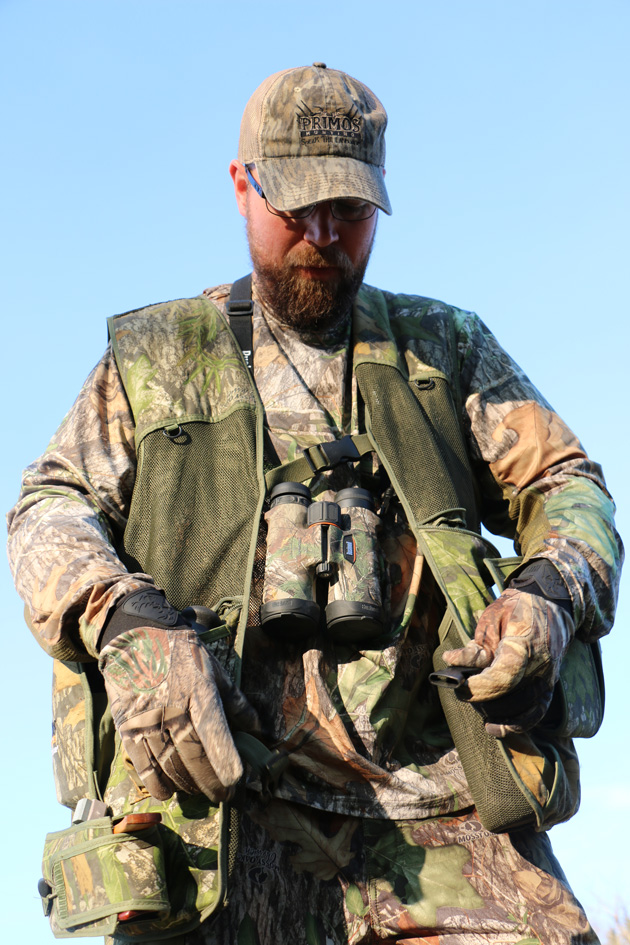 After you’ve established the basics — that is, stuff directly responsible for the job of luring and killing turkeys — you can turn to gear that helps make your efforts more efficient and comfortable.

I might use ratchet clippers as much as some calls. These handy tools let me clip brush, vines and understory vegetation quickly and quietly when preparing a setup. If you’ve ever ruined a pattern on nearby brush or tried to twist your body around pesky saplings at the moment of truth, you know the true value of clippers.

Technology has produced another relatively recent must-have gizmo: the ThermaCell. Years ago, I eschewed spray-on insect repellents and often suffered through multiple mosquito or no-see-um bites during warm-weather hunts. Nowadays, I clip a ThermaCell to my vest and fire it up before I hit the woods. It’s quiet and almost odorless, and above all it keeps biting insects at bay. (One note: Don’t forget about ticks, either. Spray your clothing with a permethrin-based repellent before and during the season. Or wear tick-repellent clothing, such as ElimiTick from Gamehide.)

I typically avoid using headlamps or flashlights in the turkey woods, but I always carry a light just in case, especially for finding my way out of unfamiliar areas after evening roosting sessions. Likewise, I don’t use a knife often while turkey hunting, but I always carry a small folding-blade model nonetheless. I sometimes use the blade to gut or clean turkeys at the vehicle during hot weather if I plan to hunt more.

During those happy days when I kill a turkey, I have stuff to commemorate the event and transport the bird. I use a small hand-held scale/measuring tape to check out a gobbler’s weight, spur length and beard length. Further, a handy cloth turkey tote lets me carry the bird over my shoulder and frees my hands to carry other gear. Years ago, I also carried a disposable camera to take in-field shots of harvested longbeards, but cellphones have eliminated that need.

Many smaller items fall under the what-if-I-need-it umbrella. If I plan to sit for extended periods, I’ll take an extra gel cushion to boost comfort (and extend my patience). I also tote several plastic sandwich bags I can use to keep valuable wooden calls and strikers dry in case I’m caught in a sudden rain. I use another bag to store and protect physical tags, and also include several zip-ties to affix the tag to a turkey’s leg, if necessary.

Through hard experience, I’ve also learned to carry some basic firearms tools. Many hunters use extended choke tubes you can remove with your fingers. However, if your gun has a tube that sits flush to the muzzle, you might want to carry a choke-tube wrench in case you encounter issues. In a pinch, a quarter works almost as well. Likewise, since the advent of scopes and dot-type sights for turkey hunting, I carry a small micro-fiber cloth to clean and dry optics glass. I’ve missed at least two gobblers because of blurry or fuzzy wet sights, and I don’t care to relive those experiences.

Last, during extended or all-day hunts, I’ll also stow a couple of snacks, a bottle of water and perhaps a cellphone charger. Many days, that’s extra weight, but if you’re several hours into a back-country hunt, those little comforts will be worth the slight hassle.

BETTER TO HAVE IT 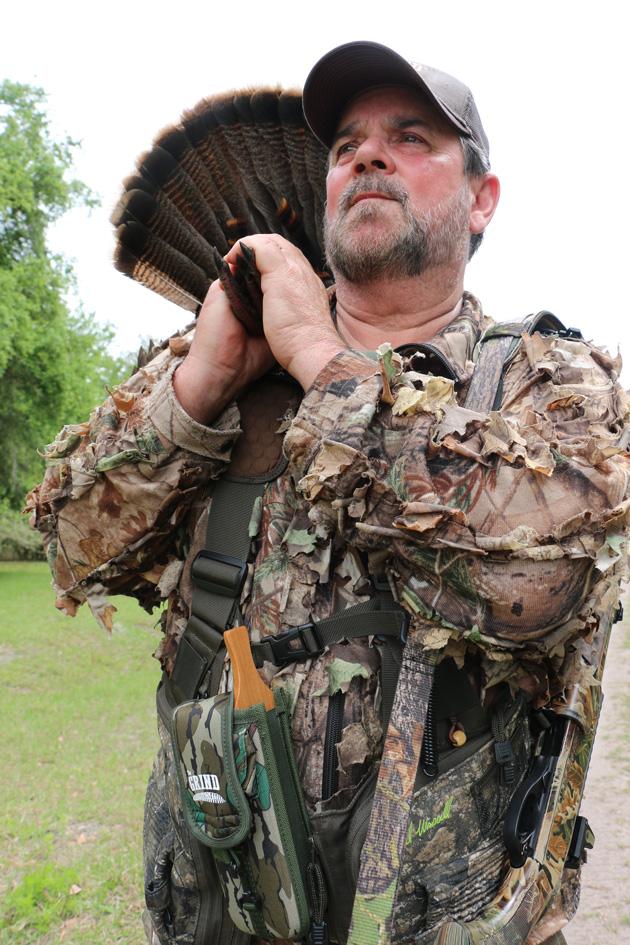 Only you can decide what gear is essential to turkey hunting success. Maybe you prefer to hunt like the guide from the beginning of this article, toting only a gun and a call. Or perhaps you lean toward the writer, who carried the proverbial kitchen sink in his sagging vest. I’m probably somewhere between those extremes, but I have learned this: Don’t go afield without something you might need or want, even if you’ll only use it once a season. If you don’t have it, you’ll miss it. But if you can reach deep in your vest and grab something handy, you’ll smile at being completely prepared.