A slow start quickly morphed into an action-filled afternoon and a memorable Heartland hunt.

The prairies and fields of central Kansas were teeming with Rio Grandes, but the open terrain called for constant glassing and a cautious approach. 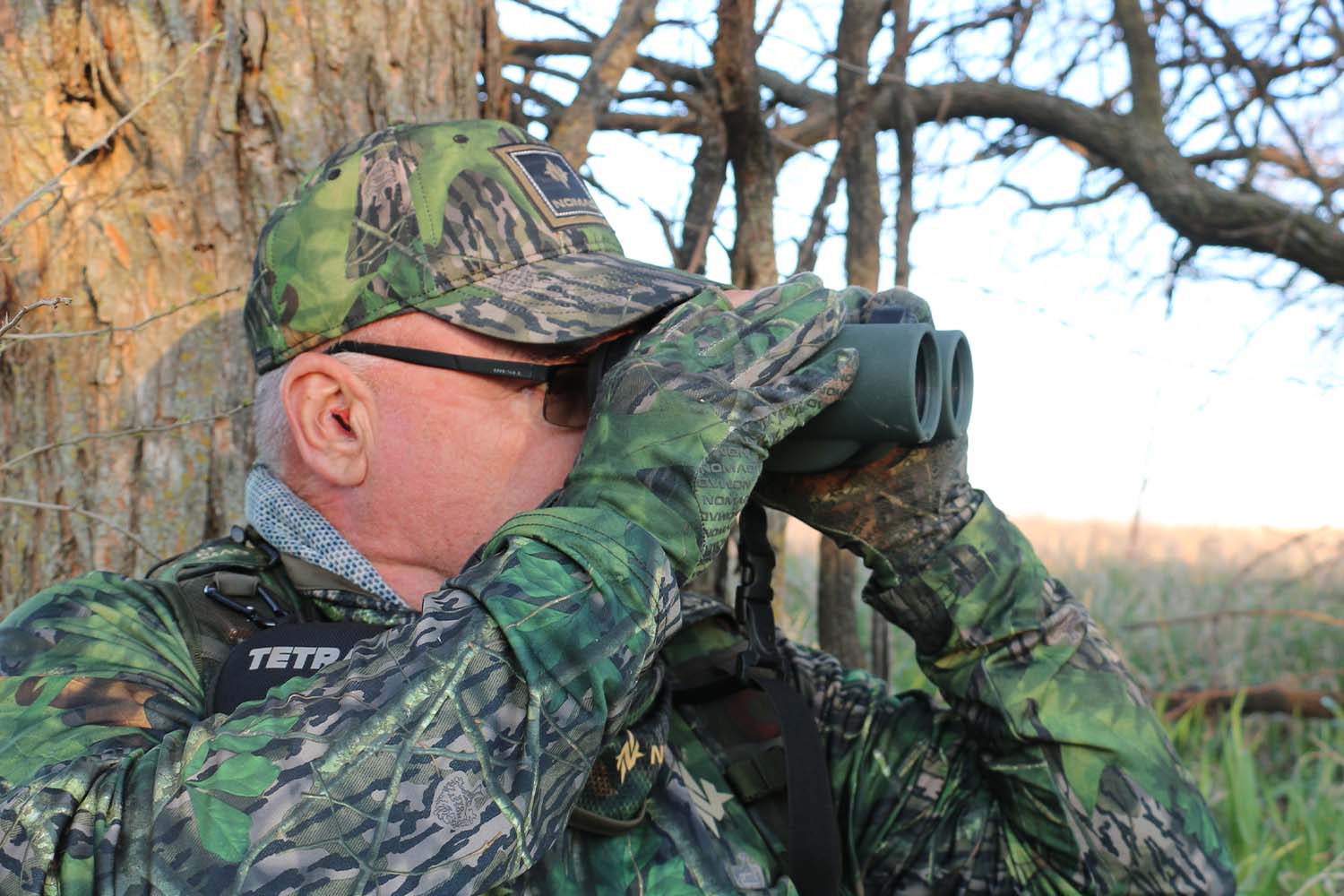 If not for the distant glimmer of truck stops and roadside diners, it might have seemed like the rental truck was cruising toward some distant, uncivilized frontier.

OK, maybe my thoughts of the Wild West were far-fetched, but the approaching day still promised plenty of adventure.

Of course, you expect that in Kansas, where — despite some recent speed bumps — good numbers of hardgobbling turkeys are the norm. At least that’s what I hoped for when I joined several other writers and folks from Nomad and Tetra for a few days of chasing Rio Grandes with Midwest Whitetail Adventures in Clay County, Kansas. The weather forecast looked dicey later that week, but Mike Tussey of Nomad was optimistic when sharing scouting reports from the areas we’d hunt. If we didn’t find success, it wouldn’t be for lack of turkeys.

Morning Delayed
The first day, I tagged along with Tussey and videographer Westin Bryant, starting the morning along a wheat-field edge near a well-used roost. Before daybreak, gobbling from several directions indicated we were in the right spot. After flydown, however, the woods went mostly silent, and we exchanged quizzical glances.

Then a gobble erupted from behind us, and a wad of jakes rushed into our decoy setup. The birds hung around for what seemed like forever, and I silently wished they would wander off. But after a bit, gobbling from the other direction indicated new arrivals, and three longbeards emerged from the tree line. Tightening my grip on the Benelli 20-gauge, I watched the gobblers approach steadily until they were almost in range.

And then the wheat played a dirty trick. The longbeards and jakes stepped toward each other and intermingled in the field, and I quickly realized the tall, green wheat covered everything but the turkeys’ heads. Soon, the field was a swirling sea of red noggins, and I couldn’t distinguish a gobbler from a youngster. When the birds finally left, Tussey and I chuckled about the chaotic scene.

“It’s early,” he said. “We’ll go to another spot and get on some different birds.”

And we did, striking several gobblers almost immediately after exiting the truck. But the turkeys drifted away in a creek bottom, leaving us to ponder the next move. Common sense suggested that we set up and call a bit, so we found a likely spot and prepared to get comfortable. I began looking for suitable trees, but Tussey suggested that I use the Nomad Killin’ Time vest’s stadium seat, which lets you sit back comfortably without leaning against a tree. Soon, I was settled in and ready. 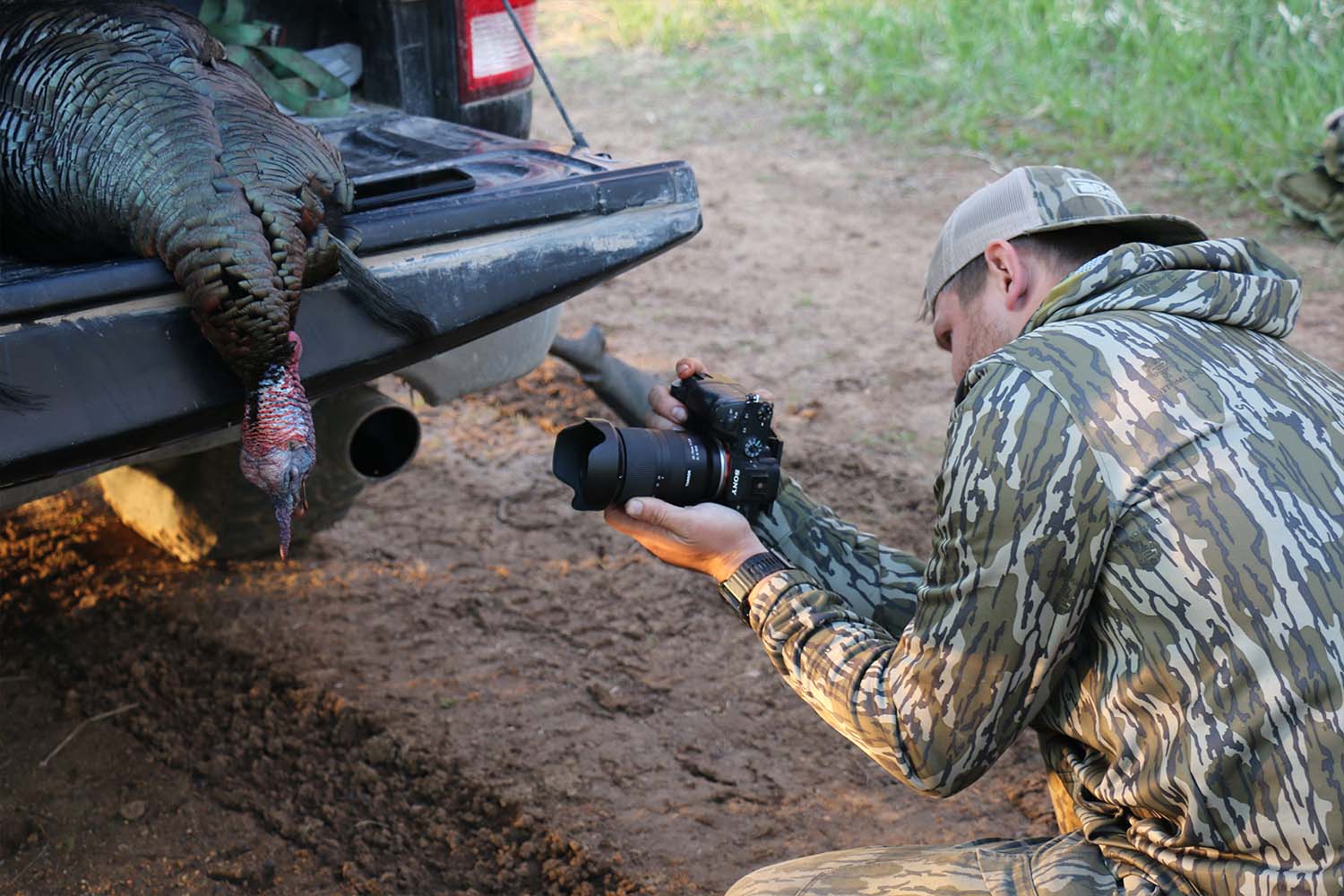 (Photo Credit: Brian Lovett) After a humorous encounter with several jakes during the morning, the author and Mike Tussey filled three tags with gobblers the first afternoon.

I cold-called intermittently for about an hour without any responses. Typically, that would have kicked my impatient nature into overdrive, but I was comfortable and believed we were in a good spot. Tussey confirmed that moments later when he yelped on a box call and a raucous gobble exploded less than 100 yards away.

With my gun ready, I scanned left and right, unsure of the bird’s precise location. But then a brilliant red-and-white head popped up from the bottom, and seconds later, the longbeard emerged and strutted toward our setup. Tussey filmed a few seconds of video on his phone until the moment of truth arrived, and the gun barked to end the hunt. We’d broken the ice with a gorgeous Rio gobbler, and because it was late in the morning, a break for breakfast seemed perfect. Besides, we had all afternoon to find more turkeys.

The Field Scene
After chowing down, we returned to the property. I dropped Tussey and Bryant at an adjacent area and then returned to the creek bottom, as it was an ideal afternoon feeding and travel spot. I had just slipped into the area and prepared to pop in some Tetra Turkey Amp Pods when I heard a shot from Tussey’s direction. Seconds later, a text message confirmed that he’d already killed a gobbler. I laughed and got ready for what would likely be a long wait.

The warm afternoon passed quickly, as I called now and then but received no feedback. Finally, the shadows started to lengthen, and I thought turkeys might leave their loafing areas and ease back toward their roosts. Almost on cue, a hen drifted through to my right, pecking at the field and yelping so softly I barely heard her. About 30 minutes later, another hen trekked through the spot, and my optimism increased.

I’d just set my slate call on the ground when I glanced left and was stunned to see a gobbler enter the field about 40 steps away. Easing my gun into position, I waited for him to approach a few more yards, and then clucked. His head periscoped high, and the shot was already on the way. Another Tussey text followed: “Dead?” he asked. “Yes sir,” I responded. 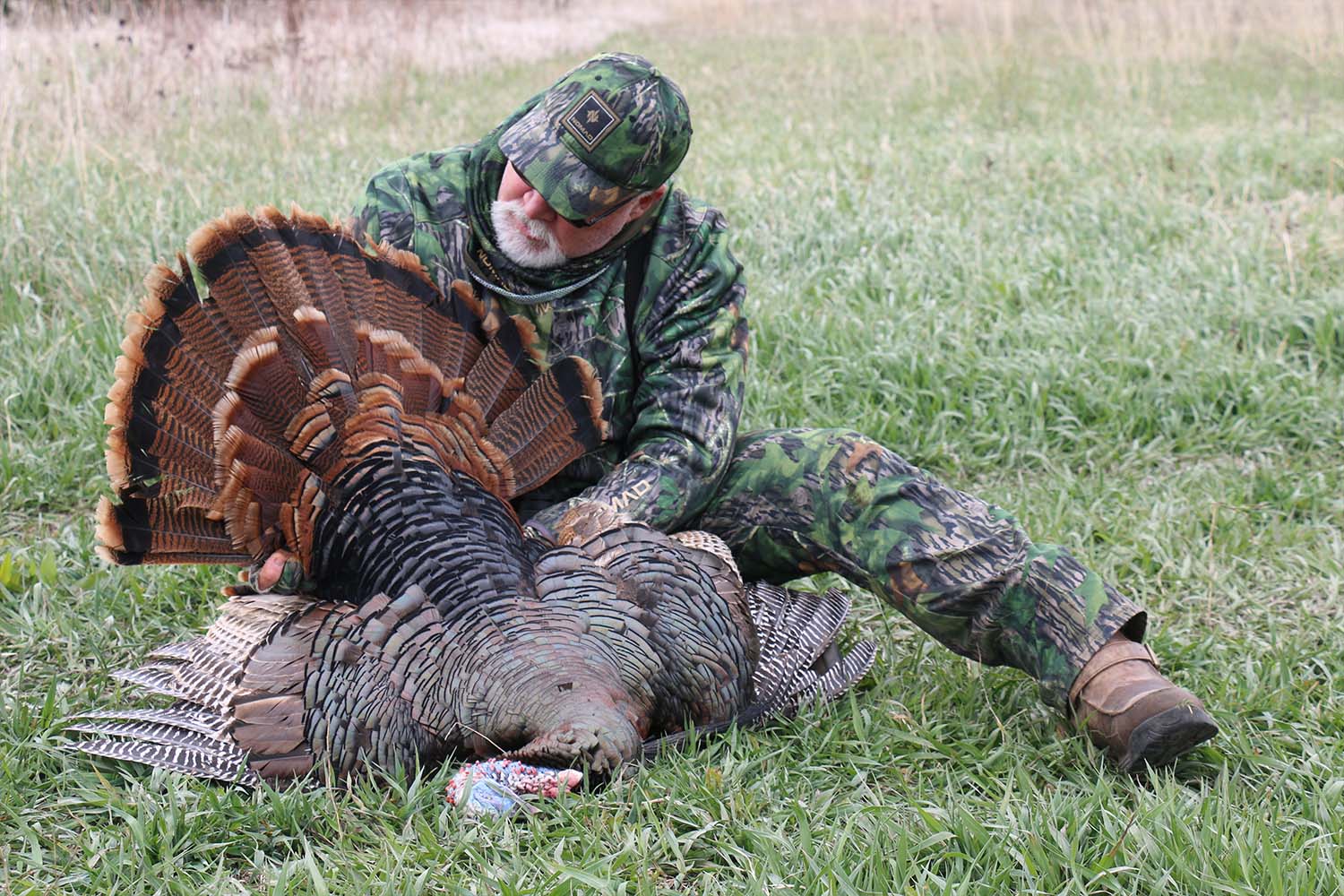 And with that, my Kansas tags were filled, and I played the role of spectator the next few outings. Tussey scored his second bird the next day despite high winds and awful weather. And other members of our party did well, bringing in several dandy gobblers, including some with razor hooks. It snowed the night before our departure, and the temperatures dropped to winter-like levels, but the pressure was off. Kansas had given us a wild Western show beyond expectations, and even as spring ground on and I returned to familiar Midwest woods, I often thought back to that memorable rollercoaster ride in the Sunflower State.