Hunter Waltman of Kiln, Mississippi, purchased a hunting property late last year. While speaking with his new neighbors, he heard talk of a white wild turkey gobbler seen in the area. During the fall and winter, he happened to see that gobbler a couple of times. When the 2019 season opened, Hunter hoped he might call the bird in to shotgun range. As luck would have it, the bird came in range early in the season, and Hunter successfully harvested a rare specimen. Many people thought this white gobbler was a domestic turkey gone wild or an albino. Hunter contacted Kacie Bauman, NWTF district biologist in Mississippi, to get an opinion. She contacted coworkers for opinions on the origin of the bird and if it indeed was a wild turkey. She provided other NWTF biologists, including Dr. Tom, with photos of the gobbler and of its legs. 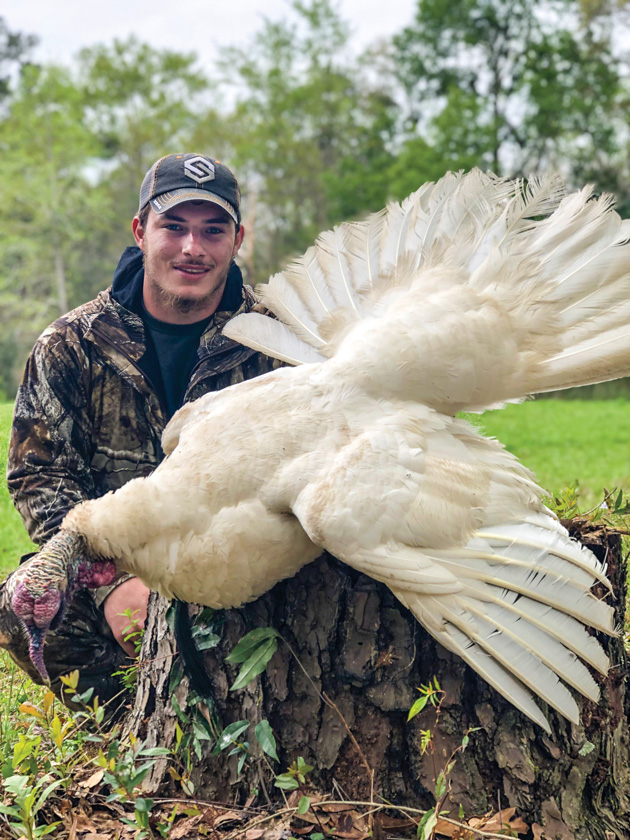 Over the years, I have seen a few photos of white turkeys such as this one but have never seen one in person. This was definitely an adult gobbler that has not spent time in a pen. The photo does not show obvious signs of domestic origin. The naked head and neck do not appear to be as ornate as one would expect in a domestic turkey gobbler. Even in a first generation cross (F1) between an Eastern wild turkey and a domestic bird, there would be evidence of domestic traits such as a large, ornate head and neck and an excessively large dewlap. In addition, an F1 would exhibit short lower legs that would be heavier than those of a wild Eastern. The scaly tarsus is a definitive test for wildness. The wing and tail feathers do not exhibit evidence of a pen-raised bird. This gobbler is not an albino, as the head, eyes, legs and beard are normal colors.

Instead, biologists have determined this gobbler to be leucistic, a condition also known as partial albinism. Leucism is a genetic condition in which melanin and other pigments are inhibited from being deposited in the feathers of a bird or hair of a mammal. The resulting color can be patchy, such as in a piebald whitetail, or may be pure white. Melanin and other pigments are present and result in normal eye, beard, head and leg color. A more common example of leucism in wild turkeys is the smoky gray phase. The scaly tarsus (lower leg) is great evidence both of the origin of this bird and its partial albinism. The scales are of normal color but the spurs and toenails are almost white. Though I could not measure the tarsus in the photos, the length and width of the tarsus definitely seem to be indicative of a wild bird. I believe we are safe in calling this specimen a leucistic Eastern wild turkey. Very rare indeed!

I am not sure we can put an accurate label on the occurrence rate of extensive leucism in wild turkeys. Smoky gray phase wild turkey occurrence is variable regionally, and this condition is even rarer. It is probably safe to guesstimate its occurrence as one in several thousand.