Most Oklahoma turkey hunters have stories to tell of their adventures in the forest or field. But the story that Stephen Webb of Sterling, Oklahoma, tells can easily top most any hunter’s tale.

Webb, at the age of 45, quite literally hunted himself to death.

But thanks to the medical experts at the Oklahoma City Veterans Affairs Hospital and a special life-saving vest that he was wearing that day, Webb is very much alive and able to share his tale of a turkey hunt that could have ended in tragedy.

Webb’s story is one that puts a positive light on the often maligned VA medical system. And it’s also a story that holds a lesson for other outdoorsmen: Be prepared for anything that could happen when pursuing outdoor activities.

It all started with a sleep study on Webb in April 2015. A pulmonologist noticed some unusual readings in Webb’s heartbeat. About a week later, doctors asked him to wear a halter that recorded heartbeat data. Once they saw the data collected over 48 hours, the doctors insisted that Webb visit the VA hospital in Oklahoma City the next day. It would be a day that would end up saving his life.

SET UP FOR A SLAM

In the previous year, Webb said he’d experienced some minor chest pains. But doctors could not find anything wrong. The sporadic pains didn’t stop the Army combat veteran from deer hunting the previous September. And they didn’t stop him from going after spring turkeys, either.

“Turkey hunting: That’s my passion. That’s my thing,” Webb said. And it became even more of a passion three springs ago, when Webb found himself in a position to complete the Grand Slam of turkey hunting, harvesting all four subspecies of turkey in the U.S. in a single year.

“Everything was just coming together,” Webb said. In March, he and a buddy decided on a whim to drive to Florida to pursue an Osceola wild turkey. Webb said achieving a turkey Grand Slam wasn’t on his mind in the beginning. The men drove nearly 20 hours, and the day after arriving, both of them bagged a Florida turkey. 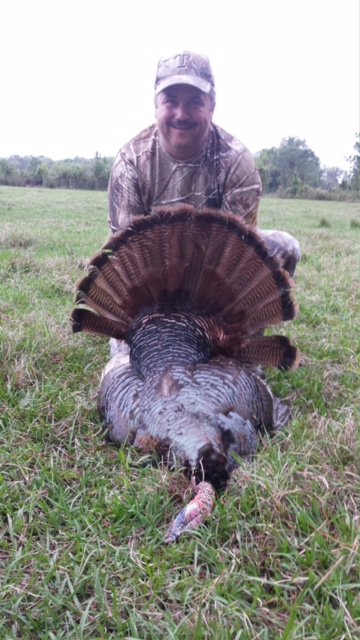 After returning to Oklahoma the next day, Webb was back in the woods again. He quickly harvested a Rio Grande wild turkey, then went back to his spot the following day and shot an Eastern wild turkey. “So, I decided then I’m going to go ahead and kill my Grand Slam,” he said. 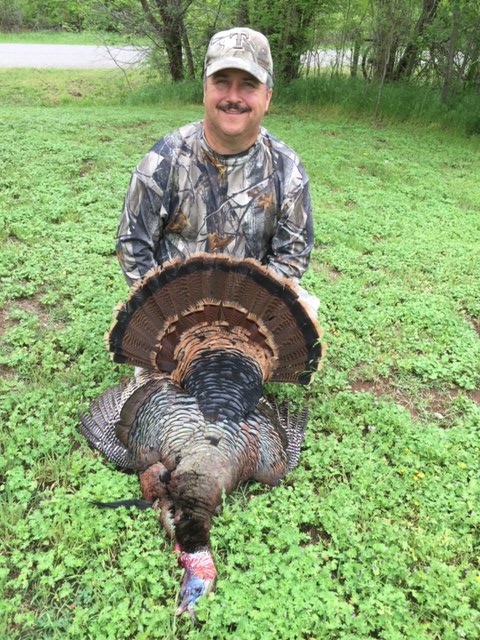 The final turkey that Webb needed to bag for the Grand Slam was a Merriam’s wild turkey, which is found in several western states. So, Webb began planning a trip to New Mexico for late April. 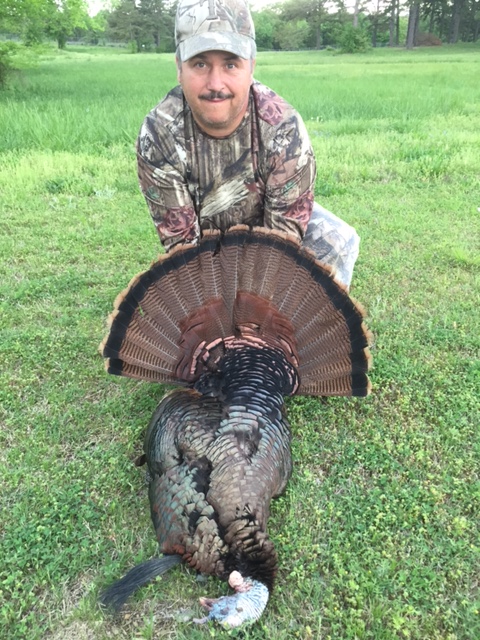 On April 23, 2015, Webb went to the VA medical center. He wondered why he didn’t have to wait several months for an appointment with doctors, but soon learned that every doctor he saw seemed concerned.

At the time, the doctor did not have the dye needed to perform an angiogram on Webb. But he was quite certain that Webb had a condition known as torsades de pointe. The condition is a type of irregular heart rhythm that can lead to sudden cardiac death. During an attack, the heart’s lower chambers will begin quivering at some 250 beats per minute. Death could result in less than 20 seconds.

“And that’s why they put me in a vest,” Webb said. “He said this is so dangerous, we want you to wear this LifeVest.”

The LifeVest is a specialized garment made by the Zoll company. He was soon meeting with a nurse from Zoll to be fitted with a LifeVest.

“She said, ‘The only time you take this off is when you shower,’” Webb recalls. “‘You don’t realize that what you have is a killer; it kills people. You don’t live from it. You are very unstable, and you can die from this. The vest could save your life.’”

The vest monitors the wearer’s heartbeat and is equipped with a built-in defibrillator. If the vest detects an attack in progress, it will automatically administer an electric shock to try to restore a normal heartbeat. So, Webb agreed to the LifeVest, but he said he didn’t intend to wear it for much more than a few days.

A HUNT TO DIE FOR

On Saturday, April 25, 2015, Webb had a date to go turkey hunting with some friends. He was going along to serve as a caller, while the other two tried to bag a tom. As they walked to the hunt area, Webb experienced some pain in his chest.

“We probably walked about a mile that morning total. And all of a sudden, I just got real dizzy — no pain, just dizzy. I told Russ and his dad, ‘Man, we’ve got to stop for a second. I’m real dizzy.’”

As soon as Webb sat on the ground, an electronic voice began coming from the LifeVest. “Stand back. Stay clear,” the voice said. “Two minutes and 21 seconds, and it was all over,” Webb said.

He had passed out for a time, and when he awoke, one of his hunting partners was putting a cushion under his head. The other hunter, Russ, had gone to get the vehicle. But Webb said he was feeling fine.

“I thought I had just blacked out. When I came to, I felt perfectly fine,” Webb said. “So, I’m carrying stuff out of the field, and I feel great. Russ drives up … and tells me, ‘I think you got shocked. You just tightened up and went to shaking.’”

Webb soon called Zoll to report what happened, and the Zoll employee asked Webb if he had any blue gel on him. “I don’t think so,” Webb said, but as he lifted his shirt, he saw his whole chest was blue with gel.

The LifeVest had indeed intervened and shocked Webb 81 seconds after his attack began. A few hours later, a cardiologist in Oklahoma City told Webb the LifeVest had saved his life.

“‘The episode you had,’ he said, ‘if you would’ve had that anywhere else not wearing that vest — it wouldn’t matter if you were in the turkey woods or right here in ICU — you would not be with us now.’

“I thought it was no big deal,” Webb said, “until I got to the hospital, and they told me I had died.”

Doctors quickly placed Webb into another LifeVest. “For four days in ICU, I wore the vest because they didn’t think they could get to me in time if I had another episode.”

Among the conditions responsible for torsades de pointe are blockages in the cardiac arteries. Doctors found that Webb indeed had two blockages, which they suspected were the reason for his attack. On April 29, Webb was allowed to remove the Zoll LifeVest just before undergoing open-heart surgery, in which surgeons performed a triple bypass.

Since then, Webb has had no more chest pain and no more torsades attacks. He learned several lessons from his experience. Anyone experiencing pains should have them medically checked out. Listen to your doctors. And don’t stop doing what you want to do.

“I hunted until the day I fell on the ground,” Webb said. “In fact, my cardiologist told me yesterday, ‘You don’t understand. You’re just a remarkable story. Most people who have what you had don’t get to stand here and talk to us about it.’ He said they just don’t live.

“I thank Zoll, the VA and the good Lord above that I’m still here. I’m not the most religious person, but I know the good Lord was looking out for me.”

Webb was meant to complete the Grand Slam. Just over a year after his heart-stopping hunt, he completed the quest with a Nebraska Merriam’s. Not even the grim reaper could stop him. 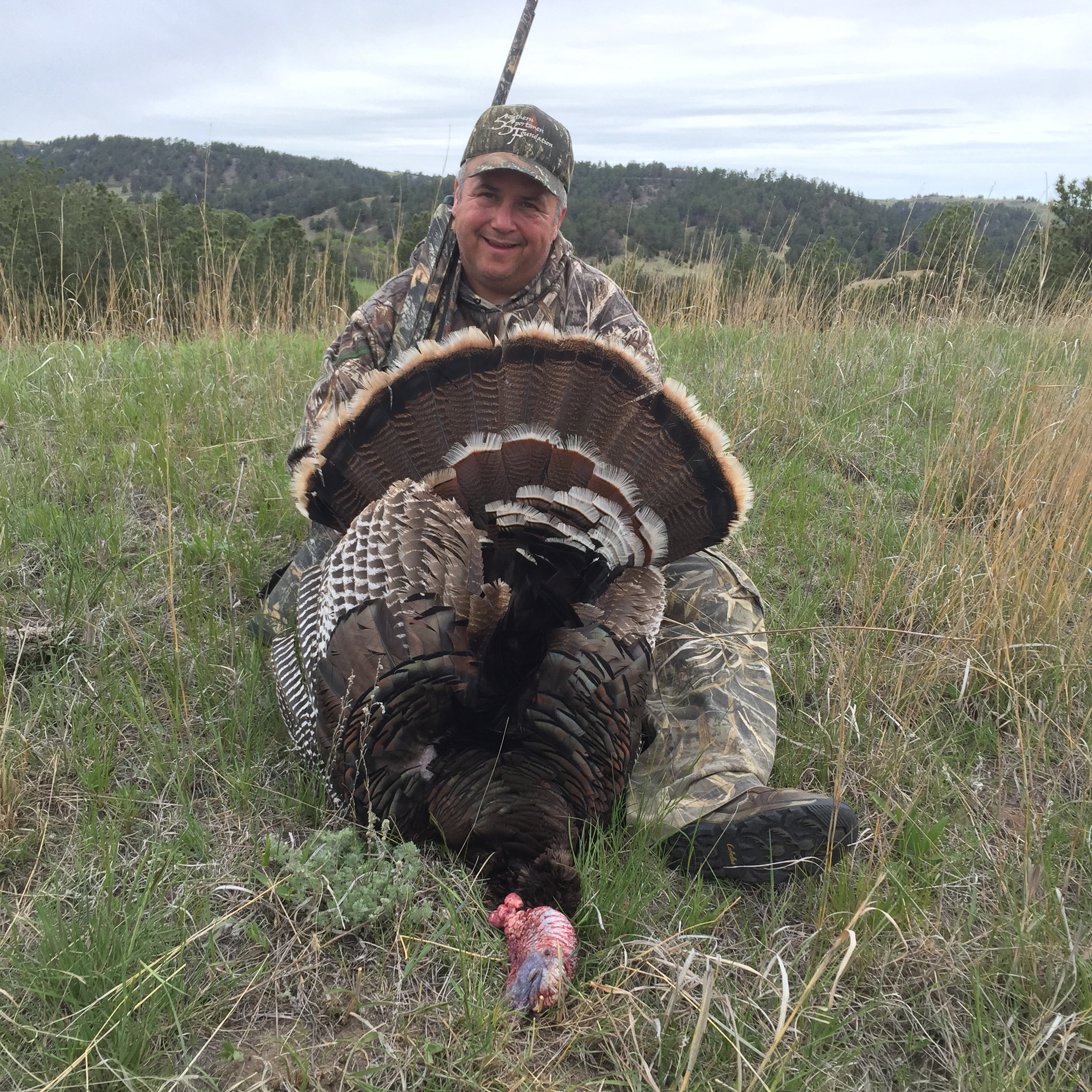