The Loaner Gun: Paying it Forward

April 23, 1993, hot, clear, muggy. It’s my first Rio Grande turkey hunt. I’m doing it in style, as a guest of Realtree on a 40,000-acre ranch near Alice, Texas. I’m 46, have been chasing turkeys — always Easterns until now — for nearly 20 years, and I’m beginning to think I’ve learned a few things. Subsequent years will prove me wrong, but those are other stories.

Bill Jordan, Realtree founder and host of the hunt, has sent me into a 2,000-acre section that, as it turns out, is stiff with uneducated, unsophisticated gobblers. In the first 90 minutes, I’ve called seven longbeards into range. So far, I’ve let them all walk; hunts like this are beyond my ken, and I’m in no hurry to make it end.

After longbeard number seven walks away unscathed, I move toward a bird I’ve been hearing for a while now. He’s not far away, but he’s on the far side of a mesquite thicket, and I’m not eager to fight my way through it. But, I can get within 100 yards without entering the thick stuff, and after I’m as close as I can get, I hit him hard with a box call. He cuts my yelps with an equally hard double gobble, and 30 seconds later, he gobbles again, much closer.

I am set up and ready, and a good thing, too, because mere seconds later I see his feet approaching rapidly along a deer trail through the thicket. I have barely enough time to shift my gun barrel when he steps into the open at 15 yards and comes to an erect stop. He looks 5 feet tall as I watch him over the gun.

The gobbler is in full sunlight, I am in deep shadow. Nothing separates us but air. He is mine any time I want him, but as mentioned, I’m in no hurry. I look him over, snood to toenails. His head and neck display the fiery red and almost startling white all turkey hunters long to see, his bluish caruncles all but swallowed by the surrounding white. The flat place below each eye is a strange but beautiful amalgam of iridescent red and maroon I’ve never seen before on a gobbler. His beard is thick, full, odd-looking; I suspect a double. His breast feathers are dark as a cave, but they cast a metallic sheen like oil on still water. His spurs make me gasp; at 15 yards, in full sunlight, they stand out against the white dirt path like tapered ice picks.

He is, in short, magnificent.

It flashes through my brain that he is almost too fine a bird to kill, but the thought leaves as quick as it came. Pass this one up? Fat chance. There is no denying longbeard number eight.

I must have snickered or snorted or emitted some other dismissive sound when I was having that ridiculous catch-and-release thought, because just then the gobbler did the trademark wing-shuffle, turned and took the first step back along the deer trail that would take him quickly out of sight. I didn’t let him take the second.

My double-beard suspicion had been wrong. He had three. Back at camp, he weighed 22 pounds, impressive for a south Texas Rio. His beards measured 10½, 8½ and 6½ inches; his spurs were twin 13/8-inch daggers.

This was before Realtree’s partnership with Remington. The gun du jour was a Mossberg 835, the first commercially available shotgun chambered for 3½-inch loads. The Realtree folks had several 835s on loan that spring, all in original Realtree camo. The next day I killed a second good longbeard with that gun, this one at more than three times the range of the first, and I fell in love with that ugly, stubby, mule-kicking, turkey-stomping 835.

At the end of the hunt, I asked Bill if I could buy the gun. He said no, but then grinned and gave it to me. For more than a decade afterward, it was my turkey gun, and I killed a pile of gobblers with it, hunting multiple states each spring.

Fast forward a quarter century. The 835 has been retired for close to 15 years. The thing kicks like a howitzer, and eventually I laid it down in favor of other shot launchers that didn’t give me a headache with every trigger pull.

It was a week before the 2018 turkey season. We were standing in the road in front of my rural home comparing scouting notes: neighbor Patrick, his teenage son, Clayton, and me. I asked Clayton what gun he hunted with.

“This year I’ll be using my trap gun,” said Clayton, who competed on his high school shooting team. “It’s an H&R trap model. But I’m saving up to buy a Mossberg 835. I won’t have it this season, but next year I will.”

“Wait a minute,” I said, and went into the house, returned with the well-used Bill Jordan 835 and a box of 3½-inch turkey loads. “Why don’t you shoot this one this spring? Make sure it’s really what you want.”

I told him how I’d come to own the gun, and his eyes widened at Bill Jordan’s name. Clayton took the gun in both hands, holding it like the precious artifact it was. Bill was one of his heroes.

After the season ended, Clayton brought the 835 back, along with seven shells from the 10-pack box. He’d killed two fine gobblers and had shot once at a paper target to check the pattern and get the feel of the gun. Both kills were at 40-plus yards and were clean, dead-right-there affairs.

“I sure appreciate it,” he said, reluctantly handing me the 835. “I’m absolutely sure I want one now.”

“Well,” I said, “if someone was to give you a gun like this, do you think you could use it for a few years and then give it to somebody else who was young and just getting started in turkey hunting?”

“Well, yeah,” Clayton said, a little puzzled. “I guess I could.”

I handed the gun back. “Then do it. This old gun is yours. It doesn’t have to be anytime soon, but you have to promise me you’ll give it to some young hunter you think is worthy and who’ll also agree to pass it on to someone else when the right time comes.”

There are moments you remember. We all have them, clear as crystal, on instant recall. One of mine, now, is the expression on that young man’s face, as he looked first at the gun, then at his dad, then at me. I don’t remember his words, but I’ll not forget that look. 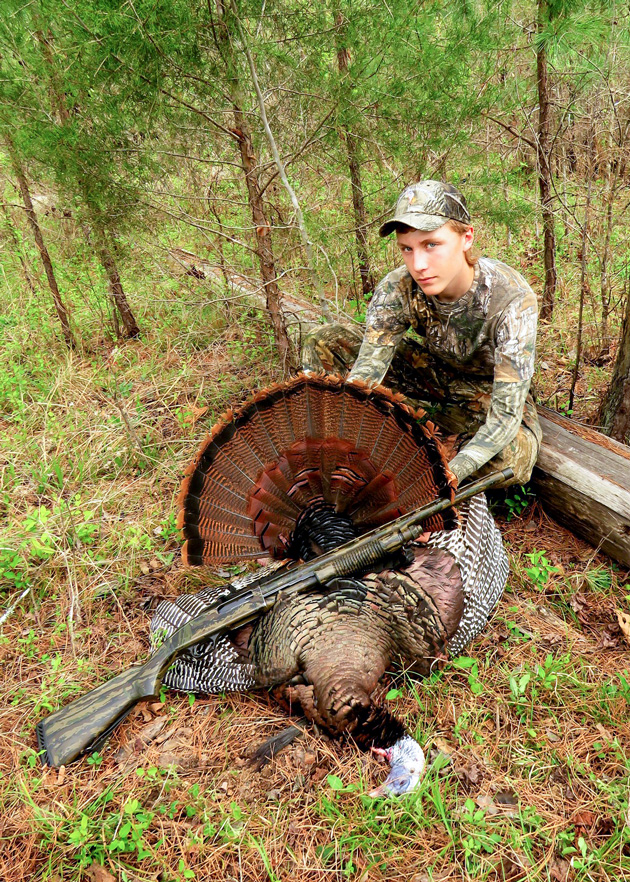 ICING ON THE CAKE

Not long after, I was talking to my old friend David Blanton, Bill Jordan’s right-hand man at Realtree.

“I love it!” David said. “What’s Clayton’s address? I’ll get Bill to write him a letter about the gun and how he came to give it to you.”

And Bill did, even though he got the date wrong by a few years. So now, my young friend Clayton has not only a fine turkey buster in his custody, but also a letter of provenance, on Realtree stationery, to support it.

He also bears a solemn and important responsibility. Granted, it’s only important to a tiny universe: himself, Bill Jordan, David Blanton and me. But it’s no less important because of its narrow scope. As Bill said in his letter, “It’s nice to know that after Jim and I are both long gone, that old gun is still going to be killing turkeys, and that we were both links in the chain of its history.”

Enjoy your shotgun, Clayton. Use it well and long. But be sure, be very damn sure, that someday you pay it forward.

We need to keep this thing going.