Long Drift to a Longbeard

We floated downriver in the dark. Headlamps showed us the way and helped us avoid cracking into rocks with our kayaks, which is never a good thing. Our Poke Boats had already proved amazingly durable for floating a river and were extremely stable if a shot opportunity arose. After a 20-minute run downriver, we slid to a stop near a tall bank. We were ready. Now the game began.

An owl hooted, and a longbeard gobbled. That’s when our creep began. My son Will and I pushed off into the slow current in the dawn light. I slipped the diaphragm call into my mouth to moisten it. We let the current take both kayaks. I had my gun leaning forward for action. Will floated behind me with his Nikon strapped in a carrier on his chest. Both of us needed our hands free for the paddles.

Rounding a corner, I signaled Will to pull over for a bit. It wouldn’t do to float too far and maybe go by our bird. We listened for a short time, and, sure enough, a gobbler sounded off. He was on the ground now about a hundred yards ahead of us. We pushed out from shore to make the stalk. The tom had dropped from his roost tree, a huge cottonwood on the river bank that was a perennial favorite of this flock. The birds liked to fly down, crossing the river to land on a treeless sandbar that had nothing on it to injure a wing. 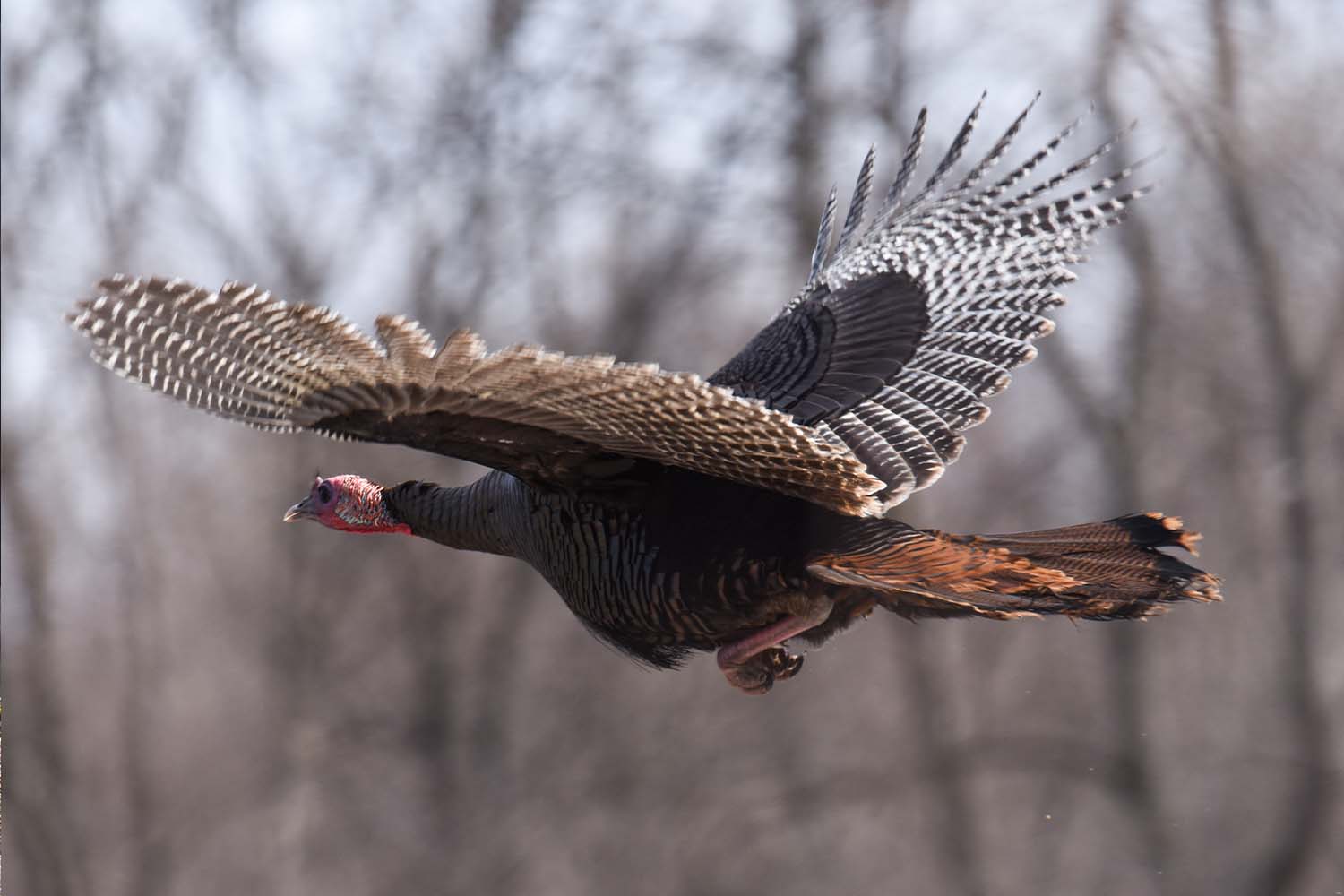 The closer we got, floating quietly, the more my blood began to boil. We were close enough now, and the gobbling was loud. I placed my paddle on the padded thwarts and picked up my venerable Ithaca Mag 10. It was game on. Or was it? We rounded the last bend to the sandbar and there wasn’t a bird in sight. I could hear the purring and putting of the hens, so Will and I pulled over to wait. Gun in one hand, we waited. The gobbling began again. He was back in the woods. No doubt the hens had pulled him away from the sandbar. All we could do now was wait.

The constant gobbling was encouraging while we sat there, and there was really no need to call. Those hens had way more powers of attraction than my call, so why bother. The main thing in our favor was that those birds would sooner or later need a drink after feeding. It was 9 a.m. before we spotted the first hen to return to the sandbar for a drink. She was wary and we made no movement. Both Will and I were camoed up in facemasks and gloves, so our chances were good. Hopefully her boyfriend wasn’t far behind, and he wasn’t.

Few things induce heart pounding like that of a big red head with a rope for a beard emerging from the foliage. I settled my heart down as best I could and touched off. A load of lead fours rolled the gobbler on the sand. We took in the picturesque setting, soaked in the opportunity we were provided and then paddled home to enjoy the spoils.

That night, I pounded one side of wild turkey breast flat with a meat hammer. Then rolled some wild rice dressing in that meat log, wrapped it in bacon strips and popped it in the oven. It doesn’t get much better than that.

*Editor’s Note: Hunting wild turkeys from a kayak, boat or other vessel is not legal in every state. This hunt took place in Minnesota, where it is allowed, provided that the vessel does not have a motor. Check your state’s hunting regulations or call the appropriate state wildlife agency for more information.** 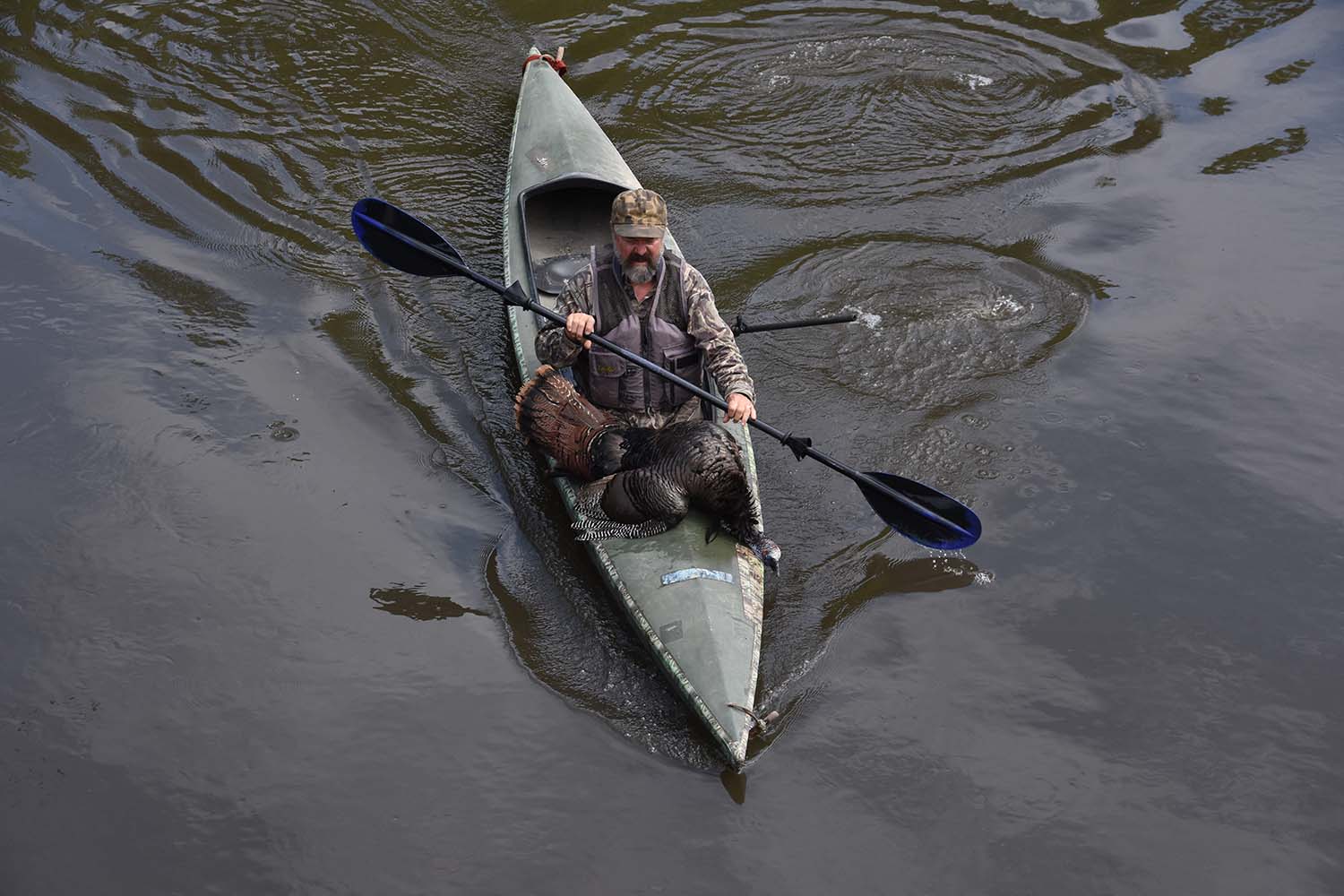 Luke Koch attempted his first float hunt last spring in Wisconsin, starting by scouting a stretch of river surrounded on each side by public land. He and friend Levi Glines knew birds were in the area and the gobblers were mostly unpressured. They put their boat in 30 minutes before shooting light and floated until hearing the first gobble. No calling from the boat was needed, and once on shore, they used onX Hunt mapping to find terrain to disguise their movements.

The two snuck in on a dry creek bed and popped up within 100 yards of several gobblers in mid-May. It took about an hour to get a bird in range. “It was like Vietnam; you were lucky to get a 25-yard shot with the thickness of the fern bottom,” Koch said.

The uncommon approach took work, but Koch said he believe it was well worth the effort to get close to mostly unpressured turkeys.

“I’m not afraid to do stupid things to chase after a gobble,” Koch said. “But this made it extremely efficient to be able to hunt both sides of the river. It was almost like the birds had been untouched.”.