The rise of female hunters has been exciting for all of us to witness over the years. It’s common nowadays to see ladies enjoying camp together and learning from each other in the field. Fifteen years ago, however, I didn’t know one other female who hunted. Being self taught and from a family that didn’t hunt, I felt alone. But being alone wasn’t always a bad thing. It helped me focus on what I wanted to do. And what I wanted to do was hunt.

My first turkey was an Eastern. I was somewhere around 19 years old, and I lived in Springfield, Missouri, with my college roommate. I can remember being told about the amazing eyesight turkeys had and how you had to be very still. I sat like a statue against a tree with a borrowed shotgun balanced on my knee. My back hurt from sitting in an uncomfortable position. But the turkeys came in, and it was my first time seeing them up close in the wild. When I lifted the gun to shoot, they began to run. I shot, and my first turkey took a nosedive into the ground. I ran to him and watched him flop around. I was in total disbelief that I had done this, and I knew in that moment that I would never be the same.

The photo accompanying this story has never been published. I found it recently in storage, and it brought back a flood of memories. This was before my career in the industry that I love. This was before I knew how much the wild turkey would impact my life. All those years ago I fell in love with these animals, and to this day my obsession continues to grow. 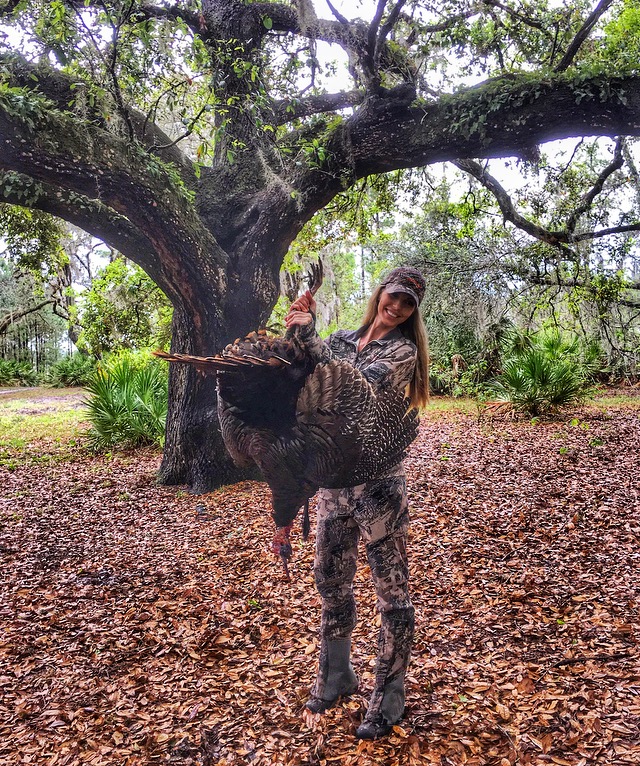 As I grew into my career in the hunting industry as a host and producer, I began to meet some people who would become lifelong friends. My television show aired very closely to a series that featured a beautiful and charismatic female host named Jana Waller. Needless to say, the first time I met her in person we became instant best friends. A few years later, I found myself flying to Montana with a turkey tag in hand and one week to put a bird on the ground.

Jim Kinsey and Jana Waller are some of the nicest people you’ll ever meet. They’re also some of the best and most passionate outdoors-people I know. So when they became determined to get my first Merriam’s for me, I knew it would happen eventually.

We hunted in the mountains around Missoula, Montana. We also hunted in the river bottoms and fields. We went anywhere that the turkeys could have been, but to no avail. At one point, Jim and I even tried running fast enough to catch a gobbler that was not interested in coming to our party. Finally, on the second to last day, we made progress. Jana was behind the camera when I made a long shot on my first Merriam’s. I remember the celebration in the field, the high-fives, and sitting in the shade having lunch with that bird lying on the ground next to us. That evening Jana cooked the turkey in her kitchen and we all relived every moment of the hunt together. When it all comes together we create these memories that will still be beautiful when we are old, and I look forward to telling that story with Jana when we’re 90. 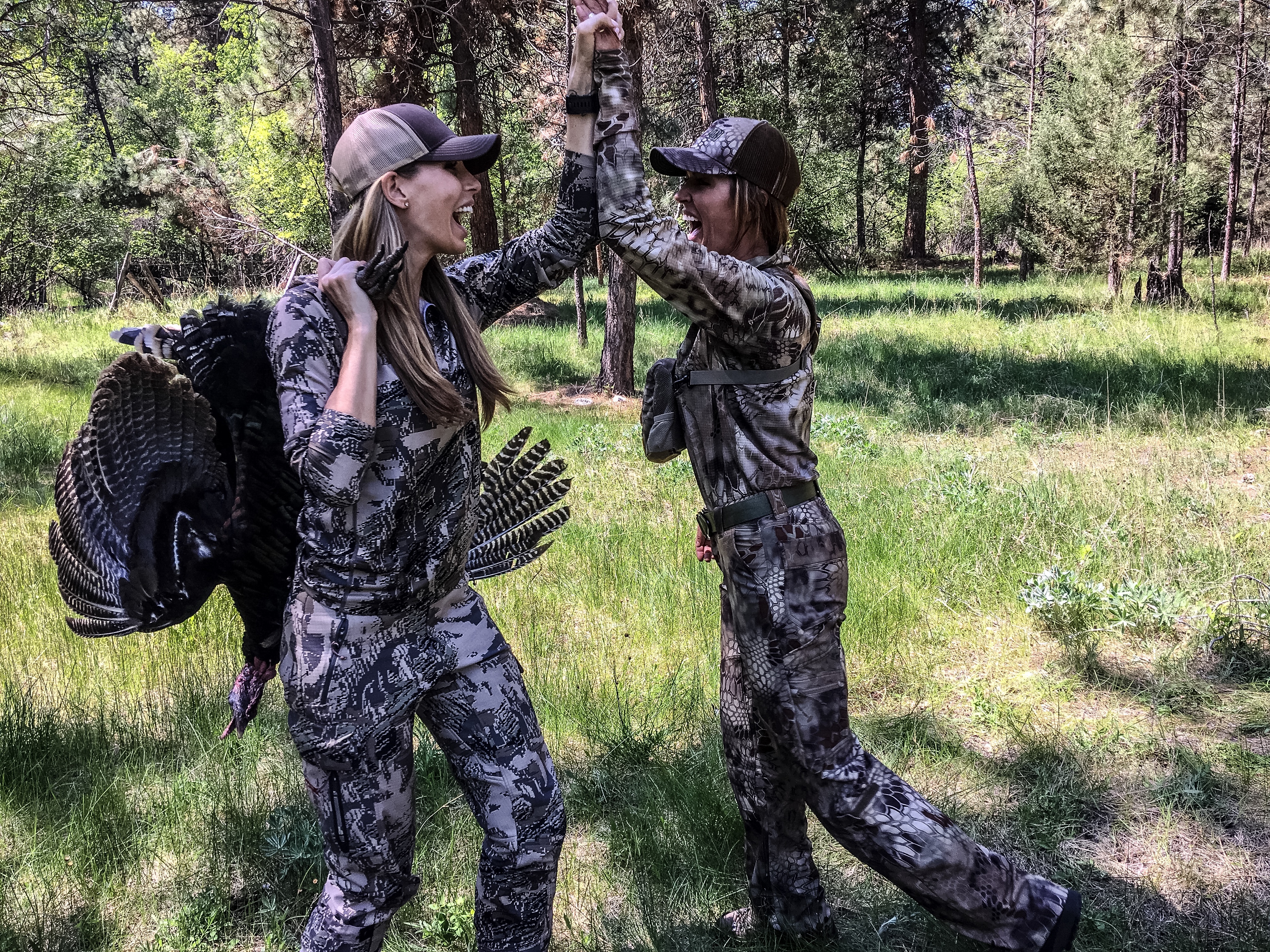 To complete the Grand Slam, you have to add Florida to your list of states to hunt. I’ve spent years hunting the Sunshine State for hogs, but I had never attempted to go after my Osceola. Fortunately for me, I have some friends who are well known for guiding people on that exact mission. The guys at God’s Country Outfitters invited me down, and because I had hunted with them for alligators and hogs previously, I knew it would be a good time.

The morning of my hunt it was obvious that we needed rain gear. As we got set up before daylight, the smell of a rainstorm was prevalent. The trees around us were loaded with hens and a couple of gobblers, and all we needed was for one to come our way.

As the rain began to pour down, the birds moved in the wrong direction. Grabbing palm fronds and running for the tree line, we circled around and got into position. The visibility was low and the rain came down in sheets. A hen walked directly toward me, and I remember thinking that she looked miserable with the water running off of her. Even soaking wet, she must have had that special something because a tom followed every step. He moved closer, and when he got to around 10 yards I had a clear shot. I lifted my gun and fired the first shot, but it didn’t look good. He turned and ran, and I jumped up to follow.

As I ran into the field and fired a second shot, the lightning struck in the background. The follow-up shot worked perfectly. In the pouring rain I ran to retrieve my bird. He was a beautiful animal, although it was difficult to see much of him in the storm.

Back at the lodge I used a fan to dry him out so we could get some photos. I don’t regret that. I’ll always remember how he looked in the rain, but seeing his feathers shine was spectacular.

Also, as a side note, we were not able to eat this turkey. It’s the first time I’ve ever harvested a bird that we couldn’t consume. He had an infection in his leg that turned the tissue and meat inside a dark green color, so we opted not to consume the meat. This hunt meant the world to me in so many ways, and because I may not have the chance to harvest many more Osceola turkeys in my life, this is a cherished memory for me.

The final piece to my Grand Slam puzzle was the Rio. Although I thought a few years ago that I was on a hunt that would produce my Rio in Nebraska, I ended up taking an Eastern instead. And so in the spring of 2017, I traveled to wine country in California to hunt with my friend R.J. Waldron with Northwind Outfitters. If you’ve never been to Napa Valley in the springtime, I highly recommend it. Not only do they have a healthy turkey population, there is something truly magical about watching the sun rise while you look over the vineyards on a perfect crisp morning.

It took me two days and one missed shot to accomplish my goal. When the bird finally committed and I slowly pulled that trigger, it all came together so perfectly that I could barely wrap my mind around it. The final bird in my Slam was gorgeous and a reminder that sometimes it takes us a while to accomplish our goals, but that doesn’t make them any less attainable. I took my time on my Grand Slam. It took me nearly 15 years and a lot of lessons learned, but walking away with that checked off of my list felt incredible.

And this cumulative journey over the years allowed me to see that all across the United States we have wild turkey populations that are flourishing and expanding. More people are beginning to see the joy in hunting them, which leads to even more people assisting with the conservation efforts surrounding these incredible animals. My work with the National Wild Turkey Federation has taught me that conservation through hunting and working toward retention and recruiting a new generation of hunters is what will keep this magical experience alive for generations to come.