Use these dos and don’ts to forge an efficient, successful spring gobbler road trip.

Life is short, but spring turkey seasons are even shorter. That’s why more turkey hunters are taking their shows on the road, hunting gobblers not only in their home states but also crossing state lines to hunt as non-residents.

Road tripping adds another degree of difficulty to an already difficult undertaking, but turkey hunters don’t think so much in terms of difficulty as challenge. Pile it on. We relish it.

However, a two-week road trip takes much more prep work than going to the nearby 300-acre farm you’ve hunted for years and know like the back of your hand. If you want to put together an out-of-state hunt — or a back-to-back string of them — here’s a partial list of dos and don’ts. Ignore them at your peril. 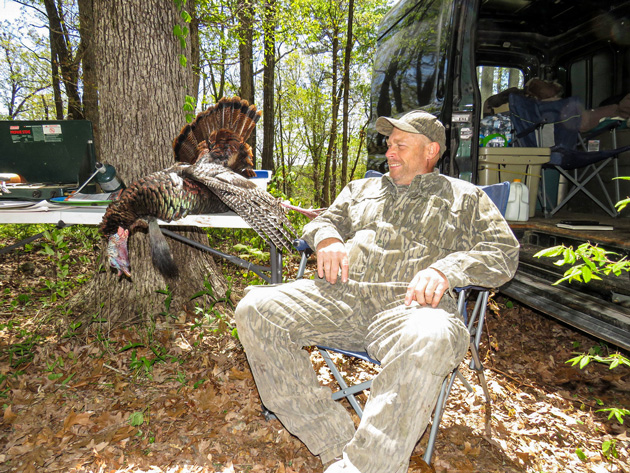 Don’t: Get lazy with your homework. The Internet makes this fact-finding exercise a lot easier than it used to be. Look up state harvest statistics, especially for the past three or four years, in the specific area you plan to hunt. Also seek hunter success percentages, hunter numbers or permit sales, and the strength of the hatch two years earlier — to determine how many 2-year-olds, relatively, you’ll have to work with — if that information is available.

Do: Get a good set of maps. HuntStand, onX Hunt and other downloadable hunt mapping apps are fine for in-the-field work, but for long-distance scouting, they’re woefully inadequate. You need large-scale maps for this chore, and as old-fashioned and geezerish as most hunters younger than 40 think they are, U.S. Geological Survey topographical maps are an incomparable aid for this application. State map books published by DeLorme are a distant but more affordable second option. Either way, if you plan to hunt a state-owned or state-managed wildlife management area, the state wildlife agency will probably have downloadable WMA maps. If you plan to hunt national forest land, the headquarters office of that forest will have maps.

Don’t: Rely too heavily on the information superhighway. Eventually, you need to pick up the phone and actually talk to somebody. Email isn’t well suited for that, as it’s too easy for the person on the other end to blow you off. You want to talk to the state’s turkey program coordinator but also get in touch with one or more of the on-the-ground biologists in the area. Be specific with your questions. Instead of, “Tell me about turkey hunting in your area,” ask things such as, “Can you give me any information on where hunting pressure is likely to be lower?” Be brief and specific. Have your questions written down ahead of time. The guy you’re talking to has a lot more on his plate than feeding information to a stranger, but you’ll find a cooperative audience if you show you’re trying not to waste his time.

Do: Resist the almost overwhelming urge to try to pack too much into your trip. It’s easy to sit by the fire and dream about hitting five states in 14 days, but that’s not so easy in real life. If you’ve blocked out two weeks, hunting three states or areas is about the max you’ll be able to handle. Two places would be better. Unless you’re using guides or outfitters — nothing wrong with that, but it’s not really what we’re talking about — it will take you a day or two to get oriented in a new place. Few things are more frustrating than having to pack up and leave a place about the time you’re getting a handle on things.

Don’t: Neglect to pack for all exigencies. Spring weather is iffy, no mater where you are. Waking up with snow on the ground is a poor start to the day when the heaviest clothing you brought includes T-shirts and thin long sleeves. The reverse is also true: An 85-degree day will be miserable if you don’t have anything but heavy camo to wear. Get a bigger duffel bag. Pack both. Ditto with your footwear. If you hunt Florida in the same boots you wear in the Black Hills, you’ll regret it.

Do: Check into the possibility of finding private land to hunt, even if you don’t know anybody in the area you’re visiting. Surprisingly, many landowners (particularly in the West and Upper Midwest, where turkeys often winter in people’s yards and feedlots) consider turkeys a nuisance. Visiting hunters who present themselves politely and properly can sometimes get permission to hunt. Offering a reasonable access fee can often seal the deal.

Don’t: Pass up the possibility of finding other turkey hunters in your areas of interest. Try to find someone willing to swap hunts. Public land or private, this is a good way to solve that perpetual problem of getting oriented in a new place. Fortunately, with the abundance of online turkey forums, from Facebook groups to hosted forums such as Gobbler Nation, Turkeyhuntingchat, Old Gobbler and more, these back-scratching arrangements aren’t too difficult to find. They sometimes develop into lasting and mutually beneficial friendships.

Do: Check and double-check for special (read: oddball) regulations in the states you’ll visit. For example, every state seems to have its own ideas about the proper loads, shot sizes and gauges suitable for turkeys. Check before you go. Also look for tagging/checking requirements. They’re different for almost every state, and pleading ignorance won’t get you far with the local wildlife officers. Legal shooting hours? Better check that, too, because you wouldn’t believe the differences from state to state. Assuming you’re lucky enough, can you shoot more than one gobbler per day? Yes or no, depending on where you are. Do you have to plug your gun? Same answer. You’d better know these things up front.

Don’t: Ignore the personality differences of the various subspecies if you’re traveling outside your region for a Slam. Turkeys are turkeys wherever you find them, and there are no hard-and-fast rules, but subspecies differences exist. If you use the aggressive run-and-gun tactics that work on Nebraska Merriam’s on hard-pressured Pennsylvania Easterns, you’ll probably regret it.

Do: Make plans for dealing with the meat of the turkeys you plan to kill during this two-week outing. If you tag a bird on the first day, you might have a storage problem. If you’re camping, no big deal. Just eat him. But staying in a motel might be problematic. It’s not horribly difficult to address, and there are many possible solutions. But you need to plan for it ahead of time.

And the final don’t: Don’t put this stuff off. If you want to make a turkey safari this spring and haven’t already taken care of most of these chores, you’re already seriously behind the eight. That doesn’t mean you can’t put together a successful turkey trip on short notice, but the odds are against you.