The first gobbles of a spring morning stir many reactions, but I never suspected that included time warps. Yet sitting on a Missouri ridge during a brilliant April 2019 morning, I wondered if I’d slipped back 20 years.

To be fair, the first bird hadn’t prompted much more than the usual excitement of a morning hunt. But the next six or seven gobblers made me chuckle under my facemask as I silently relived the glory days of Show-Me State turkey hunting. It seemed like a throwback spring, and I had a front-row seat. 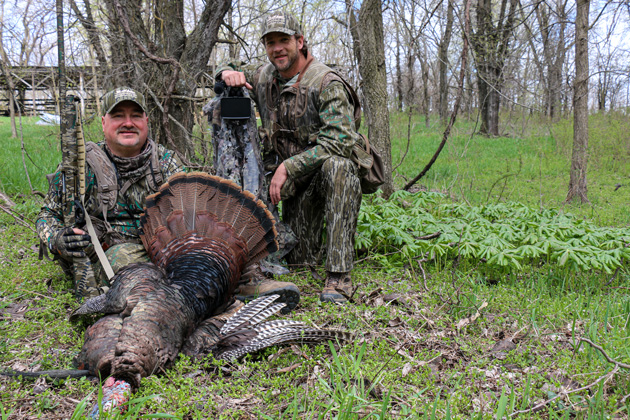 “Bird numbers look really good this year,” Stoltz said that evening. “I’m seeing turkeys in places I haven’t seen them for a while, and that’s a good sign.”

That comment required some perspective. I’ve hunted Missouri with Stoltz every spring but one since 1997 and might have experienced the pinnacle of the state’s legendary opportunities. During the mid-to late ’90s, Missouri was unquestionably the No. 1 destination for Easterns, and it wasn’t uncommon to hear a dozen or more longbeards sound off before dawn from a timbered ditch. Missouri turkey hunting has remained good since, but wet spring weather and resulting bad hatches several years caused some fluctuations in the turkey population, and northern Missouri seemingly never quite approached the mind-boggling heights of its heyday.

But we weren’t pondering that the evening before our hunt. Instead, Stoltz laid out his game plan. Three gobblers had roosted on a steep hardwood hillside at a familiar farm, and we’d slip close to them in the dark, and then hopefully call them up the ridge to our setup. 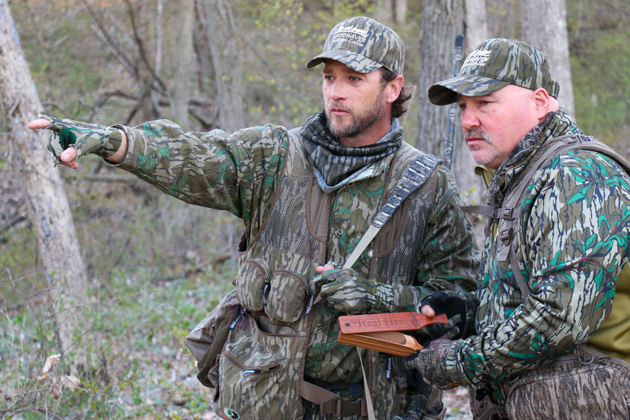 Dawn broke cloudy the next morning, and we were already in place. Stoltz set two decoys on the road, and we nestled into some nearby cedars. On cue, the birds began gobbling, first on their own and then to Stoltz’s quiet tree talk. And before we could enjoy much of the show, they flew down and were on the way.

Soon, a surprise gobble shattered the calm, and soft footfalls crunched behind us. Drumming drifted through the heavy air, and my fingers tightened around the shotgun’s forend. Seconds later, a gobbler emerged from the dark woods, and two more followed, their necks craning to see the hen. Maybe they saw us, or perhaps they instinctively smelled a rat, but their body language indicated they wouldn’t stick around.

Pitman, filming the action from behind, urged me to shoot, but I had to navigate a previously unseen branch by my barrel. I eased my gun left, and the startled birds rubber-necked for the tree line. The trailing gobbler stopped momentarily, however, and I fired, ending the hunt. Seconds later, I retrieved the still-flopping longbeard, capping a brief but memorable hunt — another chapter in a long book of Missouri memories. 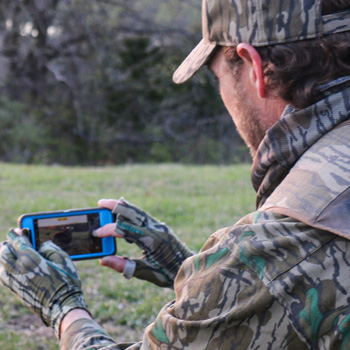 With a bird in the truck, we set out to find Stoltz a gobbler. He immediately struck a bird in the bottoms below the ridge and worked into position. The turkey seemed to be coming at one point but eventually faded off. Two more quick setup attempts netted the same results, so we hit the road.

By then, the wind had picked up, and our efforts to locate a turkey fell flat. But along our travels, Stoltz also reconnected with a landowner with whom he’d hunted years earlier. And with permission granted anew, we had a fresh strategy for the morning.

False daylight already illuminated the horizon on day No. 2 as we slipped into a tree line and got ready. Stoltz had roosted a few turkeys nearby the previous evening, and we didn’t want to risk crossing too much open ground before dawn.

Before long, a throaty gobble erupted from the trees to the south. The bird was fairly close, and he seemed hot. Other turkeys joined in — two or three directly behind us and another six or seven beyond them. Soon, they were gobbling back and forth in shock-wave fashion, and Stoltz could barely get a tree yelp in edgewise. 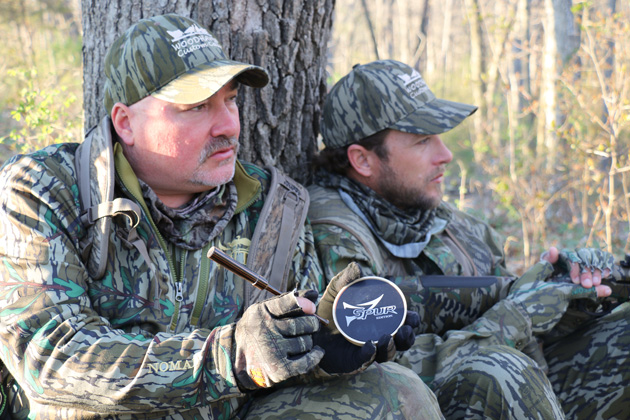 As flydown neared, gobbling waned, and we soon heard the initial turkey sail to the ground behind the trees. Stoltz’s first yelps brought an instant response, but the longbeard then clammed up, only gobbling at every few series. It soon became obvious the gobbler was strutting for a hen in a small field just out of sight.

Stoltz and Pitman called intermittently at the bird, keeping us in the game for almost an hour. Ultimately, however, the turkey faded off, and sunlight burned bright on the landscape.

“Well, time to go find one,” Stoltz said, pulling down his facemask. “It seems like most of them worked east, so I guess we’ll head that way.”

Using sparse tree lines for cover in the open pasture country, Stoltz eased along, glassing ahead often and calling now and then. Nothing responded, and we eventually reached a fence line bordering thick timber. Stoltz pondered setting up near an open point but decided instead to work along the fence, trying to prompt a gobble. 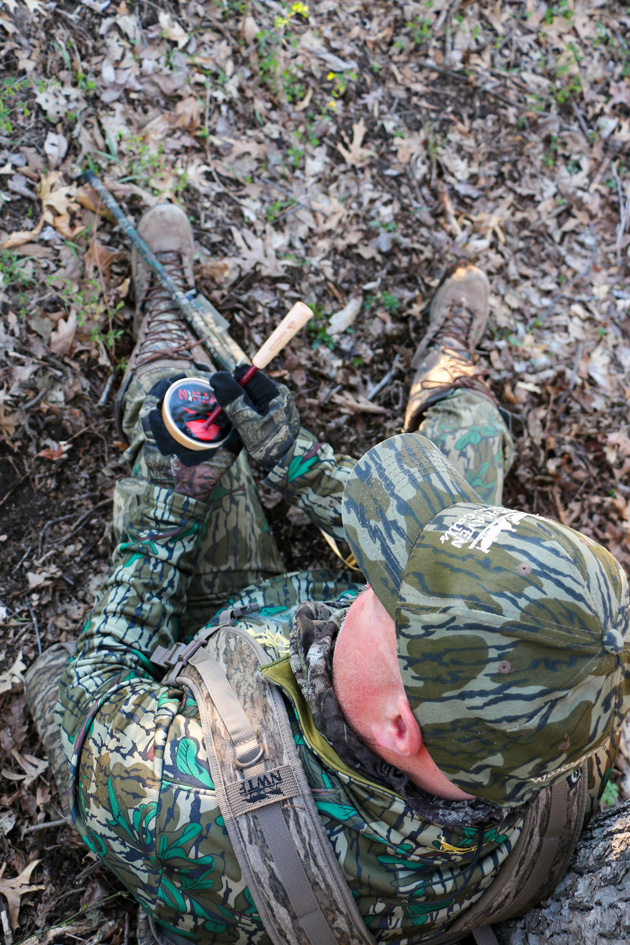 And after a bit, it worked. Actually, we were walking back north along the fence when a distant gobble erupted from the woods. Another soon followed, and Stoltz was in business. He and Pitman slipped into the woods to intercept the bird while I stayed behind. The hunt was a two-man job, and I’d only hurt their chances by tagging along.

With nothing to do, I found a sunny spot in the grass and leaned against the fence, listening to the hunt play out below. Now and then, I heard Stoltz call and listened as the gobbler — obviously closing the distance — responded. Within minutes, the turkey got fired up and started moving swiftly. Then, all went silent, and I anticipated a shot.

A minute passed. And then another. What was happening? Finally, the report echoed through the air, and I breathed a sigh of relief. Fifteen minutes later, Stoltz and Pitman emerged with a long-spurred gobbler. Two birds had come in, but Stoltz had to wait for a good shot as the turkeys crisscrossed through thick cover. But the tense moments had proven more than worthwhile.

The next day, I hit the road as Stoltz and Pitman went in search of another gobbler. With astounding turkey numbers and thrilling action, our hunt had seemed just like the late-1990s outings on which I’d cut my teeth two decades earlier. I realized we probably couldn’t expect that experience every spring, but it provided a deeper appreciation of all I’d witnessed. Moreover, the basic tactics we’d used during our hunt — scouting, woodsmanship and common-sense calling — reinforced those early core lessons I’d received in northern Missouri’s hills and hollows.

I wasn’t surprised when the text arrived later that morning. Stoltz and Pitman had experienced another bang-up morning, resulting in a memorable longbeard for Pitman. I responded with congratulations and silently looked ahead to spring 2020.

Yeah, those bygone Missouri hunts had been great. But with 2019 fresh on my mind, I suspected the good old days were still present. 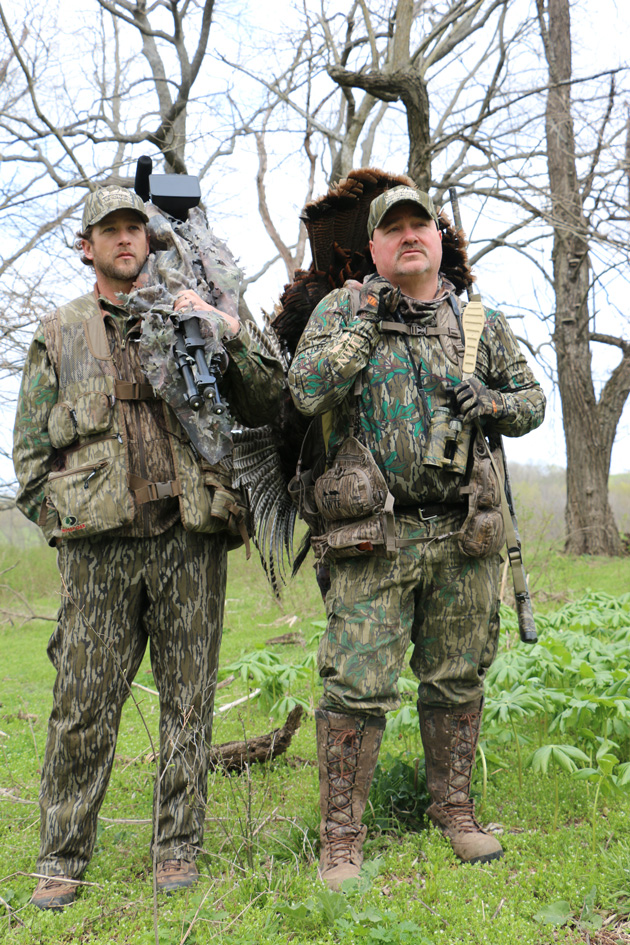