More than a Thanksgiving harvest

Steph Seda is providing an extra special Thanksgiving for her family this year, as she and her children, ages two, five and seven, will be eating a turkey they recently harvested together.

“I had taken my kids last year, and we didn’t get anything because I kind of screwed up there [laughs]. I was so committed in teaching my children how to sneak and be quiet; I forgot the most important thing, to put a shell in the chamber! Definitely a laughable moment on my part as a mom.”

Not wanting to let her kids down again, and also knowing where the turkey were, she decided to take her kids hunting again to see what would happen.

Harvesting a wild turkey for Thanksgiving was only a fraction of Steph’s reasoning for taking her kids out.

“The biggest thing for me is that I don’t want my kids growing up in front of a TV screen or with a phone in their hands,” said Steph. “I want them to see and do things in real life, you know?”

Once the group got in the field, Steph put her kids where they would be safe, but also able to see her shoot a bird. She nestled her kids at the base of a giant cedar tree surrounded by some smaller trees and told them to be as quiet as possible.

“I told them they had to be quiet, and, if not, the turkeys were going to move. And, trying to tell that to a two-and-a-half-year-old isn’t always going to work. My oldest two were good. As I was approaching the turkeys, I suddenly heard my youngest let out a wail,” said Steph. “I walked back and he was throwing a fit because mom was gone.”

The turkeys moved after they heard Steph’s son wail, so she had to reconvene. Steph got the big sisters to keep their little brother occupied so she could try again.

Before long, she got another chance. “The turkeys were walking right towards me, and I could see my kids to the left. I was like ‘alright Stephanie, you have to get a turkey for these kids because we are working way too hard here [laughs].’ I ended up crawling up the hill, and the turkeys had no idea I was there. I sat up and they noticed me. I shot twice and killed two turkeys.” 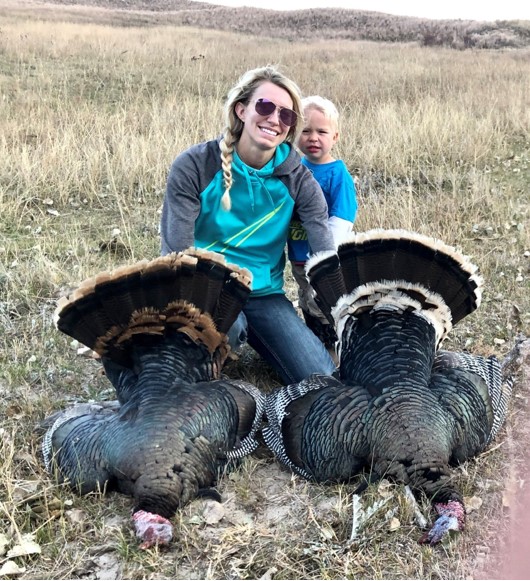 “We took pictures, and the kids were all excited and felt like they were on top of the world because of something that they were a part of.”

Stephanie showed her kids how to pluck and clean a turkey. Steph also showed her children how to cook the edible portions of the bird typically discarded — heart, liver and gizzard. These are lessons Steph finds essential for her kids to learn. 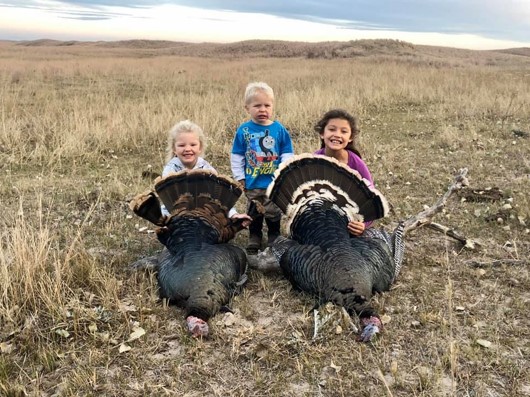 “As far I am concerned, children should see the harvest of an animal to see a more natural way of life.”

While providing her family with a delicious wild turkey on Thanksgiving Day is an added bonus, providing her children a life lesson they will carry forward is something for which Steph is thankful.