For many of us, the outdoors is a family heirloom — a gift passed down to us. There are lessons, legends, skills and traditions passed on to each other. And, perhaps the best of all, there are stories — stories that are so great that they become heirlooms of their own.

My hunting adventures started as a kid. My dad was an avid outdoorsman and taught my mother, me and my siblings to deer hunt. I’ve always enjoyed hearing what everyone saw when we met up; you know the stories. I’m now in my 40s, and I didn’t realize it at the time, but those moments would become some of my fondest memories with my family. I lost my parents to cancer when I was in my 20s, but their stories are still being told and new heirlooms are being created.

My siblings and I continued to hunt after losing our parents, but I would soon take on a new passion. One day I was watching turkey hunting on television with my son Bryce, who was 6 at the time. He tells me he would like to go turkey hunting. My mind instantly went back to missed opportunities with my dad. He enjoyed turkey hunting, but I never went with him. I could have learned so much from him, but when my son asked me to go, I remember thinking, how could it be exciting to see a turkey? There’s no way it could compare to seeing a big whitetail in the woods. I would soon learn how wrong I was.

I started reading about turkey hunting, bought a couple of turkey calls, a blind and got my dad’s old shotgun out. We set up the blind a few weeks before season and practiced shooting. Opening day was finally here. We used my dad’s owl call as we walked to the blind, and we could hear a couple of toms in the distance. Bryce wanted to do most of the calling and did so using a box call he had been practicing on. We had a gobbler making its way to us, but then it got quiet. He hit the call a few more times and nothing. We waited awhile and Bryce became fidgety, asking if he could unzip the back of the blind to look behind us. We had discussed how good a turkey’s eyesight is, but I wanted him to have fun, so he’d want to come back. Peaking through a partially unzipped blind, he said, “Wow, look at all the beautiful colors.” The sun beams shining between the trees, purple wildflowers growing and a once-brown landscape coming alive in the spring. My eyes became watery. I remember thinking, he gets it. This is what it’s all about, enjoying God’s creations. If you’re able to harvest an animal, that’s just a bonus.

After a few hours in the blind, we headed in the direction where we last heard a gobble and got another response. The gobbler closed the gap to about 80 yards but wouldn’t commit. He eventually left and it was time to head out of the woods. Naturally, turkey hunting came with a learning curve. We had multiple encounters like this one. It took us five springs before harvesting his first turkey. Purchasing nicer decoys turned out to be the game changer. Bryce called three jakes in, he took his time, steadied his shot and we felt like we had hit the lottery. He hit his target and the flopping began.

Two years later, Bryce is after a tom. It’s cold, foggy and rainy, but we’re headed to the woods anyway. We make our way to the blind, and he starts calling. No response. It was a long, silent morning, and we’re cold (30 degrees) and frustrated. My back is hurting so I stand to stretch, Bryce does the same. As soon as he stretches, we hear a thunderous gobble to the left of the blind, only a few feet away, so loud that it’s as if we could feel it in our chests. They snuck in without a sound, the rain on the leaves gave them the advantage. We quickly sat and I scrambled to get the camera equipment on. Bryce reached for his gun. Both birds came charging in after seeing our decoys and then fanned out. One was drumming, and they were crossing back and forth behind each other while eyeing the fake birds. They’re putting on a show, strutting and trying to decide if they should attack the decoys. In West Virginia, you can harvest a total of two bearded turkeys in the spring but only one in a day. Bryce lined up the bead on the head of one, and the other one would walk behind it so he would have to wait to take his shot. This went on for what felt like an eternity but was only a few minutes. He had to lower his gun a couple of times because he held it up so long his arm would start shaking. He raised his gun up again, and I tell him, “When you’re ready, take your shot, buddy.” He replied, “I’m not trying to get collateral damage.”

I know he’s right, that he needs to make sure he doesn’t hit the other one, but I’m also thinking that seven years have led up to this very moment. Then all I hear is boom. The tom goes down and doesn’t even flop. The 20 gauge did the job! 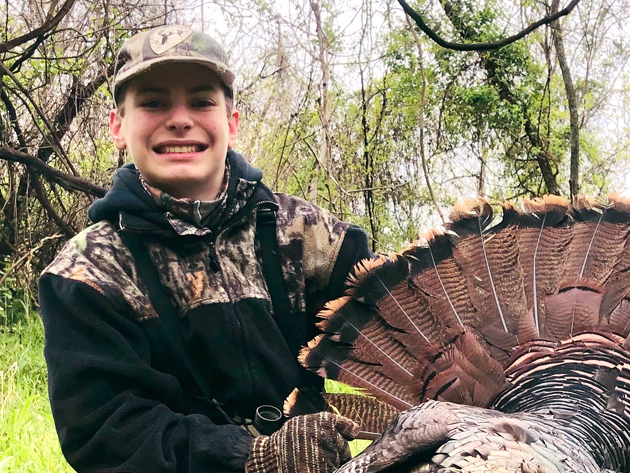 Bryce immediately gives me a high-five and says, “I got him!” He takes a deep breath and I can see his exhale in the cold brisk air; we are both shaking and in shock. We walk up to the turkey and can’t believe our eyes; it had a beautiful paintbrush beard that measured 12½ inches. Bryce is 13 years old and it took us seven seasons to get his first tom, but, boy, was it a dandy. This is a memory I will never forget, one of those heirlooms that will be passed on for generations to come