Vocalizations are an important part of the wild turkey sensory world. Turkeys communicate a lot by sound.

In hunting the wild turkey, hunters tend to remember those exciting hunts with lots of vocal interactions. When you get in his head, he gobbles at every turkey sound you emit. It’s as if you have him on a string. Those are hunts to remember. More often, though, things don’t work out that way. There are some situations where to up your odds of success you have to just shut up.

Turkeys are social animals and interact a lot vocally. But there are times in turkey hunting when silence is in order. A couple of hunts illustrate. Years ago, I had set up in a strip of oaks bordering a pasture in the afternoon. In the pasture was a gobbler with a harem of about eight hens. When I would yelp, he would strut to his harem, but I couldn’t pry him away from that sexy bunch. Behind me was a stand of mature pines that I thought they may head to for roost. The hens meandered toward me with the gobbler in tow. As they approached, I’m thinking he is keyed on them. If I call, I’ll get the attention of two to 16 hen eyes, and I’ll be hard-pressed to remain undetected. So, I let that scenario play out and lucked out with an Alabama gobbler. I think in that situation, calling would have diminished my chances of success.

Another hunt I remember vividly. I had bought a small tract of land with turkeys in Louisiana. On my game camera, one gobbler stood out — long brush beard, nice spurs. We dubbed him “Big Boy,” and he was the alpha of my woods. One spring day, rain dominated the morning, but the cold front pushed through mid-day, and I decided to go turkey hunting.

My property was a quarter-mile across a rice field from the log deck where I parked. When I got out of my truck, I got my binoculars and glassed the woods edge adjacent the rice field. Low and behold, Big Boy was with his harem of about a dozen hens. I quickly developed my plan. The flock was on the woods road and edge of the rice field. They seemed to be slowly meandering south toward a big stretch of woods with big wolf loblolly pines in which they sometimes roosted. I snuck around to the juncture of my woods, the rice field and the big woods, where I sometimes saw hen tracks and gobbler tracks bisecting strut marks.

Patience is not one of my best traits, but that is what I employed. I sat up. The flock was slowly coming my way feeding in the rice field and on the Kentucky bluegrass that sprouted along the woods road. He strutted mostly, but fed on the bluegrass, too. I must have checked my safety a hundred times.

As they approached, I envisioned they would pass by me, but there were too many eyes; I don’t want all those eyes looking for that sassy hen intruder. I let them come and stay silent. They get close, and my biggest challenge is not to shoot the hens. My gun is on my knee. Finally, he separated enough, and I putted on my diaphragm. The gobbler raised his periscope up, and I shot. Pandemonium ensued, the air filled with flying turkeys. I saw flopping, but in my haste to get to the bird, I jump into a small creek separating us. There lay Big Boy, 1 ounce shy of 22 pounds with a 12-inch beard, 1¼-inch spurs and registering a score of 70 in the NWTF Wild Turkey Records. I only called one time, and that was to get him to raise his head. Knowledge of turkey habits paid “big boy” dividends. Keeping quiet worked.

If I’m hunting unpressured gobblers, particularly Western subspecies, or gobblers mildly interested, I call aggressively. I try to keep them engaged with lively banter, fastening their fickle mind on what should be the hen of their dreams.

But if you have the proverbial “gobbler on a string,” vocal restraint is in order. Sometimes you can intrude into a gobbler’s head. He loves what you say. Cuts you off with his gobbles. Double gobbles. Closes the distance with every gobble. It’s exciting to hear it rain thunder, but you don’t improve the situation with loud calling when he is close. Just shut up and get ready.

I sometimes hunt open burned longleaf pine habitat. Years ago, I learned this lesson. Turkeys have good eyesight. I would get a gobbler to gobble and come toward me, but when I would call to him at a long distance with him in sight, he would gobble to me and strut. Then he would look for the hen and hang up trolling and strutting. Now I try to set up where I can shoot him when I can see him, but not in a thicket that they usually avoid. Also, a decoy may help entice him.

Public land hunting is another situation where less calling can be good. Every time he gobbles, other hunters can hear and respond. With lots of hunting pressure, gobblers hear lots of calling and can get call shy. Soft clucks and purrs, with long silent intervals, may be more productive.

Patience is often lacking in turkey hunters. Sometimes gobblers gobble and hustle in. Other times, they just take their time. Even though you don’t hear gobbles, it doesn’t mean he isn’t meandering in. Also, often they won’t take the time to gobble when they are moving toward the hen calling. Listen for drumming, the most exciting sound in the world.

Calling often is effective in enticing long beards, but sometimes you have to adjust to the situation. Be a hunter. Mum can sometimes be an effective strategy for closing the deal. 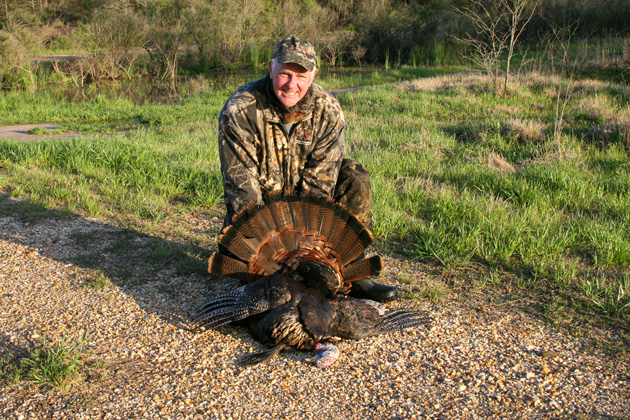