I first started hunting around the age of 16 with a bow. Hunting was all that was on my mind year-round. One thing I always wanted to do was turkey hunt. Opportunity seemed to never present itself. Still, the thrill of turkey hunting remained on my bucket list.

Many years ago, I joined the NWTF and was active in our local chapter, even though I was not an official turkey hunter quite yet. I constantly asked other members if they had time to take me turkey hunting but had no success. A few years later, this particular chapter fell apart and dissolved.

In 2001, I was severely injured in a training exercise with the National Guard, just 11 days prior to my company shipping out to Iraq. I suffered a back injury that cost me my career in the military, as a firefighter and carpenter, as well as my love of bowhunting deer.

I thought my dreams were crushed. I knew I would never spend time in a tree stand, but something always kept my drive to learn how to turkey hunt alive. After 18 years of not hunting, I decided to take a peek at the NWTF website. I found myself watching videos of turkey hunting. I thought to myself, “There has to be a way to get back into hunting.”

As I read story after story on the NWTF website, I knew what I had to do; rejoin the NWTF and find a local chapter! I did some research and talked with Shawn Jenkins, Iowa NWTF regional director, on Facebook. He gave me a list of neighboring chapters, and I contacted the Smokey Hollow Fan Club in Albia, Iowa. I reached out to the committee and joined immediately.

It wasn’t until attending a few meetings and helping with their annual banquet that I realized this small group was something special. More than that, two of the members, Jarrod George and Andy Wuebker, told me they would teach me what I needed to learn to become a successful turkey hunter.

Suddenly, everything started to fall into place and I realized I needed a shotgun, hunting clothes, a turkey vest, turkey calls and hunting boots. I was going to become a turkey hunter at 52 years old!

Like other hunts, this was one of those nights that I could not sleep. The anticipation of my first turkey hunting experience was on my mind, and I could feel the adrenalin pumping through my veins. The weather was also on my mind, as an April winter storm was brewing. Needless to say, I was able to get a couple of hours sleep in before my alarm went off at 3 a.m.

I opened the garage door to warm up the truck and there it was … snow, a lot of it. I traveled 30 miles or so to meet my fellow chapter members, Jarrod and Andy. We discussed the plan then made our way to the field where we would set up blinds. We struck out the first day, but the adrenalin was real, and I was quickly becoming hooked on hunting wild turkeys.

Listening to Jarrod hit the locator call and the music he made calling turkeys was absolutely cool! Immediately we were getting responses back; a gobble here, a gobble there ... I was in awe. All of a sudden, a tap on the arm by Andy, followed by “I see a hen” and a few minutes later “there’s a tom.” I swear my heart rate jumped about 30 beats per minute. We spotted a tom struttin’ his stuff about 200 yards away. We heard gobbles and hens cackling all around us, but they didn’t want to cooperate. The next day would bring another zero-dark-thirty extravaganza and I couldn’t wait.

Jarrod and I didn’t fare as well on day two, though. A neighbor’s boxer decided to ruin our day by running onto the property we were hunting.

On day three, Andy and I didn’t quite make it early enough to get to our planned spot without getting busted by turkeys, who were already extremely vocal from their roosts. We doubled back and set up in a hurry on the opposite side of the creek. The turkeys were still extremely vocal and were already starting to fly down from their roosts. Andy gave a couple of yelps and we started to hear some drumming across the creek bed in the opposite field. I had goosebumps, and the sound of the drumming stood my hair on end. It was a matter of a few minutes until they spotted our decoys and decided to cross the creek. They came in from behind us and strutted right up to the middle hen decoy. I have seen videos of toms attacking decoys, but that day I witnessed the pecking, flapping wing attacks, and spur-flogging of the decoy.

Andy already had me at the ready with my shotgun and told me which one to shoot. Once the gobbler cleared the decoy and gave me a presentable shot, I slowly squeezed the trigger, and my first turkey was down! The time was 6:57 a.m. on April 19.

I figured the loud roar of the shotgun would have caused the remaining longbeard to streak toward safety. It simply jumped and turned the other direction, took about five to seven steps, then proceeded to about-face and strut right back to the decoy. Andy had his bow pulled back and the bird presented him with an ethical shot. Andy settled his pin and let the arrow fly. The gobbler ran about 15 feet and dropped. We had just completed a double. My turkey had two beards, which we had noticed before the shot. The Lord truly blessed us that day.

This is another example that it’s never too late to learn to turkey hunt. It took me 52 years before I went on my first turkey hunt, and that hunt will remain engrained in my mind for the rest of my life. Check that one off the bucket list! 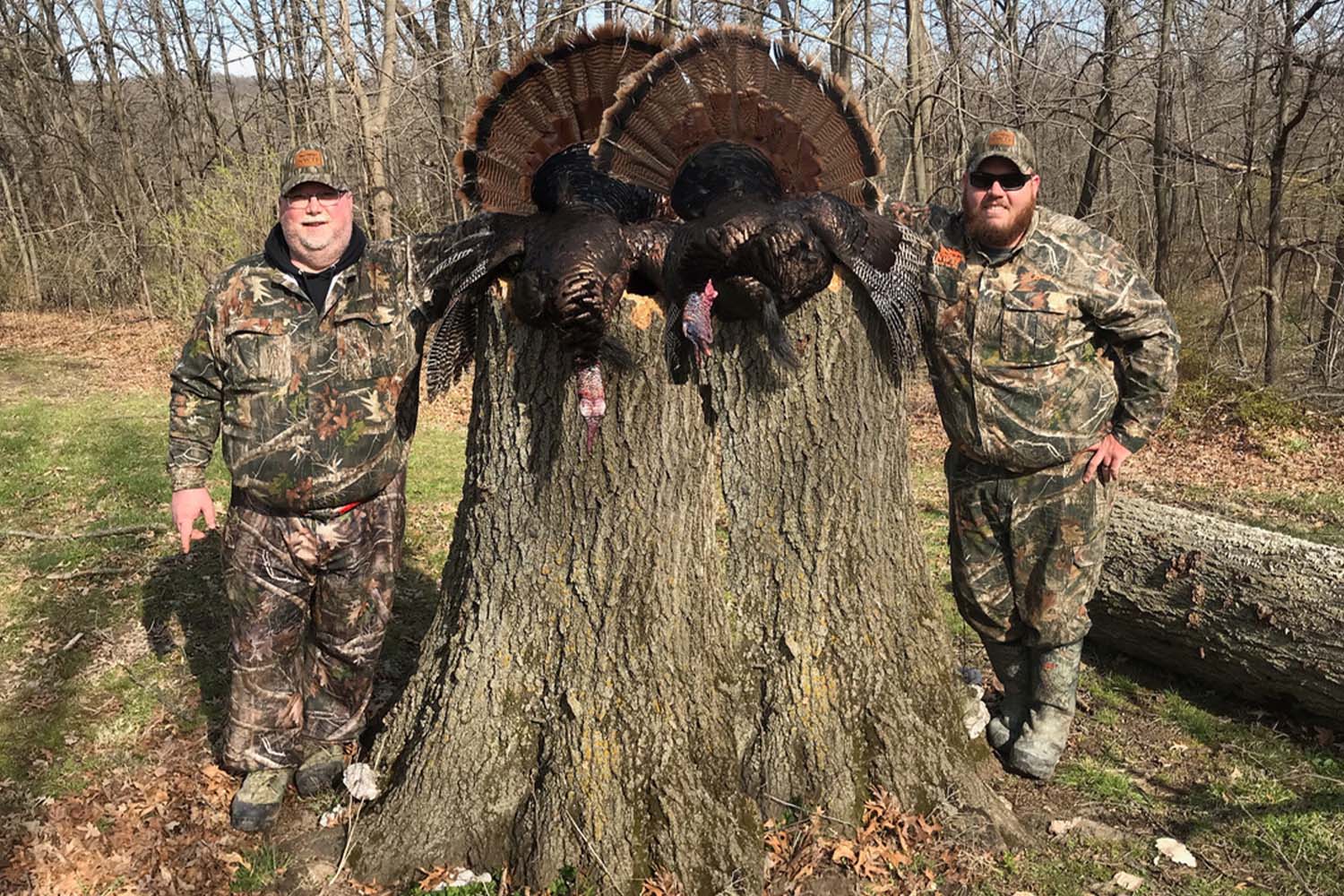 I still have a lot to learn before I will be confident enough to turkey hunt on my own, but I am continuing to learn. God has given us a beautiful landscape to enjoy, and He has given us the elusive wild turkey to hunt and put meat on the table and memories to remember for a lifetime.

I find myself wanting to do more with the NWTF. I want to learn how we can grow our small chapter and help Save the Habitat. Save the Hunt. Our chapter is now working on building our JAKES program for youth hunters and will be taking out our first youth in 2022. I plan to film and document that hunt so they have something to look back upon for years to come.