After winning his fourth Earl Mickel Call Maker of the Year Award at the 2020 Grand National Call Making Competition, Timothy J. Oldham Jr. contemplated his future, seriously considering taking a break from the decorative masterpieces for which he was known.

The Newburgh, Indiana, resident sat out the 2021 competition, a COVID-19-impacted event held at NWTF Headquarters in Edgefield, South Carolina. He used the downtime and the traumatic end of a 25-year career with a company that makes race car parts to rethink his direction. He decided to get to work on a decorative division call concept he’d envisioned for several years. The effort paid off, winning Oldham his 5th Mickel award.

“Rattled,” is an incredibly intricate box call featuring a turkey poult atop a log and nearly encircled by an eastern diamondback rattlesnake. The young bird fixates on the upright rattle while the snake’s large head looms ominously behind. Oak leaves and a chicken of the woods mushroom accent the piece.

The more he researched the relationship between rattlesnakes and turkeys, the more convinced he became he wanted to make a call that would tell a story.

“My goal was to carve out something that represents what is going on in nature,” Oldham explained. “I wanted it to look like something pulled off the side of a ridge. The coloration, the patterns in the snake’s scales – it all intrigued me. And I wanted the people looking at it to feel emotion, sorry for the poult.”

Like many of his calls, “Rattled” is carved from tupelo, a wood Oldham favors due to its ready acceptance of carving tools.

Oldham said he wanted to make a call that not only blew people away visually, but also sounded good when you played it. He scored on both points, according to judges.

“A few years ago, the decorative call maker’s calls were getting beat up as ‘art’ and that really bothered me because I’m a call maker first, as well as an artist. I like to put the two together,” Oldham said. “I really focused on getting the sound and the tupelo helps with that because it’s a lighter wood and I can get in there and manipulate it and get a decent turkey out of that call.”

He said contest commissioner Bob Fulcher picked up the call when he first brought it to the contest and started playing it. “He looked up at me and said, ‘Whoa, that thing’s got turkey in it.’ You’d think with a chunk of wood that big, you couldn’t do that,” Oldham said.

Oldham estimates he has 200-plus hours invested in the call. 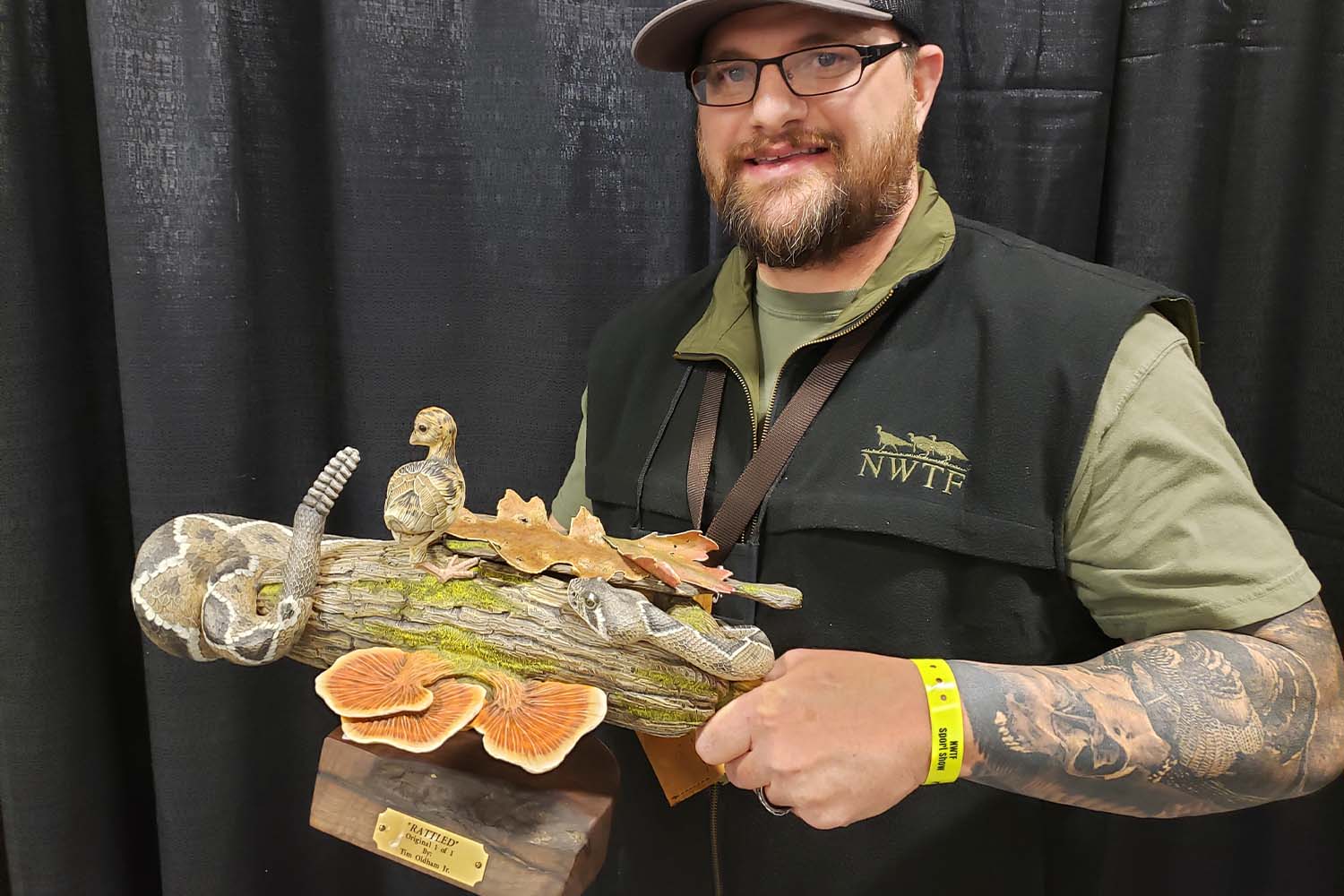 Oldham says he is all in when it comes to future competitions. Call making was always a side gig previously. Once his career situation changed, so did the emphasis on cranking out calls, especially commissioned pieces for clients.

“It really knocked us down,” he said. “We’ve talked about doing this (call making) fulltime but to be honest I likely would have never left my former job with its pay and benefits…but this is my fulltime job now. It’s a full-blown business.”

“It may end up being year-to-year until I find out what’s right for me, but I can’t get away from it just yet,” he said. “Plus, next year is NWTF’s 50th anniversary and I cannot miss that. I will be bringing something special and I know other call makers will also be bringing special pieces, so next year’s competition should be exciting.”

Camaraderie and Collaboration
Fulcher, this year’s competition commissioner, is a past Grand National champion and long-time judge.

“We probably had the best judging team ever this year, with several Grand National champions volunteering to help,” Fulcher said. “The level of quality in the calls comes up every year and this year we had many calls that were truly world-class,” he said.

“Call makers have a great camaraderie, sharing information among each other and, recently, staging call maker workshops for the public where people like myself go in and teach people,” Fulcher added. Fulcher gives attendees at his seminars a template they can take home and use to attempt their own creations.

“We’re sharing information that years ago we never shared,” he said. “We’re like most turkey hunters. We don’t tell everybody where we hunt, where we heard a gobble last night. Call makers were secretive like that for a long time. The help we’ve given each other here, though, had helped accelerate the craftsmanship to all-time highs. It makes it extremely hard to pick winners when almost every call on these tables could qualify as a first-place call.”

“That’s six different human opinions,” Fulcher said. “Everyone has a different hen in their head. When we run a call, if that call has the same sound as the one in our head, that’s the one that stands out.”