Range it, film it, shoot it: Omega II sight does it all

To be completely frank, I was slightly skeptical about the Omega II when I first opened the box, as I guess I am a traditionalist when it comes to sights, and the thought of looking through an LCD screen just seemed unorthodox. However, after mounting the Omega II on my crossbow and realizing the full scope (no pun intended) of the Omega II’s capabilities, I am a believer in the product, not just for hunting practicality, but for a variety of reasons, including teaching beginners, sharing hunts and better understanding distances.

The Omega II is a revolutionary sight that can by mounted on all firearms, crossbows and compound bows and is capable of ranging and sighting objects, as well as the ability to video record in HD. Whether you are the modern hunter wanting to share your harvest on social media or you want to teach a beginner how to shoot, the Omega II’s functionality serves a wide range of hunters. 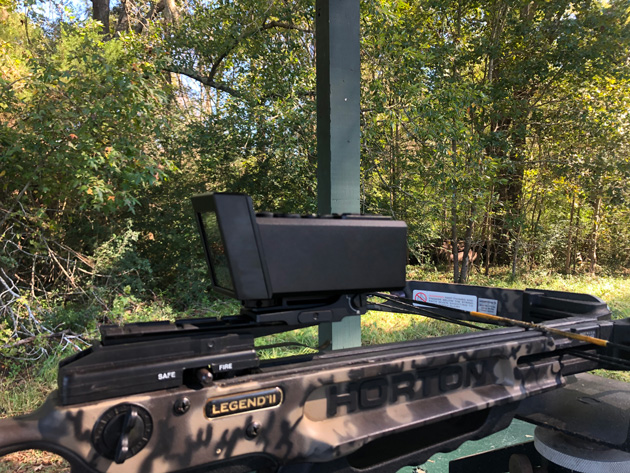 I decided to mount the Omega II onto my Horton Legend II crossbow, which could not have been more seamless. It easily slipped onto the rail and needed only a few turns of a hex key (Allen wrench). If you’re using a compound bow, it comes with everything you would need to mount it, too.

One of the greatest features of the Omega II was how it continuously and accurately ranges objects. Before putting an arrow in my target, I used the Omega II just for ranging, pointing it at objects and then measuring their distance by hand. The Omega II was pinpoint accurate every time. Instead of needing to pull out your range finder to decide which yardage pin to use on a bow or how much to holdover with a rifle, the range finder and reticle are right there to be used simultaneously, cutting down on movement and noise.

This product reaches the next level by opening doors for beginners, as there is no proper form required, and human error is minimized. Because you don’t need to shoulder a firearm or bow in a certain way to view through the scope, you can use the Omega II in multiple positions if needed. As long as your reticle is on target, you’ll be on target. Wanting to test this aspect of the sight, I held the crossbow slightly above my head looking up and into the LCD screen. Once my reticle was on target, I fired and was as close as I usually am at 25 yards. Not that I am eager to take a shot in an unusual position, but on the off chance that you need to, the Omega II allows for it. This is important if you are mentoring a new hunter because you can see what they are seeing. This will not only boost confidence in handling a bow or firearm but also increase the number of ethical shots one takes, too.

Posting on social media or emailing video to a friend, the HD video capability of the Omega II makes sharing your hunt easier, and using the video function on the sight is just as easy. Simply push the record button to start recording, and push it again to stop. The sight also allows for playback, rewinding and fast forwarding. To upload, simply put the micro SD chip into an adapter, then into your computer. 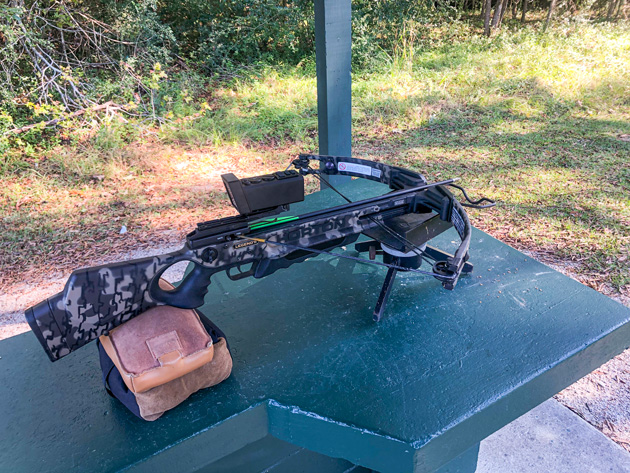 What comes in the box:

It’s safe to say that I am going to leave the Omega II on my crossbow going forward. Though I am not usually the type to share my hunts, if that buck or gobbler decides to stroll in, I can film it simply by pushing a button. The Omega II is innovative when it comes to sight technology, and those willing to step out of the ordinary will be rewarded.