On call with … Kevin Lynch

The two-time Charles L. Jordan winner shares his thoughts on building wild turkey wingbone calls, as well as a few or his favorite memories.

You could say Kevin Lynch accidentally talked his way into being a wingbone call maker. For once, opening his big mouth led to an award-winning adventure among some of the best wild turkey artisans in the country.

Lynch, 58, of Elsmere, Kentucky, and his wife were attending a Ray Eye seminar at the 2012 NWTF Convention and Sport Show in Nashville when Jill Easton, noted Turkey Country contributor and long-time outdoors writer, began a conversation with Lynch’s wife. Through that, Easton learned that Lynch was a call collector, and she inquired about writing an article detailing his keepsakes. Lynch didn’t make calls, mind you, he only collected them, so he had no business offering what came next.

“I told Jill and her husband, Jim Spencer, when you kill a turkey that spring, send me the wings, and I’ll make you a call,” Lynch said. “Why would I tell anybody that, considering I didn’t make wingbone calls?”

Turns out, the decision was a good one. That following spring, without fail, Easton and Spencer sent a turkey wing in the mail to Kentucky. Lynch used a tensioner from Jim Groenier that had been sitting in his closet for about a decade, along with Groenier’s instruction guide, to build his first wingbone call that he had promised. He presented it to the couple in 2013 at the NWTF convention, and it was a hit. 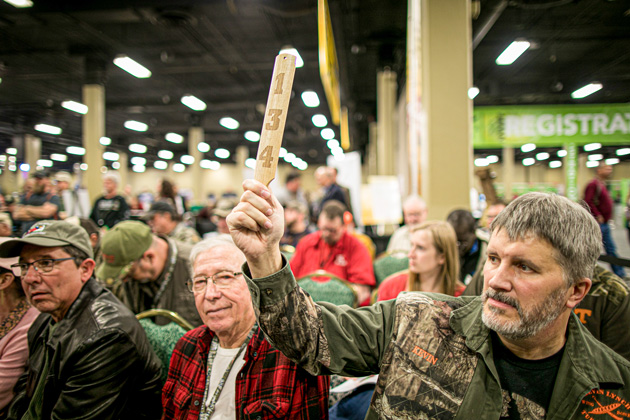 With no experience, Lynch thought he could bring his calls to Nashville and enter them at the convention, but he soon discovered all calls have to be registered, so he waited another year. In 2014, Lynch was named Grand National Callmaking Competition Rookie Call Maker of the Year for his wingbone entry. In 2017 and 2020, he won the Charles L. Jordan Award, given to the best wingbone call maker in the country.

The ’20 award-winner was a three-bone hen call, taken from a female wild turkey, which Lynch says are getting harder and harder to come by in his region because hunters are letting hens walk to improve turkey populations. Lynch feather wraps his calls with an intricate process, but says it’s a quicker application for him than normal thread wrapping of the three bones (radius, ulna and humerus). 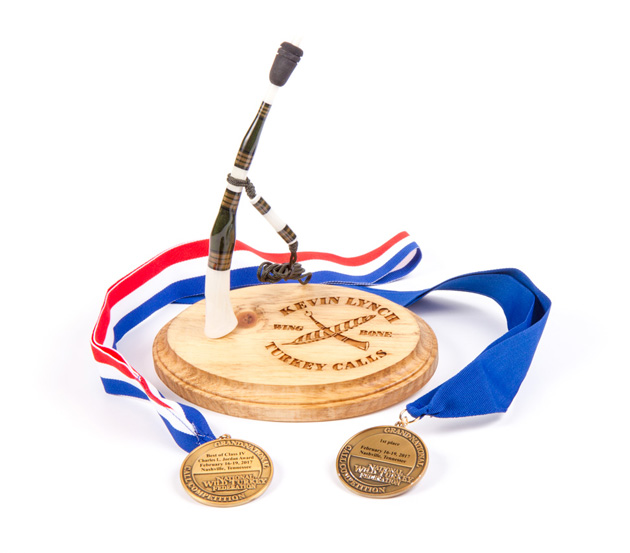 Lynch estimates he’s made nearly 1,100 wingbone calls and donated about 200 to NWTF events and competitions, which have raised nearly $20,000 for conservation efforts and hunting heritage programs since 2014. He’s held call making seminars at the NWTF convention with Kevin Rouse and Chris Rice, and enjoys making wingbone calls at no charge for young hunters after their first harvest, as well as hunters all over the country.

“I get so excited when I ship a call,” he said. “I can’t wait for you to get it. I get just as excited taking a call to the post office as I do getting a call in the mail from another call maker.”

It’s a passion that appears to have no end and continues to grow. In the beginning, Lynch used a candle holder tube to soak a few wingbones at a time in hydrogen peroxide to whiten them for the callmaking process. Now, he uses 5-gallon buckets. His wife has also banned him from boiling bones on the stove after a few mishaps, and he now resorts to a propane turkey fryer outside.

In the end, it’s all about the craftsmanship in the creation and the sound produced as a result.

“No two calls I make are exactly alike because of the inner dimensions of the call,” Lynch said. “Ultimately, sound is the most important quality. It has to play right. We’ve all got that turkey in our head, and when I play it at the house, that’s the turkey I want to hear.”