When Christopher Giummo of Sarasota, Florida, entered a sweepstakes for a guided Wisconsin turkey hunt as he downloaded the GoWild hunting app, he was taking a leap into the unknown. As a hunter, angler, an NWTF member — in addition to being a well pump technician by trade — Giummo is used to uncertain outcomes and getting his hands dirty. What he may not have realized is just how memorable an adventure lay ahead — and how GoWild, the fastest growing social media and activity tracking platform for outdoors enthusiasts, guides hundreds of thousands of users on their own daily outdoor journeys.

GOWILD AND R3: FORGING AHEAD FOR THE FUTURE OF CONSERVATION

GoWild and NWTF are natural partners, given the Federation’s longstanding commitment to hunting heritage and R3 — recruitment, retention, and reactivation of hunters and shooters — and GoWild’s role as a trailblazer in the world of outdoor apps. What makes this partnership even more important is the crossroads where hunters and conservationists now find themselves: North American hunter numbers peaked in the 1990s and have continued to decline ever since, as Baby Boomers age out of what can be a strenuous pursuit. At the same time that hunter numbers are decreasing, the landscape of hunting is changing dramatically, both in the demographics of hunters and in the way they share information.

While earlier generations mostly got information from print sources and gathered at places like taverns and hunting camps to swap stories, younger hunters tend to seek digital ways to share and swap information. This makes sense on a gut level, when you consider that everything from education to shopping to dating can now be done online. Apps like GoWild help the hunting world join the digital age and stay relevant.

According to GoWild Chief Marketing Officer Jen Callahan, herself an avid outdoorswoman: “We want people to think of GoWild before, during and after they are doing something in the outdoors. Whether that’s for finding information or tracking and organizing their own data, GoWild makes it easy and fun. There's also a common mindset within the community, so sharing an outdoor lifestyle like hunting or fishing can be a lot less intimidating than it is on other social platforms.”

Another draw of GoWild is frequent sweepstakes and giveaways. Giummo, 29, was scrolling on social media one evening in early 2019 when he first saw GoWild advertised. The chance to win a hunt made downloading the GoWild app very appealing. That he was able to bring a hunting companion — he chose Jamie Smith, also of Sarasota — sweetened the proposition further. Giummo decided to download the GoWild app.

PERSISTENCE: IN THE WOODS, ON THE LAKE

Different generations may approach outdoor adventures differently, but they are, at the end of the day, after the same thing: quality time in the woods with friends and family, and the hope of bringing some of nature’s bounty to the dinner table. This common bond makes using GoWild a community, almost family, experience, as hunters and anglers share a deep and common bond through their love of the natural world.

Gun cases and camo duffels in hand, Giummo and Smith arrived at the Dane County Regional Airport in Madison, Wisconsin, on May 16. They rented a black Chevy Suburban and drove an hour west into Wisconsin’s hilly Driftless (or unglaciated) country to begin their adventure. It’s interesting to note that wild turkeys were reintroduced to this region some 40 years ago, roughly a century after their extirpation. Thanks to the efforts of the NWTF, the Wisconsin DNR and private landowners, a thriving population of Eastern wild turkeys now exists here — enough, in fact, to make Wisconsin a destination for traveling hunters.

Guide Patrick Kalmerton of Wolfpack Adventures, an outfit specializing in turkey hunting and fishing, met Giummo and Smith at their cabin at Blackhawk Lake Recreation Area. The following morning, the trio trekked through Blackhawk’s hardwoods and hills in search of gobblers. Despite trying a variety of calls, Kalmerton did not locate any talkative birds that morning.

One thing Giummo and Smith did get to experience was hunting Eastern wild turkeys at the southern and (historic) northern extremes of their range. The two were accustomed to private land hunting in the flat pineywoods of Central Florida, while on this morning they got to run and gun on public ground. Steep hills, cold streams, crowing pheasants and flights of Sandhill cranes all added to the experience. There’s something comforting in the e pluribus Unum experienced by hunters. The terrain and species may vary, but the spirit and bond are the same. 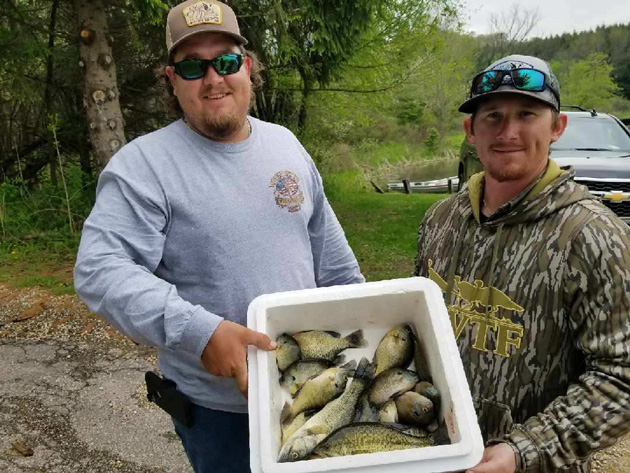 Historic rains and a cold spring had made the birds extremely fickle, according to Kalmerton, who could easily double as a standup comic with a one-liner ready for every occasion. Shifting gears, he guided Giummo and Smith fishing on the next afternoon on Blackhawk Lake. The author of this article plied deadfalls along the shoreline for panfish and walleye; the Florida duo fished bass from a boat provided by Kalmerton. In addition to seeing the northern range of wild turkeys, Giummo and Smith experienced another bounty of spring outdoorsing in the Badger state. You can hunt turkeys in the morning, then chase just about any freshwater fish imaginable in the afternoon.

All four hunters scouted that evening, piling into the Suburban and looking at wary gobblers on a variety of fields that Kalmerton (who lives in the nearby town of Highland) had permission to hunt. A few birds darkened the cut cornfields, but Kalmerton’s instinct was to leave these in reserve and try another morning on public land. Ironically, Kalmerton assessed, large chunks of public land like the 2,000-acre Blackhawk area often hold birds late in the season, whereas choice private fields likely have been pressured.

Kalmerton offered encouragement for the following morning. “Late season birds in Wisconsin are tough,” he told his hunters. “Throw in the rain and cold we’ve had, and that makes it tougher still. Let’s meet at 4:30 tomorrow morning and hit Blackhawk again.”

LIGHTNING, MUSHROOMS AND A TURKEY 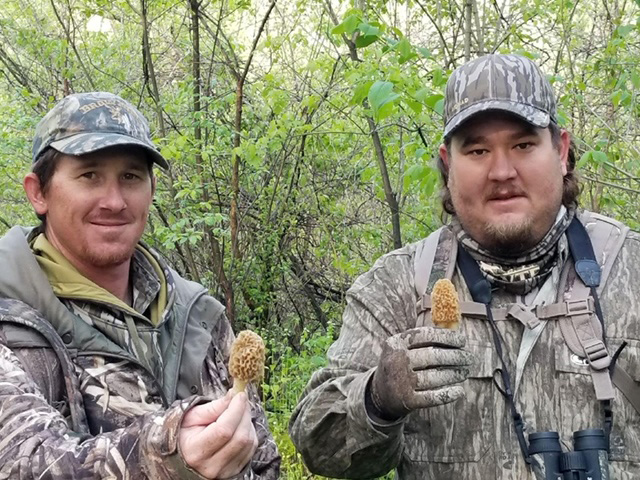 As if on cue, a storm of epic proportion struck that night as the author drove to his hotel —illuminating the surrounding hills and farmland in a strange green — as what seemed like buckets of water fell from above. Storms subsided after midnight, and the intrepid Kalmerton was ready and waiting the following morning. He led the group through knee-deep streams and over bluffs in search of gobblers. Neither his clucks nor puts nor yelps, convincing as they were, drew any interest from Blackhawk’s wary toms.

At mid-morning, finding a handful of morel mushrooms, which the Florida hunters had never seen, helped take the sting out of the lack of turkey talk. A trip to Betsy’s Diner in Highland further salved the group’s consternation. The friendly staff, in true Wisconsin form, cooked up the modest morel find along with heaping plates of steak, eggs, and biscuits and gravy. Still not ready to throw in the towel, Kalmerton was busy spinning strategies on the Formica counter. The evening hunt would be on private land.

After another bout of fishing and a little rest, Giummo and Smith once again set out for the Wisconsin turkey woods. The third time proved to be a charm. At 6:30 p.m., a big tom came strutting into the muddy cornfield following a hen. Smith and Giummo waited in a pop-up blind. Five jakes appeared. Smith left the blind and grabbed a fan that Kalmerton had supplied and drew in the tom, who cut off the jakes on the way to the decoys. Giummo quickly raised his Bennelli Nova and the rest, as they say, is history.

That the 22-pound bird had inch-long spurs and a 10-inch beard adds to the tale. But, as any good sportsman or sportswoman will tell you, it’s not those details that matter. It’s all about the kind of adventure that GoWild made possible: a three-day chase, a 1,400-mile journey, the moment that the big tom turned toward the fan … and, of course, the moment Giummo clicked to download GoWild. 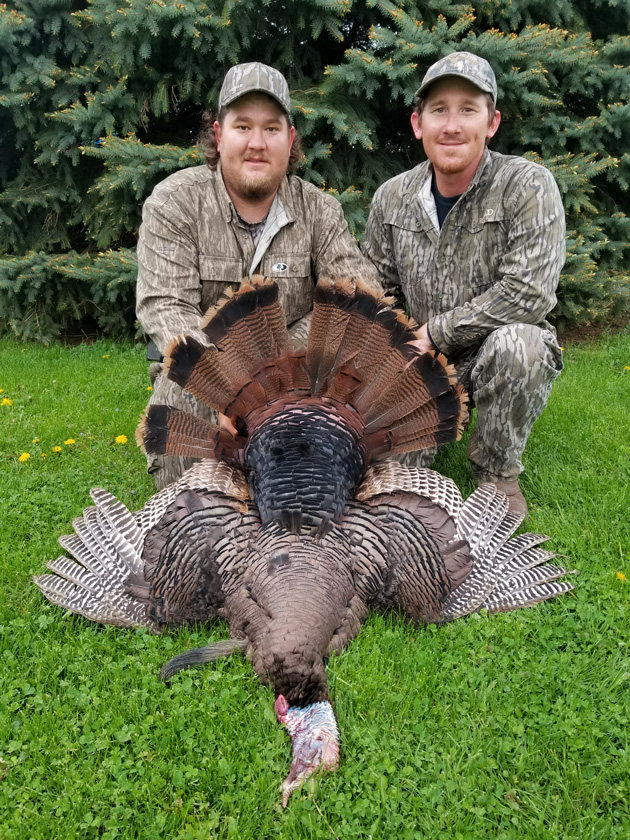 Keep clicking and keep hunting. It’s what the future is all about.