Pack’em up: Rifles to go

Packable takedown rifles in a pinch are a must-have for the outdoor traveler.

No matter where you go, packs are in. There are preppers who always keep a “bug-out bag” handy in their vehicle and at home in the event of a natural or man-made catastrophe. Wilderness survivalists carefully select items for their pack in the event they are lost or stranded in the wild. The backpacker carries enough lightweight, high-tech gear to camp comfortably in the backcountry for days at a time. And wilderness travelers are on the go by bush plane, canoe, boat, dog sled, snowmobile or ATV and carry a pack equipped for almost any emergency. 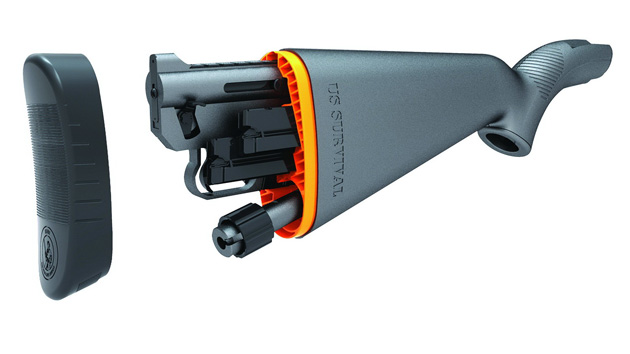 One of the most popular firearms for many of these pack owners is a lightweight, takedown .22 rimfire rifle. The primary purpose for packing these rifles is for subsistence hunting for food in long-term emergencies; however, these same little rifles are also used for plinking and, in a pinch, protection. Since they are shoulder fired, they are more accurate in most shooters’ hands than handguns when every shot counts. Also, it is easy and lightweight to carry a good supply of .22 LR ammo as 133 rounds weighs just 1 pound.

It was the rapidly growing interest in packable rifles that, in part, led Ruger to develop the Model 10/22 Takedown. It is basically the Model 10/22 that Bill Ruger introduced in 1964 but with a well-engineered, simple (after you have done it a few times) means of quickly breaking the 18.5-inch barreled rifle down into two parts with the barrel half being the longest part. This semi-auto weighs only 4 pounds and comes with its own pack with pockets for ammo, ear plugs, etc. If you don’t want to use the pack it comes in, you can break it down, and it will fit into any pack with an 18-inch compartment. As expected, the 10/22 Takedown is accurate, dependable and a lot of rifle in a compact size. A stainless-steel version is available to endure harsh conditions and weather.

If compactness is a major requirement, then you will want to take a hard look at one of the longest running semi-auto packable survival rifles in U.S. history. It is now known as the U.S. Survival AR-7, made by Henry Repeating Arms. The AR-7 was introduced in 1959 as a packable survival rifle for U.S. Air Force pilots. It has flown all over the world in military survival kits and has saved lives.

Over the years, the civilian version AR-7 has been known for its compact size, ease of operation and reliability, and it is still one of the leading rifles to include in survival packs. When broken down into its four component parts, the receiver, barrel and magazine stow in the hollow stock. The stock with components stowed is just 16.5-inches long and weighs 3.5 pounds. The magazine holds eight rounds, and the rifle can be assembled in less than one minute. This is one tough rifle as the stock is made from ABS plastic and the barrel and receiver are coated with a layer of waterproof Teflon. I know of several hardcore coon hunters who swear by the AR-7, and it is the only rifle they carry in their day packs. I have one that is several years old and has been with me on many adventures, and it is still accurate and dependable. It fits into my day pack with ease.

Another well-known old timer still in production is the Marlin Model 70PSS, which breaks down into two components that measure about 16 inches in length. This stainless-steel, semi-auto rifle, once known as the Papoose, features a seven-round clip, synthetic stock, with abbreviated fore-end and 16.25-inch micro-groove barrel, weighs just 3.25 pounds. It comes with a padded, floatable Cordura carrying case. I see the Model 70PSS in many bush plane survival kits, and I was recently on a pack trip for headwater trout and noticed the outfitter had one in his pack. He told of an emergency when he and his elk hunters were snowed in on the mountains for days. They ran out of food, and the Model 70PSS kept them fed with grouse.

There are also a large number of guns available at gun shows and in gun stores and pawn shops that are no longer manufactured but are easy to take down, making them qualify as pack guns. Among these is the M6 Scout. The first version of this all steel, single-shot survival gun was developed back in the late 1950s for U.S. Air Force air crews and was a part of their survival kits. Later civilian versions of the little over and under were offered featuring a .22 LR barrel over a .410 shotgun barrel. Ammo stored in the stock. It has a hinge pin that allows it to be folded or disassembled to a packable length of 18.5 inches. 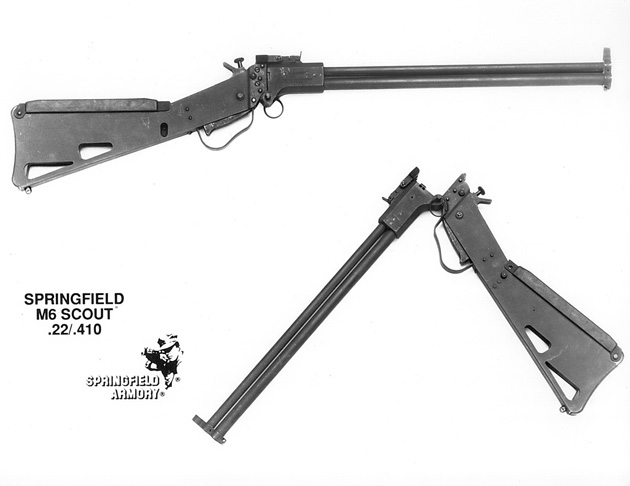 Savage once made a .22 LR over and 20-gauge under that broke down into three pieces — stock/receiver, fore-end and barrel. It was named the Model 24C Camper. It came with a padded case and could be packed in a large backpack.

There are a lot of the older .22 rimfire rifles, such as the Winchester Model 62 and the T/C Contender Carbine, that featured an easy way to break the rifle into two parts for ease of packing or cleaning. By just keeping this feature in mind when shopping for used guns, it is not difficult to find a good used takedown gun that just might fit into your pack. 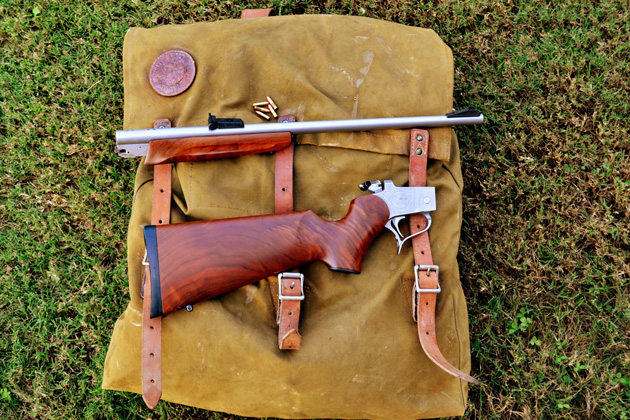 I am aware that there are several shotguns, centerfire rifles, say the AR-15, and even powerful air guns that are packable, but this article is slanted for those interested in the lightweight rimfire rifle and ammo, plus the advantages of low recoil and shot report.

As a growing number of people include a pack of some kind in their must-have gear list — whether it be a bug-out bag, survival kit, hiking day pack, backpack for camping or emergency pack for a watercraft, aircraft or vehicle of some type — packable rimfire rifles are becoming a more sought-after item. Just ask Ruger!