“Every seeming equality conceals a hierarchy.” Mason Cooley was known for his witty sayings, and certainly this saying had absolutely nothing to do with wild turkeys when it was penned. But, for someone with a passion for understanding and appreciating wild turkeys, the quote resonates with me because of the importance of hierarchies in the turkey world. When we look at a flock of wild turkeys, we often see individual birds exhibit dominance behaviors over others, but for the most part, the flocks often appear calm and in order. As Cooley’s quote points out, every equality, or in this case, minute of “order,” conceals a hierarchy. In other words, what seems calm and collected on the surface appears that way because of a hierarchy established well before that flock of turkeys was observed. Wild turkeys have defined social hierarchies, which many people refer to as pecking orders. So, what are these pecking orders, how do they function, and what do they mean to wild turkey populations? 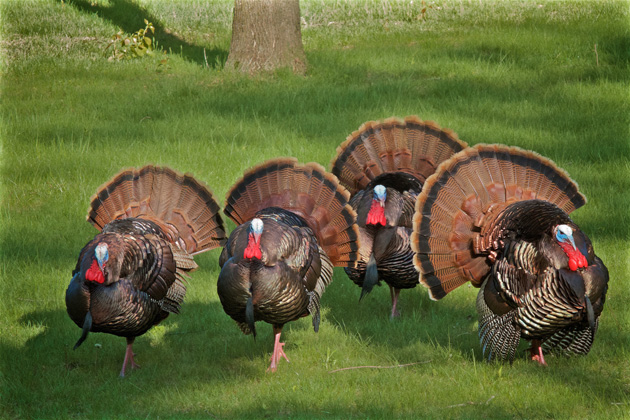 Social dominance and the development of pecking orders are known to influence many aspects of day-to-day life for birds such as wild turkeys. For instance, constraints resulting from pecking orders can alter how much space birds use or which foraging opportunities certain birds get. In other cases, pecking orders can influence spacing among females during nesting and can positively or negatively influence reproductive success. Wild turkeys use a mating system that is loosely referred to as an “exploded lek.”  All this means is, there are pockets of gobblers scattered about the landscape that have small groups of hens interacting with them. Birds that use this type of mating system often show defined social hierarchies (pecking orders) both by males and by females, which is certainly the case with wild turkeys. Many studies on other birds have shown the importance of social hierarchies to female reproduction, but this is a bit of an unknown for wild turkeys. So, how do these pecking orders develop and function in wild turkeys?

Many years ago, research by Dr. C. Robert Watts in south Texas detailed the structure of pecking orders in wild turkeys. More recently, Dr. William Healy described pecking orders for birds he imprinted to himself as part of his detailed work on wild turkey behavior. Collectively, these researchers noted that separate pecking orders exist for both gobblers and hen flocks, and that these pecking orders are stable unless flock members are lost to mortality. The small groups of hens we observe in early spring, once winter flocks have disbanded, have defined pecking orders that were settled during the fall. Likewise, the groups of gobblers we see, often two to four adults hanging around displaying together, are siblings or groups of gobblers raised together by one or more hens.

In other words, these groups of gobblers have spent considerable time together since they were poults, so their pecking order has been well tested and differences have been “ironed out” well before we enjoy seeing them during spring hunting seasons. Within this group of gobblers, there is a dominant bird that sits atop the pecking order, and this bird breeds with hens that spend time with the group of gobblers. Likewise, these groups of gobblers stay together for life, but obviously the size of the groups get smaller as gobblers die from various causes. Ultimately, the “group” ends up being a single gobbler, which all turkey hunters can relate to, as this bird is usually an older bird that is skilled in his ways.

Ben Franklin once noted, “It is the first responsibility of every citizen to question authority.” In the turkey world, individual birds are constantly questioning authority if you will, or testing the pecking order, attempting to establish dominance over other birds. Many turkey hunters have called up multiple gobblers and harvested one, only to see the other birds attack the downed bird. This behavior is a function of the pecking order, and the constraints that it puts on turkeys as they interact with each other. That downed bird is suddenly vulnerable (to put it lightly), so the other gobblers see an opportunity to “beat” that bird and move them down in the pecking order.

Many of us have seen this same behavior with hens; I’ve noticed it often while trapping birds during winter. Dominant hens take their place at the bait laying in front of our nets, and then everyone else fills in around them. Should someone act out of place, well then, they’re about to get put back into their place!  The result is, pecking orders end up shaping the flocks of birds that we enjoy observing and hunting.  Those pecking orders take time to establish, are constantly tested and maintained, and can remain in place for years. So the next time you see a flock of turkeys, take the opportunity to look for the subtle interactions amongst birds, and see if you can tease out who rules the roost and who is looking for the chance to take a step up in the pecking order