Some shooting positions in the spring turkey woods hold an advantage. Here are a few tips to improve your sit.

The Georgia gobbler was strutting just 65 yards in front of me in a woodland opening. I could see him and I was sure he would see me if I moved. This standoff had been going for about 45 minutes, and the sitting position I had taken at the base of a large oak had slipped into a most awkward position. The big Mossberg 835 resting on my knee was no longer in a solid shooting location. I dared not move as the gobbler broke free of his strutting ground and closed the distance. When the bird was about 45 yards away, I lowered my head slowly and got into a most uncomfortable shooting position. I had no choice! 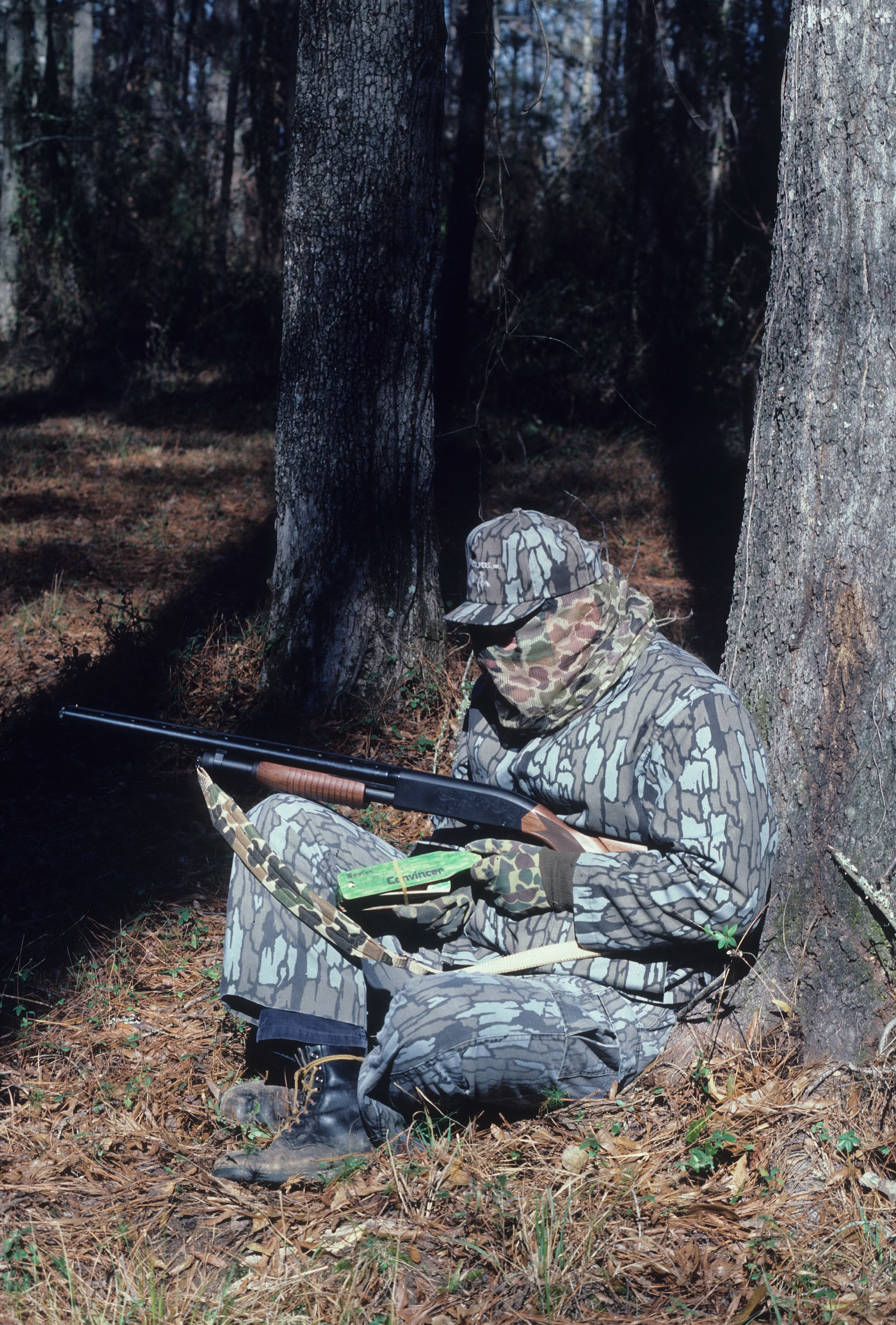 At the report of the shotgun, the recoil from the 3½-inch 12 gauge slammed the receiver against my face and the stock hit my collar bone like a hammer. As my hunting partner, Realtree’s Bill Jordan, who had been doing the calling, ran past me, I asked him if I got the gobbler. Fortunately I did and the morning was a success despite my bad shooting position.

The spring gobbler hunter most often shoots a shotgun from one of the most difficult shooting postures imaginable: a slouching, seated position. He or she usually starts out working a gobbler while seated at the base of a tree. Some hunters sit with their back straight, resting against the tree with their legs outstretched and the gun resting in their lap. This position, while being more comfortable, requires a lot of movement to get into a solid shooting position. Many seasoned turkey hunters sit with one leg somewhat tucked under them and the other leg bent up enough so that the knee is in front with the shotgun receiver bottom resting on the knee. From this position the hunter can move the shotgun into a shooting position with less movement.

For many years this was the position I used, but when a gobbler was slow to come in, the sharp edges of the receiver bottom of the Mag 10 or the 870 left a painful imprint on my knee. Sometimes, it was so uncomfortable I took a chance and repositioned the shotgun. On one occasion in the Sipsey River swamp in Alabama this adjustment cost me a gobbler.

As the hunter calls to the approaching bird, he will often move slightly right or left to be facing the right direction when the bird appears. Often the hunter’s backside will slowly slide away from the tree. When the gobbler finally gets inside shooting range, the hunter’s shooting position is far from being ideal. With open sights, the rear of the gun will often slip almost under the armpit, and when the front bead is placed on the gobbler’s head, the shot will be high.

The solution to this common problem has three parts. The first is to carry and use a shooting rest, bipod or shooting sticks, to rest the shotgun on when setting up. Having this support in front of you can, with practice, keep the shotgun in a ready position with minimum movement. It doesn’t matter how long it takes the gobbler to come in, the shotgun is comfortably in a ready position. 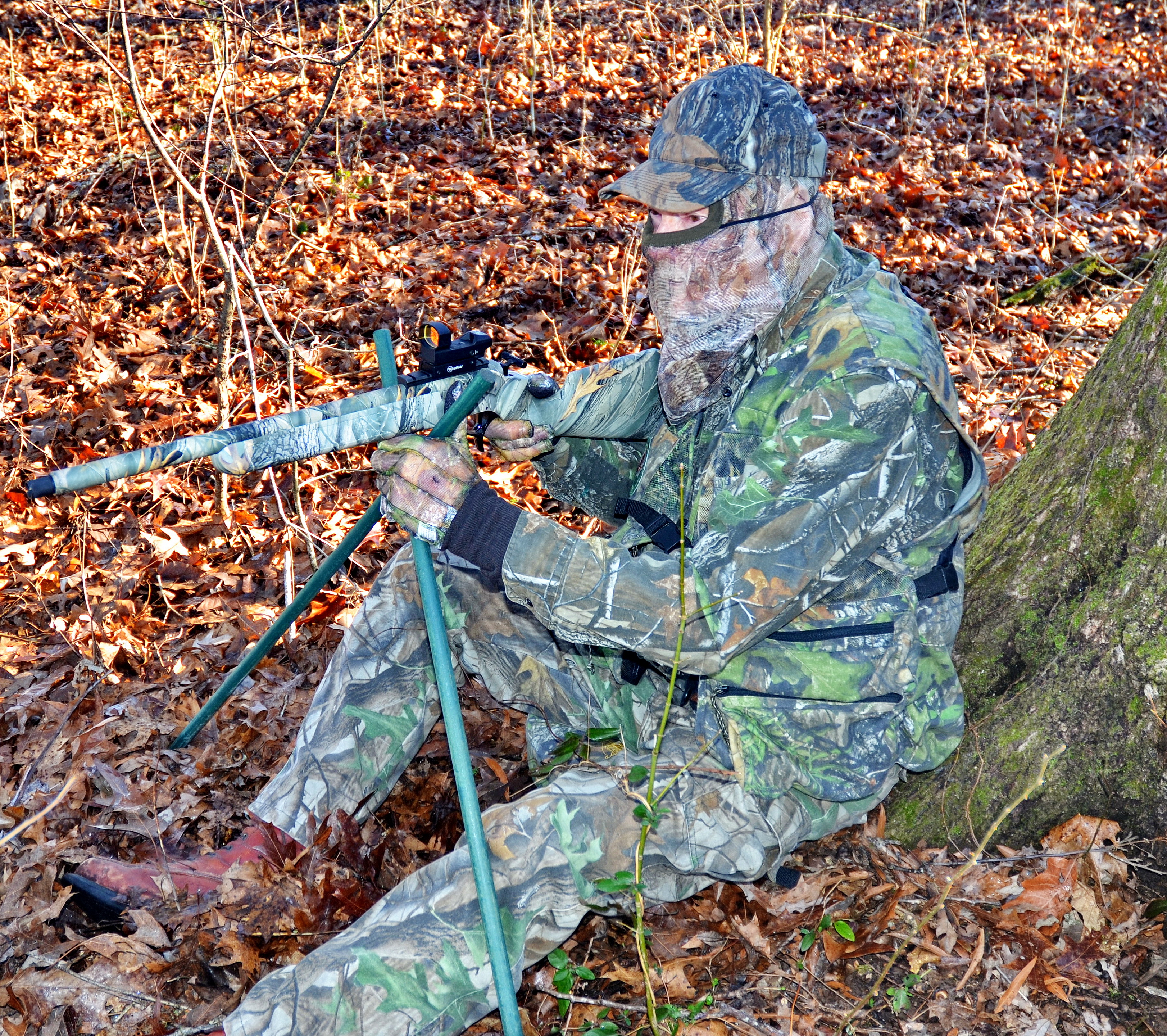 The second part is to equip your shotgun with sights that enable you to line up the gun for accurate shooting regardless of position. A shotgun with open, rifle-type sights can be an easy solution. A number of ribbed shotguns have a bead at the muzzle end of the barrel and a bead at the midpoint of the rib. These can be useful in aligning the barrel properly; however, in my opinion, the best remedy to this problem is mounting a low-power shotgun scope or an electronic or lighted dot optic on the turkey gun. This makes barrel alignment easy and assures that you remember to sight on the gobbler’s head and neck. If using optics, they need to be taken to the range and sighted-in at likely shooting distances. They don’t come sighted-in as some think. 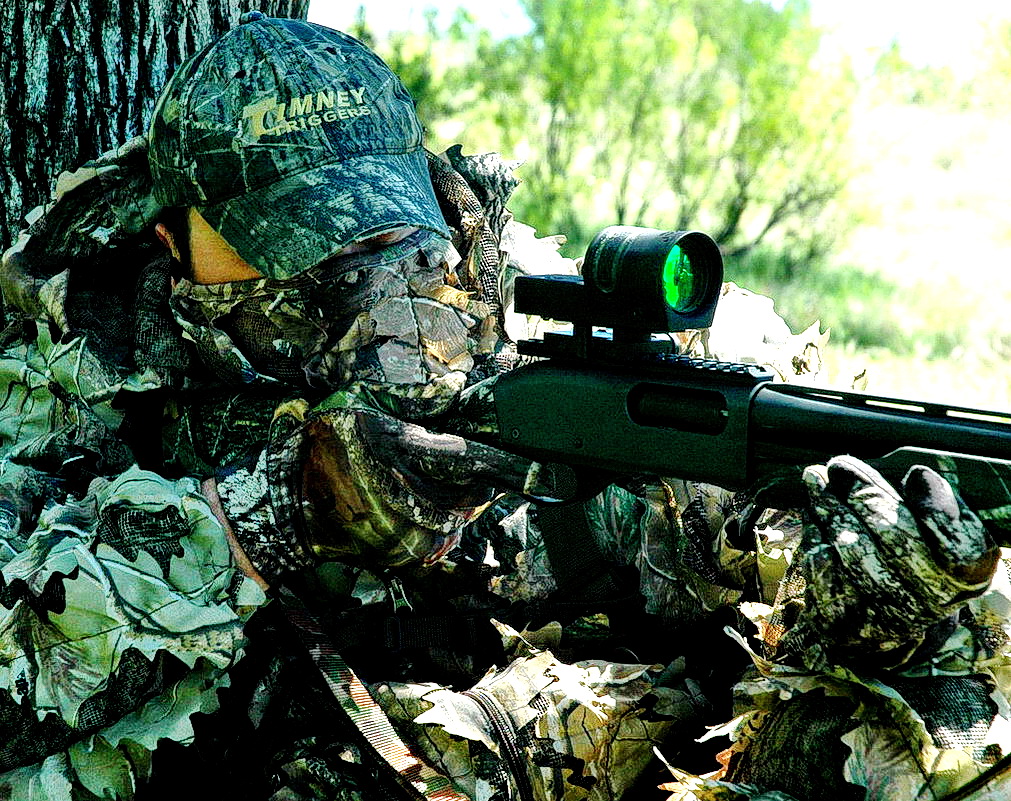 Once you have a shooting rest and a sighting device has been added, you need practice shooting your turkey gun with a turkey load at a turkey head/neck target from a sitting position until you master it. Far too many turkey hunters add sights to their shotguns and never practice. They are shocked when a miss occurs.

Go to your shooting range and set up a life-sized turkey head/neck target. Go back 40 yards and get into the sitting position you normally use when turkey hunting. Put on your head net and gloves. This adds realism to the practice and teaches you how to shoot when wearing them. Now, using your favorite turkey load, shoot the target, using your shooting rest. Evaluate the results. Did you put a dozen or more pellets into the central nervous system? 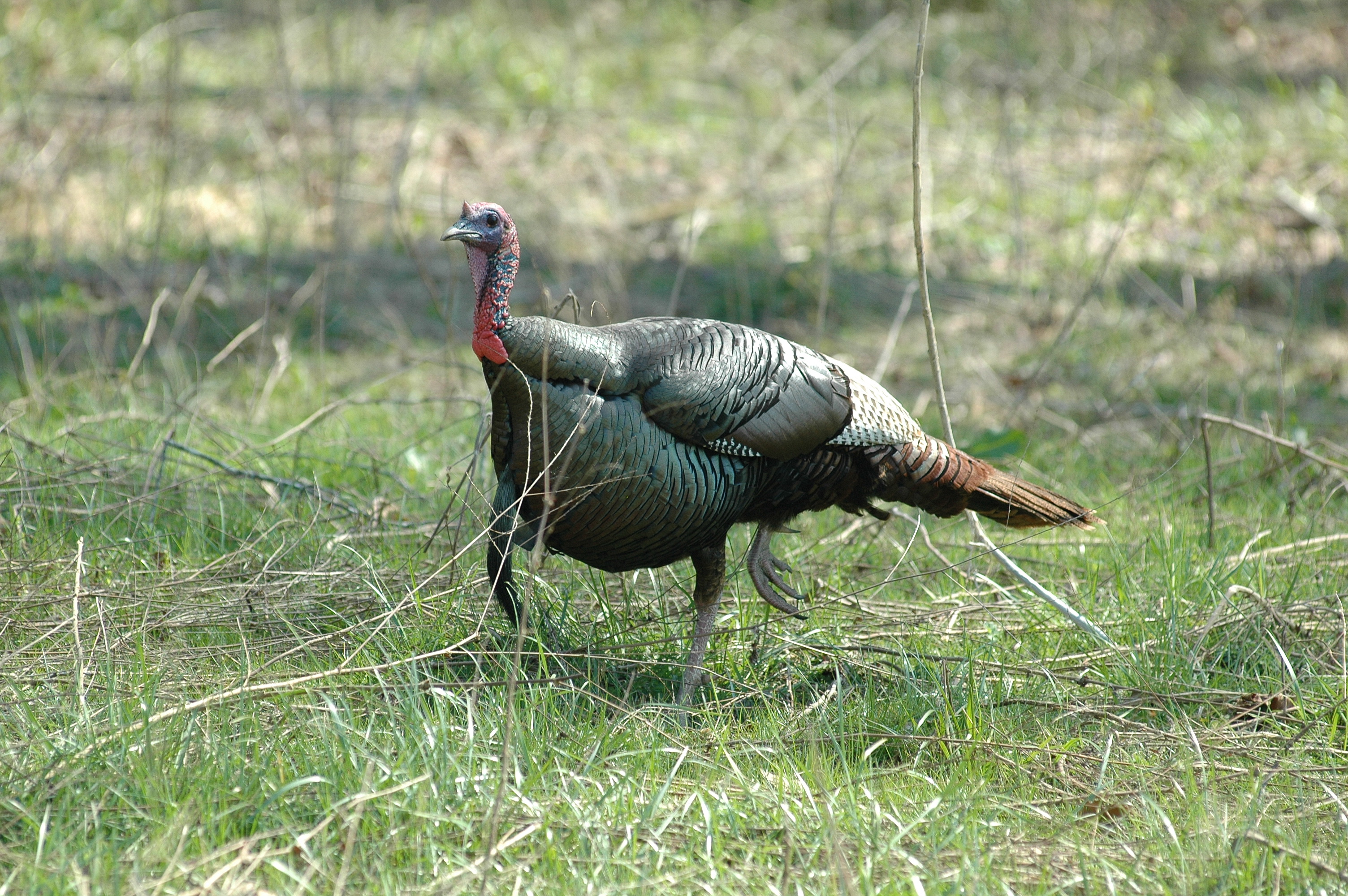 Move to 30 yards from the target and do the same thing again. This time, try a shot after sitting still for 30 minutes. Practice using your turkey call during your wait to learn to use your shooting rest to support your shotgun during this long period. Notice how much more difficult the shot is after you’ve been sitting for a long period.

Move up to 20 yards, repeat the exercise. It’s easy to miss a gobbler’s head and neck at this distance due to the tightness of the shot pattern.

Keep practicing until you can make each shot to your satisfaction. It may take longer than you thought. The combination of using a shooting rest, sights on your shotgun and the actual range practice from the awkward sitting position can make you a much more successful spring gobbler hunter. 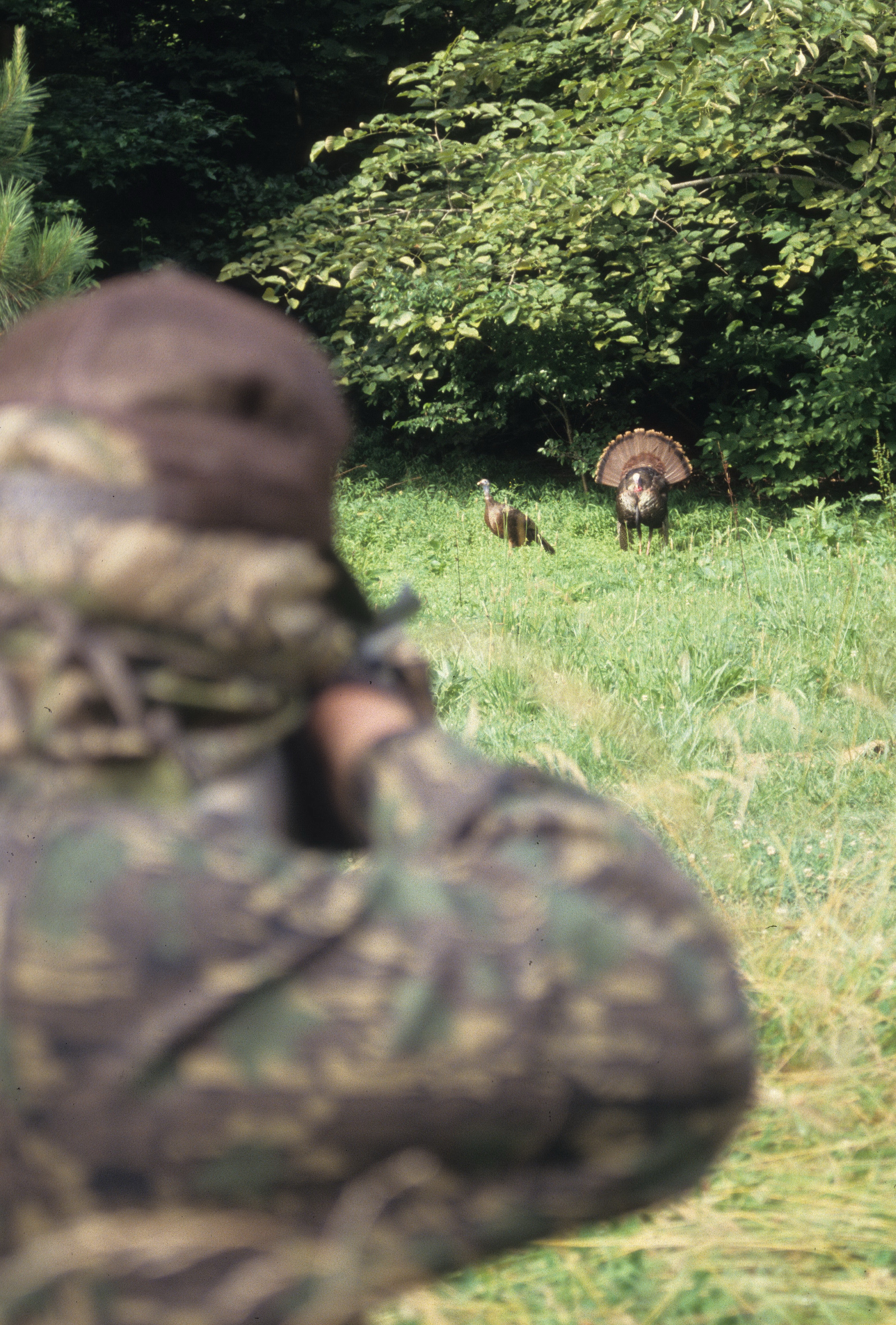 (When shooting from a poor position, the front bead may be on the tom’s head but the stock may be low, resulting in a high miss.)

— J. Wayne Fears
Article Categories
On the Hunt
Before the Hunt
Latest Articles