The Realization of a Dream

I lost my father to cancer when I was eighteen years old. He was my best friend and my guiding influence growing up. My dad taught me how to hunt and ignited a fire in me for the outdoors at a young age. I harvested my first animal when I was five with my father by my side. It was only a squirrel, but I can still remember standing under that big oak tree celebrating with my dad.

I always dreamed that God would one day bless me with children so that I could pass on the lessons that my dad taught me. When my wife became pregnant with our first child, you could say I was a little excited, and as fate would have it, my son was born on my father’s birthday in October of 2011. We named him Douglas after my father.

Since Douglas was old enough to talk, he’s loved animals and the outdoors. He’s a daddy’s boy and generally wants to be with me wherever I go. I started letting him tag along with me on hunting trips when he was three years old. He’s a very patient student for his age, and he takes direction very well.

As 2018 rolled around, Douglas came home from school one day and told me that he had made a New Year’s resolution. I was intrigued to hear what my six year old wanted to improve upon in the New Year. “Daddy, I want to learn how to turkey hunt,” Douglas exclaimed.

From that moment, I started thinking of how I could make Douglas’s New Year’s resolution a reality. For his birthday in October, I had a single shot 410 customized to fit him, and we had been practicing the basics of shotgun use and safety for a couple months. I eventually let Douglas start shooting turkey targets, and we continually went over the proper placement for a lethal shot on a big gobbler.

At the end of February, I was catching up with a good friend, Phil Rawlings. He had been asking me for years to come up and turkey hunt with him on his farm in northern Kentucky. I had never been able to make the trip work out, but in the days after our conversation, an idea came to me. I called Phil back a few days later and asked him if Kentucky had a youth turkey season. Phil quickly responded that there was a two day youth season that started on Saturday, April 7. I asked him if I could take him up on his offer for a turkey hunt but with Douglas being the hunter instead of me. Phil quickly said yes, and I made travel arrangements.

Phil picked us up from the airport on the afternoon of Friday, April 6. We were greeted by cool temperatures in the mid-fifties. We quickly dropped our bags off at Phil’s house and headed to his farm for an afternoon scouting session and fishing trip. Phil had been monitoring the turkeys for a few weeks before our arrival, so he had a pretty good idea where they would be spending time. He set up a blind for us to hunt the next morning in an area where he had trail camera pictures of turkeys almost every day for the last week. We didn’t have any luck fishing that afternoon, but we did get to see several mature toms strutting around in a clover field with a small flock of hens.

The next morning we awoke to really cold temperatures for two Louisiana boys. Overnight, the temperatures had dropped into the mid-twenties and snow had begun falling. For Douglas, it was magical.

After a quick stop for doughnuts, we made our way out to the farm. We parked the truck, grabbed our gear quietly, and started the slow walk to our morning post. We arrived at the blind under the cover of darkness. I got everything situated in the blind while Phil put out a strutting jake decoy along with a hen. As we all got positioned in the blind, turkeys started to gobble on the roost a few hundred yards away. The look on Douglas’s face as he heard his first turkey gobble was priceless.

The turkeys gobbled consistently on the roost over the course of the next twenty minutes, but once they hit the ground, they went quiet. We sat in the blind for the next half hour carefully watching our surroundings and listening attentively.

As Douglas and I practiced aiming at our decoys, I heard a gobble directly behind us. I quickly turned to Phil and signaled that I had heard a turkey. Phil had not heard the gobble so I showed him the general direction of the gobble. A couple minutes passed, and the turkey sounded off again. This time he was quite a bit closer than the first time I heard him.

Phil pulled out his slate call and softly yelped. Before he could finish a complete yelp, two toms gobbled back even closer. I leaned over to Phil and whispered, “There’s more than one bird, and they’re headed this way.”

I quickly positioned Douglas behind his gun and steadied him on the Caldwell Fieldpod that it was resting on. The birds gobbled again, and this time, they were very close. As they approached from behind us, I could hear the pair spitting and drumming as they walked up the road in our direction. Douglas’s breathing was getting heavier as the birds approached, so I tried to calm him down.  It was a tough task, though, as I was breathing hard myself.

Phil turned to us and said, “I can see them. They’re right there.” I still couldn’t see the birds, but I told Douglas to get down on his gun. He readied himself for the shot, and out of the corner of my eye, I saw the first gobbler come into view. “There he is. Take your time,” I instructed Douglas. At this point, the birds were at about eight yards and walking slowly toward the decoys. “Whenever you’re ready, buddy. Put it right on his neck,” I softly whispered to Douglas. BANG, sounded the gun. 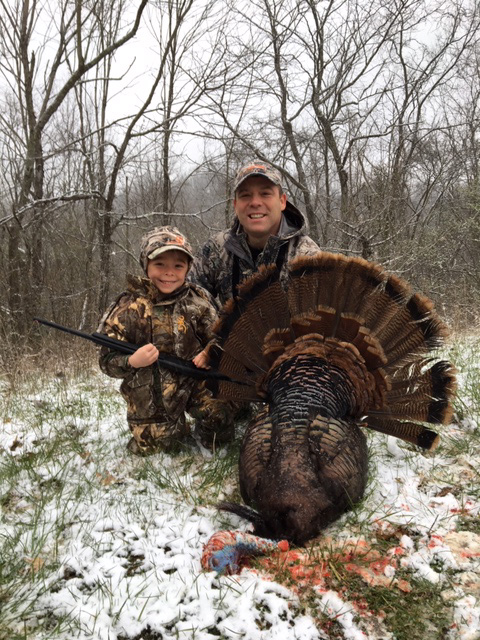 As I looked out onto the snow covered ground, I could see the big tom flopping. I let out a few celebratory screams with Douglas and quickly made my way out to the turkey. Douglas and Phil followed me out of the blind. I grabbed Douglas, gave him a hug, and celebrated with him. My mind immediately went back to celebrating with my dad under a big oak tree over thirty years earlier. 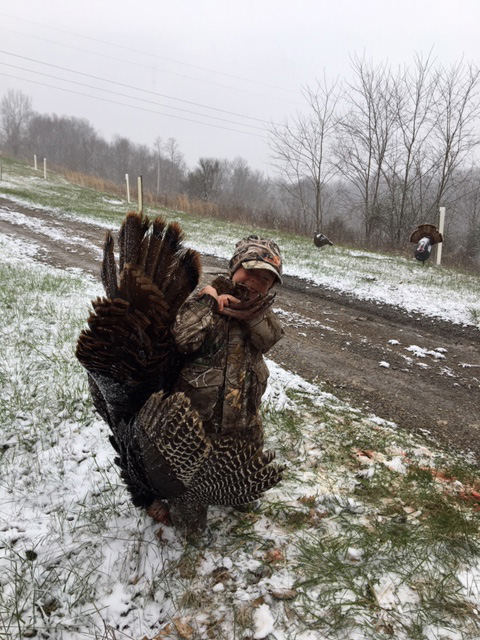 Douglas was amazed with everything about the turkey from his wattle to his spurs. The tom was a big three year old. He had a 10” beard and 1-1/8-inch spurs, but those measurables had nothing on the experience. The hunt was the realization of a dream for me, and a memory that neither Douglas nor I will ever forget. I hope someday I’m around to watch Douglas take his son hunting and continue the legacy that my dad introduced to me.