Riparian, or streamside, habitat is vital to healthy turkey populations in arid regions like eastern New Mexico and the Texas Panhandle.

The grove of cottonwoods stood tall like skyscrapers on the bald prairie. Some of the tree trunks were as big as tractor tires. Stubby cedars, cholla cactus, yuccas and prickly pear cactus surrounded the gallery of mature trees. It looked more like pronghorn antelope country than turkey country. I was on the plains of northeastern New Mexico where large trees are rare. A winding, blue ribbon of life meandered near the big trees. Fenced off from cattle on most of the creek, the water was clear and cold.

At the base of that cluster of old trees was a lifetime of turkey droppings. In some places it was a foot deep. Spent feathers were everywhere. When the rancher showed me that spot for the first time, my jaw dropped. Even a rookie turkey hunter could appreciate the significance of that historic roost site. The rancher said turkeys had been roosting there since he was a kid. I staked out a pop-up blind 200 yards from the tall trees and returned in the dark the following morning.

As the morning started to wake, black, pear-shaped silhouettes came into focus in the distant trees. Turkey chatter echoed down the creek channel. Flapping wings meant the birds were on the ground. A long 10 minutes later, a flock of four longbeards following two dust-colored hens came over the creek embankment close to my right. Each Merriam’s gobbler was fluffed up as big as a washing machine. With my bow at full draw, I waited. When the angle was right on the closest gobbler, I dropped the string. The hefty New Mexico gobbler had a thick 9-inch beard and spurs as sharp as an ice pick.

Since that memorable morning hunt several years ago, that river bottom has produced other exciting hunts. Bleached elk and deer sheds prove the riparian strip benefits hooved game as much as wild birds. Each spring, we only take a few gobblers from that ranch, knowing how special that location is and wanting to preserve it for many years to come. If not for the water and the mature trees, there would be no turkeys. 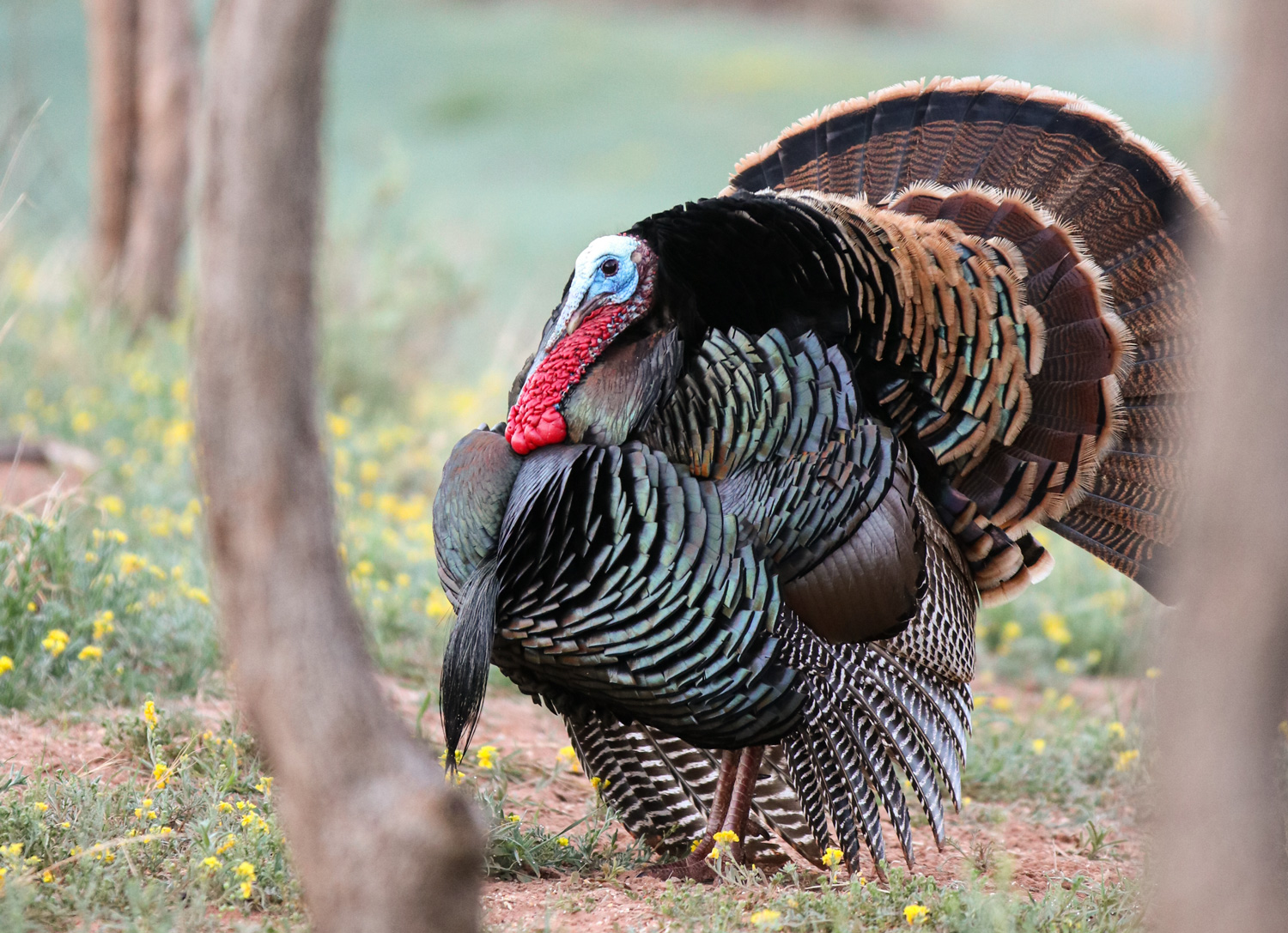 A wild, healthy river bottom is rich with wildlife. For turkeys, the old trees serve as safe roost sites and the water serves to quench their thirst. Water is also important so turkey hens can get their bodies and wings damp in times of excessive heat, then sit and cool their nest. The fertile soil along a river grows green grass and weeds. Turkeys eat grass and weeds. At the edge of the water, insects thrive. Turkey poults eat insects. Where grass and brush are allowed to grow thick, turkeys will nest. Deer benefit, too. The same grass and thick brush serves as excellent fawning cover.

Another place, closer to my home, reminds me of that wild country in New Mexico. That place is my family’s ranch, Rim Ranch, south of Amarillo in the Texas Panhandle.

The property was bought by my grandfather, Guy Owens, in 1948. The land is diverse with native grasses, crop fields and windmills on top. Sitting on the edge of the scenic Palo Duro Canyon, the other half of the ranch includes steep cliffs, twisted juniper trees and a winding, flat river bottom. The colorful canyon is a natural masterpiece. Red cliffs, orange mesas and vibrant purple and white colors are displayed in the clay soils. Wildlife is diverse. Mule deer and aoudad sheep roam the cliffs. By the creek, white-tailed deer, wild hogs and Rio Grande turkeys live under cottonwood trees. Like the ranch I hunt in New Mexico, it is a desert environment rescued by a ribbon of blue, life-giving water. The river is called the Prairie Dog Town Fork of the Red River.

My family has strived to be good stewards of this place for three generations. Part of that includes limited cattle grazing. In times of drought, we have no cattle. Since the fall of 2018, we have not had a single cow on the ranch because of drought conditions. It has not been easy. Extra income from a cattle lease would be nice, but we try to look at the bigger, longer-term picture. Overgrazing damages the plants, damages the soils and ultimately hurts the wildlife. That’s why, especially on the creek, even in wet years, we never allow cattle grazing. That riparian strip is guarded to ensure ample fawn and nesting cover. A conservative harvest of bucks and gobblers is also part of the plan. We control predators and the invasive feral hog population. We also try to keep a balance on the free-ranging population of aoudad (Barbary sheep) with the native big game. 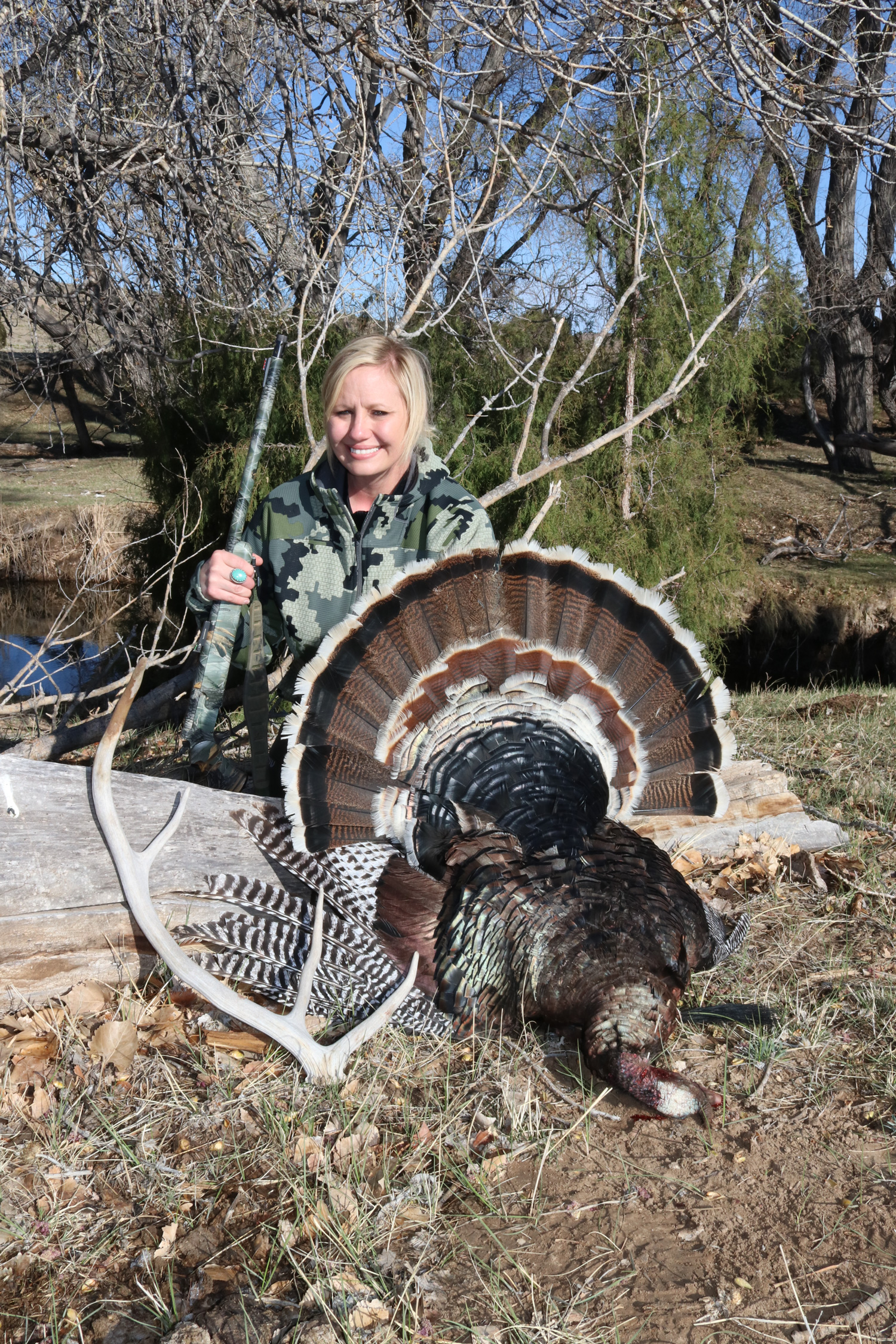 Recent years of drought have killed some of the mature cottonwood trees. That is concerning. Planting young cottonwood trees, in cages shielded from browsing deer, will start the slow process of replacing old roost trees. I asked Texas Parks and Wildlife Biologist Todd Montandon for his thoughts on the turkey habitat in the Palo Duro Canyon during these dry years.

“Panhandle turkeys thrive in areas with good interspersion of open and wooded areas,” he said. “Roosting, nesting and brooding sites also have to be adequate to sustain a population. Because turkeys can move long distances, they can have home ranges up to 4.500 acres, so areas with big swaths of continuous habitat are most likely to hold birds. Available water and suitable roosting sites are the biggest limiting factors for turkeys in the Panhandle.

“In Palo Duro Canyon, Rio Grande turkeys tend to be found along riparian areas with large trees like cottonwoods, netleaf hackberry and western soapberry providing roost sites. A turkey’s diet is mostly green grass growth, invertebrates, mast (fruits and nuts) and forbs. During normal years most of their diet requirements can be met here, but in dry years like 2020, they may have to venture further to find food, water and nesting sites. Dry years can lead to lower brood success because moisture is needed for insect production, which is the food source for poults during the first several weeks of their life.” 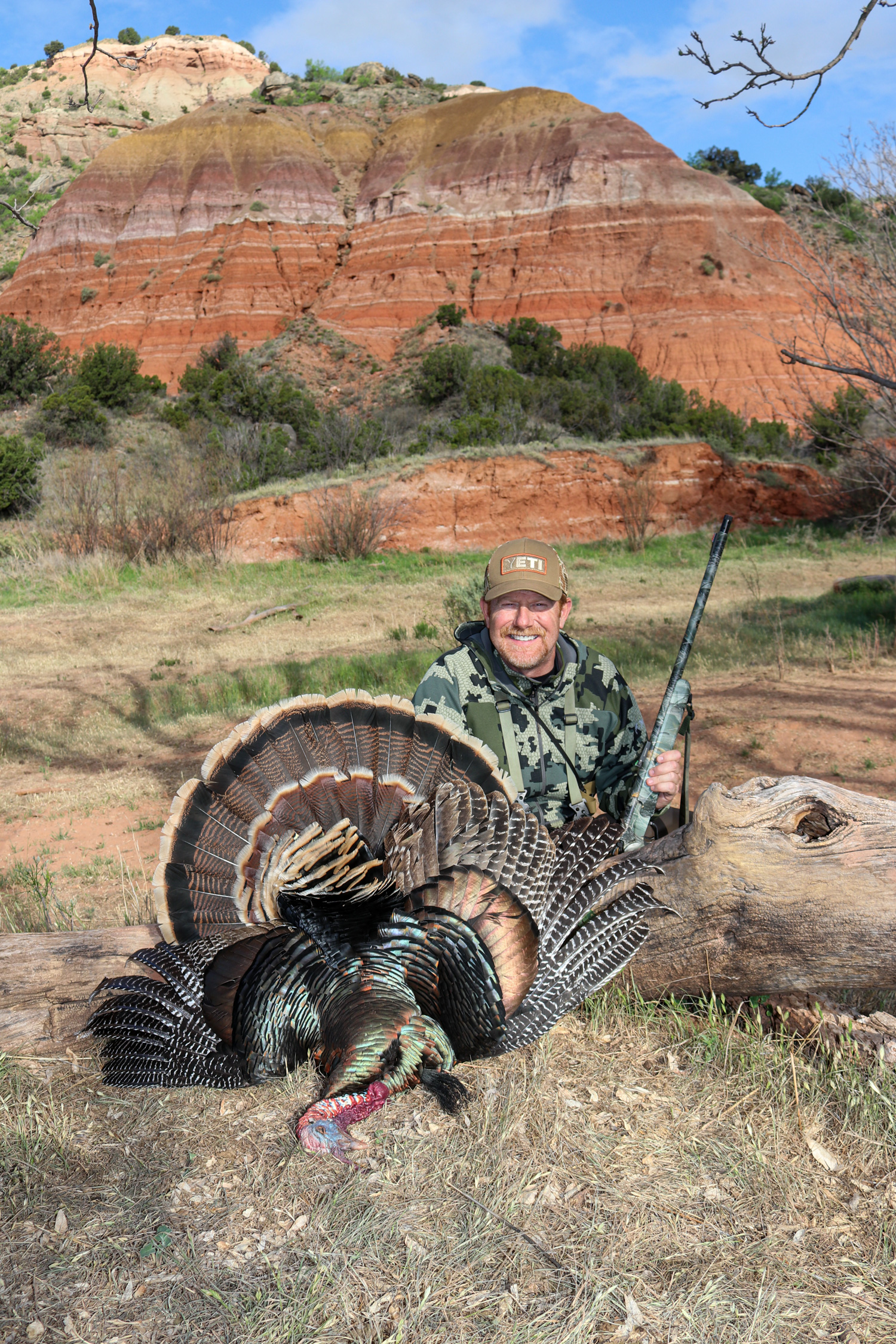 I love hunting wild turkeys in unique landscapes. Wild places like the badlands of eastern New Mexico and the canyons of the Texas Panhandle. In both locations, healthy river bottom habitat is the key to keeping the turkey tradition alive.